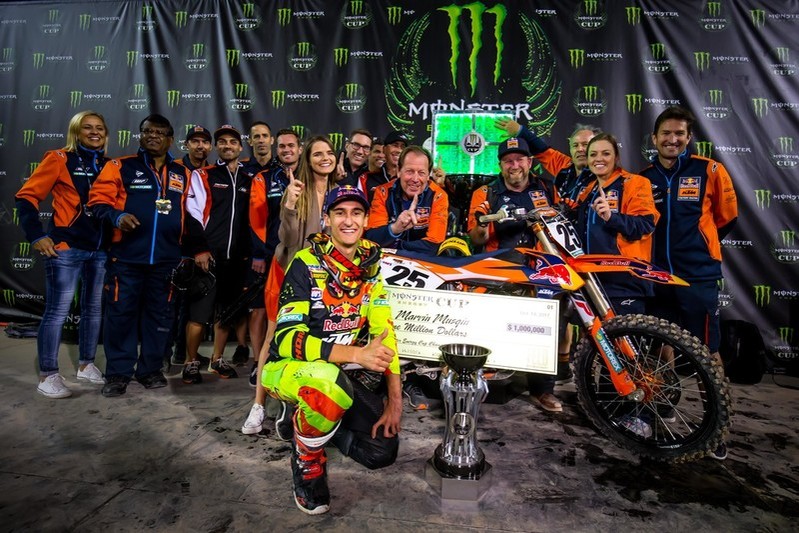 At the recent Monster Energy Cup – the world’s richest motorcycle race – Marvin Musquin gave the clearest indication yet from ten years in orange that he is ready to step up and lead the Red Bull KTM team to more glory in the stadiums of North America. 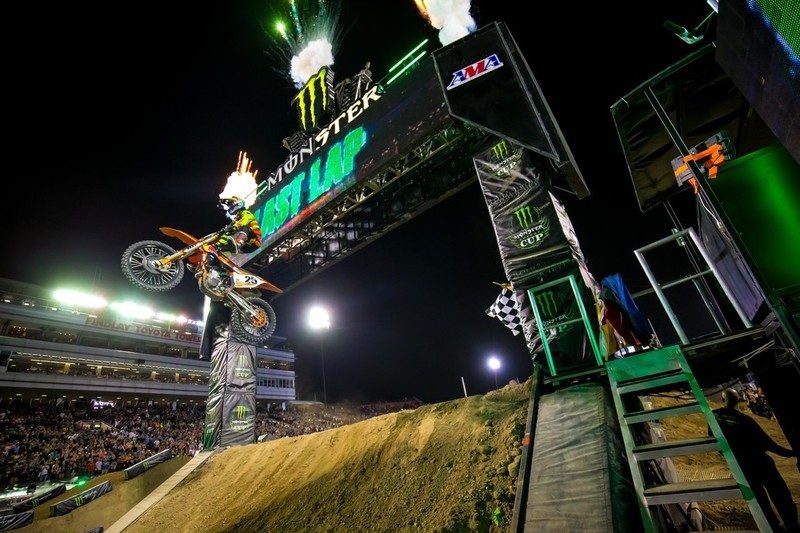 Ryan Dungey left some big boots in the workshop of Red Bull KTM in Murrieta, California. The recently retired #5 won three AMA Supercross World Championships in what is the second most-watched motorcycle racing series in the world. Marvin Musquin will be hoping to place the vacant footwear in a locker somewhere and buckle his own in earnest for what will be his third season with the KTM 450 SX-F once the new contest starts at Anaheim on January 6.

The Frenchman will soon toast a decade as a Red Bull KTM athlete and his recent success by winning the Monster Energy Cup in Las Vegas – just the second rider in the seven year history of the invitational fixture to claim all three ten-lap Main Events and become a millionaire in the course of one evening – was a potent sign that the 27-year-old is looking to wear Dungey’s 2016 crown and add the accolade to his 250 SX title and two MX2 World Championships.

“It makes me proud and happy to see that,” Marvin Musquin said at the Sam Boyd Stadium on his ten year-long tenure on KTM SX-F machinery and since he won his first world championship in 2009. “I want to thank Red Bull KTM and Pit Beirer because the way my career is going and to be able to keep on this team with the KTM 450 SX-F and fight for a championship is like a dream. To be in this position is awesome and I cannot see myself being anywhere else.”

Musquin is a wonderfully skilled rider, physically slight but with the ability to bend the motorcycle to his wishes and place those Pirelli tires on whatever inch of the roughest Supercross and Motocross tracks that lay ahead. “He can do some very technical things and in special places. He is maybe one of the best we have seen,” says KTM Motorsports Director Pit Beirer and the man who originally signed Marvin midway through 2009. “I have a close relationship with Marvin. He came over to KTM in special circumstances and to see him perform so well gives big satisfaction. I always believed in him and on good days he brought us championships but also dealt with some big injuries and had to make a series of comebacks. When he has confidence then in terms of technique he is such a good rider that he does some incredible things. In 2016 he made another step and gave Ryan some hard days in Supercross and it is not so easy to do at this level: I think we are ready for the time ‘after’ Ryan Dungey.” 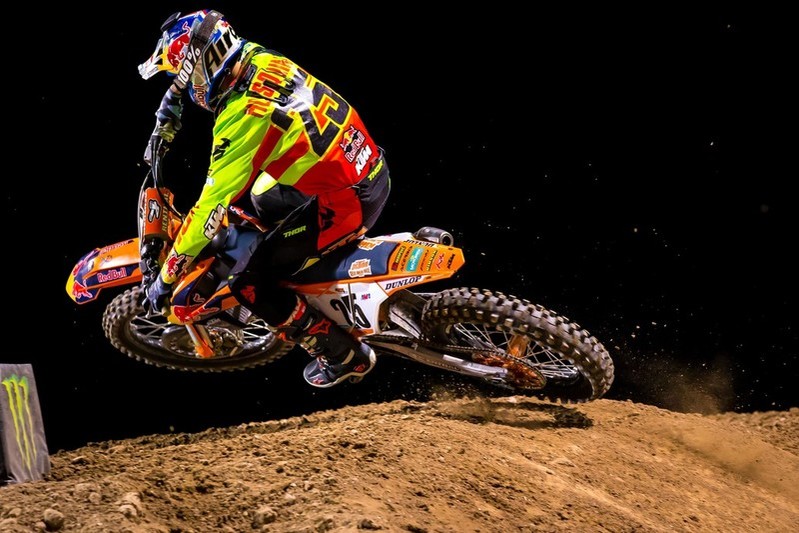 #25 may be looking ahead to a historic year and an authentic bid for 450 SX and one of the most prestigious titles in the sport, but his origins with KTM came after a fraught personal situation. The-then promising Grand Prix newcomer was in a desperate state to remain at world championship level and found a sympathetic and willing supporter in Beirer.

“That was the craziest story and I’m sure Pit will tell you,” he smiles now. “I’m glad we did that in the end and then moved to America. We had some struggles and we had some podiums but nothing like the results in GPs. I’m glad we made the move to live in America though and we stayed with KTM. Each season is not easy, Motocross is a tough sport but I’m living my dream of winning races on a 450 and I need to keep going and win a championship.”

“There was a lot of emotion at that time,” reflects Beirer. “He was in trouble; he had a ride but no money and was struggling a lot. To see him crying in front of me I had the feeling I had to help this kid but when I did so I had some parts of the industry against me. We even had a court case going on and the police even stopped us racing in Sweden! It was a ‘zero’ for that weekend but he raced the next and still won the championship that year. We stuck together in that time and it linked us strongly from that moment. We have a special connection and it is so nice to see when one of your kids develops like him.”

Through MX2, 250 SX & MX, 450 SX & MX, Motocross of Nations, Bercy Supercross, Red Bull Straight Rhythms and Monster Cups, Musquin has not failed to show his class. In Las Vegas he not only announced his readiness to be in contention for the seventeen-round Supercross campaign but also achieved the remarkable feat of swelling his bank balance with the largest single pay-out in motorcycle racing. It was a small milestone. And an exciting one.

“A lot of people were watching and to see one person winning a million in one night at a Motocross race is so unique,” he said that night at the Sam Boyd Stadium. “I think we got a lot of views and people will be talking about it for sure, so that’s good for the sport. When I crossed the finish line and met the team we were all just laughing like crazy; it was like ‘are you serious?!’ It was like being at the casino and winning the jackpot! It was super-cool. Money is one thing and doesn’t buy everything but to be able to win tonight is super-special.”

‘Special’: a word that is hovering more and more around MM25 and seems set to stay.