In Autumn 2013, KTM launched a global competition with the main prize of a 1290 SUPER DUKE R. Four semi-finalists were eventually chosen from the thousands of entries received to battle it out for the ultimate prize in motorcycling; Matteo Bonamici, 35 (Italy), David Schoenhoff, 30 (Germany), Jay Marriott, 32 (Australia) and Baron von Grumble, 35 (United Kingdom) will do battle across the world in a unique, torque-laden fight.

Each of these four semi-finalists have now each been loaned a 1290 and over the course of the next few months will be required to complete a series of tasks and challenges. The rider who scores the most points from the various and sometimes unusual challenges will go on to claim the SUPER DUKE R as their own. There can be only one!

We caught up with all four lucky riders as they received the keys to their bike and before they took their very first rides on the unique, torque Beast 1290 SUPER DUKE R. 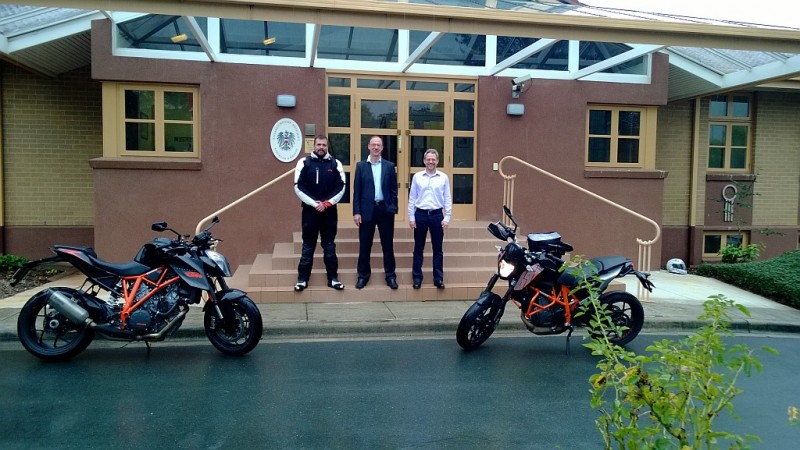 The handover for the Australian semi-finalist took place at a KTM dealership in Epping that included a show of the KTM stunt rider, Lukey Luke, who was also in attendance to perform the interview. At the same time, Jay met the Austrian ambassador Dr. Helmut Boeck  at the Austrian embassy in Canberra.

Lukey will also be part of this project with Jay, so together they are planning some funny stunts to produce some interesting photos, videos and content. We think that Lukey is only helping Jay as he wants the 1290 for himself!

Anyway, Jay Marriot arrived at the handover with his girlfriend who was riding his 690 DUKE. Take a look at the handover video that KTM Australia produced, here. Jay is very determined to win ‘his’ bike – this is a man who promised that he would quit his job and ride the 1290 around Australia long with getting KTM tattooed on his body if he was selected. Well, he already had the ink done (on his ass!) but we think he still has a job.

How do you like the bike?
“Love it; it’s awesome. Really good.”

What do you like most about the bike?
“I love the power, the style. Pretty much everything. This thing is just amazing.”

What are your plans with the bike?
“I’m going to hit the contest pretty hard, I think. I’m gonna hit the road as soon as we are done (the handover) and head straight to Canbera. Bit of a road trip up there and see some sights. And then bring it back tomorrow.”

Any last words before you will leave?
“Yeah, can I go now?” 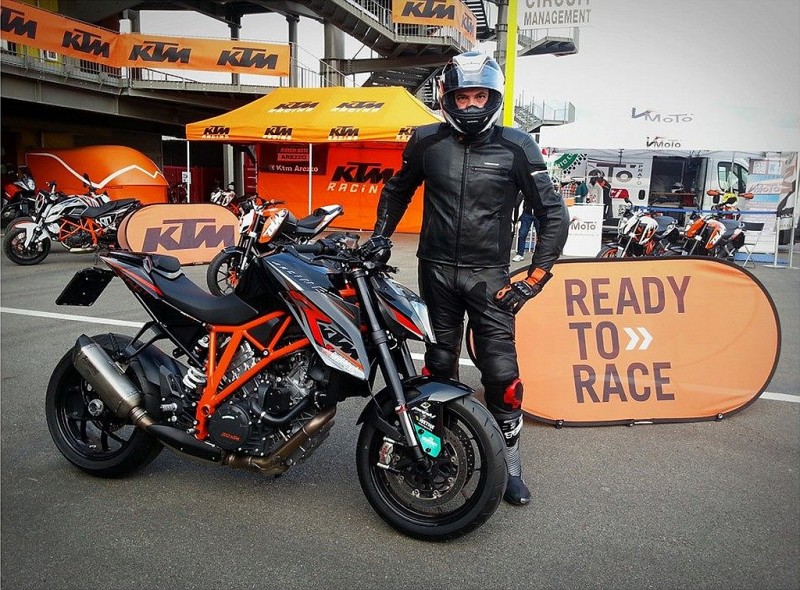 During the TNT event, KTM Italy had the chance to hand over the 1290 SD R fitted with PowerParts in the ‘Race style set-up’ to competition semi-finalist, Matteo Bonamici.

Matteo, who is well known in the bikers community, had the chance to share the “Beast” with Aldo Ballerini, head of editors at Motociclismo, to ride at the historic circuit.

They made a good job together for filming and photoshooting (on track and outside) and Ballerini was really nice when he decided to give some space to Matteo.

Matteo, how do you feel?
“I’m really glad and proud to have been chosen for this competition. I cannot deny a certain emotion in having a chance to ride for several months one of the most popular bikes of the moment.”

How do you like the bike?
“I must say that the racing version has an incredible charm, especially the line and stickers that exalt the racing spirit. The short support license plate that enhances the shapes and Akrapovic exhaust. This is my favorite setup, even though I’d like two side bags, just to underline the versatility of the SD R.”

What do you like most about the bike?
“I really like the technical equipment, an engine that promises on paper mind-boggling numbers, and the suspension and brakes at the top and last but not least a unique appearance. I like it so: compact and essential substance. The riding position is much more convenient than what you expect.”

What are your plans with the bike?
“I hope to do a lot of race track in order to harness the power of the Beast and see what it can safely do, but of course in the same way I hope to enjoy the riding over the most beautiful roads in Italy and in other countries I live close to.”

Any last words before you will leave?
“Well I hope it is the beginning of a great adventure of miles and fun and who knows… Hopefully to continue to enjoy the riding after the competition :)” 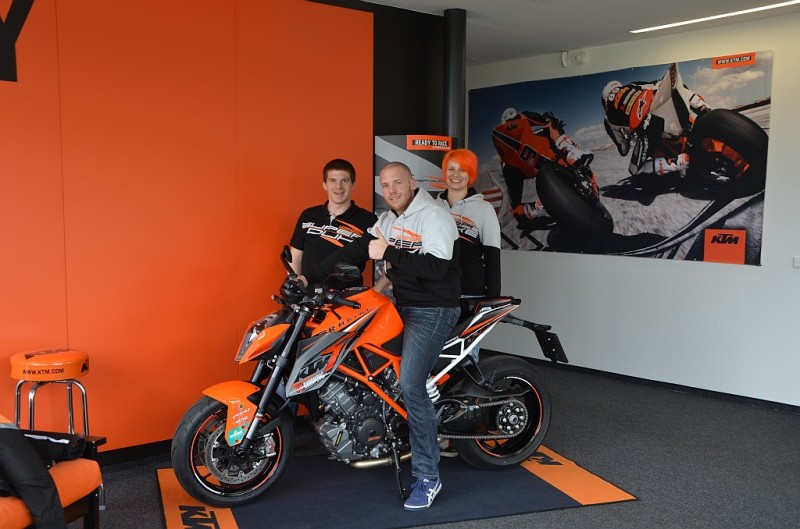 Over in Germany, the 1290 was handed over to David at the KTM subsidiary where he was able to take a full tour of the operation of how KTM is directed in his home country.

Part of the tour included the main workshops which gave David the chance to go flat-out on the SUPER DUKE R in top gear – on the company Dyno!

David had the chance to get to know the KTM staff over lunch and discuss the challenges ahead. Very determined to win this bike, he leaves KTM Germany with the ambition to reach the 1290km challenge in the first day.

David, how do you feel?
“Great feeling after taking seat on the 1290 SUPER DUKE R. After six weeks of waiting and sleepless nights today is the day I can bring my DUKE on the street.”

How do you like the bike?
“It is the first bike where I can´t find anything which bothers me. The first impression is overwhelming. Nothing you can compare to the pictures you can find in the internet.The bike looks so aggressive that you know, this bike must have enormous power. I have always liked the KTM orange combined with black and white.  A very stylish look.”

What do you like most about the bike?
“Although I haven’t ridden the bike yet, I am looking forward to ride a bike with a lot of power and a comfortable sitting position. I am a big fan of naked bikes and have ever been waiting for a fast and comfortable bike.”

What are your plans with the bike?
“I will ride a whole summer with a lot of variation. Track days. Small daily rides in the mountains with friends. Big trips combined with holidays, maybe in Italy or Spain.”

Any last words before you will leave?
“Thank you KTM!!! God bless the DUKE!!!” 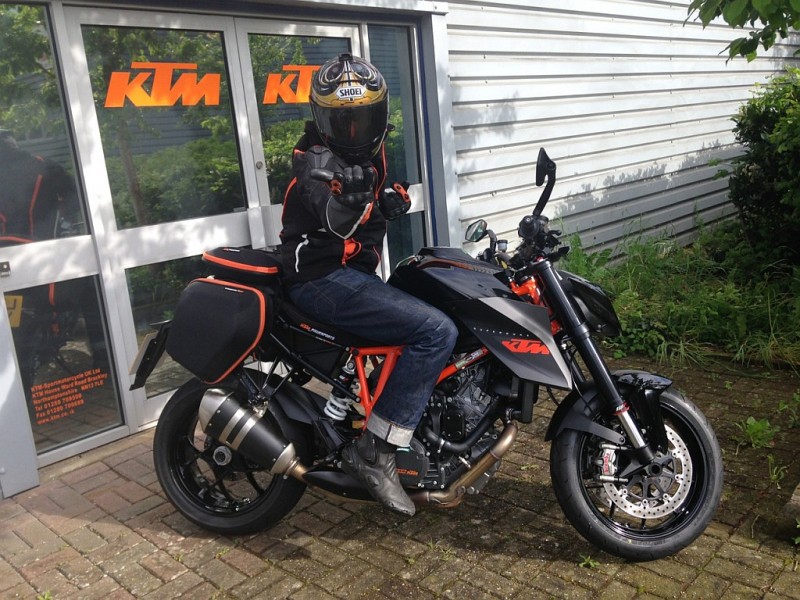 The last to receive his machine, Baron has some catching up to do. The weeks spent waiting for his bike has seen the prolific YouTube vlogger continuously looking and dreaming over the PowerParts catalogue and also dropping in to see the KTM UK events truck at the first round of British Superbikes at Brands Hatch to try out a 1290 SUPER DUKE R.

On arriving at KTM UK in Brackley, close to the Silverstone Circuit, Baron was introduced to the KTM staff and took a tour of the workshops. He became frightened when he saw a 300 EXC – the all-conquering endure machine – so we quickly ended the tour.

Baron has many ideas what he wants to do with the bike, but as many are illegal we will have to keep a close eye on him.

Mr. von Grumble, how do you feel?
“With my hands, usually. But in respect of this, very privileged. I feel like the guy in the strip club who got the hot chic and all my mates got the ugly munters.”

How do you like the bike?
“It’s alright. Ha ha, I genuinely like it. I’m pretty much used to sports bikes but I’ve read that the torque on this thing is on another level. I’ve always enjoyed having a throbbing beast between my legs.”

What do you like most about the bike?
“That it’s not mine so I can abuse it like its supposed to be abused.”

What are your plans with the bike?
“Needs an Akrapovic exhaust – I did ask KTM very nicely, but they ignored me ;)”

Any last words before you will leave?
“Farewell. Tell my family I love them.”