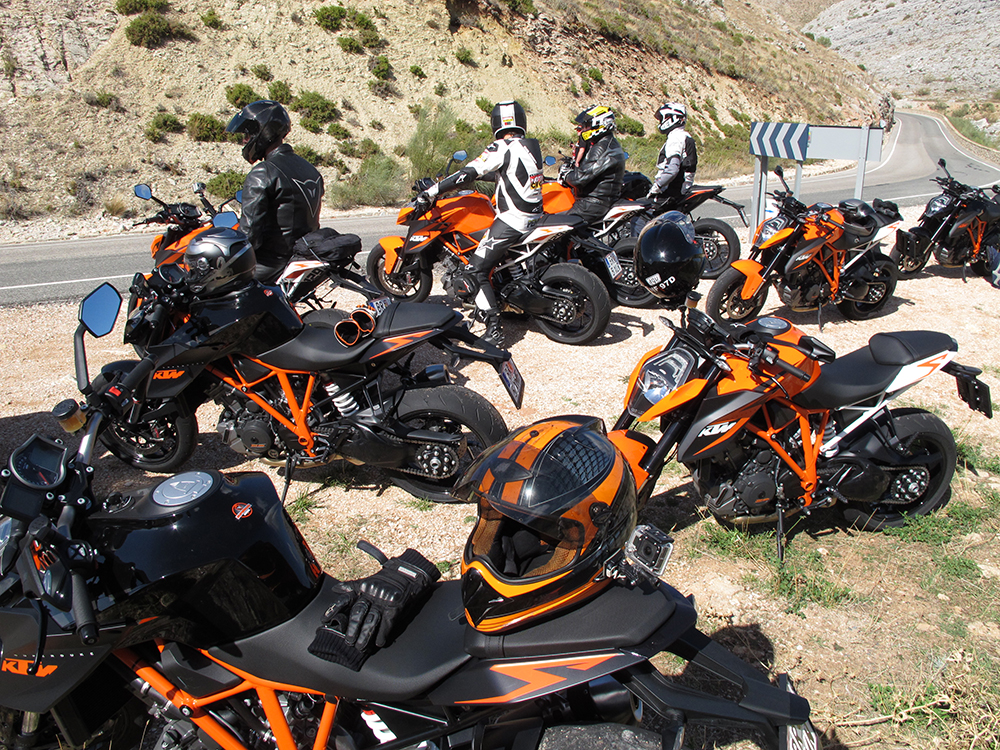 Bike journalists from all around the world travelled to Spain to test the new KTM 1290 Super Duke R. We joined in one of the groups and grabbed some opinions and verdicts 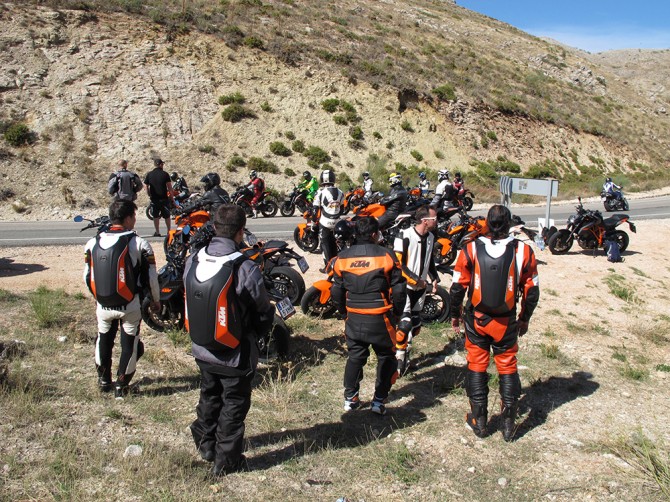 Gavin Morton/Bike SA/South Africa/personal bike: KTM 1190 Adventure R (plus a couple more)
“For me the 1290 is an unbelievable bike. It was labelled ‘Beast’ as a concept and indeed it has lots and lots of horsepower, but it is usable and everything works so well together, also the electronics. The riding position – I am a tall person – fits well. Many other bikes on the market it seems cater only for small people. The Super Duke R is a very user-friendly, incredible.”

Feloukas Athanasios/MOTO MAGAZINE/Greece/personal bike: none at the moment, just test-bikes
“I enjoyed the 1290 Super Duke R, it is really fast and the power is controllable. You can ground the footpegs a little easily, but it’s still okay. In the beginning I though the front brake was harsh but after 20km it settled and was perfect. Apart from that, I could not find anything wrong, the bike works really well. We had sufficient time to test everything and rode really fast and on slippery roads too. I had some slides but still very controllable, so the traction control works perfectly. The ABS also; I had two moments to test it really hard. It is a light and agile bike.”

Barkin Bayoglu/Freelance journalist (Autonews/Motobike/Motoron plus a TV-Show)/Turkey/personal bikes: Honda CBR919RR and CBR1000RR, Kawasaki ZXR-7R, Yamaha Fazer 600, 50cc Simson Schwalbe, Honda XR50 and 3 Honda Vision Scooters, one of them converted into a Chopper.
“For me the Super Duke R is a pure form of motorcycle pleasure. It was everything Jörg Schüller (KTM Product Manager) promised us before the test ride; you can go fast if you really want to twist the throttle but you can also go at slower pace no problem. I was happy with the bike; it is flawless. Our test group was really fun, all crazy and lunatic people, so the bike somehow released the beast in us. For me KTM has finally transformed into a street bike company. The 1290 Super Duke R reaches the same level to what they have already released this year with the 1190 ADV and also the Duke 390.” 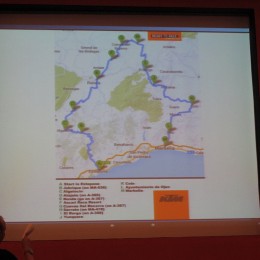 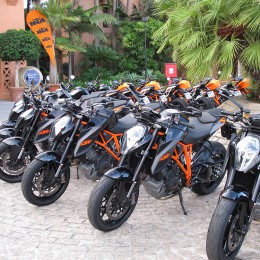 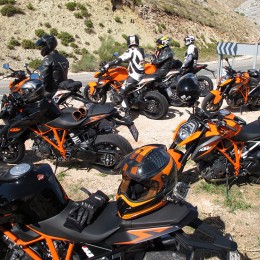 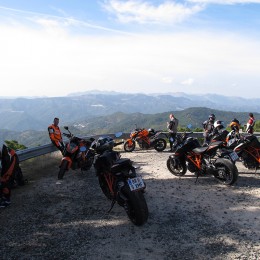 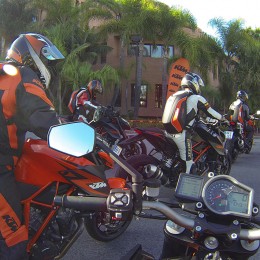 Pravin Menon/News Straits Times/Malaysia/personal bike: KTM 990 SM T
“Oh my god, the bike is amazing. It exceeded all my expectations. When all the hype showed up – the first prototype videos – I thought, ‘this thing is crazy’. And it is. Power all across the band but ready to use everywhere. I have crossed city sections in 6th gear. Also for overtaking I just twist the throttle and it accelerates, without shifting down. Unbelievable. Many KTM’s in the past have been crazy, like my own 990 SM T but this really surprised me. With the 1290 everybody was kinda anxious ‘Can I ride the bike?’ but it is so well managed. It does not scare you. It is a bike you can use. After riding the 1190 Adventure early this year I realized this is going to be the future direction. It is a more sensible approach. KTM has been known for aggression, craziness, and that hooligan element but now you get a bit of sensibility and safety. The 1290 Super Duke R is crazy, but something you can use nevertheless.”

Kenny Lee/MotoNation News/Malaysia/personal bikes: KTM 1190 Adventure and 990 SM T, a Supermoto and a Husaberg
“I am very surprised with the performance. The tyres and traction control worked very well. Especially on these kinds of road conditions because on some parts of the test loop with small lanes similar to Thailand you can feel it is almost oily. But still, the bike worked very well. Especially on the front the feeling is very good. The performance is amazing. Will people in Malaysia buy this? I think a lot of customers are waiting for this kind of bike. On our facebook site the interest is huge.”

Johan Ahlberg/Fastbikes.se/Schweden/personal bike: KTM Duke 200
“We rode a bit faster on the street but not over the limit like a maniac, so the bike is quite fast. The biggest impression is that it can be brutal, but surprisingly it is also very easy to ride. The old 990 is more aggressive and difficult to ride calmly, it also has more vibration. The suspension setting of the 1290 was quite comfortable, a perfect mix; sporty but settled. The brakes are brilliant. Is there anything I did not like? I can´t say anything so far. Not even the wind factor. It’s a naked bike, so I do not see this as a problem. Also ABS and electronics, everything is working nicely. It is pretty much my kind of bike.”

Roland Brown/Freelance/Great Britain/personal bike: Triumph Street Triple R
“Really enjoyed it. Just works very well. With all that noise about being a Beast and being fast and powerful, the most surprising thing is how controllable it feels. You might think a 1300cc bike with 180 horsepower is crazy and wheelies you into the hedge, but in fact it turns out to be an easy ride. It always helps you out. The handling is so good and light. The brake are perfect and the throttle response is clean. Nothing really to criticize. Maybe a little bit more wind protection would be nice because riding around in England you can get a bit cold. But it is a naked bike, isn’t it? The only thing that would stop me buying one is that the 1290 Super Duke R is just so powerful and fast if I own one my riding licence would be gone in half an hour.”

Bruno Gomez/Motociclismo/Portugal/personal bike: Triumph Street Triple
“Even though the design is aggressive and you think it is a harsh bike it turns out to be – I would not say smooth – but you feel comfortable on it. You feel like part of the bike. Suspension works nice, the brakes are perfect, you could not ask for more and the electronics lets you push the boundaries. Sometimes a little over what you should do but it always feels safe. I cannot find anything wrong. After one full year of waiting for it I was afraid that the final bike would be ‘too soft’ because everybody enjoyed that brutal side of the concept. Fortunately it’s not. It maintains that line and exceeded what I expected.”

Akarakit Worarojcharoendet/Superbike Magazine Thailand edition/Thailand/personal bike: BMW S1000RR
“After first looking at the pictures it seemed a very big bike but in reality it is more along the lines of last generation. The 1290 Super Duke R offers a lot of power and torque but it rides easy. The traction control is genius, especially on small slippery roads. It makes you keep calm, not worried.”

Alex Penklis/Australian Motorcycle News/Australia/personal bike: Yamaha R6 racebike
“It’s a fun bike. Plenty of power, also down low. A smooth engine. It handles well, traction control works good, just a good package. I also tried it on the track and the power never comes in too harshly and the brakes are super-strong and with good feel. The gearbox is smooth. This is a good option for the track as well.”

Kartikeya Singhee/Autocar India magazine, also TV-show and a website/India/personal bike: Hero-Honda 150
“I think it’s a beautiful motorcycle; a KTM flagship with lots of power, nevertheless is a capable machine for newbies. A new rider could get on and ride it without scaring himself. It has the right look and a lot of horsepower, it handles well and cruises nicely. The seating position is good. Only some small roads on our test-route were slippery, so it was difficult to feel comfortable. Another thing I took some time to get used to was the engine braking; it felt like the throttle stays open slightly. We will see some of these coming to India? Sure, big displacement motorcycles are selling better now in our country even if overall numbers are still small; about 1600 per year. And a large chunk of that are Harley Davidsons.”

Nikolay Bogomolov/Motoexpert Magazine/Russia/personal bike: Honda CRF 450 Supermotard and Suzuki GSX-R 1000
“It’s called the beast. Well, that fits nicely, but also it is also easy to ride. The first Duke had 120bhp and this has 60 more but it is packaged well. That was a surprise. However if you push, then it’s a real beast! I like this bike. I think it is one of the best in the class. Is there anything I would like to see changed? Maybe a separate regulation of the traction control and throttle response, because I always want a sharp throttle and full power, so I would love to be able to change the traction control behaviour. Everything else is okay. Will this sell in my country? Yes, Russian people love big powerful bikes, they are waiting for this.”