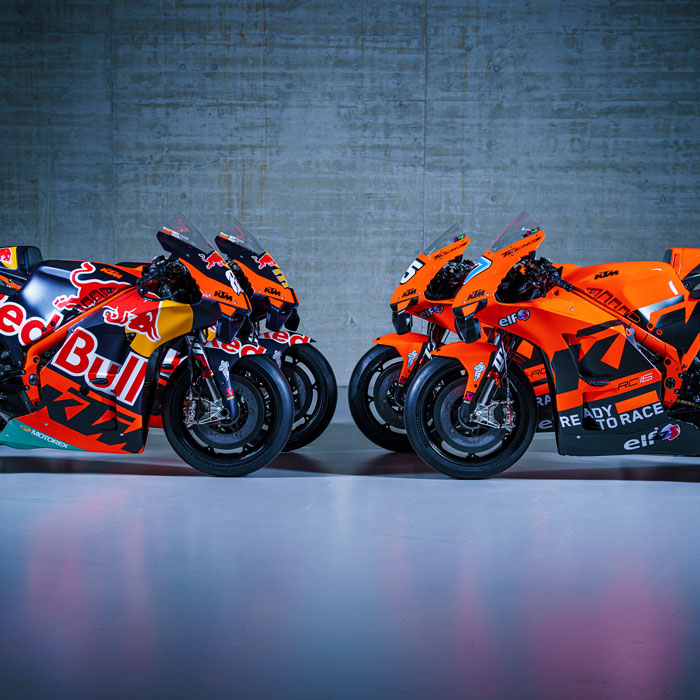 On March 6th 2022 MotoGP™ heads off into the warm Qatari night to open the 74th year of the FIM Grand Prix series. For KTM it will represent the sixth season on the MotoGP grid and with the RC16. Here are some facts and trivia about the Red Bull KTM Factory Racing and Tech3 KTM Factory Racing riders as the Losail International Circuit ‘launcher’ comes into view…

21 Grands Prix means that ’22 MotoGP is set to be the longest championship on record and perhaps the closest to ‘normality’ since the pandemic forced the sport to exist in a vacuum of restrictions and limited international scope. The series will travel from Argentina to Indonesia and plans to stop at two new circuits: Mandalika and KymiRing.

For the second year in a row Brad Binder and Miguel Oliveira will run in full Red Bull KTM colors together. They are the two GP winners for the factory in MotoGP to-date. In the pitbox next door, the promotion of 2021 Moto2™ world champion and runner-up, Remy Gardner and Raul Fernandez respectively, mean that Tech3 will field a full rookie roster.

All four riders have yet to reach their 28th birthday. Fernandez is the youngest at 21. In terms of geography, the line-up carries flags from Australia, Portugal, South Africa and Spain. All four racers bring a combined total of 48 Grand Prix wins across the classes. Who has the most? Read on…

1. With 17 Grand Prix victories and a 2016 Moto3 world title, Brad is the most successful rider currently in KTM orange, although he has just 2 wins in MotoGP compared to his teammate’s 3 and he stands equal with Raul Fernandez for the biggest amount of triumphs in one class: both Brad and Raul have won 8 times in Moto2.

2. Brad will be keeping a close eye on his rivals in 2022. One of them in particular, #40, is younger brother Darryn, who makes the hefty leap from Moto3™ straight into the premier class. Six of the 24 spaces in MotoGP are now filled by siblings.

3. Will Brad be betting on ‘5’ in 2022? The South African classified 11th in 2020 to be labelled MotoGP ‘Rookie of the Year’. He improved that ranking by five spots to 6th in 2021. If he moves up another five positions this season?

4. Binder will forever hold two special distinctions in KTM racing history. He gave the factory their first MotoGP GP winner’s trophy at Brno, Czech Republic in 2020. He then celebrated Red Bull KTM’s maiden success on home soil with his dramatic wet-weather gamble during the summer of 2021 at the Red Bull Ring.

5. Brad is a typical ‘no nonsense’ racer and a man who doesn’t have much time or interest for some of the frivolities around the sport. He can be quite fussy about aspects of his job though. For example, he’s picky with his race boots and doesn’t wear through many pairs, especially if he’s on a good run of form. “If I have something that fits and works well then I like to carry on with them; I think it is a bit of a superstition as well,” he says.

1. Miguel is only marginally older than his teammate but, like Binder, he has competed in at least five classes based around Grand Prix: the Red Bull MotoGP Rookies Cup, 125cc, Moto3, Moto2 and MotoGP. Oliveira completed 11 125cc GPs in his first world championship season in 2011 and totaled an impressive 44 points.

2. Oliveira was quick off the mark. He snared his first podium in only his second Grand Prix year in 2012 (it was at Catalunya, scene of his 2021 MotoGP win for Red Bull KTM) and went on to earn a trophy at least once in seven of the next nine years through the classes. Impressive stuff.

3. Miguel has been in a KTM racing team since 2015 and has competed in orange or with KTM machinery through Moto3, Moto2 and MotoGP; just like Brad Binder. Only one other rider in MotoGP retain this brand loyalty through the classes.

4. Miguel is the only father in the KTM group! The Oliveira family welcome daughter Alice last November making the 27-year-old the sixth ‘daddy’ on the MotoGP grid.

5. Oliveira needs two more wins to level with Brad Binder but Portugal’s only representative in MotoGP has two more trophies that his teammate: Miguel currently had 39 pieces of silverware on the mantelpiece.

1. Remy Gardner is not the first (or even the second) Australian to represent KTM in Grand Prix. That distinction falls to former world champion Casey Stoner, who claimed the factory’s first ever checkered flag when he won the 2004 125cc Malaysian GP. Other ‘Aussies’ include Arthur Sissis and Jack Miller who both rode for Aki Ajo’s Red Bull KTM team in Moto3. Remy is, however, the first antipodean to throw his leg over the RC16.

2. Remy will turn 24 just before his first MotoGP racing season and, unlike his KTM brandmates, he needed time to find his feet in Grand Prix racing. He fought his way through Moto3 and Moto2 for four full seasons (and a serious training accident that almost ended his career before it had started) before his natural speed and propensity was rewarded with a 2nd place finish in Moto2 in Argentina, 2019. Since then, his progress has been extremely swift.

3. Gardner claimed his 2021 Moto2 world championship despite two broken ribs. The Australian’s fifth and final win of the campaign came at Portimao, Portugal for the penultimate round of the season. He suffered a blameless crash entering the fast final corner at the Algarve International Circuit in Free Practice 2 on Friday but gritted his way through the distance on Sunday for the best and hardest race to-date.

4. Remy gives Australia two riders in MotoGP and will fire-up the KTM RC16 in Qatar having become the first ever racer from his country to own the Moto2 title. Gardner has spent most of his life in Catalunya and lives south of Barcelona. Naturally he is completely bi-lingual.

5. #87 will start 2022 MotoGP with a weakened right wrist courtesy of a winter training incident. The injury affected his pre-season testing plans in Malaysia and Indonesia but should hopefully not bother him too much in Qatar where he will use the RC16 to make his 116th GP start.

2. With #25, Fernandez has the ‘lowest’ race number from the KTM quartet. He first started wearing the digits during four GP appearances in 2018. He made his GP debut on a KTM in 2016 while still in the Red Bull MotoGP Rookies program and his 11th place at Valencia that year hinted at the potential ahead.

3. Fernandez’ younger brother, Adrian, is not far away. After a debut year in Moto3 during 2021, the teenager is now part of the formidable Red Bull KTM Tech3 Moto3 crew.

4. In 2021 Raul came close to beating Marc Marquez’ Moto2 record for wins in a single season. Fernandez collected eight garlands, falling short by 1. His haul however was the highest accumulation by any rookie ever in the division.

5. Raul helps Spain retain the biggest demographic on the MotoGP grid. His presence means there are nine Spaniards in MotoGP. Italy has seven riders.

Quiz Qs! Think you know all about the orange in MotoGP? Let’s squeeze your knowledge

1. Who delivered KTM’s first MotoGP podium finish? What year and what circuit? (3 points)

3. In what year did the prominent Tech3 team join the KTM family? (1 point)

6. What is the highest MotoGP championship finish by a KTM rider so far? (1 point)

8. How many riders have posted GP track time with the RC16 for Red Bull KTM? (1 point…and 1 more point for naming them)

10. KTM test riders Dani Pedrosa and Mika Kallio have both won Grands Prix. Pedrosa completed 13 seasons in MotoGP and made a wildcard appearance for Red Bull KTM three years after retirement. What race did he contest in 2021? (1 point)

How did you score?

10+: World Champion in the making!