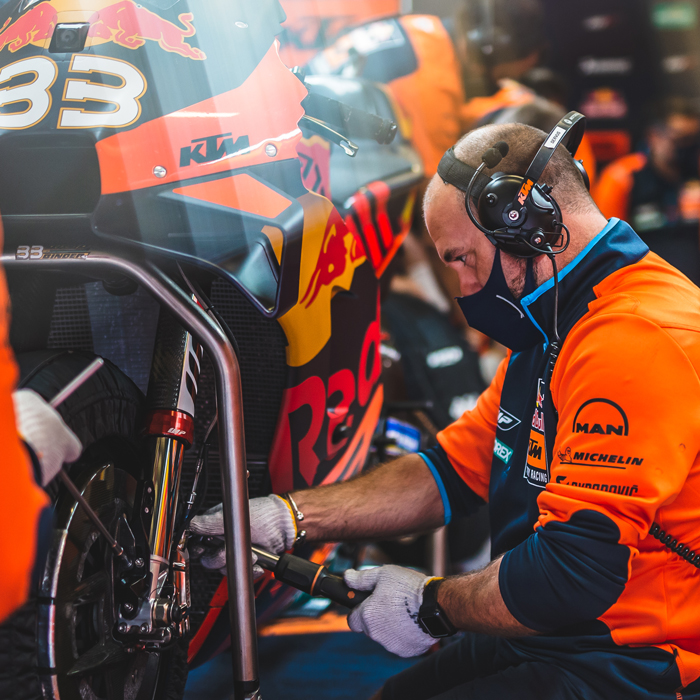 Frantic scheduling, rookie race winners, wildly unpredictable scenes: MotoGP has been a dizzying ride this year but what’s it been like for someone in the depths of a pitbox?!

Jonny Eyre sits down at a table and puffs out his cheeks. It’s been a busy day at the Circuit de Barcelona-Catalunya and now we’ve asked him to talk about life in 2020 as a mechanic for Red Bull KTM Factory Racing’s Brad Binder in the midst of a schedule that has now reached nine Grands Prix in eleven weeks.

The Englishman is used to the long haul and a racing campaign that stretches around the world for the better part of nine months but the pandemic-enforced break – that caused MotoGP to be delayed until May – has condensed the series into a rapid fixture list of back-to-back events and consecutive weekends of competition.

“It is much more demanding because you are either immediately moving or you are sitting still in the same place,” he explains. “It can be good in one way because if the rider is struggling for settings then he can get another crack of the whip the following weekend. Three-in-a-row is hard because there is no pause, no let-up. On Sunday night you are already changing things for the next weekend whereas if you are moving then you are packing up, travelling and unpacking.”

Working in MotoGP can be draining and requires compromise and commitment: that’s nothing new, especially with the calendar growing to almost 20 Grands Prix in recent years (plus pre-season, mid-season and winter tests). Teams are relieved to be on-track in the current climate where international movement is particularly tricky but 2020 has delivered a fresh degree of intensity around a near-deserted pitlane and paddock.

“I don’t think that chips away at the passion for the job,” Eyre estimates. “Having a decent rider and decent results lifts you up a bit and keeps you motivated, especially the boys that you are working with. It is key to have a good group. If you are down or need a bit of a pick-me-up then they are there. They are friends actually.”

Red Bull KTM have powered into emotional and unchartered territory with rookie Brad Binder in 2020. It appeared as if the South African would need a good amount of time to acclimatize to MotoGP after late 2019 tests where he was two seconds off the pace. From the launch of the championship with a double salvo in Jerez however he’s been the revelation of the series and delivered KTM’s first win, with the manufacturer just three and a half years on the MotoGP grid.

The results and experiences with Binder mean that 2020 has been even more surreal for Eyre and the crew. “Brad is completely different to the rider we had last year; in all aspects,” he reveals. “He wants to learn. He wants to do it in the right way. He doesn’t mind testing and making discoveries and that makes a difference. He won’t be bothered about trying things whereas some other people just want a part to arrive and work on the bike. Brad will put the work in.”

Binder’s character has helped forge a beneficial working environment to cope with the COVID-championship and the strange swings in form that has delivered six different winners so far. “Brad is good because he’s one of the boys. He’ll come around and talk and chat and you can speak about anything. He’ll go cycling with the guys. He was playing ping pong in Brno. He’ll spend time with us and that creates a good atmosphere.”

“If you have a good relationship with the rider – everybody that is – then it creates a positive vibe,” Eyre adds. “When he crashed in Jerez he came in and said: ‘sorry boys’. We were like ‘mate, as long as you’re alright…we can fix the bike’. That’s part of racing. You can’t fix the rider but you can fix the bike.”

9th August 2020 will be a milestone date for the KTM factory: the day that Binder won the company’s first Grand Prix in the premier class and thus ensuring a winner’s trophy in every single major FIM discipline for the ‘orange’ squad. Eyre was at the center of the whirlwind that was whipped up by the 25-year old on his RC16 at the Brno circuit.

“To be honest, we didn’t expect it at all and I don’t think Brad did,” he smiles now. “I was doing the pitboard and our box position was too close to the last corners, so we were further up the pitlane and away from the rest of the group. Our radios were going crazy. Brad looked good. He didn’t have any moments. After the race we were like ‘f**k, we just won’. When we got back to the box then that’s when the emotion kicked in for me. I lost my voice for three days! Everyone had put so much work in, the team, the engineers and everyone at the factory, the whole lot, and to get a win was just incredible.”

While many things around a Grand Prix have shifted – limited fans, a closed paddock, constant PCR testing – the job inside the box (aside from the use of a facemask) remains the same. “I think the busiest part of any GP weekend is Saturday night because you are getting everything set for the race and that means a lot of double-checking and maybe changing some parts that are up to mileage or won’t do the race inside the mileage [range], things like that,” Eyre says.

The mechanics might have a special bond with a rider, but they also have one with the motorcycle. Eyre, who had been part of another factory squad for more than a decade, has been finding his way around the KTM RC16 since the beginning of the MotoGP project. “It’s now a proper race bike. It is built to be worked on,” he assesses. “There isn’t really anything that tricky or is a pain in the a**e. It is built to race and built to take apart. KTM was new to the class and there was a lot to learn but, over the years, the RC16 has become a competitive MotoGP race bike, on the track and to work on.”

Eyre could probably service the #33 machine with his eyes closed but technical preparation is an area where his professionalism has to shine. “You put it together like you’d want it put together for you. I would want full trust in the bike, so from my side that’s how I do it,” he explains. “If you have a good set of lads then you work well together and some will double-check what you’ve done – like the calipers – and I don’t mind that at all. We look after each other.”

Eyre says getting a modern MotoGP bike ready for wet conditions is now a hefty task (“I’d say fifteen minutes to change it to a fully wet setting, and that’s with 3-4 guys doing it”) and a crash can mean extra hours but it goes with the job (“You just get on with it. If the rider is alright and we end up working until 1am then that’s just part of racing. Some days you leave at 6-7pm and on others you are there until midnight.”). No caution is spared when it comes to evaluating components and repair of the RC16: “If you have any doubt or a part looks ‘iffy’ then you are better off changing it. You cannot risk anything. That’s why the guys I work with will have no problem to work and change stuff. If the chassis is bent, then we’ll change it. If we need new brake lines then we put on new brake lines. There will be three of you and you’ll all take a role and work as one. I might do the swinging arm and someone else will work on the front and someone else on the engine. You are doing your job but you are always moving and never stopping.”

The closest a MotoGP team come to an F1 style pitstop is the mid-race bike swap. It’s a technique that is constantly practiced so if a wet race is declared then every person in the box – including the rider – are set. “I’d say we do one or two bike swaps every weekend. Maybe at the end of a session or in Warm-up. It is good to do. Then you are ready and know where you might be plus or minus to the others.”

There are times when pitlane entry can be hazardous though. “I remember Dani Pedrosa, who I was working with at the time, coming into the pitlane in Australia for a bike swap. I grabbed him but the bike was a five-cylinder and as he switched it off the engine rotated a few more degrees and it cracked me straight between the legs. Dani had gone out again, but I was in agony on the floor. My boss was saying ‘Jonny! We need you!’ and I was curled up!”

There is evidently a certain sensitivity that needs to be protected as a MotoGP mechanic, but the guys are putting in the hard hours, effort and commitment to keep the show rolling.