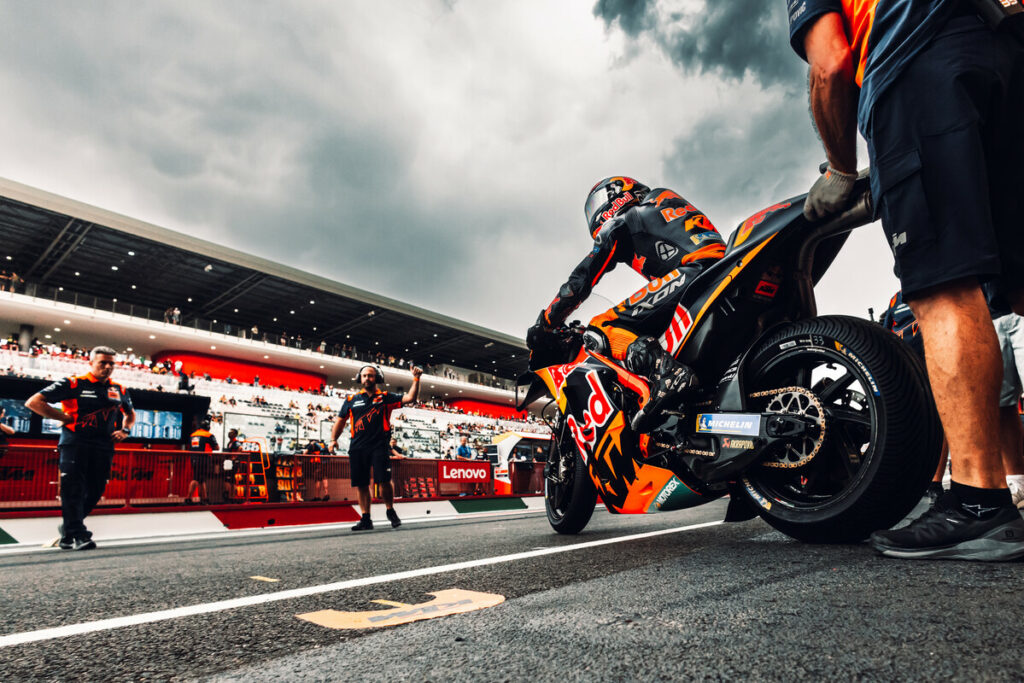 ’22 MOTOGP™ EXPLAINED: WORKING TOWARDS #2 IN THE WORLD

Was 2022 MotoGP a success or a strive against adversity? Or both? After its sixth season on track, we asked long-term Red Bull KTM Factory Racing Technical Manager Sebastian Risse to summarize the journey of the company’s most advanced motorcycle.

In 2022 Red Bull KTM Factory Racing classified as the second-best team in MotoGP. Brad Binder and Miguel Oliveira clocked two wins and five podiums with their KTM RC16s and Binder was the rider that ‘gained’ most positions through the 20 rounds of the season. The South African bookended the year with 2nd places at the opener in Qatar during March and then the closer at Valencia in November.

The early achievement at the Lusail International Circuit was especially sweet considering the floodlit facility had been such a troublesome venue for the factory. Qatar was the site of KTM’s debut as full-time members of the MotoGP grid in 2017; the KTM RC16 was 2.5 seconds away from the leaders that season. By the end of 2018 the steel-framed V4 had reached the podium and then victory in 2020 and has tasted winners’ Prosecco each year since.

2022 – the last term of the conventional Grand Prix format before MotoGP pivots to Saturday ‘Sprint races’ for 2023 – was a story of continual work and transformation for KTM. Binder, for example, only had one front row start all season as the crew negotiated new aerodynamics developments (with only two ‘forms’ allowed to be homologated for the season), a limited Michelin tire allocation and difficulty in finding razor one-lap speed for qualification. When it came to race pace and competitiveness on Sunday the picture was far rosier, but it was still a tumultuous campaign of work and understanding for the crew.

Sebastian Risse was able to give us a few underlying notes…as well as a few clues as to what to expect from 2023.

From the pre-season tests to Valencia: What’s been the main story of 2022 with the KTM RC16?

We ended 2021 with the conclusion that the main area we were lacking was acceleration and drive out of the corners. On one hand we saw a big impact on this from aerodynamics and also on turning – the way you pick up the bike – so it was our main focus during the 2022 pre-season. We’d been quite conservative with aerodynamics previously, but we had the goal to be more radical for ’22. We changed the approach from trying to find an aerodynamic solution for the bike to taking an aerodynamic idea and fitting the rest of the bike set-up around it as well as reconsidering some choices when it came to hardware. We wanted a rounder package with something more radically aerodynamic. This definitely opened some doors. We saw at Mandalika in Indonesia [round two] that we’d addressed our acceleration problem and we were quite positive about the start of the season. We had some great results but then we’d come to some other circuits where we struggled to understand how we could make this package work. It was related to track layout, tires and, of course, the bike. We had to work out how we could make it ‘rounder’ especially with the front tire allocation. It took a while. We struggled in the last overseas and the first European rounds to look for more margin with the front. Then we came to a phase where our recipes to react to a situation were always a compromise. We’d look for more turning or more stopping, and at some tracks acceleration was still an issue…but for a different reason than the year before! We learned more and more about finding better compromise. We tested some new components in Aragon that helped us. Overall, it was a combination of factors that affected us but we came up to quite a competitive level…it just wasn’t for all the tracks that we wanted. To sum-up I think we made gains with our acceleration but it was quite a raw approach in the time given. We tried to look for better but due to the homologation during the season you cannot change the aero, for example, so we were working a lot in the background. I think our bike will be much more rounded for ’23.

You’ve been with the KTM MotoGP program from day one. KTM had some new staff and specialists coming into the frame for 2022. How did that affect the way to work?

It is always a challenge to get the maximum out of new circumstances when a situation changes. I think we did a good job because I see the team working really well together and we’re very close with the staff at the factory. One of the main targets was to achieve more objectivity with what we were achieving, so more research compared to development, more understanding and more analysis of what is going on…and having more resources for this as well as using those resources in the right way! This was a structure building up during the season, and you come to a phase where this extra scientific approach doesn’t bring as much direct success as a trial-and-error approach.

Was it slower as well?

I don’t think so…but the processes had to be developed and you need a certain lead-time. Imagine just shooting into the air: you’d get your results immediately and if it goes the right away then great. But if you are studying something and really honing on the right area then this takes time to make the precise shot… but you made a big step with what you want to do. Once the process is running then projects enter different phases and more and more things pop up both in the work and then on the racetrack. There was a time where we had to bridge the development improvements with getting the best out of a current race bike package. I think it also helped us because we understood our bike better this way. Overall, I think we have much better momentum to make next year’s bike on target.

I think we definitely found something on the engine compared to 2021. We have opened a big book with electronics but this is something that never stops and you keep learning. Our aero looked quite radical but it was also just scratching the surface of the potential you can get out of it because aero is one part of the bike that carries a lot of compromise and you need experience with radical solutions to put it all together and make it more versatile.

One of the first big jobs after the Valencia test is a visit to the wind tunnel. How does that resource work for you and for the ideas towards 2023 aerodynamics?

Basically, it is part of a continual process. Aero development goes on all year because it involves a lot of parts and shape, knowledge and development as well as understanding to make something better. The wind tunnel is just one piece of that puzzle. We do a lot of simulations and invest a lot of resources into analysis of the track data. At different stages you need validation from the wind tunnel to fit together. So, it is important, and it is also something where the rider can be directly involved and look at the bike from a different point of view because they normally only have one perspective and they are busy in that position! We have had some interesting comments and opinions from those wind tunnel sessions. Generally, it is a tool to align the other tools.

What was your favorite moment of the season? The time when the comments, the emotions and the data all came together to show the KTM RC16 working to a very high level of its capacity?

You can scale that easily with results! I don’t mean just with the ranking on Sunday. Clearly, we had many races where we struggled for one fast lap in qualifying but once we scratched options on Saturday night and went for it on Sunday we had some very good races where we were not even on the podium. One crucial point of the season was Qatar and round one. That was a nightmare track for us every year until now. To end-up on the podium there was very special but it did worry us because when you fix your weak points so radically for a track that didn’t suit you then you wonder what will happen on the tracks that suited you before! This is also what we sometimes discovered during 2022. It was not always straight forward when it came to knowing what to expect before a race weekend. In Indonesia Miguel was so strong and with such an eagerness to show what he could do having seen Brad on the podium in Qatar. He had a super-weekend. OK, it was wet, but I’m sure he would have done very good in the dry also. We had a momentum that was really impressive at that point.

Yeah! You never get anything for free when you are looking for gains! If you get even the smallest thing then it’s fine.

Lastly what about the Sprint races for 2023? Explain how this will be different or difficult from the confines of the pitbox…

As a team, as an engineer, it will create a very challenging situation. As a rider even more so. We go from a session where we had to think about one ultimate lap-time to parameters like tire management. In one way managing tires now will be less important and will give us data to be ready for the ‘normal’ race. This will be very interesting for us. Basically, now we will have to be ready on Friday nights in the same way we used to be for Saturdays. It will be more intense and much more work but we see it as an opportunity to be better than others and that’s the target.