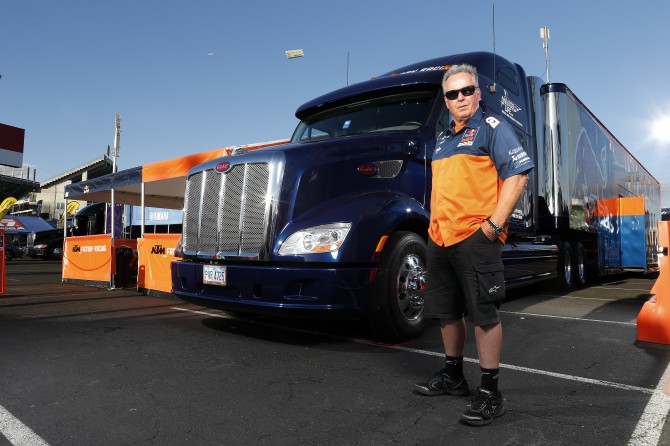 40,000 miles and counting: Hauling KTM across the USA

We find Red Bull KTM Transportation Specialist Don Baynes eagerly polishing the massive chrome hubcaps of his race truck in the paddock of the Coliseum Stadium at Oakland. The place is immaculately clean and we see ourselves in the wheel even before we’ve got close to tapping Don on the back to ask for ten minutes of his time. Baynes has been hauling the KTM outfit and bikes of Dungey, Roczen and Musquin across the width and length of the United States for over a year now so we thought we’d ask a little bit about his under sung role as part of the team… 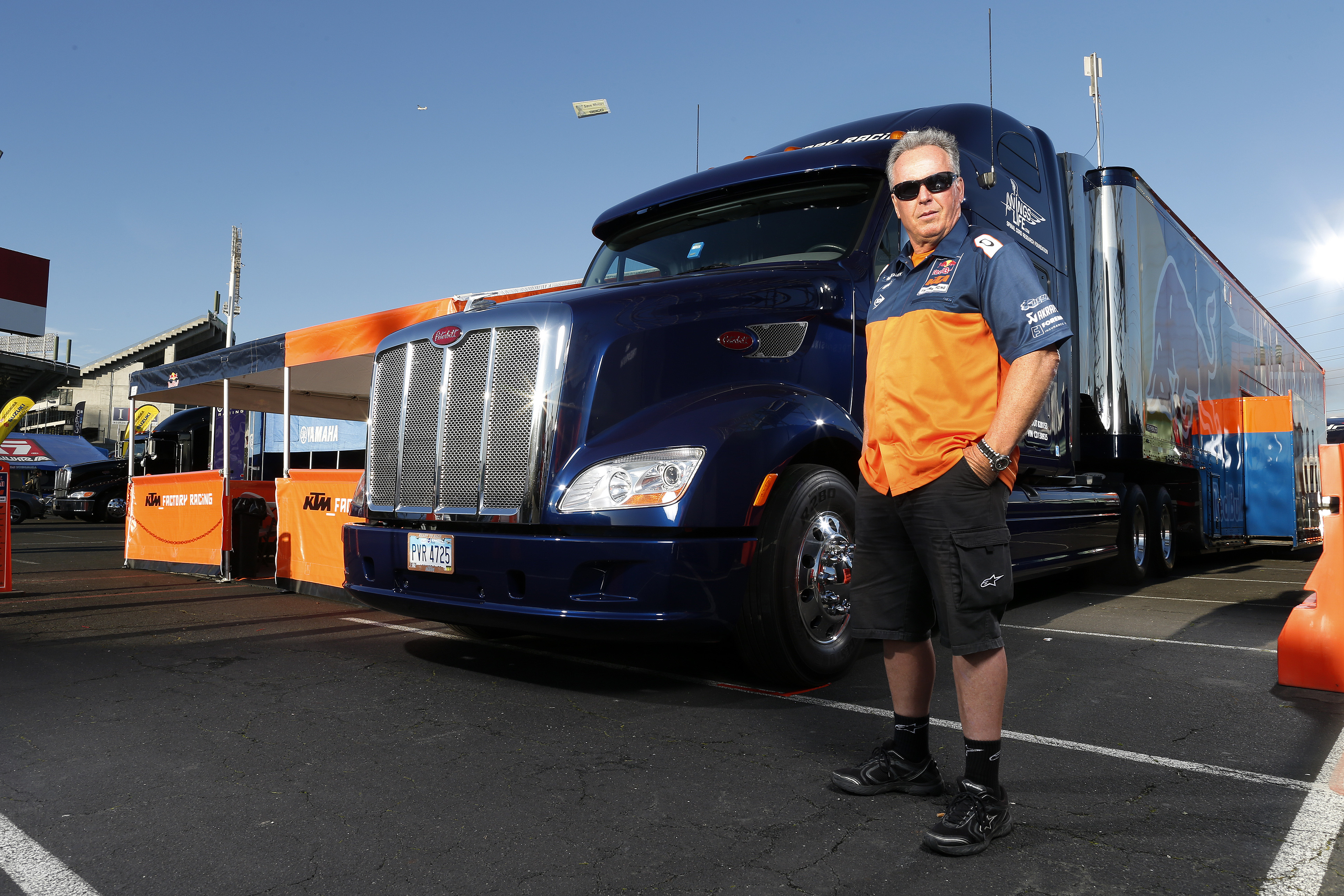 Don, what’s your background and how did you come to be a part of Red Bull KTM?
I have a road racing background in AMA Superbike and I’ve been doing this for almost twenty years now as far as racing goes. Approximately fifteen years ago I helped out Roger de Coster for just over a month as he needed a driver. He always remembered me and I used to stop by and see him when I was visiting the southern California Supercross races. An opening came up here and because of my friendship with Roger I’m part of the AMA Supercross paddock. I think this team is one of the most professional I have ever been on. It is a real pleasure to be here and to work with all the Red Bull KTM people.

AMA Superbike goes to a lot of places but the Supercross series is very wide-ranging also…
We race all across the country; and this is much more intense than Superbike which involves about twelve events and double headers but is also pretty widespread. We are in the paddock almost every weekend for Supercross.

The job much be pretty hectic…
There is not much downtime. Usually I leave for the race a few days before and then I have to clean the truck, which can take a whole day to wash and polish. The crew will arrive the following day and it will take us about half a day to set up and get the bikes ‘teched’. It is a lot of work. We have a policy at Red Bull KTM that the tent will stay up until after the race. It has to be visible to the fans and the KTM partners and sponsors. About an hour after the chequered flag we’ll start to tear it down and pack it up. It takes about ninety minutes to do it depending on the weather. Normally we leave the same night if we are in California and can reach the workshop. Otherwise we go to the hotel and then come back the next day to wash and rebuild the bikes, clean the inside of the truck and get packed up. I then leave that evening or Monday morning.

You must travel some pretty scenic routes throughout the USA…
Certainly. You see a lot of things through the states that maybe the general population might never see. We travel through about 40-45 states and go up through to Canada and Toronto. There is a lot of sightseeing and a lot of beauty on the road. This is a beautiful country.

Is there time to take it in or is it all about meeting tight schedules?
Once we are out of California and really on the road then it becomes about making schedules and getting to the next events. We’re looking at around thirty weekends of racing and the mileage can reach 40-50,000 [64-80,000km] depending on the calendar. We are criss-crossing the country a bit more in 2013 so that total will be nearer fifty. Usually I am the primary driver and I like to start my day between six or seven am and we’re allowed to drive around eleven hours on the road. We’ll take a break around midday and for fuel stops and we look to reach a hotel by eight pm where we’ll rest up and drive again the next day if needs be.

How do you find being in the AMA Supercross paddock?
There are a lot more factory teams and a lot more race transporters here; I’d say around thirty to forty whereas there is around ten to twelve in road racing at the moment. This is an intense sport and we’re only at the track for two days whereas road racing we are usually at most of the major speedways and there for four days. We can move between asphalt at the stadiums for supercross to dirt for the motocross nationals and that involves a lot more clean-up. Especially after it’s been raining! It can take half a day more just to get everything back to normal.