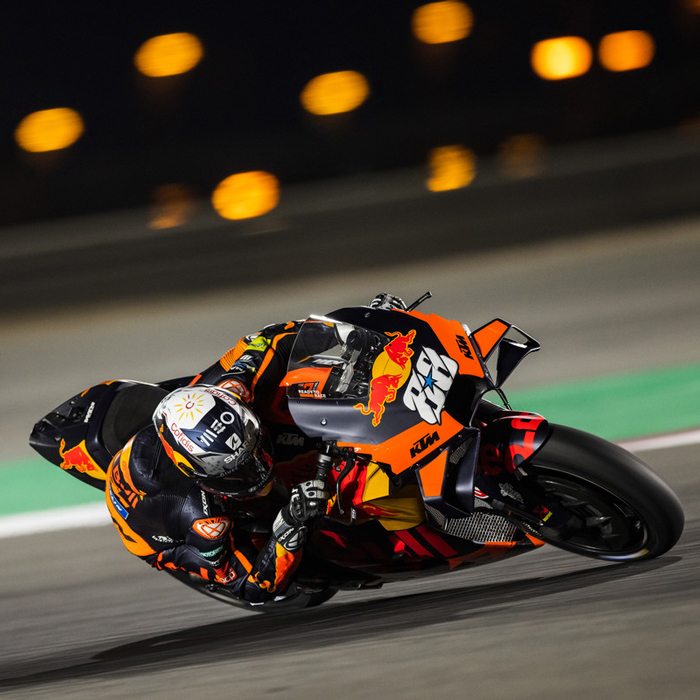 5 (MOTOGP) THINGS YOU MIGHT NOT HAVE KNOWN ABOUT: RED BULL KTM FACTORY RACING

KTM mark five years on the MotoGP™ grid in 2021, so to welcome the half-decade and the upcoming new season we dug up some trivia about the two Red Bull KTM Factory Racing riders, both products of KTM’s GP Academy system.

1. Before the Qatar double header officially opens 2021, Red Bull KTM Factory Racing will have completed a total of 72 Grands Prix. The journey started with a debut wildcard appearance at the 2016 season-ending Gran Premi de la Comunitat Valenciana in Spain. Their first event as full-time members of the grid came only four months later at the Losail International Circuit where Pol Espargaro and Bradley Smith finished 16th and 17th. From the next 70 races KTM managed to score 3 wins, 9 podiums, 4 Fastest laps and 3 Pole Positions. They rose from last place to 3rd position in the 2020 Teams Championship and from 16th in the riders’ standings in 2017 to 5th in 2020. A fast turnaround!

2. Miguel Oliveira is new to the team for 2021. The 26-year old is the seventh rider to wear Red Bull KTM MotoGP race colors after Mika Kallio, Espargaro, Smith, Loris Baz, Johann Zarco and Brad Binder. 2020 was Miguel’s 10th year in Grand Prix and he boasts wins for KTM in Moto3™ and Moto2™ (six in both divisions and all with the Red Bull KTM Ajo team). He moved from 12 career victories to 14 in 2020 by giving the Tech3 crew their maiden success in the premier class at the Red Bull Ring. Oliveira is the sole Portuguese racer in the FIM Grand Prix World Championship.

3. Brad Binder was the original KTM ‘hat-trick’ man last summer. The 25-year old was a rookie in the MotoGP class for 2020 and went from being more than two seconds per lap slower at the end of his first tests to MotoGP victory by over five seconds in just 10 months (five of which were inactive due to the COVID-19 pandemic). In his moment of glory in the Czech Republic and only his third MotoGP race, Binder achieved the ‘set’ of Moto3/Moto2/MotoGP victories in Red Bull KTM colors; which Oliveira could match in 2021. Both riders came through the Red Bull MotoGP Rookies Cup (although neither earned the championship) and first coincided as teammates at Red Bull KTM Ajo in Moto3 in 2015. They reunited in Moto2 for the same squad in 2017 and 2018, appearing on the podium six times together. 2021 will be their four year of collaboration already.

Incidentally this is not the first time that a Red Bull KTM Factory team have had a Portuguese and a South African in the same line-up. In 2008 Rui Gonçalves and Tyla Rattray were steering works KTM 250 SX-Fs in the MX2 class of the FIM MXGP Motocross World Championship and – promisingly – Rattray would go on claim the title that year. Gonçalves would be MX2 runner-up in 2009.

4. The KTM RC16 crossed the finish line first at Brno on Sunday, August 9th 2020 for the Grand Prix české republiky. The win meant KTM became the first manufacturer to triumph in Moto3, Moto2 and MotoGP categories and equalled Yamaha for wins in the most amount of classes: Red Bull KTM also won in the 125 and 250cc divisions in the ‘00s. Binder’s Czech feat was a milestone for the company and the first time KTM had led a lap in MotoGP. They would have many more by the end of the season. Moto3 – and the original KTM RC4 that won the championship at the first attempt in 2012 – helped towards the thinking and the creation of the KTM RC16; still the sole motorcycle on the grid to use a steel chassis and WP Suspension.

5. 2021 will be a curious campaign for Red Bull KTM. For the first time the brand has lost their ‘concessions’ as a result of their excellent results in 2020. This means a cap on testing and modifications permitted during the year. The engine development freeze agreed by the manufacturers causes the beating heart of the KTM RC16 – which can make more than 345kmph – to remain largely untouched from 2020 to 2021. The effects of the global pandemic forced five-days of pre-season testing to take place at the Losail International Circuit which is the scene of the opening back-to-back races of the calendar. KTM riders accrued more than a thousand laps in the 35 hours of permitted track time. Oliveira and Binder regularly haunted the top 10 of the results sheets as they worked through suspension upgrades, different aerodynamic forms and electronics.

The diversity of Losail was a challenge as hot, late afternoons turn to dusk and then cooler evening humidity forces adjustments and alterations to keep the speed through the flowing turns. The team were not only working for rounds 1 and 2 but for settings that have to be homologated for the duration of 2021 before the first ‘red light’ disappears. Nobody said MotoGP was a pressure-less environment!

4 Responses to 5 (MOTOGP) THINGS YOU MIGHT NOT HAVE KNOWN ABOUT: RED BULL KTM FACTORY RACING