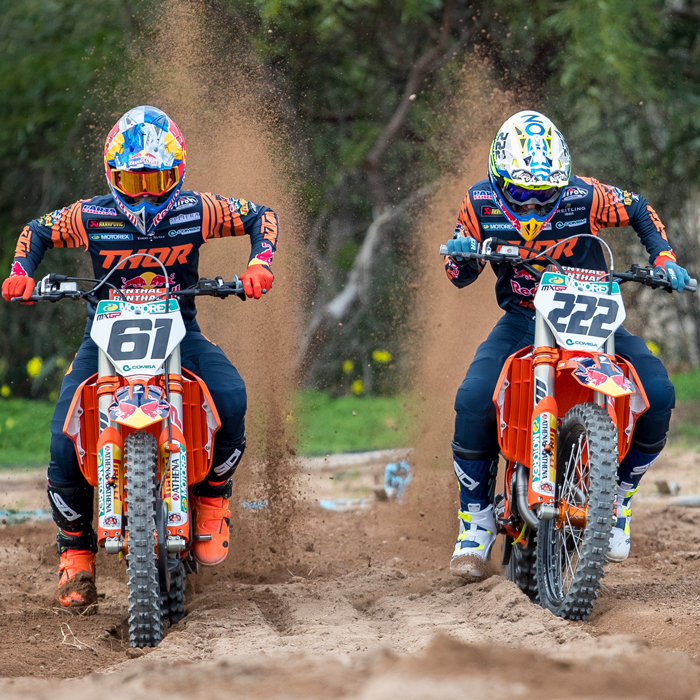 Who, what and where will make the 2020 FIM MXGP Motocross World Championship worth watching in 2020? We identify five potential key markers of the forthcoming season… 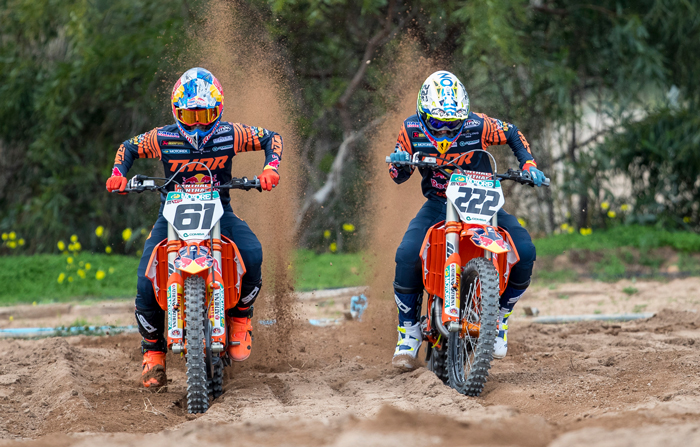 Twenty rounds mean a massive sixty starts across seventeen countries in seven months for the 2020 FIM MXGP Motocross World Championship with each Grand Prix consisting of two motos and a Saturday Qualification Heat: it’s a vast number of races and risk involving a variety of tracks, terrain, conditions and climate from Argentina to Asia.

As the series gets ready for the 63rd year there is already sizeable buzz around Red Bull KTM Factory Racing: a team that have won both MXGP and MX2 classes on seven occasions in the last decade and who have seen eight different riders crowned (and a total of twelve titles) in sixteen years in MX2 alone. The factory fields works KTM 450 SX-F and KTM 250 SX-F motorcycles in each category and the MXGP division carries special significance in 2020 for the presence of Tony Cairoli, Jeffrey Herlings and Jorge Prado and a total of fifteen world championships between them… 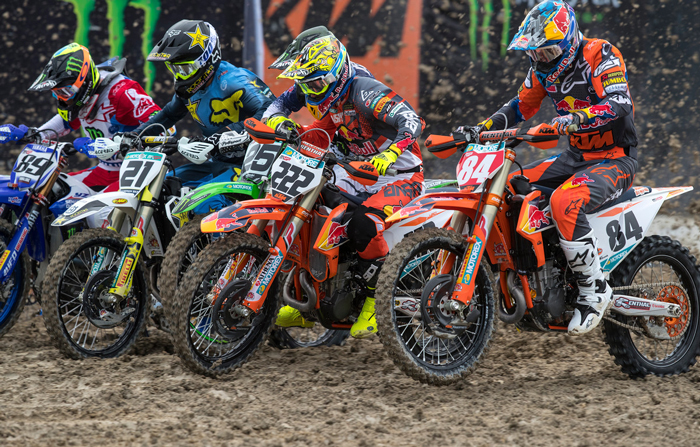 Jeffrey Herlings and Tony Cairoli get ready to tussle again for the MXGP crown from the confines of the same awning. The duo has swung from extremes of fortune since both lined-up on the KTM 450 SX-F together in 2017. In that first year Cairoli returned from two seasons of injury problems to toast his ninth championship as Herlings started to dominate the second half of the campaign and once the Dutch rookie had recovered from a broken hand. They finished 1st and 2nd in the standings. 2018 promised a battle royal and the opening round in Argentina gave a taste of Herlings’ supremacy: each rider won a moto but #84 relegated Cairoli to second place on the final lap to claim the second race and a powerful first statement in a term that would see him win 17 from 19 Grands Prix (classifying as runner-up in the other two fixtures). Herlings’ efforts represented one of the most dominant seasons in FIM World Championship history as the teammates swapped overall positions but still ended 1-2.

2019 saw both out of action: Herlings derailed by a winter foot fracture (which he would re-injure in his mid-season comeback) and Cairoli banished by round nine due to a dislocated shoulder. Despite the adversity the pair still totalled six wins from twelve outings.

For 2020 Herlings is fully fit, even wiser after a fourth year disturbed by physical problems and is unbeaten in pre-season International meets. Cairoli has only completed one race since June 2019 but, at 34, is the oldest and most experienced rider in the gate and knows how to construct a title-bid based on consistency. While there are strong threats from Yamaha, Kawasaki, Husqvarna, GasGas and reigning champs Honda, the orange bikes are expected to take up residency at the front of the field once again. 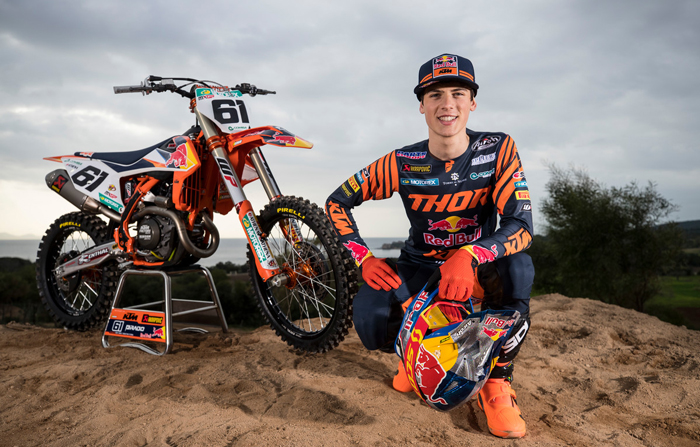 Still, only 19 years of age Jorge Prado’s debut in MXGP is the most anticipated since Herlings’ arrival in 2017 and one eagerly awaited considering the Spaniard’s ruthlessness with holeshots, victories and trophies in just three years of MX2 racing where he gained 31 wins and two consecutive championships in 2018 and 2019.

Pushed into the MXGP division partly by desire and mostly by regulation (a rider cannot defend an MX2 title twice in a row) Prado is in a similar predicament to Herlings where he’ll be playing ‘catch-up’ in his first taste of the premier class. A broken left femur in December meant the youngster only recently warmed the saddle and is in a dash against the calendar to make the opening rounds of Grand Prix.

Circumstances could be better but the effortless riding style, technique and maturity (coupled with that peerless system of getting out of the start gate) means that Prado’s competitiveness in MXGP is a question of ‘when’ not ‘if’. Tony Cairoli won his first season in MXGP in 2009. Romain Febvre and Tim Gajser repeated the distinction as rookies in 2015 and 2016 and Herlings managed eleven podiums and six wins in 2017 as a precursor to his masterful opus. Prado will have a mammoth task on his hands to both recover, learn and excel but the most successful rider ever from his country has more than enough time on his hands. 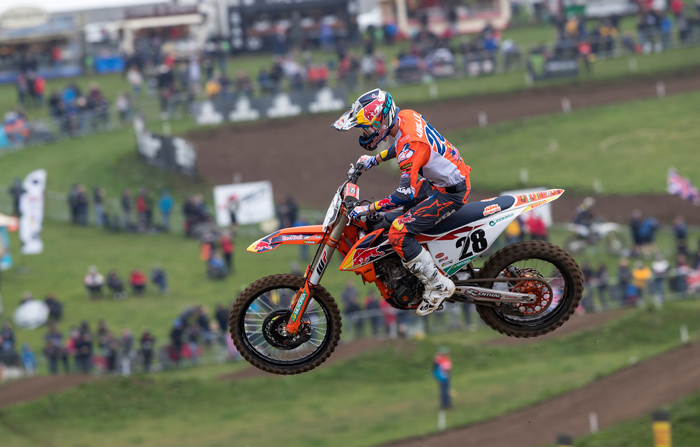 Of the entire 2020 MX2 entry list there are only two riders with experience of winning a Grand Prix and one of those is Red Bull KTM’s Tom Vialle: the French rookie star from 2019 came into the year as an unknown ‘gamble’ by the factory team and delivered seven podium finishes – one of those being the milestone success in Sweden – and a 4th place championship finish.

The imminent MX2 contest is an open book but 19 year-old Vialle is one of the names on the first pages courtesy of his form and rapid development in ‘19 and his ability to maintain the excellent starting prowess of the KTM 250 SX-F that has set the benchmark for speed, performance and results since its introduction to the scene in 2004. Race fans were accustomed to seeing the MX2 pack frequently tipping into the opening corner with an orange ‘tip’ and there is every indication that the slight but technical form of Vialle will again be at the sharp point in 2020. KTM is hoping that the ‘rookie effect’ could have a similar spread on Rene Hofer as the teenage Austrian completes his scale through the EMX European Championship levels to earn his shot at the highest level. Hofer is the first ‘home-grown’ racer to represent the factory crew since 2001. 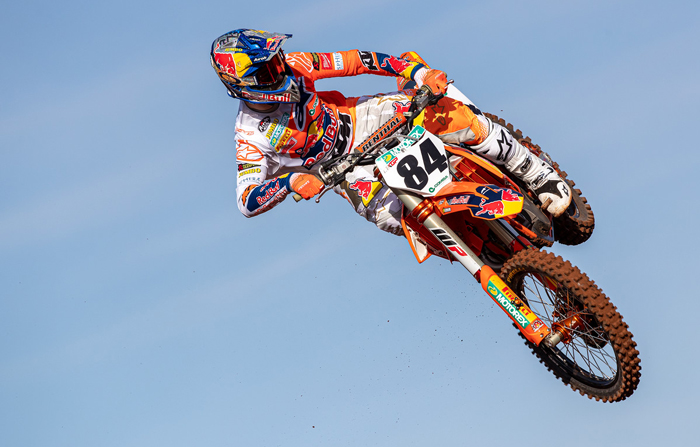 The additions of Argentina, Indonesia, Turkey (although there was a one-off Grand Prix in Istanbul in 2009) and China in the last five years means that MXGP is continuing to evolve and find new territories and circuits. For every visit to a historical site like Maggiora in Italy or Valkenswaard in Holland, there are newer, more experimental rounds, such as the temporary builds at Imola or Palembang in Indonesia or Shanghai.

For 2020 there are potentially four ‘unseen’ venues on the slate. Riders and teams will have to learn the characteristics of Intu Xanadu Arroyomolinos just outside of Madrid for round five, find a new track in Jakarta at the end of June for round twelve, venture into KymiRing in Finland for the seventeenth race and then perhaps contend with a new location for the Chinese Grand Prix in mid-September for the penultimate outing of the year.

Of the twenty dates, only four should involve a dip into sand while the rest constitute a mix of hard-pack and mud with just the Grand Prix of Argentina at Neuquen occurring in the unusual volcanic ash found in the region. Even though MXGP passes in a rush – with the exception of July there are three fixtures every month from March until September – the quantity of GPs means a special approach to the calendar and the phrase ‘it’s a long season…’ will frequently emerge from the mouths of riders as the competition gets underway at Matterley Basin in England on March 1st.

The rate of travel and racing will be relentless, and a considered strategy of avoiding injury and hefty points loss in order to tackle the diversity of the Grands Prix and capture that treasured final championship position could see different riders shining at different moments to meet the conditions. As an example of the variance then the very first Grand Prix in the UK at the tail end of winter could be a mudder, while two years ago there were sub-zero temperatures and snow for what will be round two at Valkenswaard near Eindhoven a week later. Just six weeks on and the paddock will encounter warmer temperatures in Spain and Portugal while the Indonesian back-to-back double in June is usually a sweltering test of heat and humidity.

The speed and openness of a track like Kegums in Latvia and the hard-pack of Orlyonok in Russia are a contrast to the compact and tight layouts at Arco di Trento and Imola in Italy. The slick, slippery and hard surface at Loket in the Czech Republic is a total contrast to the sapping bumps and sand of Lommel in Belgium found just seven days apart: in fact, that week in the summer is usually once of the most fascinating microcosms of the championship in terms of demands on the racers.

It will be a ‘long season’…but also a comprehensive and exciting one!

One of the best places to watch every minute of MXGP race action is through the official online streaming package available at www.mxgp.tv