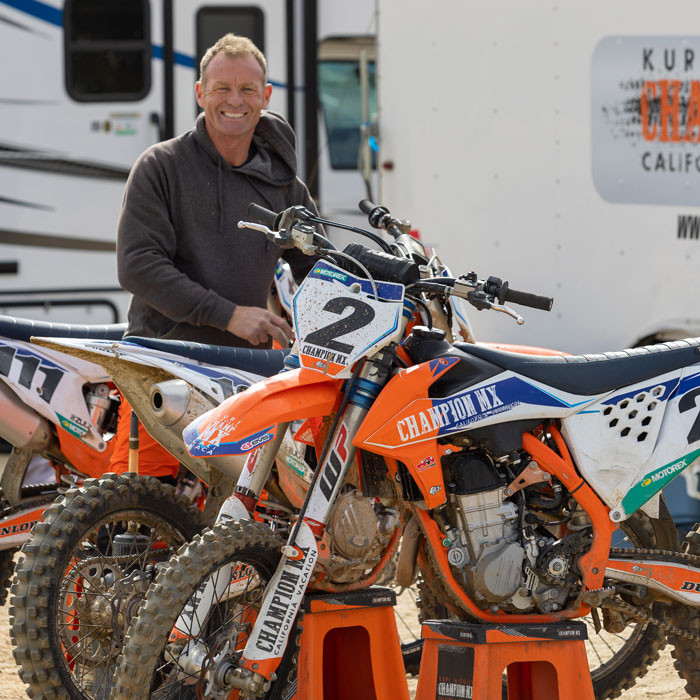 A CHAMPION’S ESCAPE: TALKING WITH A KTM LEGEND IN SOUTHERN CALIFORNIA

Kurt Nicoll laid the foundations for the monolith that is now the KTM Racing Department. We caught-up with the Brit, and overseer of ‘Champion MX’ to ask about ‘ride-cations’, KTM now and his thoughts on 2021 MXGP…

The recently turned 57-year-old former Grand Prix winner is still ripping up the dirt and regularly invites people to share a track with him in Southern California for his ‘Champion MX’ experience.

Like current KTM Motorsports Director Pit Beirer, Kurt Nicoll had a name and a ‘game’ that came from the sharp end of competition. Before the German took the helm of the race department midway through the last decade after his own fruitful career, Nicoll was his predecessor and the man who transitioned from being a four-times motocross world championship runner-up and 500cc KTM campaigner into a team manager and eventually control of the competition department.

From the final years of the previous century until 2006 (when he then relocated to California and formed part of KTM’s USA racing wing until 2009) Nicoll guided the teams from MXGP to Enduro to Rally and 125cc and 250cc GP road racing. It was already becoming a big ‘egg’ before the Englishman decided to emigrate and focus on North America.

From his base in Temecula – a short distance from KTM’s American HQ in Southern California – Nicoll dabbled in Supermoto and other ventures; one of which included his ‘Champion MX’ scheme. ‘Champion MX’ as much about the fun and exhilaration of riding motocross as it is about improving as a rider. The ‘ride-cation’ set-up benefits from Nicoll’s close ties with KTM to have the very latest SX-F bikes at their disposal, a pick of sumptuous Californian venues and Nicoll’s expertise and passion, as well as fondness for a good story.

“We started ‘Champion MX’ in 2016 and an exclusive cooperation with KTM in 2017 so we get 12 new bikes and a series of junior SXs as well, so the fleet is brand new and decent-sized,” he explains. “Luckily around here we have good tracks. Within an hour of my house, we have at least six different places. People come over and stay for a week and can ride a different track every day or stay at their favourite one. We’re lucky to have Glen Helen, Fox Raceway, Perris Raceway, Lake Elsinore. There is a bunch of them.”

Nicoll says that ‘Champion MX’ is more than just track day tuition or a riding school. His organisation can take care of each-and-every single detail for visitors or holidaymakers and customize the ideal taste of MX in that reliable gorgeous CA climate. It’s this communal approach which puts his company in a special position. “We have complete diversity,” he says of the riders and the clients. “We have entire families and all ages. There are also people who are dead-serious about their riding and are looking for improvements. There are some that just want to ride a bike and go to the pub every evening. There is a complete cross-section but the one thing that unites everybody is dirt bikes and motocross. It’s like a common language and an amazing community of people. The main thing that I find is that they are all really ‘into it’ in one way or another and that’s what’s great. We get a lot of people that like to do the logistics themselves but then others coming for the first time that we’ll pick up from the airport and shuttle them to the tracks. We are flexible and cater to what people need. We get a lot of regulars…and they learn the ropes and meet us at the track.”

“There are a few other companies around that do something similar but the advantage we have is new bikes coming through all the time and that’s pretty unique,” he adds, keen to stress that ‘Champion MX’ might also be the best way for native Californians to throttle a potential new KTM SX-F.

While Nicoll boasts decades of knowledge of racing and motocross from both sides of the pit wall, he insists that ‘Champion MX’ is not a breeding ground for the next major stars. “It hasn’t been a temptation and not what I am aiming for,” he asserts. “It is more catered for people to enjoy themselves while improving their riding…but we’re not really orientated for the highest level. It’s more casual. I don’t harbour any ambitions to get back into the professional side!”

All that experience means Nicoll is also well placed to comment on the evolution of dirtbikes, and the KTMs in particular. “It does blow my mind a bit and that’s one of the great things about keeping contact with KTM – not on a professional level but for the production bikes – I’m shocked all the time,” he admits on the march of technology. “The 2023 KTMs are nearly ready to be released and that is such a step forward again. It was shocking to ride them and see how they can still make improvements like that. Through riding and doing Veteran races I find that the bikes are way-more capable than I am now! My mind still goes back to the fact that if you got sideways on a 500 KTM in 1993 then you were on the floor but the 450 now lets you get away with so much.”

“The racers now have also made a big step forward in terms of their athleticism,” he continues. “When you watch top level racing – which I really enjoy – man, they are absolutely flat-out from the first minute until the last. The older fans that look back with rose-tinted glasses and like to talk about 45 minutes motos, well, we didn’t ride anything like those kids do now!”

The inevitably leads us onto MXGP and the remarkable 2021 championship won by Red Bull KTM’s Jeffrey Herlings in the very last moto of 36 in Italy. Nicoll was an avid viewer. “It was fantastic,” he states. “…even if it is quite difficult to watch it live over here. What a 450 championship…and to come down to the wire. Those three [Herlings, Romain Febvre and Tim Gajser] were pushing to the absolute limit and it always makes for a better championship if you have more than two guys. With two it always seems to swing one way or the other. I really enjoyed it and I think it will be a while before we have another one like it.”

Nicoll last visited the factory in Austria during 2019. The KTM footprint in Mattighofen has changed almost immeasurably since he last called the town ‘home’. Even in Murrieta, KTM North America is expanding and thriving. The progress of the company since he was last on the payroll is another aspect which leaves him impressed, particularly the blossoming racing division and its spoils in MotoGP™. “It’s amazing. KTM has grown out of all recognition in Mattighofen, as it has over here as well,” he observes. “It is great to see. They have the leadership. They did an amazing job through the global recession by continuing to push forwards. The success is well deserved. The growth into road racing; I cannot believe how well that went. When we did it in 125 and 250 then it felt good and possible but trying to supply engines at that time in MotoGP meant success felt so far away. Once they started [in 2016] they moved forward really quickly. KTM has always been a racing company, even going back when I was racing for them in the 1980s. It was a company based around racing. It still feels like that now whereas their competitors seem more like big corporations that go to the track. KTM go racing first, and that’s why the success is always there.”

8 Responses to A CHAMPION’S ESCAPE: TALKING WITH A KTM LEGEND IN SOUTHERN CALIFORNIA