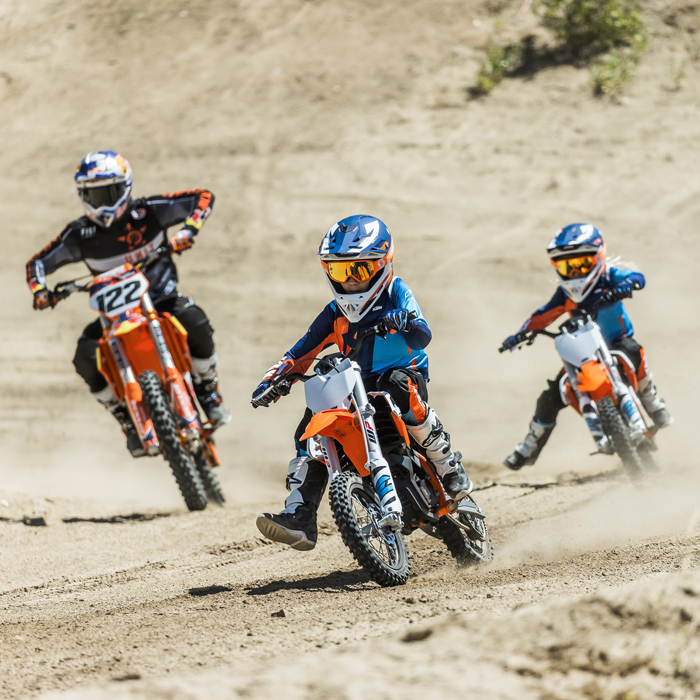 A CHIP OFF THE OLD BLOCK? THE MADDISONS GET FAST AGAIN

There was one recognizable figure keeping a close eye on the inaugural event of the European Junior e-Motocross series at this year’s Motocross of Nations. As Red Bull & KTM stunt/FMX icon Robbie Maddison plugged in the KTM SX-E 5 of 7-year-old son Jagger to charge in the Mantova paddock, we asked the high-flying, wave-surfing likeable Australian about becoming a ‘motocross dad’…

Robbie Maddison has had plenty of reason to get nervy in his career. Whether it’s backflipping London Bridge or setting fresh world records for the longest motorcycle jumps, designing new FMX tricks or doubling James Bond; the now-40-year-old Australian has had to cross his fingers more than once.

At the 74th Motocross of Nations towards the end of September Maddison had a different kind of anxiety. His son, Jagger, was one of more than 30 youngsters spinning electric mini motocross bikes like the KTM SX-E 5 through the Mantova sand for the very first European Junior e-Motocross series.

Robbie and his wife Amy were joined by his other kids Kruz (10) and Rocco (2) for what was very much a fun trip to Europe and the chance for Jagger to experience some action away from the family’s base in Temecula, California, where they have resided since 2005.

Maddison has made a name for himself thanks to some outlandish and amazing spectacles but now he wasn’t the only one in the family taking center stage as the EMX-E provided eager juniors like Jagger with a first platform for experiencing the biggest MX events and a section of elite level racetracks.

Robbie, you know very well the risks involved with racing and riding but also the buzz that comes from it. As a Dad watching from the sidelines, you must be conflicted over the whole thing…

Honestly, I was very reluctant to get the kids into racing. Jagger is here and he’s not the fastest on the track but has great technique and is smooth. I haven’t pushed them to race, and they haven’t done any big competitions. I’m wary of the whole thing but the more time we are around the sport the more friends they make! I’ll never be the father who pushes and puts pressure on them to win but if they naturally have the urge to do it then I’ll support them. My eldest son wants to be a champion and I think I’d be robbing him of his dreams if I didn’t support him. They consciously want to do it and have made the decision, so I’m giving that support.

How can you compare their approach to your own childhood and story?

When I was growing-up I had the attitude that if I was going to do something then I was going to give ‘my all’ but the effort and the expectation for results somehow got split for me: the pressure to win pushed me along but it became something where it [racing] was not essential. With my own kids I would think that I’d focus on fun, work on technique and the number one thing for me is safety. It was a hard decision…but I also didn’t want them to be sitting at home wondering what would have happened if they hadn’t tried racing. I do some pretty crazy stuff, so I’d be a bit of a hypocrite if I said they couldn’t. You cannot control every circumstance on a bike but I can teach them to ride with technique and with the best equipment and on the best bikes. There are a lot of other families in the same space doing things right and consistently, and I think we can be one of them. At the end of the day motocross is a great sport and has been great to our family. Some of the people I grew up racing with are still some of my best friends today. The community internationally shares a common bond. FMX is a direction I went in but there is a part of me that felt I could have been a GP racer as well. My kids kinda have the same issue that I did in being small when size and strength comes into it at some point!

Your kids will undoubtedly have opportunities because of your name but they will also have to bear the scrutiny of it. They will have also seen the work, worry and the graft of riding and racing…

For sure there’s an advantage thanks to our circle of people. The other day we were out riding with Grant Langston. Jeremy McGrath is a friend and I grew up racing with Chad Reed. There is a plethora of talent around us, past-and-present. But the kids have to work for what they get, and the results will speak at some point. Jagger will have expectations on his shoulders but that won’t come from me. We were doing a little local race before coming to Italy. He was having a little cry on the start line because of the pressure of it all. I had to give him a little shake and say: “Hey man, we’re here to have fun and have a smile on our face.” As long as we leave here happy, healthy and having learnt something that’s all that matters. Progression counts. It’s what the sport is about and what I’ve been about my whole life. I helped do that in Freestyle and the evolution of tricks, but everything has its own timeframe. If you look now then Freestyle Motocross is not so popular anymore and Freeriding is taking over. The tricks are not respected as much. Our kids want to race and to see what it’s about and get a taste for it. I’m not here to push them to be world champion. We’ll re-evaluate it year-by-year…but I owe it to them to give them the opportunity. We’ll just start at a basic level and locally. If I can help by instilling some of the lessons I learnt then that can only help. I’ve already seen them develop quickly in a short amount of time. Kruz has a technique and a style that I never had at his age. It’s exciting for us. My great relationship with KTM means we can slot the kids into some special things but that’s also not going to last forever. We also don’t expect everything to be on a plate. We’ll grind at this, for sure.

The main thing I like to teach my kids is how they conduct themselves. If they are friendly and respectful then I think this shines through more than anything. Kids with a s****y attitude will only have a short window of opportunity. I think motocross teaches you great life lessons because when you get knocked down then you need to get up and keep marching on. That’s how it was for my career. I kept reinventing myself.

Is there part of you that’s afraid of becoming the stereotypical ‘Motocross Dad’ at some point?

Well, if we’re going to do it then I am definitely going to be and preaching some of the lessons I learnt. I think I can shortcut their path of failures or disappointments to help them progress, simply because I’ve been banging my head since I was 4-years-old! I’d like to think I could make their journey in motorcycling a little more streamlined than mine. Just the ability to analyze technique and learn from great riders and trainers. We’re very fortunate to live where we do.

Lastly, Jagger is on the KTM SX-E 5, which is a great first introduction to riding and racing for kids. What’s your view on electric tech for motorcycles?

I’m Pro-electric and I love technology and the evolution of things. If you get stuck in your ways and you don’t want to move with the times then you get left behind. I’ve noticed that in my own industry. I was reluctant to get involved with social media initially and then saw that you needed to. It was a big lesson that you need to ‘get on the train’. The electric revolution is coming and motorcycling is going that way. KTM have an amazing Freeride E-XC and I love it. It involved almost zero maintenance it was amazing. The same with the kids’ bikes. All I do is adjust the chain and lube them-up, check the tire pressure, charge them up and off we go. The boys will be riding for hours and my neighbors won’t even know. I think it’s inevitable that the top classes of motocross will have a [electric] bike in there sooner or later. You just have to see how they have changed the mountain bike industry. I think it will open-up avenues for growth in the sport that we cannot fully realize yet. Motorcycles are undoubtedly held back by noise complaints and with that going away I think we’ll see more urban racetracks. It will become more accepted. Freestyle motocross has been held back by the way its structured but with electric bikes I see a whole load more possibilities. They are getting better, stronger and looking more like proper dirtbikes. I’m excited to see where the future takes us. In ten years from now I’ll be very surprised if there is not a full electric circuit. I’m all about it.

6 Responses to A CHIP OFF THE OLD BLOCK? THE MADDISONS GET FAST AGAIN