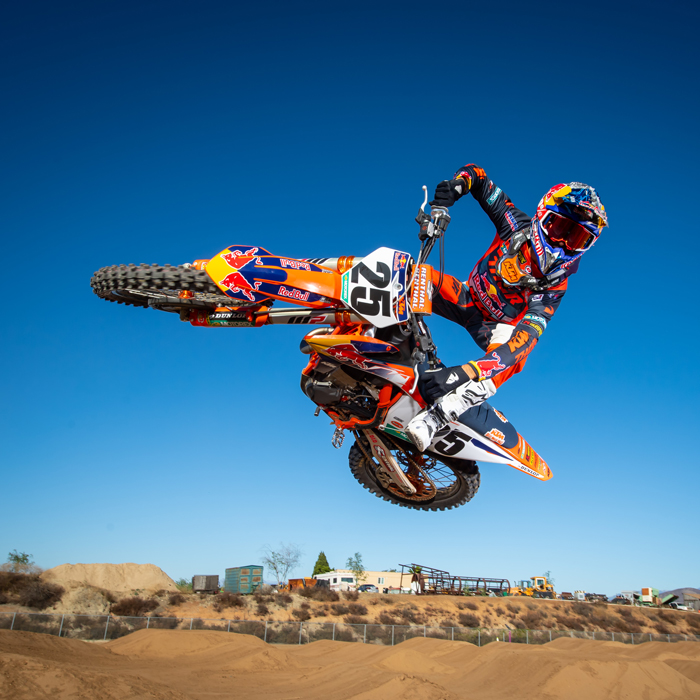 A CONVERSATION WITH MARVIN MUSQUIN

In 2021 the 31-year old has been part of the AMA Supercross and Motocross paddock for a decade so we decided to make a call and ask #25 about coming back to the Indoor series after a year away through injury, making an impact in a crazily close ’21 contest, KTM longevity, his career and more…

“Can you hear me?” Marvin Musquin is surrounded by hissing and squirts of air. It sounds like he’s in a submarine. “I’m just sitting in a hyperbaric chamber…so it’s a good time to talk!”

Twelve and a half years submerged in Red Bull KTM colours means Marvin is the longest-serving racer for the company, bagging two FIM MX2 world titles, a 250SX crown, Motocross of Nations glory and a seven-figure cheque at the Monster Energy Cup. It’s been quite a career since his protracted move into the factory Grand Prix team in 2009 and the likeable Florida resident is still operating at the highest level, earning podium finishes already in the current 450SX supercross campaign.

We might be disturbing his post-training moment of tranquillity, but it is a rare occasion to get the Frenchman during some ‘downtime’ while the hectic supercross season is running…

Why exactly are you in a hyperbaric chamber?

It’s something Aldon [Baker, trainer] has at his house, in his gym. It’s a cool machine to help with recovery and I’ll do it after a workout or any time really. It’s good to put my headphones on and take a nap or listen to some music for an hour or so. It’s relaxing.

So, you must be in there a few times a week?

Well, at least once a week. The way the pressure works in here is like going to altitude.

How are you feeling generally? The biggest question around you for 2021 – after missing a year of racing – is about the time it takes to get back to the highest level of performance…?

Good. I had the pace in some qualifications and was right there for the top three in some rounds. My speed has been pretty good. I missed 2020 Supercross with the injury and came back for the outdoors, which was slightly easier to do; I noticed how much of a totally different ‘game’ supercross is and supercross tracks are for any kind of injury. That question was one I had for myself: I thought ‘can I come back to my potential?’ and the good thing about being here in Florida with Aldon’s program is that I get to ride with Cooper [Webb] and Zach [Osborne] and we had RJ Hampshire as well. It was a good comparison and in the first few weeks I was not doing what I wanted to do, but that was normal. I wanted to get better every day and that’s how it turned out, both physically and mentally. I started getting closer to those guys and battling in practice. It was good because it was pushing me and gave me more confidence. I had two good months of preparation without any injury worries and went to Houston [round one] pretty excited. I knew I was capable of racing to my full potential for twenty minutes but, wow, the level [of the riders] going for the podium surprised me. At Houston the top 15 was inside a second in practice. Starts became so important. It was amazing to take third at the first race. I had a few crashes and mistakes in the other rounds.

Is that just the rustiness of being back in a race situation?

I think it is. The season has been so hard, especially if you cannot get a start. Bad times, bad gatepicks, bad starts, chaos on the first lap trying to pass: it all rolls into each other. So, it’s been frustrating to be in positions where I shouldn’t sometimes…but at the same time I’m showing decent speed.

The parity in supercross seems crazier this year. It’s similar to MotoGP™ and MXGP now where there is such a spread of riders that can win or be on the podium…

I feel it was like that last year already. I wasn’t racing but I was watching and the level went up. A few years ago – two, three or four – it wasn’t that close. If you look now then a rider like Adam Cianciarulo can qualify first but then in the Main Event he’s struggling. I feel like everybody can be fast for one lap this year. The tracks were quite basic in Houston and they started to get a little bit more technical after but some are – I don’t want to say ‘too easy – but….well, the bikes are close, the riders are close and everyone can do the same thing on the tracks. I really feel we need to look at the tracks of 15-20 years ago, maybe make the jumps steeper so we don’t go as flat, far and fast. This season is definitely tough. When you go back to the truck and you look at a paper that says you are P14 in qualifying then you start to go a bit crazy about it and think ‘I suck…’

Even with your experience I guess that could stress you out…

It does! But then you have to look at it a different way and see that you are just half a second from the top five. Still, it’s hard not to think about the position only!

Twelve and a half years now with Red Bull KTM. Behind the wins, titles and achievements is that something you’re proud of?

Yeah, for sure. I’ve always said KTM are like family. Especially in the way I moved to KTM. There are a lot of stories and it’s quite unique. Without their support I would never have done anything like I did. It was the beginning of my career and I was in a bad position in 2009.

I remember it well…

You do! KTM did a lot to help me, Pit Beirer especially, so I feel a lot of loyalty and always wanted to move forward with them and keep climbing. Moving to America was a joint project and goal, and we did that together. Of course, things didn’t always work out the way I wanted to, and I chased better results but I won a supercross championship and did my best to win races. In the 450 class I was right there for a few seasons and was close for the title.

One consequence of that long association is the fact that you’ve ridden different generations of the KTM 250 and 450 SX-Fs. Have you seen or felt much variation in the bikes over the last decade?

Yeah! At the same time I feel that I have done really well with those changes. When I first rode the KTM 250 SX-F in 2009 it was with the PDS shock: remember that?! I won one of the most prestigious GPs by winning both motos at Lommel [deep sand track in Belgium]. Nobody expected that. We moved to a new bike in 2010 and we did some great things but a lot of guys were fast on that bike, like Jeffrey [Herlings] and Ken [Roczen]. It’s a cool story. One strong example for me with KTM was the electric start. I know now practically every brand has them now but people were still getting excited about them only a couple of years ago. Man, my KTM 250 SX-F had an electric start back in 2011! That’s only one example of how KTM always try to improve and be ahead of the rest. They do a lot of work. Here in America we have the production rule for racing but they still push to provide the best bike for sale so we can race it.

You’re 31 now. How is the physical cost of your career? I remember being at the Bercy Supercross in Paris when you suffered your first knee injury…

That was at the end of 2010, going into 2011 and I was racing Bercy before starting my career in America. I ended up missing supercross. I mean those injuries like ligaments and tendons…I wish I’d broken bones. Do you know what I’m saying? But that’s how my body is. Surgeons and physios have told me that I’m very flexible so I tend to injure ligaments and tendons more than anything. My last knee problem was probably the biggest and where I had the most things repaired. The other knee – that I hurt twice – is actually pretty good but this last one was big. It’s a bummer. My hand also in 2015. I don’t feel that they are ‘massive’ injuries but little ones that bother you over a long time. I’m still capable of training and racing but I do think about the effects on my body now and again and, unfortunately, that’s part of racing. I know my body is not 100% ‘normal’.

You’re one of the most technical riders I’ve seen. Can that skill and feeling still get better or do you think it’s an area where you peak and then look for improvements elsewhere? Can you still surprise yourself?

I have to say: ‘unfortunately not’. [pause] Also it’s harder on the 450 compared to the 250. It’s also nice to hear what you just say. There is a part of me that always wishes to be a bit better.

You put a rare old photo of you battling former MXGP racer Clement Desalle on 85cc bikes on Instagram the other day. Clement, and your countryman Gautier Paulin, both retired in 2020. Does watching your peers and former teammates like Ryan Dungey walk away make you reflect on your own career?

For sure I still follow MXGP so I saw that Clement and Gautier had both retired. Racing in Europe is quite a bit different to what I’m doing here in America. Every single rider has a different type of career. I mean, they both already had kids and a wider family whereas I don’t. Clement had been on the 450 for a very long time whereas 2021 is just my sixth. Everybody is so different. Also Dungey: another type of career. So, it is always hard to compare but it does make me think about things. When you turn 30-31 you think about the future and I always said as long as I’m having fun and good results then I’ll keep going. Obviously if I cannot fight for results then there is no point. I don’t want to race if it’s not to my full potential.

Can you see yourself doing a ‘Tony Cairoli’ and making it to 35-36?

Lastly, you were the last guy to win the big million-dollar bonus at the Monster Energy Cup in Las Vegas [2017]. Have you blown any of the cash yet or is it sitting in the bank?

Haha! We didn’t spend anything. Unfortunately, I want to say that what you see on paper is not what you actually get! The plan was to put it in the bank and watch it grow.

9 Responses to A CONVERSATION WITH MARVIN MUSQUIN