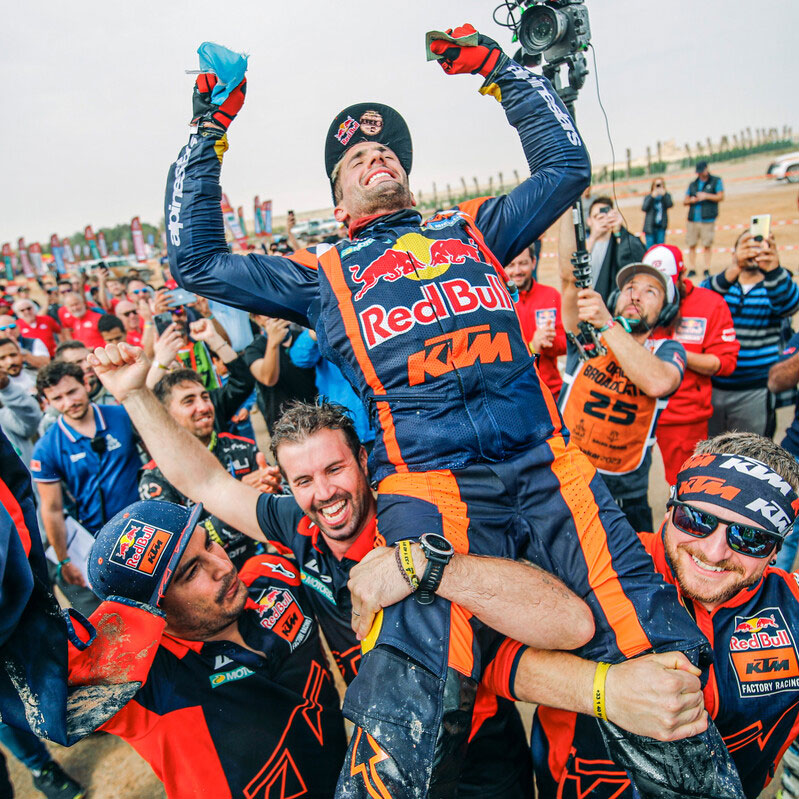 What a race. After 44.5 hours of the toughest off-road race in the world, it came down to just 43 seconds. FORTY-THREE SECONDS! The closest finish in the recent history of the Dakar, and as KTM celebrates 30 years of competing at the event, a magical 1-2 from Kevin Benavides and Toby Price is a fitting tribute as they have brought the trophy back to the orange squad for the first time in four years.

When we look back at the history of the Dakar back in the days of Heinz Kinigadner, who was the original mastermind behind the KTM rally program, he was racing a barely-modified KTM LC4 Enduro model, and the margins between riders were often huge. Sometimes hours. Fast-forward 30 years, the principle is the same; navigate over 1,000s of kilometers of varying terrain aboard a motorcycle with ‘liaison’ routes and ‘special stages’ where the racing is timed and the fastest at the end of the two weeks will be crowned champion. Sure, some tweaks have been made to the rules – as an example, this year we saw the addition of bonus time for winning a stage, which attempted to stamp out the ‘yo-yo effect’ of being a stage-winner– the bikes are purpose-built, and the safety has improved, but despite the many hours of racing, the margins we see today are tiny. Minute. Like 1,000ths of a second in a MotoGP™ lap by comparison.

Argentinian Kevin Benavides moved to the Red Bull KTM Factory Racing squad ahead of the 2022 Dakar as the reigning champion, a switch that at the time may have raised a few eyebrows. However, there was a reason for the change; the 34-year-old has always been passionate about the Austrian brand, and when he’s not sand blasting in the deserts of Saudi, or training at his home in Salta, he’s running a successful KTM dealership. Kevin studied business, and has his feet firmly planted in this side of motorcycling to future-proof a career after racing.

Benavides is a driven man, and his dream was to win in the colors of Red Bull and KTM. Throughout the near 8,500 km of this year’s Dakar his name was not particularly high on the leader-board, well, not until it really mattered. Second on the first stage, Benavides was not again in the top three of the stage rankings until the penultimate day (although he led the general for stage 10). His performance this year could be comparable to that of a silent assassin. Day-by-day staying consistent, not making any big mistakes and clicking off the kilometers with focus aboard his KTM 450 RALLY when it mattered, including an outstanding showdown performance, to take his second victory and KTM’s 19th at the event. As he crossed the finish-line his brother Luciano, who is also a professional rally racer and had already made it successfully to the finish, was waiting for him with the team – it’s sure the celebrations went on into the night. It was a special moment for KTM to reclaim the title they had so successfully dominated over the years, and testament to the hard work of the team as well as everyone back in Austria involved with the rally project.

Teammate Toby Price also didn’t win many stages in this Dakar, but he was rarely out of the top three and looked poised to take his third victory following a stint of tough Dakar races in previous years. In fact, Toby was the last KTM winner back in 2019, heroically clinching the Dakar title with a broken wrist and taking KTM’s winning streak to 18 consecutive victories. The 35-year-old took the lead of this year’s Dakar on stage 12 and had just a 12 second advantage going into the final day, which in itself was fascinating, as in years past the last day was always a ‘processional’ short stage to confirm the winner. The eyes of the racing world looked on with intrigue as battle-scared and visibly tired riders lined up for the final stint having concluded the days in the notorious ‘Empty Quarter’. It already had been such a visually compelling event for the fans as we watched the riders tackle riverbeds, stones, and endless sand in the sun – the way the rally was about to conclude was just the climax of two incredible weeks.

With the start-order reversed for stage 14 of 14, Price was last to go and gave his all, although the would be fairy-tale ending didn’t play out in his favor, as he struggled to validate three Waypoints while Kevin only back-tracked for one. For KTM a 1-2 is an outstanding achievement, but the pain of taking the runner-up spot in Toby’s eyes was clear at the finish – happy to be back in one piece with a trophy, but to lose out with such a narrow margin was in his own words a ‘tough one to swallow’. It will be a bittersweet one for Price, as he celebrates with his team and teammate in a race that will go down in history as having one of the most compelling endings to its story.

A note also has to be said about Red Bull KTM Factory Racing’s Matthias Walkner – the 2018 Dakar champion and Austrian home-hero. Walkner picked up an injury on the incredibly challenging Stage 2 – the one described as being the ‘toughest in the last years of Dakar’ – and fought on to stay in the race, despite struggling with his wrist. Lying just inside the top 10 it looked as though the KTM-racer would complete the event, but in a cruel twist that is synonymous with this race, he crashed out on the penultimate stage. While it’s good to hear there’s nothing major injury-wise, we know it will be painful not to be at the finish-line with the team and we wish Matthias all the best in his recovery.

That’s a wrap on Dakar 2023. The race is over, but the memories remain, as does the absolutely stunning imagery taken at this incredible event. KTM’s success story continues in a year of Dakar celebration for the Austrian manufacturer. It’s not just about the factory riders though; to all of those that had the courage to attempt to race it, to finish it, we salute you, for the Dakar is no mean feat.