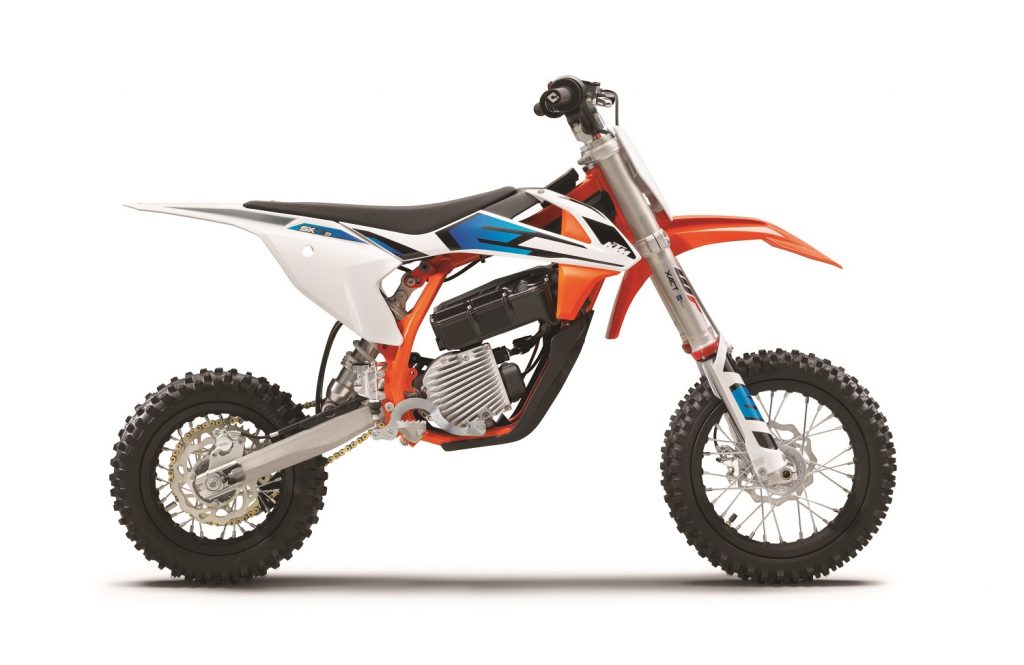 A Kid’s game? Talking Junior SX bikes and the ground-breaking arrival of the KTM SX-E 5

It’s not all 4-strokes, 450s and flying horses: KTM have also kept a sharp eye on their Junior bikes and the progress of the KTM SX-E 5 electric bike means a special step forward for the kids and the SX range. We asked how, why and when …

Among all the hype and homage to flagship motocrossers like the KTM 450 SX-F, the 2019 launch of the SX range had some surprises when it came to the Junior models. The recent EICMA show in Milan also upped the stakes with arguably one of the most important bikes in the offroad range being unveiled for the first time.

In a way the small SX´s – 50, 65 and 85 – are some of KTM’s purest expressions of riding and especially racing. The factory has equipped the machines with similar or the same components as their ‘bigger brothers’ with WP suspension, chromium molybdenum steel frames and a list of other features while the racing pedigree is obvious through the attention to competitiveness. If in doubt then simply look at the amount of KTMs in the top ten of the 2018 EMX 65 and 85 European Championships in the Czech Republic (6 in both classes respectively) last July.

A potent line-up of offerings for kids is basic marketing and sales sense. The machines may be mini but they should not be undervalued or underestimated. After all they could well be carrying KTM riders and customers of the future. “The kids are important to us and to get them on KTMs you need to get them early; you can see that even with our factory riders,” opines KTM Product Manager Offroad Joachim Sauer. “We have a very ambitious team for the minicycles.” The essential toy & tool
KTM looked at ease of use for the 50 with an adjustable multidisc automatic clutch, lightweight WP AER air fork, PDS shock and a priority for easy handling. The 65 went a little more toward ‘race mode’ with the frame and high-performance cylinder equipped with pressure controlled exhaust valve (providing lots of torque for the competitive 65 class). To accommodate the step-up in experience and the needs of kids to continue learning meant a demand for the SX´s to keep setting standards on the track.

This was especially relevant with the KTM 85 SX. “The 85 was taken very seriously because it is a completely new bike and we adopted the same strategy of development as the big bikes but perhaps with a little less intensity,” says Head of Motocross Platform R&D Manfred Edlinger. “A strategy usually means moving step-by-step and area-by-area to make improvements. We looked at this very closely on the 85 and we took one of our best – and smallest! – test riders to do the concept work because with kids it is always really difficult to get good feedback. We did the main comparison tests with him and for the next stage of feedback we checked with a Junior racer at a high level and in this case it was [2018 EMX 125 race winner] Rene Hofer. That collaboration in 2016 fitted really well with our schedule of development because it was the last year for him on the 85 and he used the prototype in almost all the races and won the championship with that bike. It was great, and we did the whole process together. We looked at new topics, implemented them on the test rider’s bike and then Rene was immediately riding and racing with that.” 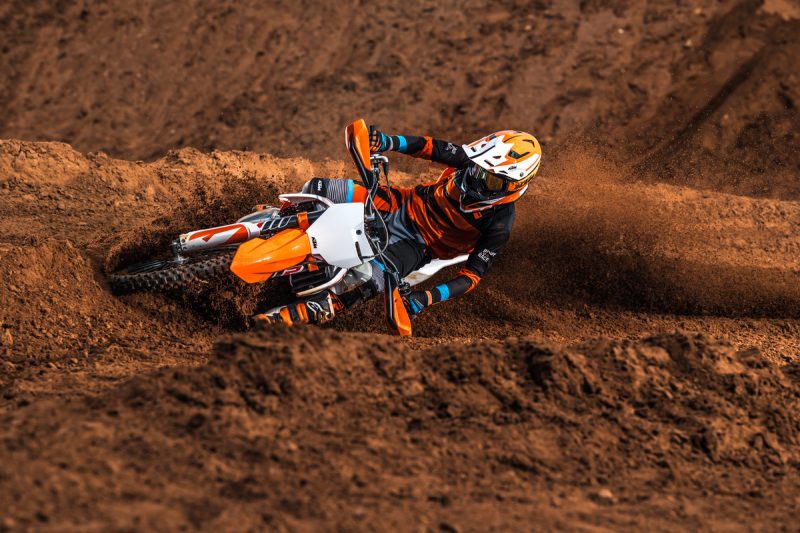 The 50 and 65s were not left behind. “We are always working to improve these models,” Edlinger adds. “The ergonomic development is a lot simpler because we use the same principals and surfaces but on a smaller scale. There are some small details that we improve frequently, such as smaller grips.”

If there is one regular observation when it comes to the Junior SX´s then it involves the bikes’ sheer strength and power. They really are READY TO RACE. Perhaps they are slightly overwhelming for the total beginner who has missed the 50 or 65 stages. “We have a restriction kit for the KTM 50 SX MINI and this works pretty well but the bikes are race-orientated and even the KTM 50 SX is quite powerful but it is difficult to find that balance between racing and slower riding with such a small engine,” Edlinger admits.

It is at this stage where KTM’s next project for the little SX´s comes to the fore. “The kit works well … but to be honest with the KTM SX-E 5 we’ll solve that problem and we can make different engine settings quite easily,” Edlinger says.

Flick the Switch
KTM have dabbled with e-mobility before. The Freeride concept for Enduro and Street have been explored and represented a benchmark of more than a decade of R&D and heavy investment. CEO of the KTM AG, Stefan Pierer, also underlined how important e-bikes will be to next generations of the company in a press presentation for the latest KTM FREERIDE E-XC model at the end of 2017. It was in October of the same year that KTM first talked about the KTM SX-E 5 and with a tentative date of 2020 for the technology to sit alongside the KTM 50 SX.

The motivation with the KTM SX-E 5 is not only to explore alternative power. It is a significant first rung on the ladder for motorcycle riders and KTM customers generally. “[This] is a great way to get more kids on two-wheels,” says Sauer. “This bike will be super-user friendly. Our 50s currently are almost race bikes and for beginners they are too strong. With electric you can make any type of power or power-delivery that is much more controllable. This will open the field and for the minicycles I’m confident that 50 is just the start.”

“We have quite a bit of experience with electric drive and batteries from the FREERIDE E but for concepts like the KTM SX-E 5 then you need a completely different development even if the department is the same,” he adds on the longer delivery time for what is one of KTM’s simpler but remarkably progressive motorcycles. “From year to year we gain more experience with e-mobility.”

“We are very confident,” says Edlinger by way of an update. The engineer also admits that he’d used his own kids as unofficial test riders for the various stages of evolution! “The performance of the prototype was already on a very satisfying level, even better than what we expected. We worked on different settings for the power delivery but even with the fastest setting we saw that unexperienced kids could handle it well.”

The KTM SX-E 5 also ended up having a few more appealing traits. “We are happy with our plans to make a ‘growing’ system, so you can change the height of the bike; this is a really nice feature and provides a bridge between the mini and the larger wheel SX.”

KTM have worked to keep their Junior offerings as (arguably) the number one choice for kids and parents. KTM SX-E 5 is just an example of how seriously they view this compartment of their motorcycle portfolio. 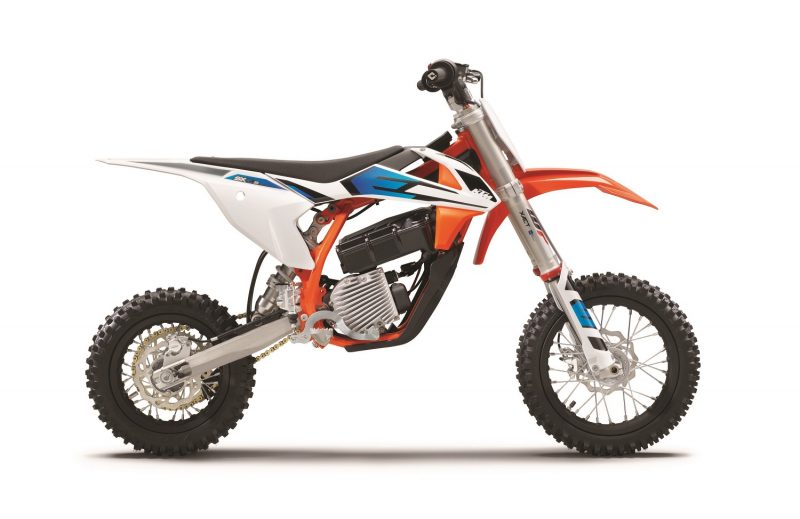 68 Responses to A Kid’s game? Talking Junior SX bikes and the ground-breaking arrival of the KTM SX-E 5