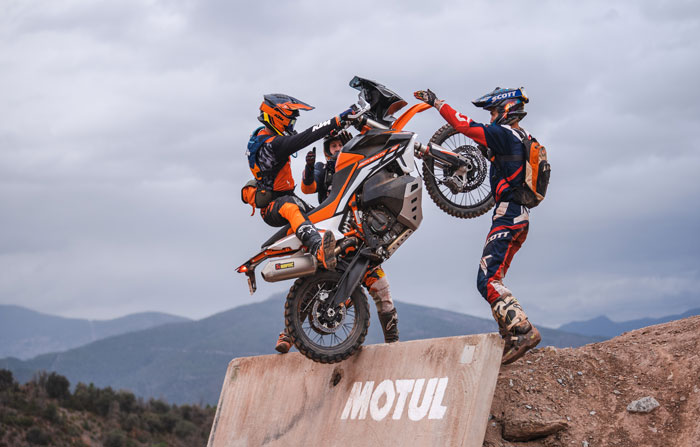 A KTM 890 ADVENTURE R FOR THE EXTREMES: CATCHING UP WITH HARD ENDURO SENSATION GREG GORDINNE

With a background in Trials competition and an immense passion for everything ‘extreme’ and racing, Greg Gordinne is more than happy to push his KTM 890 ADVENTURE R in the most impossible climbs and craziest of enduro trails, while capturing impressive videos that he shares on his social media platform.

Growing up racing Trials, Belgium’s Grégory – Greg – Gordinne developed a passion for the most technical trails from a very young age. “I started riding Trials bikes when I was three or four years old”, confirms Greg.

“I got my first bike from my father and soon after we started entering some amateur races. I learned a lot from my father. Trials bikes are giving you a good technical base for any type of riding afterwards. For me, through Trials I also learned to be competitive. I wanted to land a spot on the podium more than anything else when I was racing. But after a few years of racing, I realized what excites me the most is the technique on the bike.”

Switching over to bigger enduro bikes later on, Greg first got hold of an Adventure bike back in 2018. “I got my KTM 990 ADVENTURE in 2018 and soon after in 2020 I got myself on a KTM 790 ADVENTURE R” tells the Belgian. “The switch to the lighter and more agile KTM 790 ADVENTURE R was a big change for me. From the first few weeks I got on this bike, I was curious to see how it could handle in the enduro sections. I was very impressed, to say the least.”

“With just a few minor updates the bike could handle some proper enduro trails and some really demanding offroad terrain. And that’s when I realized this bike had a massive potential which I was very keen to explore further.”

Spending a considerable amount of time pushing his KTM 790 ADVENTURE R to its limits and beyond, Greg recently got hold of a new KTM 890 ADVENTURE R. “The difference in the performance, especially in low and mid rpm is massive,” admits Greg. “Despite the added engine capacity, the updates in the engine have made the KTM 890 ADVENTURE R a more all-around bike that is easier to handle in the tight sections.”

“The low center of gravity, good ergonomics and wide handlebars are making it so easy to ride for riders of all levels. For me, the combination of an agile chassis with great suspension is giving me plenty of confidence to push in those crazy uphils and jumps.”

“If I could highlight the top three features of this bike that I like the most, then I’d say it’s the suspension, the engine torque and the overall stability. With its suspension, it’s incredible how hard I can push and still trust that the bike will work in my favor making it all safe for me.”

“The torque and power can bring me anywhere. Even on a steep climb. The bike has so much power on low speed that it can keep going as long as you can hang on the bar! It’s a real tractor and I have to say that every day I’m a bit more impressed by it. The stability of the bike is probably the first thing that helps when trying to do special tricks. The lower gravity center is a real advantage as the bike actually helps to keep a good balance.”

Not shy to push his KTM 890 ADVENTURE R through its paces, Greg has some interesting plans for the coming months, which involve the Belgian lining up at the start of some of the most prestigious hard enduro events.

“I plan to race the Twin-Cylinder class at the 2022 Iron Road Prolog of the Erzbergrodeo. It’ll be a great opportunity for me to show how far this bike can go. I’ve also raced at Red Bull Romaniacs in the past, and I truly believe the KTM 890 ADVENTURE R can be competitive in the Bronze class. For me, this is the start of an exciting path, where I’ll try to show how good of a bike this is.”

In terms of the upgrades needed to enter these demanding events, Greg says: “My current set-up on the bike is very close to its stock version and that’s mainly how we’re planning to enter the Iron Road Prolog at Erzberg. The key upgrades include a set of heavy-duty wheels, a wider aluminum skid plate and some other KTM PowerParts bling for added crash-resistance. For electronics, I’m mostly using the RALLY MODE that offers the ability to adjust the slip from the rear wheel. A key upgrade that I’m looking forward to trying out, is the WP XPLOR PRO forks and shock that I will be getting for Erzberg. ”

Check out how Greg has set-up his KTM 890 ADVENTURE R for the most extreme trails: