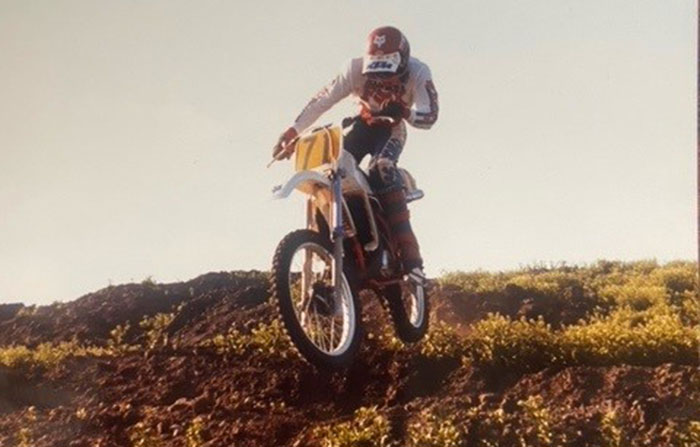 A LIFETIME IN ORANGE

Keen offroad racer Dylan Cartwright has lived with the touch, performance and attachment of KTM machinery for four decades. It means he is better placed than many to talk about the ‘KTM journey’. We asked for his story…

Sometimes when KTM grabs, then it holds. For Canadian Dylan Cartwright this was the situation at the beginning of the 1980s when the Calgary-resident made a down payment on a KTM 125 XC and KTM 250 XC. He then spent the following 40 years racing KTM technology, right up to the point where he was recently presented with a brand new 2023 KTM 250 XC by vast local dealership Blackfoot Motorsports to commemorate the long-standing association.

Cartwright’s lengthy devotion is unusual but what is also near-unique is his view on the trajectory of both KTM enduro and dirtbike development as well as the narrative arc of the company and the brand. Here he explains in his own words…

My first year of being a Pro was in 1982 on a Maico but…they had financial troubles and I wasn’t going to be able to get bikes in 1983. FunWest Sports in Calgary had decided to bring KTMs in for the ‘83 season, so I went in and put a deposit on a KTM 125 and KTM 250, so that was the beginning.

At that time, I was the only one racing a KTM in off-road events in Alberta [a province in western Canada]… I had some very good finishes as the 250 was a great race bike for both cross-country and motocross; it was skinny, light weight and had a very strong motor with great bottom and mid-power. 1983 was only my second year in the Pro class but I  had some very strong finishes and I really thought the bike suited me perfectly. After doing so well I knew some of my success was because of the 250 and how it was ahead of its time. Basically from that point onwards I had zero interest in riding another brand. I could see early on KTM’s commitment to producing very competitive offroad race bikes. I ended up racing Pro for 18 years and was fortunate enough to contest the ISDE in Spain on a KTM 300. It was an amazing experience and even way back then KTM had an excellent rental program, one tractor trailer full of rental bikes, a second trailer full of spare parts and the WP truck which included a free re-valve and spring change if you desired.

In 1992 I had a KTM 125 and KTM 300 and was very bummed to hear KTM had filed for bankruptcy and it looked like they were done…I was trying to figure out what I was going to race for 1993 as there was nothing else I was interested in. To say I was elated to hear the news Stefan Pierer had purchased KTM was an understatement – I immediately went to my dealer and put a deposit on a 1993 KTM MXC 300 which was a great bike. I think the turning point for KTM in becoming the powerhouse it is today was Mr. Pierer’s leadership and the fact they hired very passionate and competent people. Things started to really take off in the late 90s with off-road bikes that were very innovative with things like hydraulic clutches, large fuel tanks, bikes that were skinny and light weight, chrome-plated pipes, PDS rear suspension systems, toolless air filter access, strong motors and quality components, and later electric starters. One thing that is certain with KTM is they never sit still on development; they always have something fresh coming out and the release of the all-new 2023 bikes was another exciting milestone.

Over the years I have purchased over 50 new KTMs…and it has been amazing riding all the different KTM’s from 1983 to 2023 and seeing the progression from each new platform. The biggest things that stand out for me are brakes (I remember after the first creek crossing or mudhole and you had almost no brakes with the old Drum systems) one finger braking and clutch operation. Handling/suspension is a huge improvement and seamless very strong motors. It is still super-exciting for me just to go trail riding with my son and friends out in the mountains where we have some amazing terrain. Being a small part of KTM’s journey over here has been so much fun; having the opportunity to help out at bike shows, demo days, keeping KTM abreast of land advocacy issues in the West, helping place KTM trail funding in the West, etc. What has made my KTM story even better is my son Ty started racing KTMs when he was 6 years old. When he was 8 he qualified to race in the 2008 Montreal Supercross KTM SX JR challenge which was an amazing weekend. After a very successful amateur off-road and areancross career he was advanced to the Pro class and had a great first Pro race this year placing 3rd. He is now 21, so hard to believe he has already been on KTM’s for 15 years.

One thing never gets old is sitting on the start of an off-road race and looking down the line at a sea of orange…because in 1983 I was the only KTM on the line in Alberta. Or walking into Blackfoot Motosports, one of my long-time sponsors, and looking at a huge line up of new KTMs was also pretty cool, especially when I think back to how it all began. I’m looking forward to racing KTM’s for another 40 years…well maybe not quite that long but I have a few more left in me.