Ice Speedway is an unconventional sport: Riders lean their bikes at the most extreme angles on the iciest of tracks, with the motorcycle handlebars just skimming the track surface. Austrian rider Franz Zorn has been one of the world champions for many years, with a few technical treats from KTM fitted to his motorcycle. 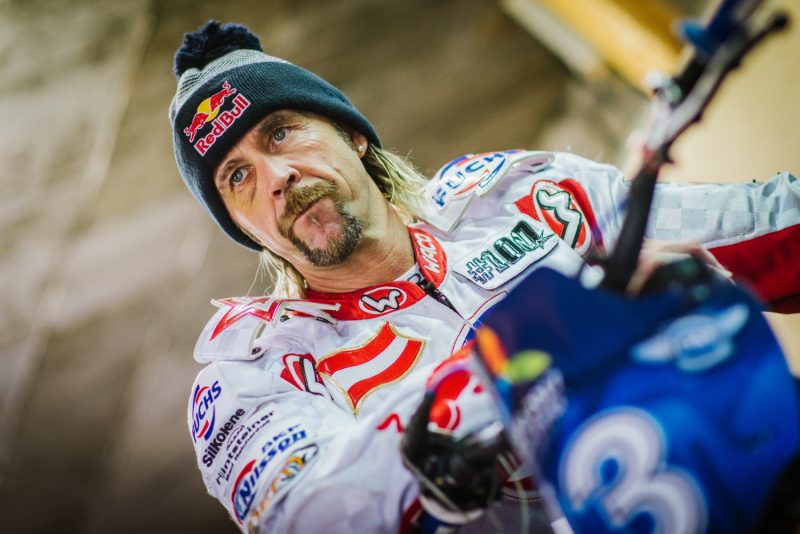 So where is he now? It’s half past eleven in the morning and the paddock in Inzell is brimming with activity. Everyone is tinkering with their bikes, including Kononov, Koltakov and Khomitsevich – the Russians who love to dominate this sport. Only one man is missing – the only rider brave enough to break the dominance of the Russians every once in a while: Franz Zorn. It’s the second day of the Ice Speedway World Team Championship; the day before Zorn led the Austrian team into second place. Now it’s time to defend their place on the second race day. But they’re still waiting for Franz Zorn. He lives in Saalfelden, just a 45-minute drive away, and was at home for the night. He can tinker with his bike more easily in his workshop at home than in the narrow storage room at the Inzell ice rink, which serves as the paddock where the best Ice Speedway racers in the world are packed so closely together that there is barely enough room to set up a foldaway chair.

Zorn’s black Sprinter finally rolls into the courtyard just before twelve o’clock. Finally! Zorn and his mechanics pick up the two bikes and push them along the thick rubber mats laid out throughout the paddock, to avoid damage from the spikes that are as sharp as fish hooks. Once both motorcycles have been propped up and toolboxes have been put away, Zorn has time to answer our questions. He takes a moment to quickly sign his autograph for a fan. And now he’s ready. 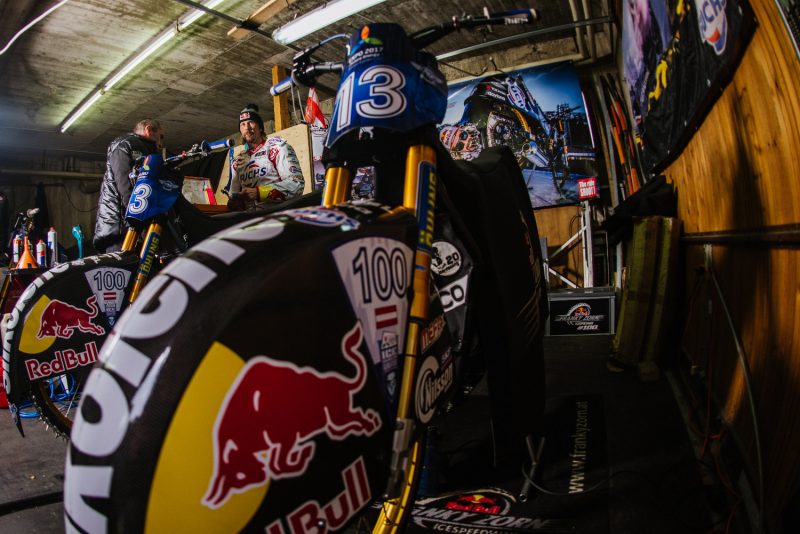 Franz (“Franky”) Zorn, 2000 vice-world champion and 2008 European Champion, is having his best season in a long time in 2017. He’s made the finals on one of two race days for each Grand Prix and is currently fifth overall, still ahead of Russian rider Daniil Ivanov. Ahh, these Russians. Nice guys, but mostly untouchable. Zorn summed up his struggle with the Russians a few years ago, when he said: “Trying to become the Ice Speedway world champion as an Austrian is like the Jamaicans having to beat ten Schlierenzauers at ski jumping.”

At 46, Zorn is at the prime age for Ice Speedway racing. He’s not the oldest rider in the Inzell paddock either: Stefan Svensson is a sprightly 58 and races for Sweden. Svensson’s compatriot Per-Olof Serenius, two-time world champion, competed in his final race a few weeks ago at the age of 68. “Ice Speedway racing is a sport for experienced riders,” says Franz Zorn, who admittedly doesn’t look 46, with his long hair and trendy Red Bull cap. In contrast to the informal, down-to-earth attitude of the other Ice Speedway racers, Zorn acts like a model in a lifestyle magazine. Fitting then, that no other rider in the paddock has such a professional appearance. The pit stop is always tidy, the mechanics wear matching team uniforms and the motorcycles have no signs of paint damage or scraped fenders from the last fall – everything is “A-OK”. If Zorn’s two bikes are next to one another, you can play the old game of spot the difference. This is actually quite tricky, as dozens of sponsor stickers have been applied in exactly the same place, right down to the last millimeter. After a few minutes though, it becomes apparent that three stars are missing from the rear fairing of one of the motorcycles. Scandalous! Zorn grins. “Yep, unfortunately I ran out of stickers.” Zorn says he’s just a typical Virgo, and those with the Virgo star sign are perfectionists. Zorn’s stylish appearance makes him appealing to sponsors – he is sponsored by Red Bull and has been known to fly to races in Red Bull boss Dietrich Mateschitz’s private jet. According to Zorn, a season costs him up to 90,000 euros, yet he comes out of it plus minus zero and doesn’t have to pay anything out of his own pocket. However, the sport has become increasingly expensive, since the regulations have permitted the use of titanium parts. Nevertheless, Zorn is not prepared to compromise on technology. Together with a Graz engineer who also works for KTM, he has developed his own cylinder head. All sorts of KTM parts can now be found on his motorcycle, from handlebars and various screw connections right through to all the important axles: rear axle, front axle, and swing axle. “Enormous forces are involved when riding on the Ice Speedway,” explains Zorn. “Many parts from KTM are perfectly suited to coping with these forces.” It’s no secret to everyone in the paddock that Zorn goes his own way when it comes to technology. His bike has a smaller rear wheel sprocket than those of his opponents, giving him an advantage at the start. And in a sport in which a race is only four laps long, the start is of crucial importance. 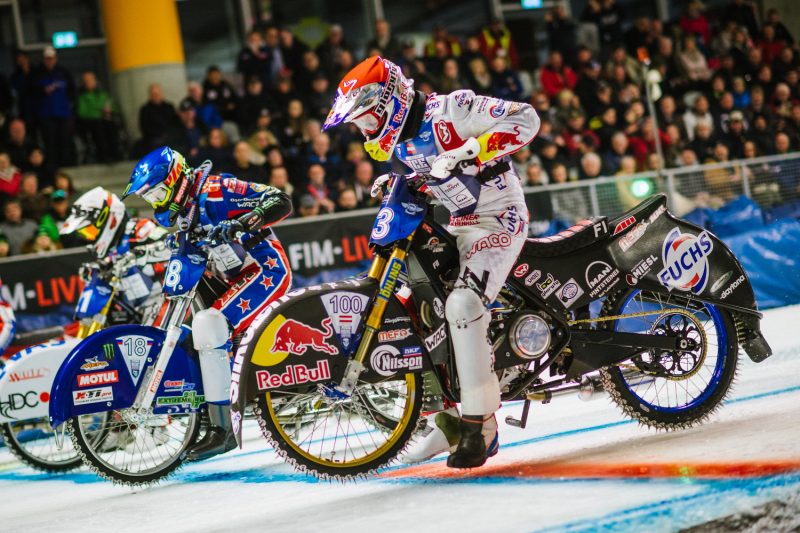 Ice Speedway is an extreme and exotic sport in equal measure. If, at the start of the race, the ice is even, provides good grip and is not littered with 15-centimeter deep grooves (which can turn the race into a rodeo later on), lean angles of over 70 degrees can be reached. To achieve this or even greater angles, the handlebars are positioned outwards, i.e. to the right. The grip permitted by the 28-millimeter long spikes is unbelievable. However, these spikes are both a blessing and a curse: a blessing as long as they retain their grip, and a curse should the grip slip and a fall is unavoidable. Riders then have to hold on to their handlebars as tightly as possible, since there is nothing worse than being hit by your own motorcycle and impaled by the spikes. For this reason, the riders have a cord attached to their wrist that serves as a contact breaker in the event of a fall, which can mean the difference between life and death. Despite this, the wheel will continue to turn like a buzz saw, causing the most severe injuries. The Kevlar-reinforced suit is not much help here. Some riders try to protect themselves by wearing chain mail shirts. Even Zorn has been impaled by the spikes numerous times. His most painful injury was a broken seat bone, which he sustained three years ago during the Grand Prix in Moscow. Speedway riders are incredibly tough. They can withstand extremely cold temperatures too – at the Russian Grand Prix in Togliatti or Schadrinsk, temperatures of -25 degrees were not uncommon. Zorn and his colleagues wrap their fingers in insulating tape and the cylinder in cloth, so that the icy wind does not cool the engine too much during the race. 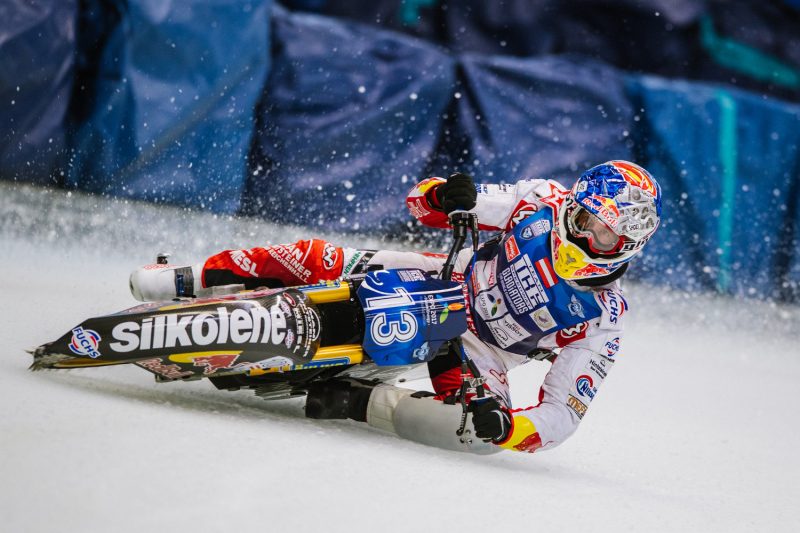 It’s just after five o’clock when the decision is being made in Inzell: The Russians gain the World Team Championship title once again, with Zorn and Charly Ebner Junior from the Austrian team just behind in second place. The best of the rest – Franz Zorn is happy with that. He’s now looking forward to the Grand-Prix finale in Heerenveen in the Netherlands at the beginning of April, just as he was at the start of the 2017 season. In the summer, as he does every year, he’ll train on his KTM 350 SX-F, preferably at the X-Bowl Arena in Stegenwald. And what about 2018? Zorn considers for a moment whether he should give anything away, and then he says: “I might take part in the Russian league.” However, this will require a number of discussions with the sponsors, who of course must be in agreement.

Franz Zorn, the tireless model Ice Speedway athlete. How long would you like to continue in the sport? “Well,” says Zorn, “I might stop at 50.” Bearing in mind that at 46, he is riding faster and with more success than ever. It looks like Zorn has a fair few years left of his career yet. 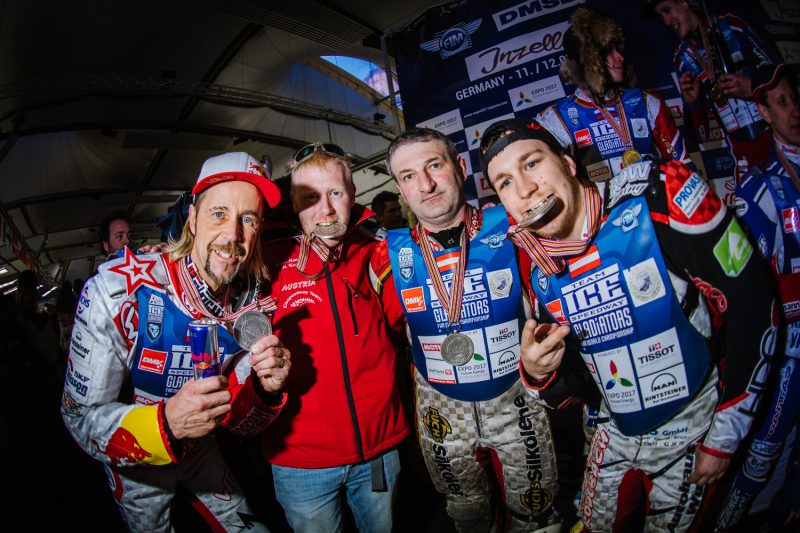 67 Responses to A Zany Character