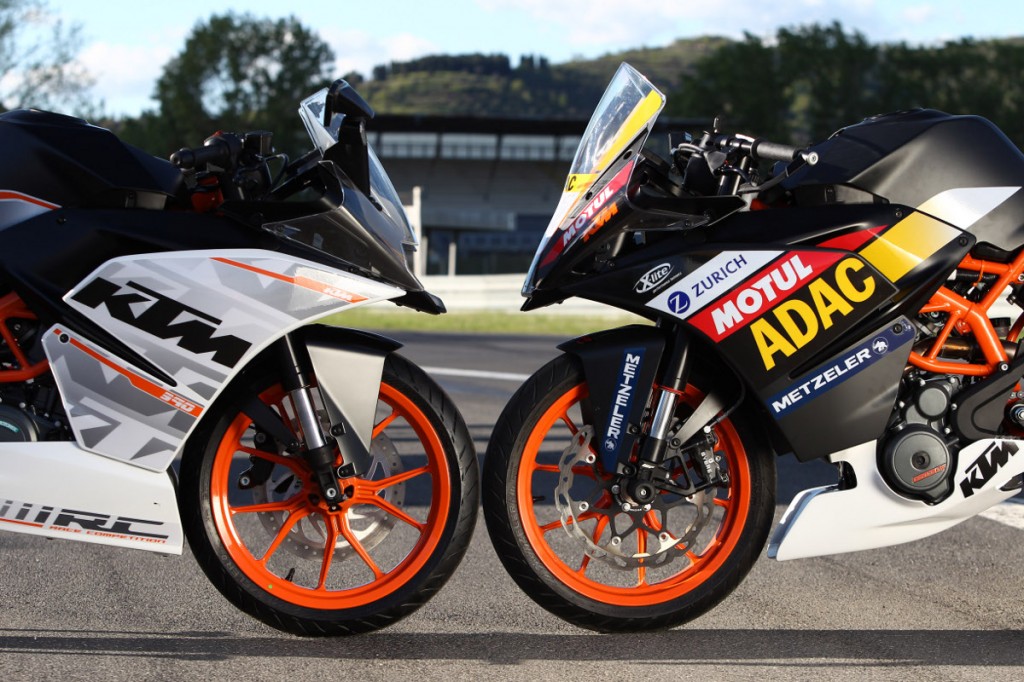 The ADAC Junior Cup is a new junior racing school. After 21 years, the cup switches from 125cc two strokes of several brands to more modern four stroke bikes. The racing machinery for 2014 is provided by KTM – the RC 390 Cup. 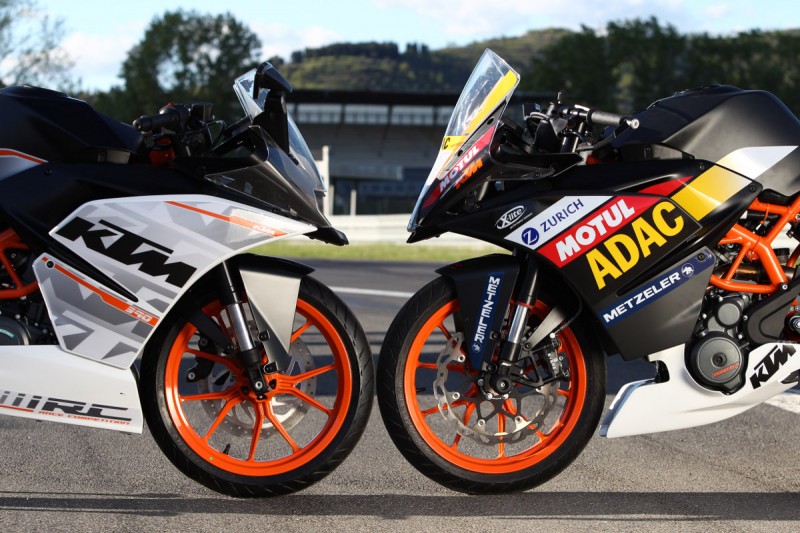 It was definitively an expedient but not a given decision to opt for this bike, since the production version of the KTM RC390 Cup will first be available at the dealers at the end of summer 2014. Therefore many people in Mattighofen put in some extra hours to prepare the Cup bike for the race appearance in advance and in sufficient number for the 27 cup participants (amongst them a female racer).

But what are the differences between the RC390 Cup bike and the production bike? We take a closer look at the modifications. 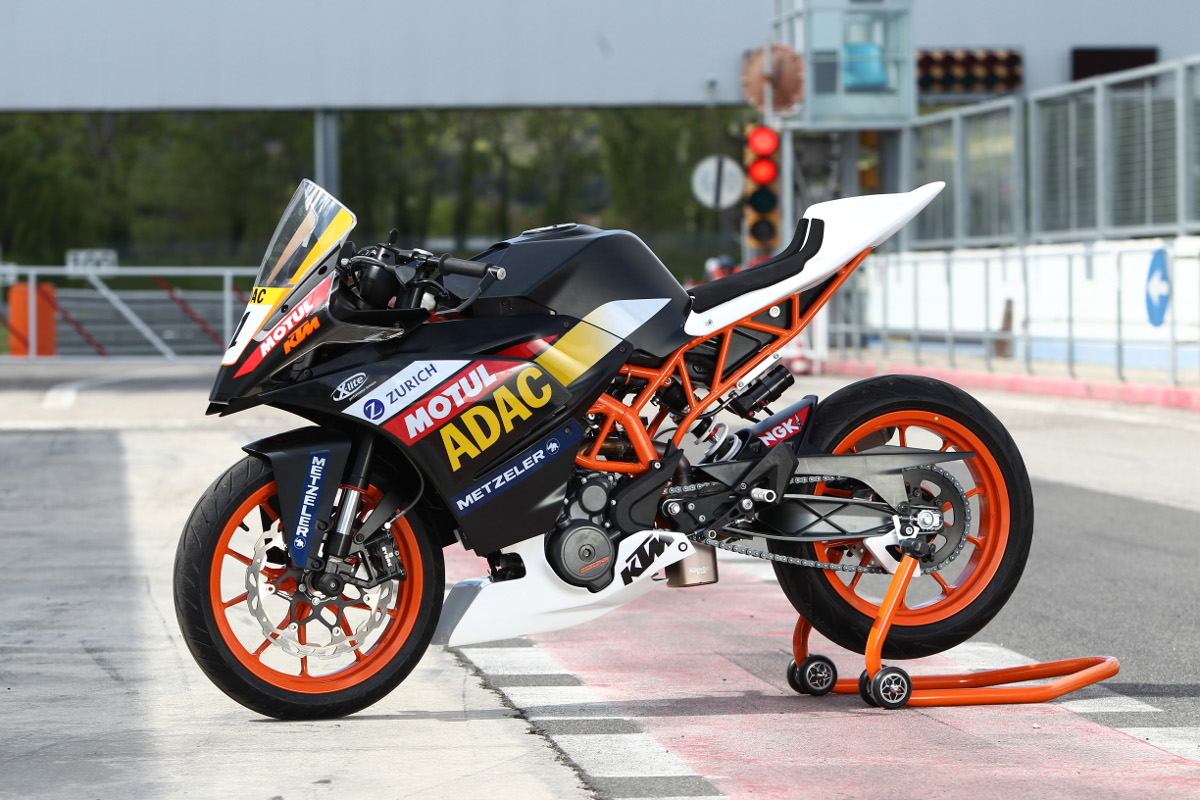 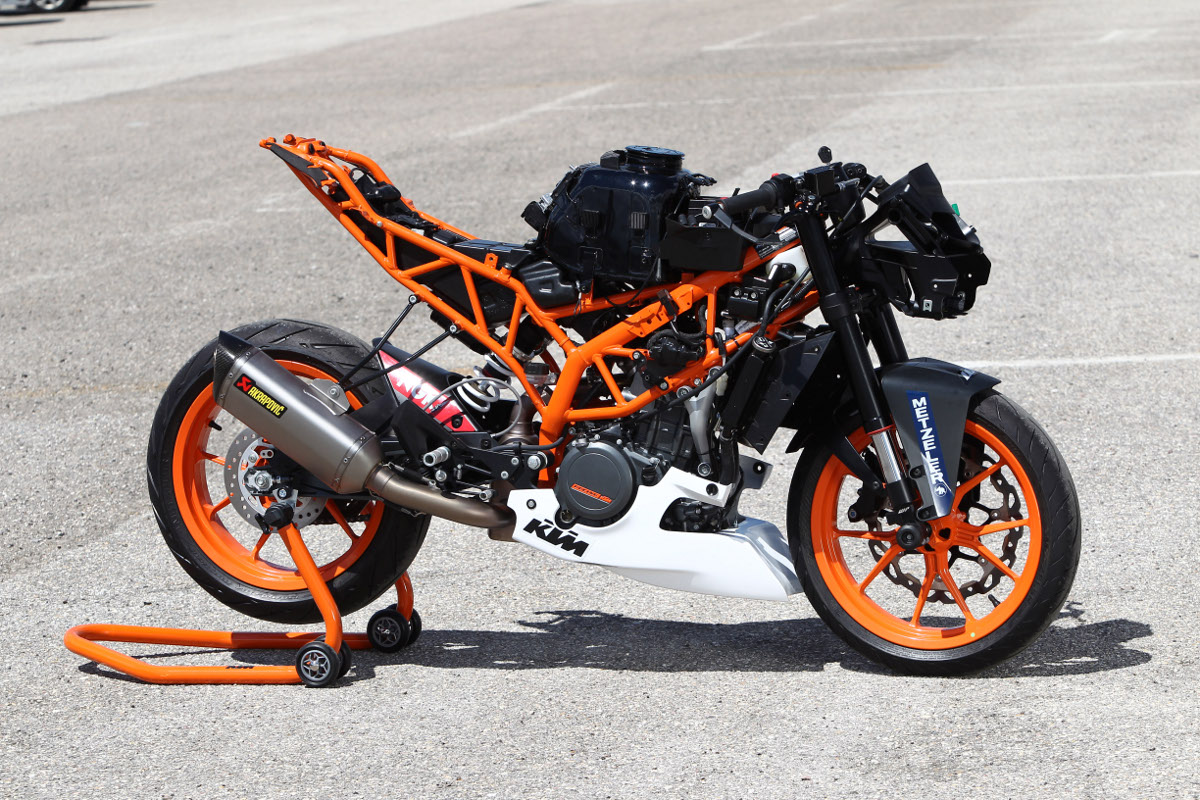 In a first step everything was dismantled what is not mandatory for race track use: headlights, blinker, backlight, number plate holder with fender, side stand, co-rider footpegs, horn, mirrors, seat and lock. A front panel with higher racing wind shield closes the gap in the front of the fairing and in the back was mounted a modern sport seat (made of GRP, carbon-reinforced). 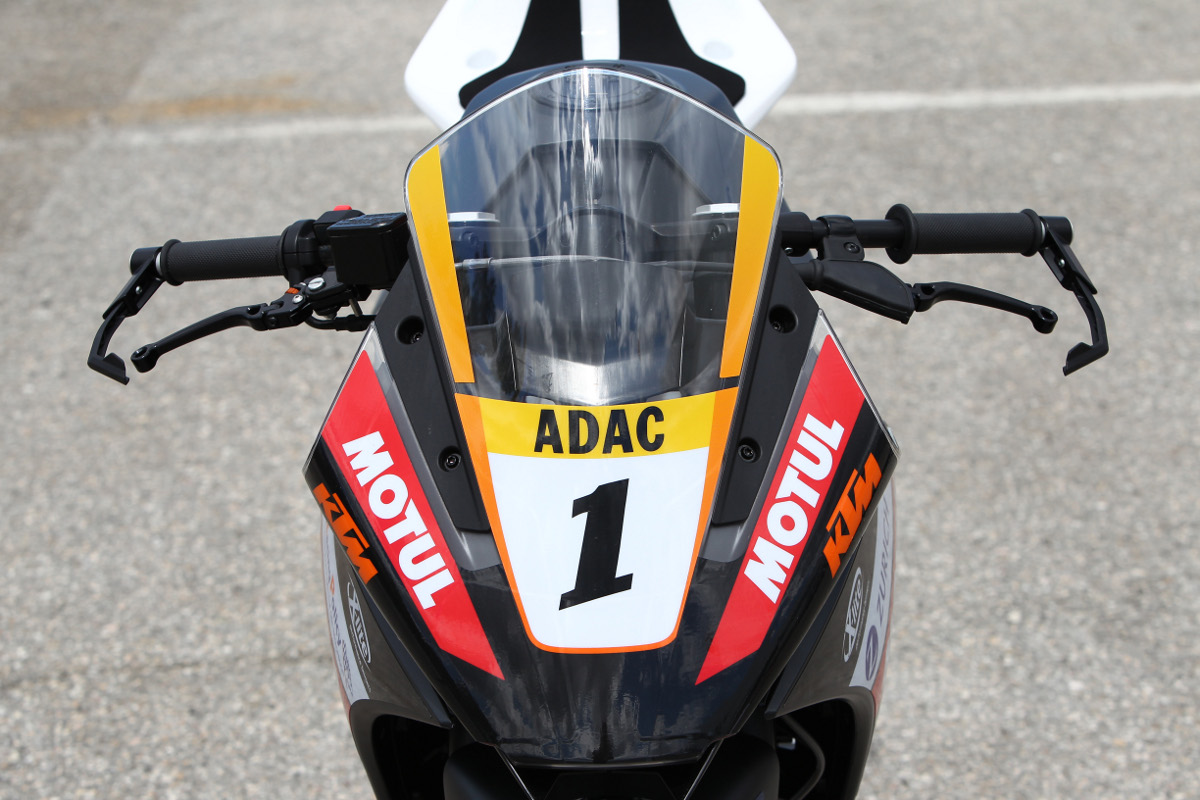 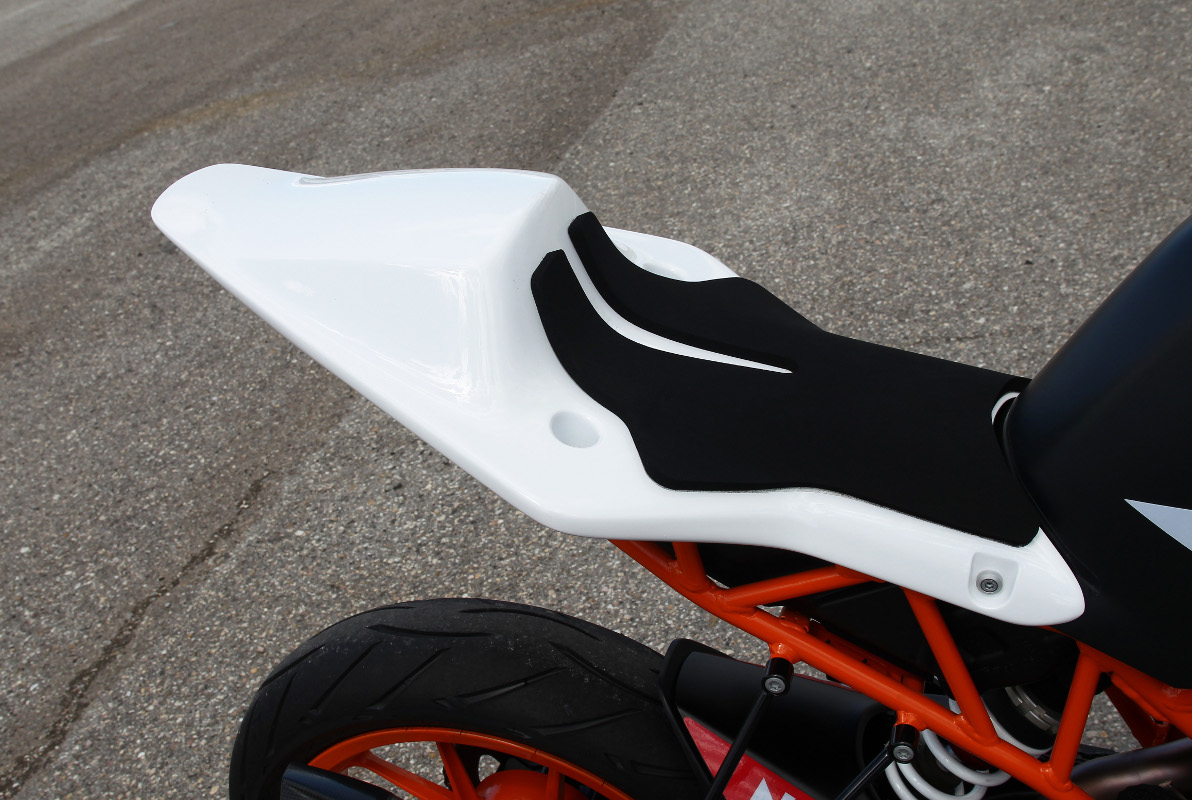 With regard to mechanics the single cylinder four stroke engine is nothing other than the production version. The throttle lever stop and the adjusted injection set-up slightly reduce the horsepower, so that the performance of the cup bike is indicated with 38 up to 40hp at 9000 rpm – more than enough power for youngsters that just started to learn how to race. Depending on the race track this performance is sufficient to reach a top speed of 180 up to 190km/h. The standard underfloor exhaust is replaced by an Akrapovic exhaust system (titanium silencer and central tube including cat). The overall package has been developed with the focus on practical relevance; pullthrough, responding qualities and torque are perfectly synchronized. All engines are sealed in order to prevent unauthorized tuning attempts. 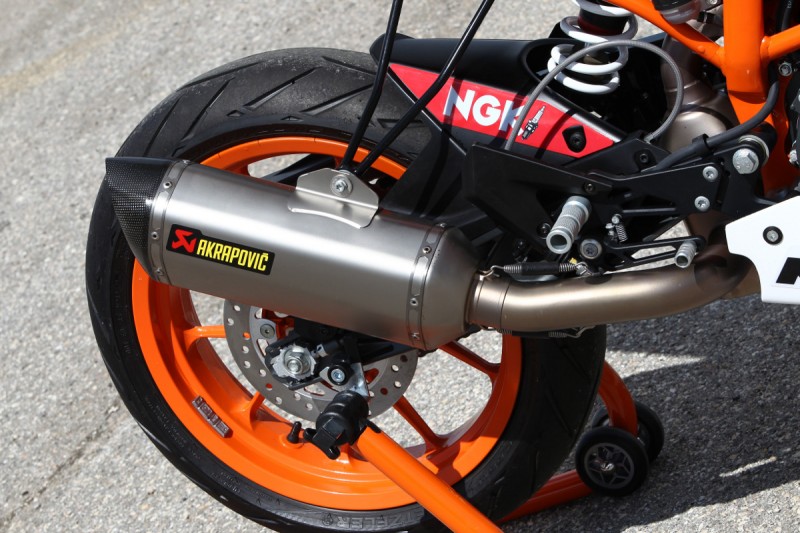 Those who want to turn the standard gear shift pattern (first gear down) just have to take the arm that is fitted on the operating spindle and mount it the other way round. Many racers prefer the reverse gear shift pattern (push the lever down to gear up, raise the lever to gear down), because depending on the lean position while cornering it is easier to gear up. Sometimes this can even be a benefit in right-hand bends, especially when there is not enough space to get the foot under the gear lever. 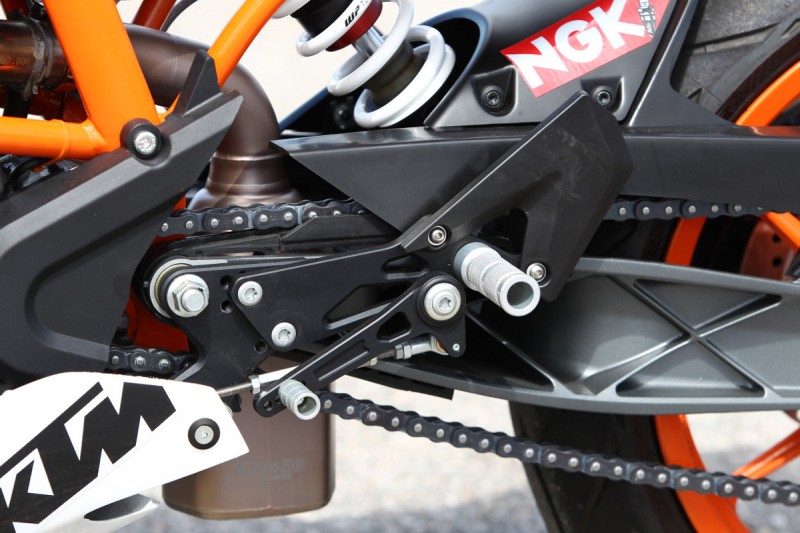 The steel tubular trellis frame is similar to the one of the production bike. The same applies to swing arm, rims and all parts that are located below the bodywork like tank, airbox, battery and electronics. Fork and suspension strut were modified which are now entirely adjustable with regard to spring preload and damping. The WP Suspension wheel control parts are the same as for the Red Bull Rookies and Moto3 bike. Even the front brake pads were providently adjusted to the permanently higher loads while racing by extending the diameter from 280 to 320 mm. The standard brake caliper was lifted by using spacer bushings on the adapter at the forkleg respectively. 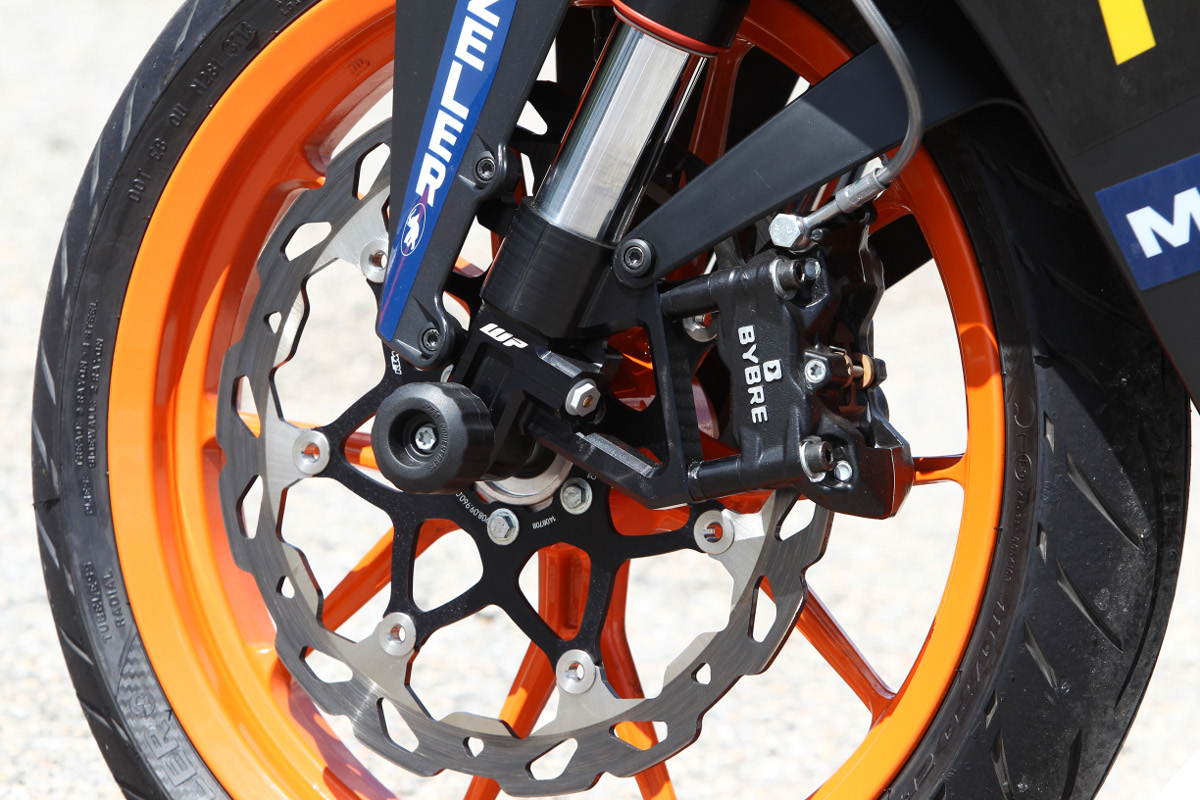 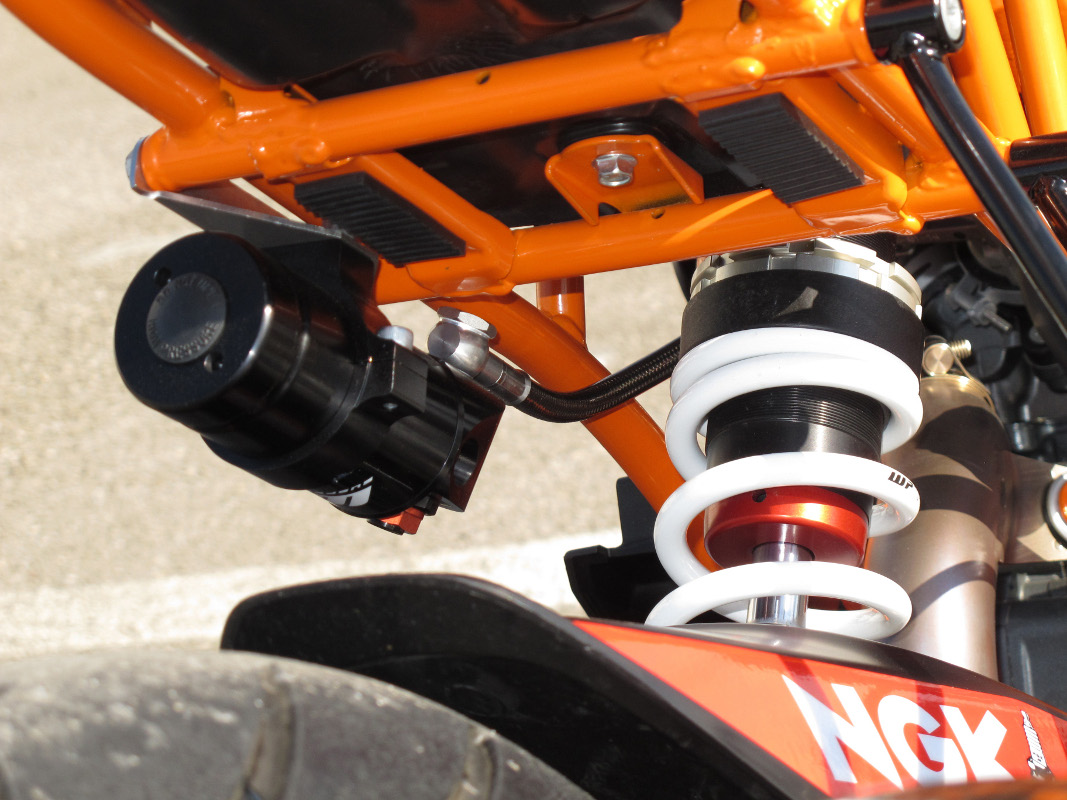 During the winter months, Thomas Gradinger, Moto3 racer and KTM apprentice at the same time, tested the bike several times on four different race tracks in Spain and Italy. As a standard the front suspension is designed for a weight of 63 to 65 kg, but a softer and a harder option can be chosen alternatively. The damping on the rear wheel strut with separate reservoir bottle can be adjusted according to high and low speed.

The footrest system that is further relocated to the back, hand levers (foldable and adjustable), lever hoop guards left and right and the knee slider can be found in the KTM PowerParts range. In this context it is worth to mention the sturdy design and resilience while slipping. During the introduction course in the Italian town Magione one could already observe several small crashes; even at the press test for European journalists a tester was roughly brought down to the ground. In short: The Cup bike can take several pokes, scarcely anything happens except some scratches at levers, axle pad, foot pegs and exhaust. 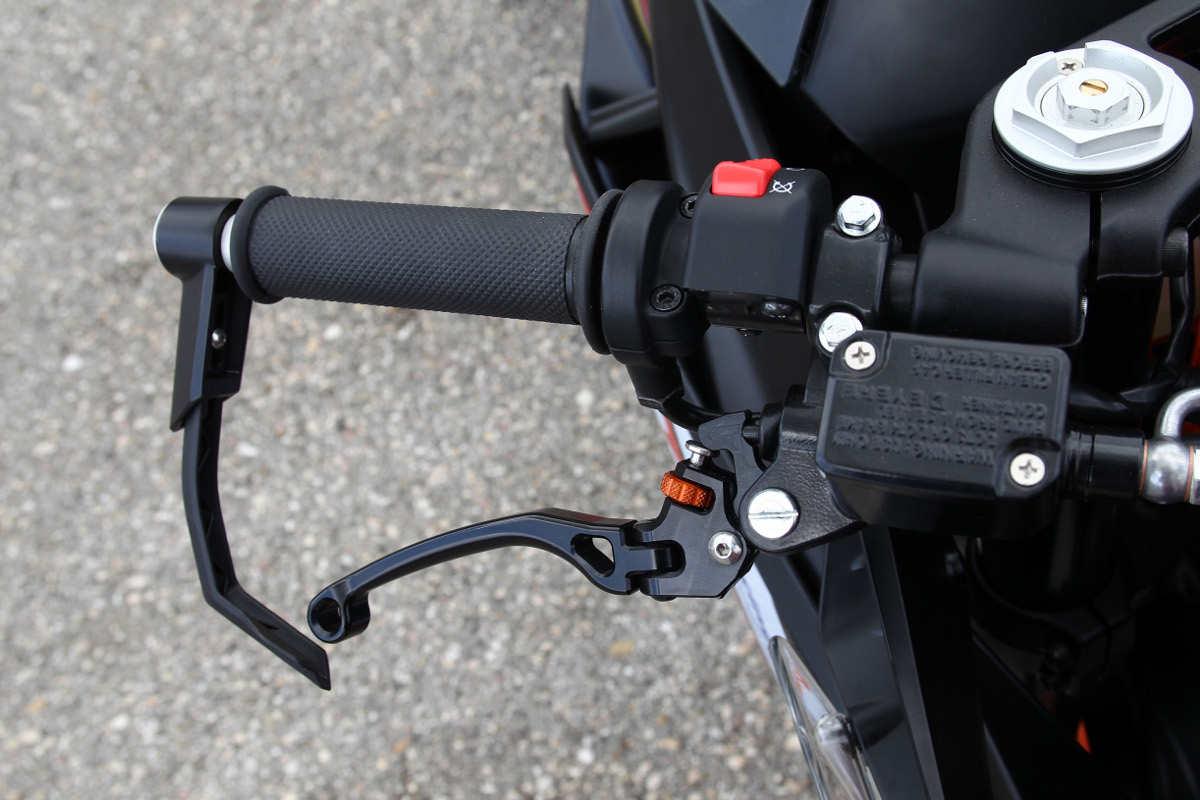 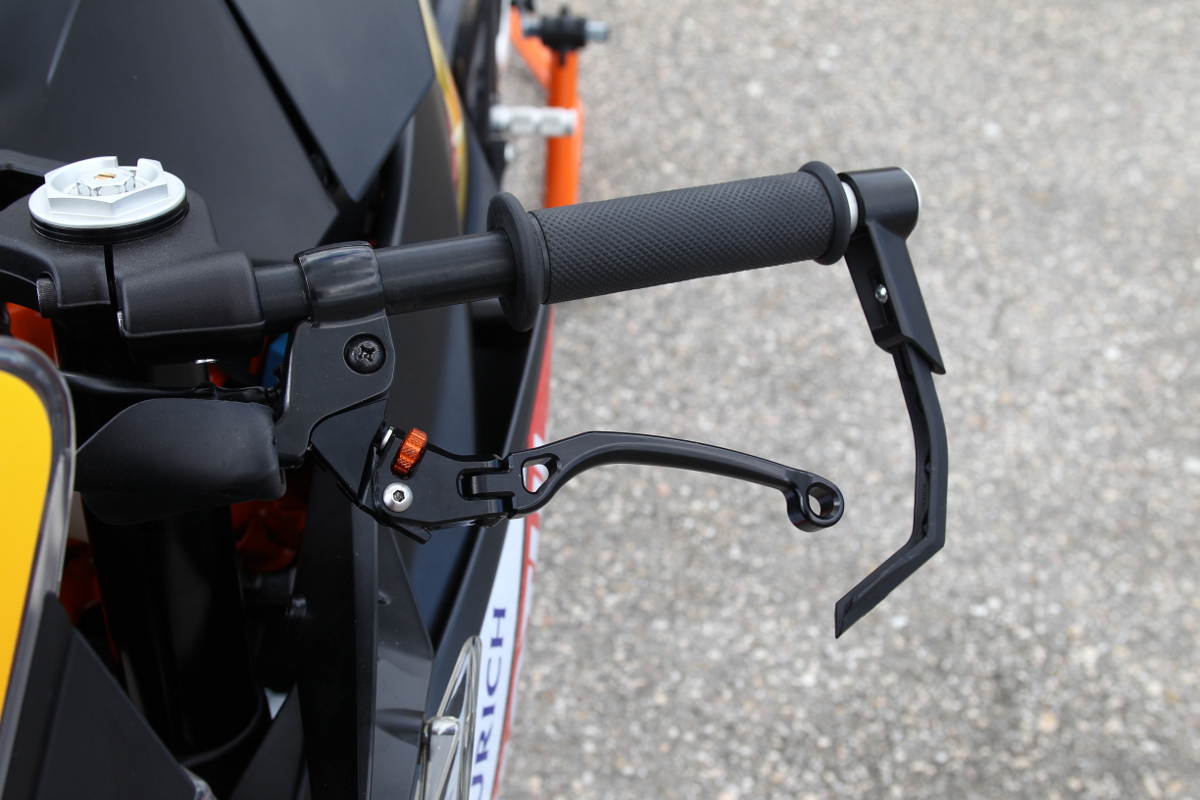 Choosing the right racing tyres is always a difficult issue. On the one hand racers can´t get enough grip, on the other hand wear and above all the costs should not get out of hand. Instead of the Metzeler Sportec M5 are now fitted Metzeler Sportec M7 RR tyres, that are also available for purchase for the average consumer. With regard to performance and durability they seem to be a good compromise for the junior cup youngsters – even when it starts to rain, since there are no special rain tyres. In order to keep the costs within reasonable bounds it is prohibited to use tyre warmers.

An interesting detail: The throttle lever is taken from the KTM RC8 R. Instead of coolant with antifreeze-admixtures is poured-in distilled water. The instrument unit at the cockpit with tachometer and indicator lights remains at its place, however is pasted over by a foil that covers the space of the switched off dashboard. A chain guard prevents that something get tangled up in the chain in case of a crash. 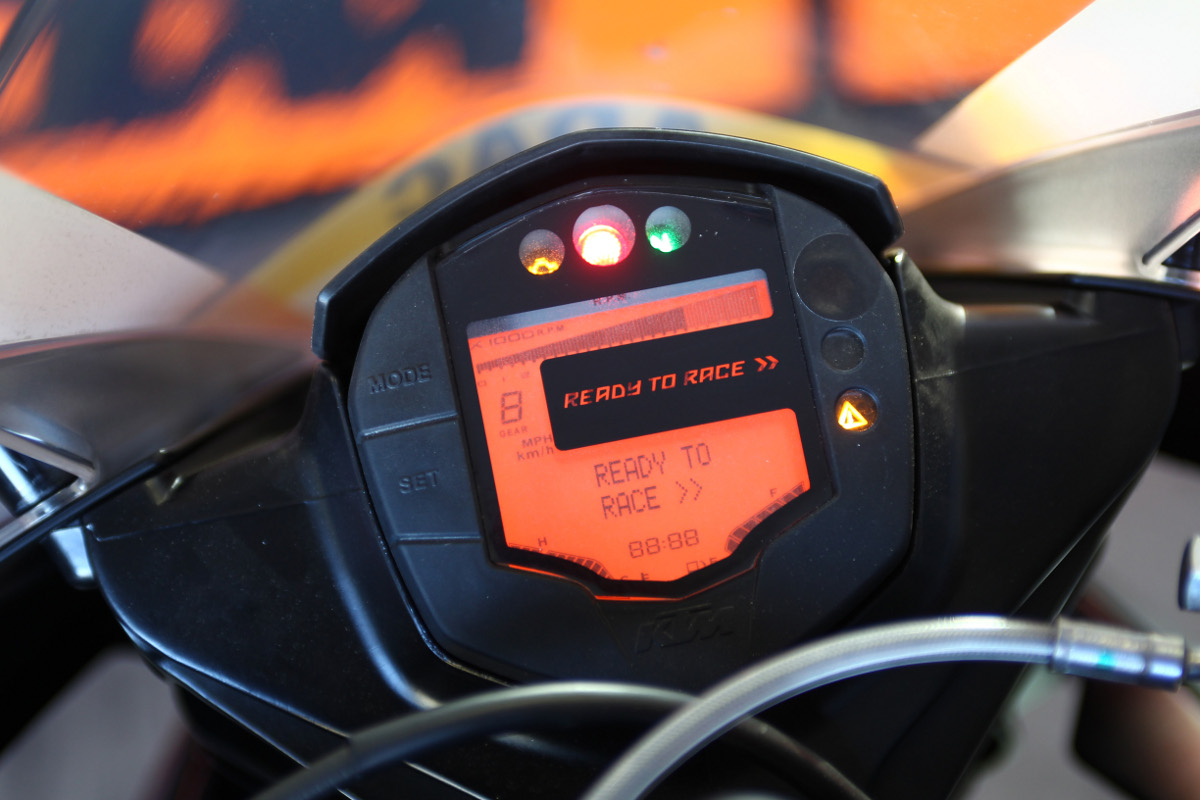 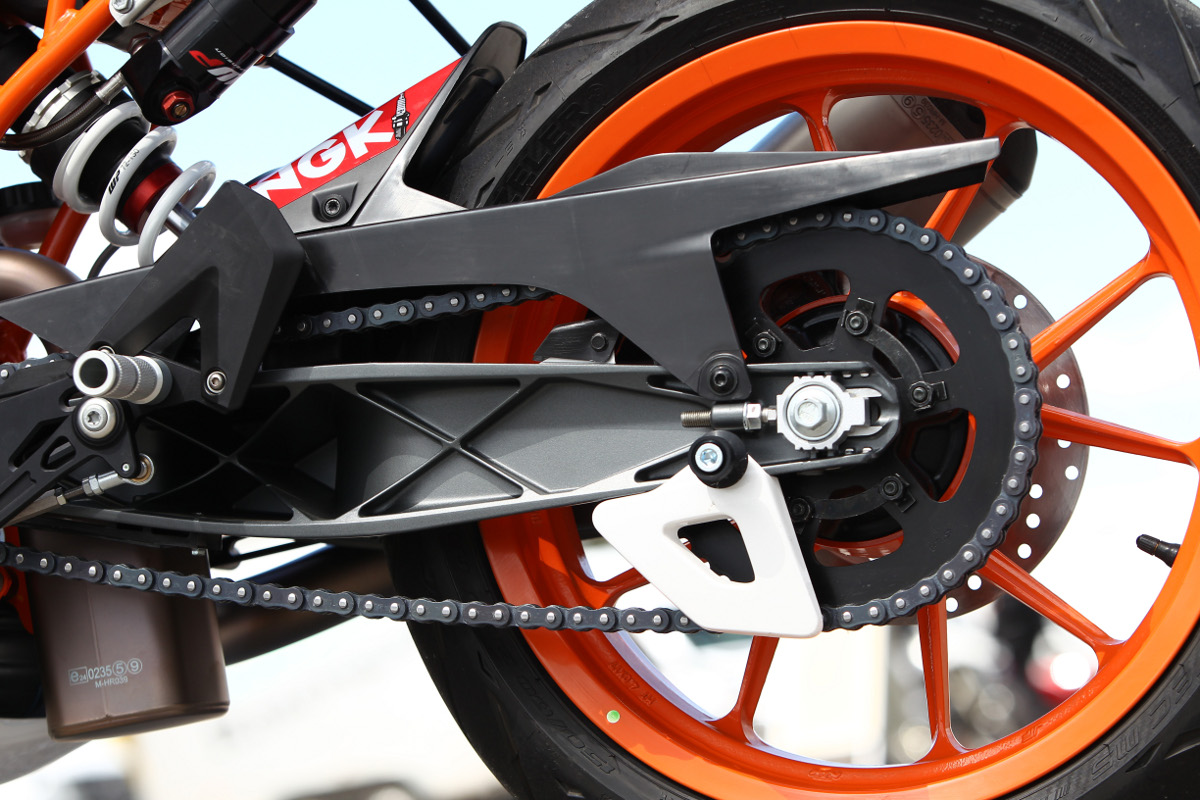 The faring is closed by a bow spoiler that is implemented as a trough. This specification is required in the regulations of street racing just in case of an engine damage to prevent that oil is leaking out the engine. Only at wet raced it is allowed to remove a plug at the bottom, otherwise the collected rain water would constantly slosh back and forth, what can be dangerous when riding at the limit. 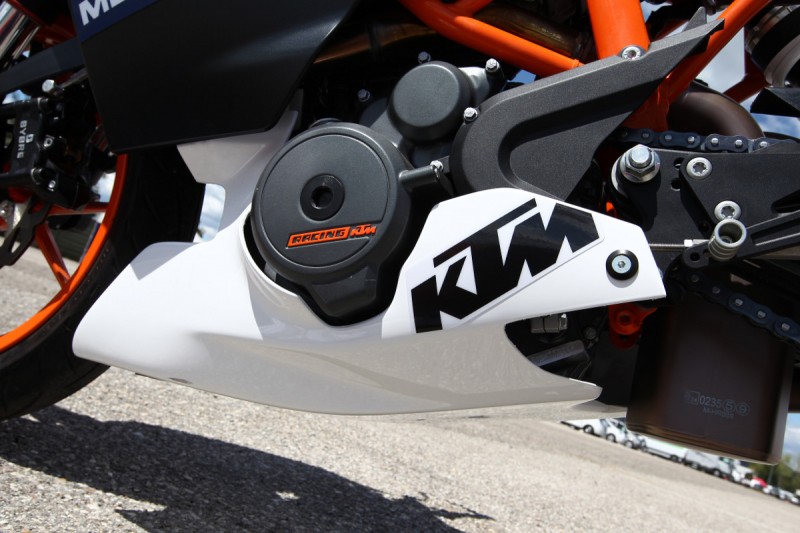 In respect of weight applies the following: whether with or without fuel, whether before or after the race – the KTM RC390 Cup may not come under the minimum weight of 136 kg. It is allowed to mount a laptimer (produced by Starlane), but not to install a mini onboard camera (e.g. GoPros), not even the mounting.

At the end of the day, the KTM RC390 Cup meets all requirements that are imposed on a race bike for young talents: dynamic riding performance, great handling, safe and predictable within the threshold, without technical problems, reliable and sturdy. Thanks to large-batch technique the costs are kept within reasonable bounds, likewise the costs for the supply with wear and spare parts. The KTM RC390 competing in the ADAC Junior Cup powered by KTM costs EUR 6500; the entry fee for the whole season, including introduction course and 8 races, cost another EUR 2490. 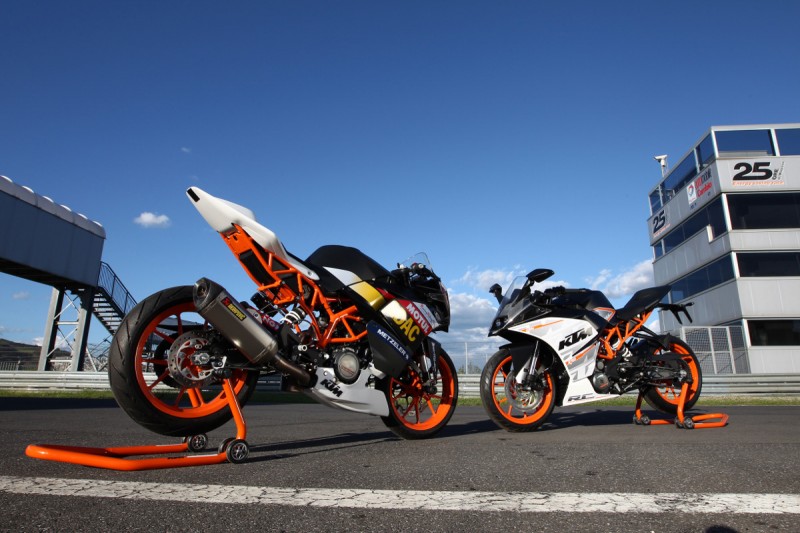 All race talents aged between 13 and 21 who are interested in the ADAC Junior Cup and want try out and gain first race track experiences, basically have the opportunity to compete in the Cup (B-licence or day licence); the costs for a guest appearance amount to a lump sum of EUR 990.