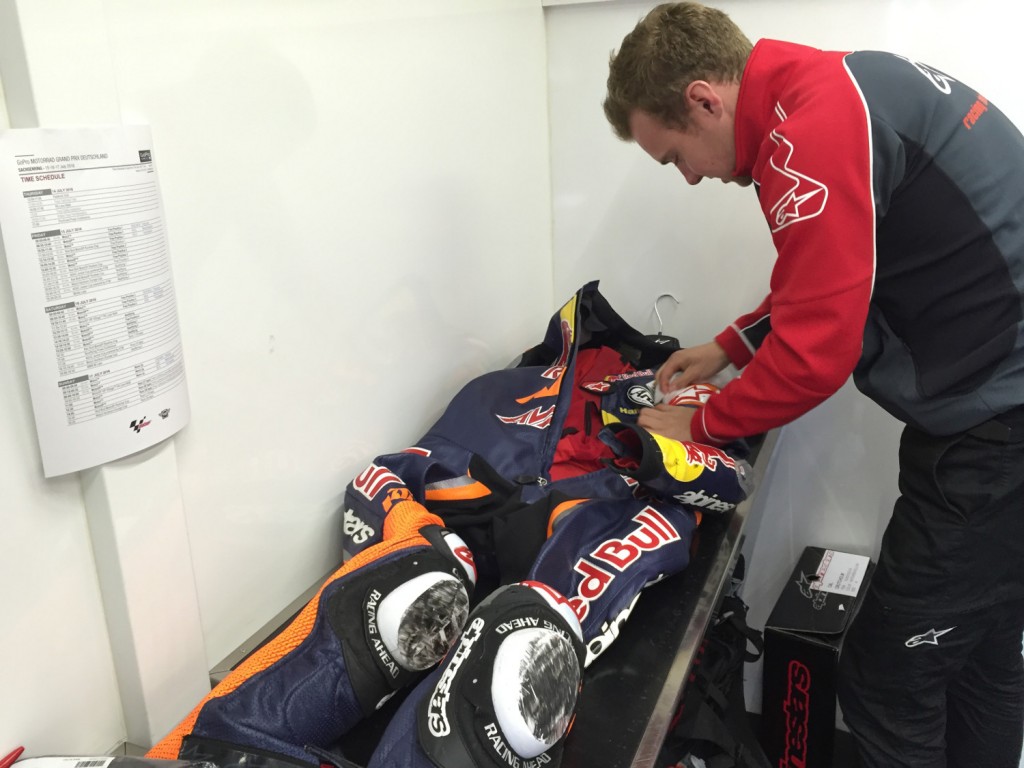 Alpinestars provides some of the most advanced racing equipment in the MotoGP paddock and Red Bull KTM’s Bo Bendsneyder is under the company’s umbrella. We asked the motorcycle safety specialists what goes into protecting a Grand Prix athlete …

While people are eating and meeting in Alpinestars’ popular MotoGP hospitality a team of five technicians are constantly toiling away in workshop area behind the food and refreshments. Among the racing technicians is new recruit William Mitham – part of the crew that looks after the Grand Prix riders, including Moto3 rookie Bo Bendsneyder – work and repair a raft of leather suits, boots and technical products that help keep racers in the saddle and out of the medical center. 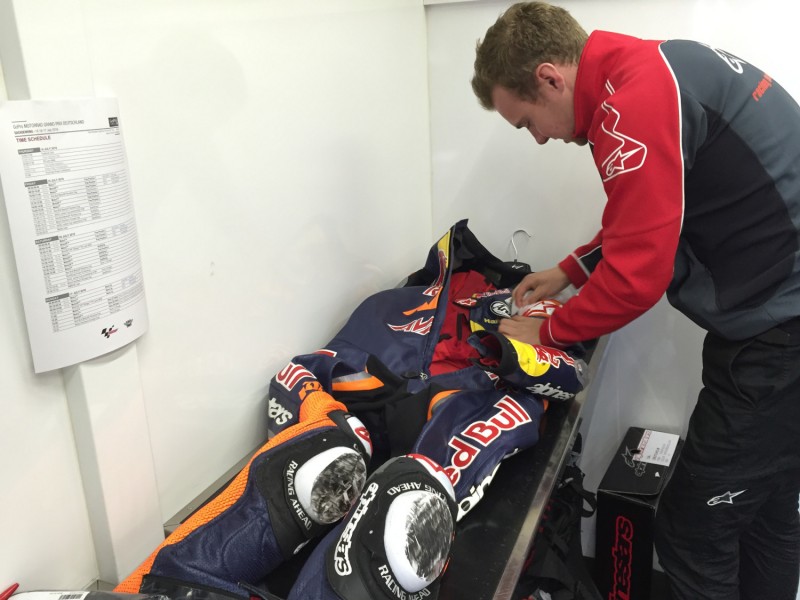 After entering MotoGP at the end of the 1990s with their first suits (Carlos Checa was the original racer to use more than just Alpinestars’ renowned boots) the multi-national firm now have a large cross-section of the grid and are famed for the quality and commitment of their racing support service; that also doubles as a mobile R&D unit.

Mitham is a frequent sight in the KTM box due to Bendsneyder’s affiliation with the firm. “Each rider has around three suits each and we have nine athletes in Moto3 and eight in Moto2,” the former young motorsport engineering student says. “This is a difficult type of engineering; the complexity of the suits and what goes into the design and construction. To cope with the speeds now in Grand Prix the suits are at a high level.”

Alpinestars has a suit for customers that is technically just like the one used by Grand Prix stars – the GP Tech – but naturally the material shrouding Bendsneyder’s tall frame is a custom job. “We take measurements at the beginning of the season for each athlete and the suits are made around those and then we might have to make some adaptations during the year – especially for the young athletes that are still growing and building more muscle mass – so we do that by measuring again at the track,” Mitham says. “We measure from the center of the body and below the hips and then the entire upper body. Everybody’s body structure is different so it is very individual and all the panels are made for each person.”

“Bo is a taller athlete so the material needs to be longer and larger and that includes the back and chest protectors and under-suits and socks,” he adds. 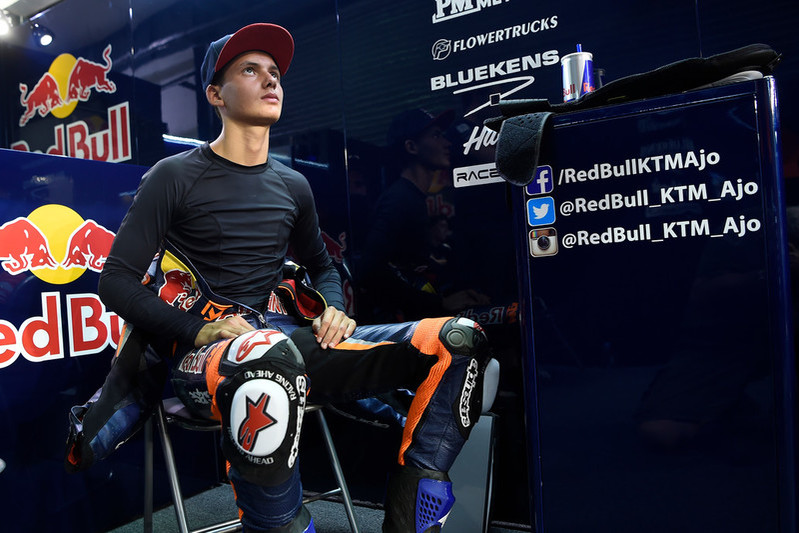 Like a mechanic facing the prospect of a damaged motorcycle after a crash, Mitham and the technicians also need to make an assessment in the wake of a tumble. The suit is an important and technical element of a racer’s overall package. “We’ll go and see Bo in the garage and check the suit,” Mitham reveals. “If there is some damage from the crash then we will bring it back here and repair it so he can go back out in the same gear. Some riders like to use the same suit; it is a mental thing. If they have good results in one then they stick with it. Otherwise they’ll use a new one and we’ll return the suit back to Asolo [Alpinestars HQ]. Generally the riders keep the suits and we take them back when they need adjusting or if there is wear then we repair them.”

What about hopping between one suit to the next? Aren’t there some breaking-in or comfort issues to be addressed? “There isn’t any issue with comfort because all the suits have a high-quality fit, they are all the same and made from the same panels,” Mitham continues. “We can build a suit in one day and if you have a lot of crashes then it can get busy!” 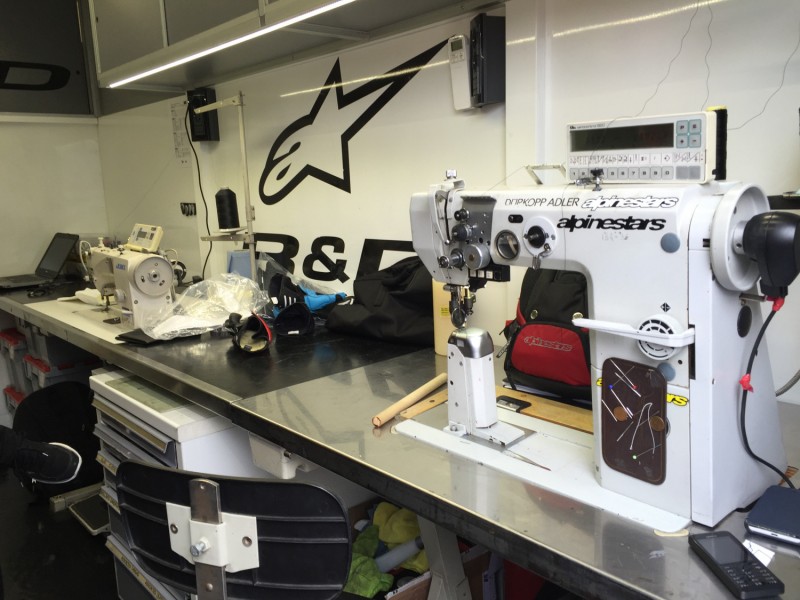 Repair is one aspect of the job, gaining information on new or prototype parts might be another but then there is also overall maintenance for an ‘outfit’ that has to perform and is being stressed. “[knee] Sliders depend on the circuit; some wear more than others and at a place like Sachsenring then the left side wears quicker. One lasts three sessions on average because the guys use the softer compound material. While Bo elects not to use an elbow slider because he doesn’t like to get his arms out that much and in Moto3 it is not that necessary, the elbow guard is still an important feature as it protects the lower arm construction of the suit and offers extra protection. The suit fits so well that when he is in the tuck position then everything is very aerodynamic.”

Riders are also moving ‘ad boards’ to some respect and Alpinestars use a special printing system that means the scheme, logos and sponsors are well located without compromising the weight or surface area of the suit. Each set of leathers might be incredibly personal but there are also extra touches specific to the athlete. In Bendsneyder’s case this is not too extreme. Mitham: “Bo doesn’t have too many personal requests but he likes the same colors as when he won the Red Bull MotoGP Rookies!” 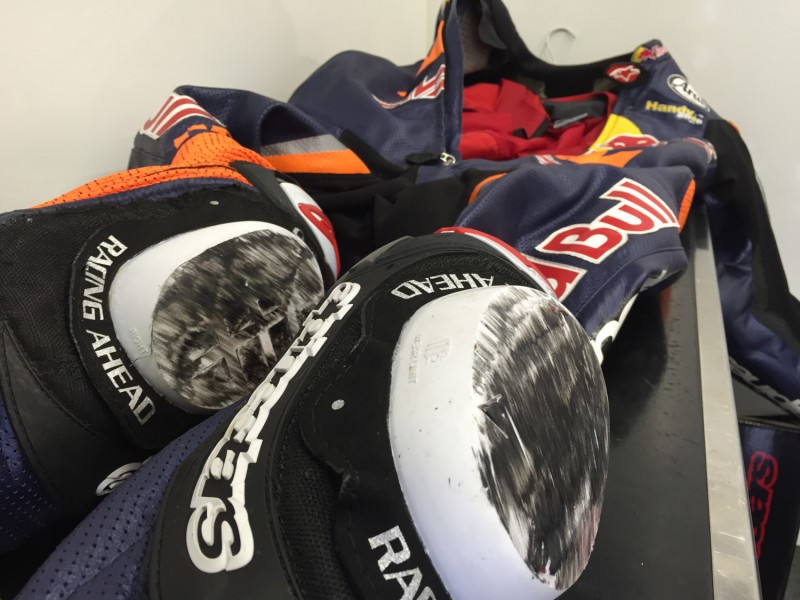 As well as the suit Alpinestars are also working on the rider’s airbag system that is now reaching a third generation. The Tech-Air system provides full body protection thanks to a complex set of algorithms, software and sensors that react instantaneously in the event of a rider suffering the initial phases of a crash. The evolution and maintenance of the software in MotoGP is another part of Alpinestars’ remit and commitment to the sport and the material is now also available to customers.