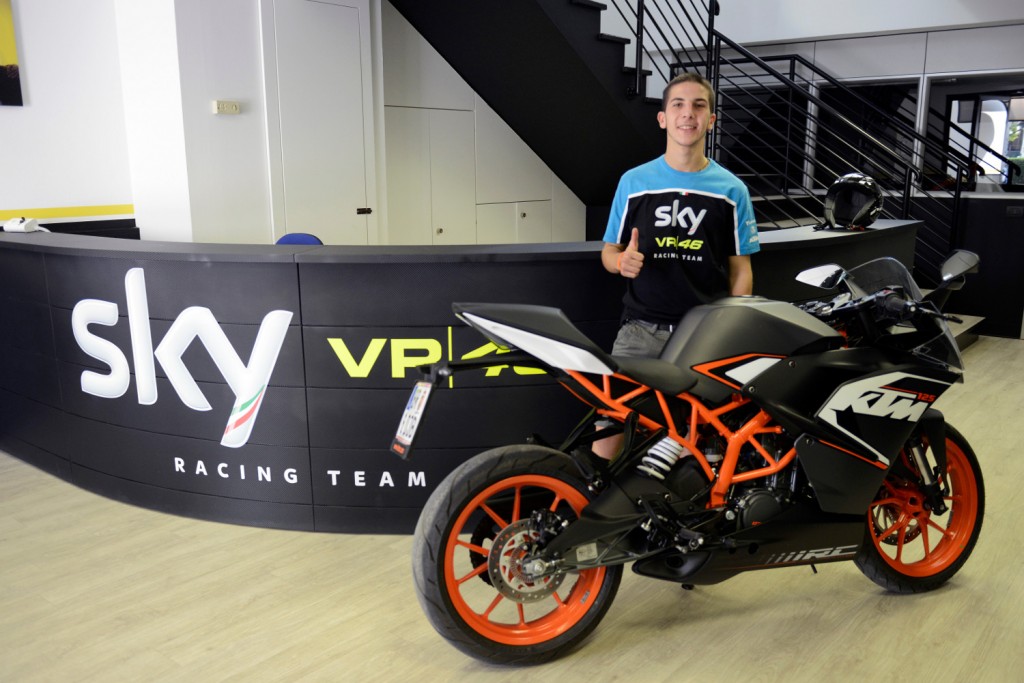 Born in Saludecio (Rimini), 19-year-old Andrea Migno started out with minimoto racing at the age of eight before moving on to more serious racing in 2010, finishing sixth in the Honda 125GP Trophy. 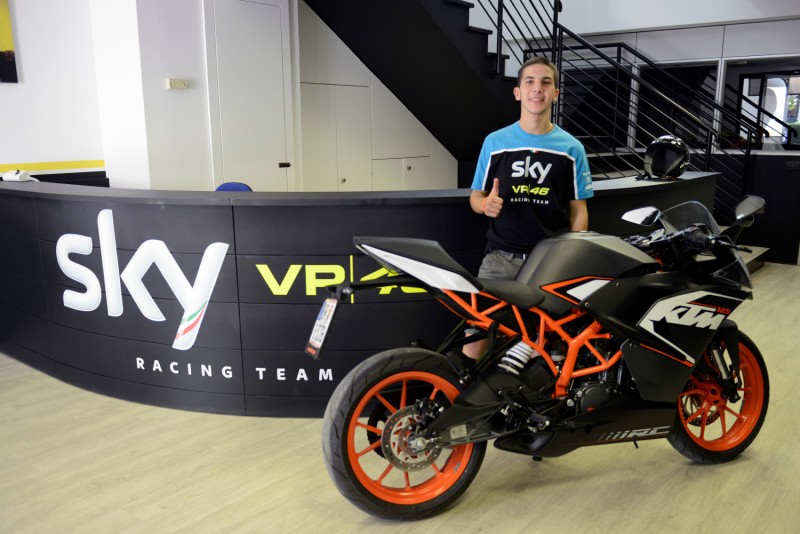 In 2011, his career took on an international dimension with his participation in the Red Bull MotoGP Rookies Cup and the final two rounds of the CEV Championship. In the latter, Migno finished second at Jerez.

In Spain, Migno moved up to the Moto3 class. The reward for his consistently improving performances was an 8th place finish in the 2013 championship. In 2014, Migno joined the VR46 Academy, the brainchild of Valentino Rossi. Migno rode a KALEX-KTM in the FIM CEV Repsol Championship and was a consistently high finisher.

His good performances attracted interest from Mahindra, who took him on to replace Arthur Sissis at Silverstone and then for the remainder of the 2014 Moto3 World Championship season. His 8th place finish at Misano was enough to convince Sky Racing VR46 to offer him a contract. In his debut season as a factory rider, Migno will be riding alongside Romano Fenati. 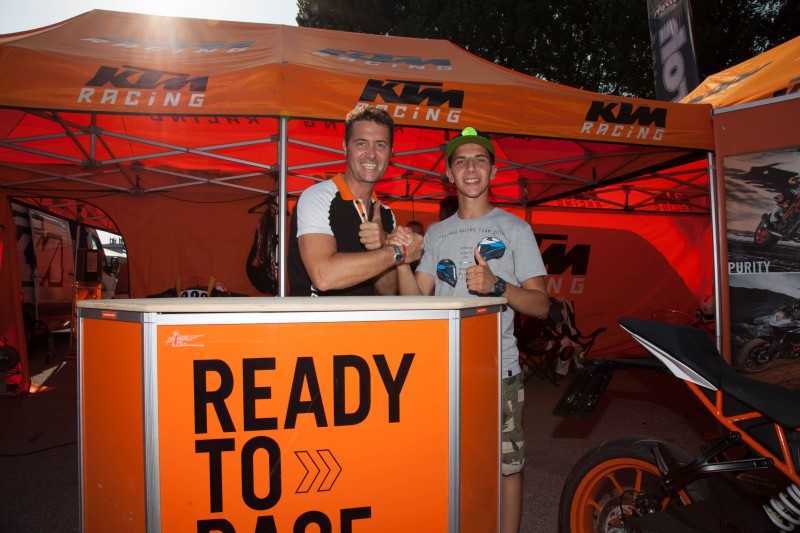 Andrea, what first attracted you to motorcycling?
“My passion for motorcycling began the first time I passed by the minimoto circuit close to my home. I was about eight years old and it was love at first sight. Every time we went past the circuit I would ask my dad to let me have a go on one of those small but very fast motorbikes. I kicked up such a fuss that, in the end, my parents gave in and let me have a go.”

Who was your hero back then?
“Do you really need to ask? Valentino Rossi, of course!”

You get to see him quite often now. What’s he like?
“Vale is a special guy. He’s like a big brother. We have lots of fun and he’s always giving me the right advice on how I can improve. He gives you a real sense of confidence. He’s a real motivator!”

How did you end up at the VR46 Academy?
“In 2012, I had a few problems with the team I was racing for and one of Vale’s (Valentino Rossi) friends asked me to come and ride the CIV, the Italian speed championship. Unfortunately, I crashed and broke my collarbone. I was out for a long time and whilst I was at the gym getting back into shape I met the VR46 Academy fitness coach. In short, a problem gave rise to a great opportunity!”

We’re all curious as to what you get up to at the Motor Ranch. Rossi aside, what makes the place so special?
“For us VR46 Academy riders, it’s a sort of training camp on our doorstep but, in fact, it’s much, much more than that. It’s a place where you can nurture your passion and, frankly, it’s the best place in the world! We train hard but have lots of fun. I perfect my technique on a KTM 450 SX-F MY15 (with modified rims and suspension to suit the Ranch track). I’m very happy with the bike as it always guarantees me everything a rider needs: great traction, a great engine and … great wheelies!” 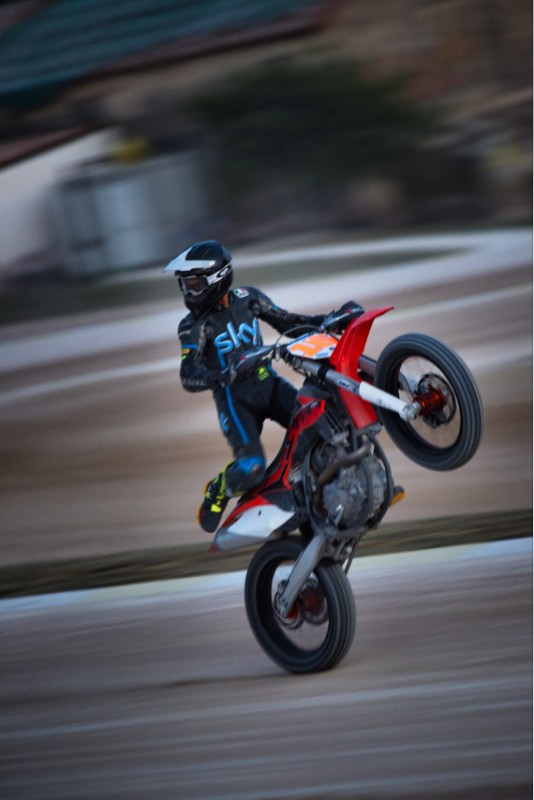 How do you rate your 2015 season with Sky Racing Team VR46?
“I’m optimistic, my results are improving. Every race is different and I’m learning from each one but I think that so far I’ve performed well. I’m pretty happy and confident but remain focused and want to improve. It’s part of my character; I’m never fully satisfied and I always want more.”

What do you like about your KTM RC 250 GP?
“The first thing that comes to mind is that the RC 250 GP is a bike that commands respect. It’s very sensitive to any adjustment you make. It has a great engine and the frame is a little more difficult to control but, once you get the hang of it, it does exactly what you want it to do!”

Misano is on the horizon. What’s a home GP like for you?
“It’s certainly not just another GP. There’s more passion, more atmosphere and more fans. You can really feel the warmth and support of the crowd.”

The Motor Ranch aside, Misano is the circuit that you VR46 Academy riders practice on. Seeing as you can’t always ride your race bike, you also use KTM road bikes, don’t you?
“Misano is a great circuit for fine-tuning your preparations and after the twelve days of sessions that we organized together with the Italian Motorcycling Federation, I reckon that I could even ride round there with my eyes closed! And then there’s the RC 390 …”

How do you rate the RC 390 CUP?
“It’s very good! It performs well, it’s an enjoyable ride. It’s an easy bike to ride and is perfect for training. All of the VR46 Academy guys really like it.”

Do you think it has anything in common with your RC 250 GP?
“Well, the RC 390 is a far cry from the bike I ride in the Moto3 World Championship but you can immediately feel that it’s READY TO RACE. It rides like a sports bike, has a strong, high-performance trellis frame, you can widely regulate the suspension, the brakes are great … I like it!”

Would you recommend it as a reasonably priced bike for youngsters who want to start racing?
“Yes, definitely! It’s a perfect first bike for learning how to race on a track and it’s a KTM so it’s a good springboard for higher classes such as the Rookies Cup. I was at Imola for the CIV race which featured several KTM RC 390 CUPs and you could tell straight away that the riders were enjoying themselves and taking the racing seriously even though they were riding mass-production bikes.”

Let’s talk about your daily life. What does a typical day look like for you amid training, work commitments, friends etc.?
“In the morning, I sort out a few things and then go and train either in the gym or at the Ranch depending on my schedule. Besides that, I’m a normal 19-year-old guy. I spend my free time with my friends, spending hours out and about in the evening chatting about motorbikes or at home playing on the PlayStation. I think I’m quite a calm person but that doesn’t stop me from enjoying myself and spending time with my friends.”

You live in an area where motorbikes and motorsport are part and parcel of the local culture. How do you get around on a daily basis?
“I ride a KTM RC 125 which I was given by KTM Italy. A motorbike is crucial for getting around, especially in the summer. I live just a few kilometers from the beach so there is plenty of local and tourist traffic. That makes being on two wheels a definite advantage!”

What do you like about the RC?
“I get a real kick out of it. You can tell that it’s a new model: it’s modern, safe and a great ride. It’s comfortable even with a passenger on board, it handles well and is a great bike for getting around on a day-to-day basis. The other guys at the VR46 Academy like it too. I can see that they’re a bit jealous.” 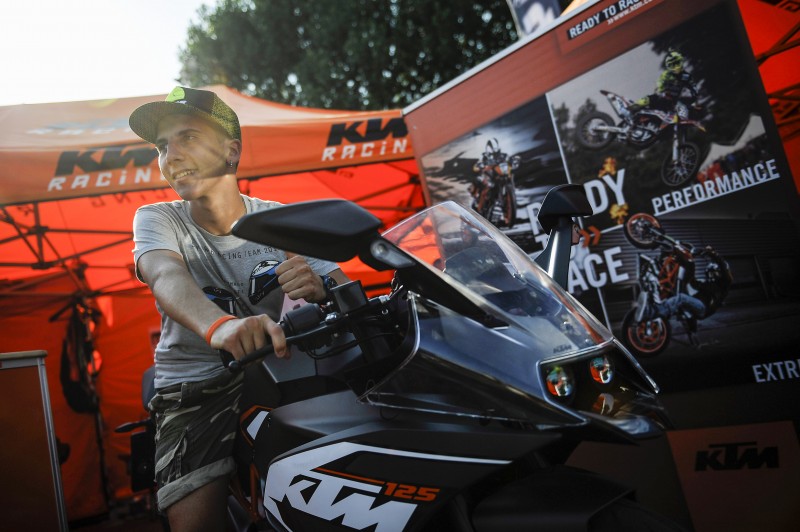 Given that you race in the Moto3 class, do you not find the RC 125 a bit slow? You could ride a 390!
“In my opinion, a 125cc bike is more than sufficient. Sure, the RC 390 has more power and faster acceleration, but on the 125 cm³ I can relax without going too fast and taking any risks! I only have to go fast on the track, so when I ride in the hills close to home I’m happy even with the 15 BHP of the 125.”

Is it really true that young people are not interested in motorbikes anymore?
“Well, I am very passionate about anything that has an engine so I certainly don’t agree with that statement. However, I must unfortunately admit that motorbikes are not as ‘in’ as they once were.”

Everyone has their eyes glued to their smartphones and social media.
“Yes, it’s true. Today, young people communicate via social media instead of going out to meet up. They now meet up “virtually”. As I was saying before, I’d much rather go out with my friends, just like you did all those years ago, isn’t that right, Paolo?”

But you’re on social media and race motorbikes …
“Yeah, the two things can go together perfectly well! But I’m a real die-hard motorcyclist. I don’t care if it’s wet or cold; I just cover up and jump on my bike. It’s my passion and, as I often tell myself, you have to follow your dreams, whatever they may be …”

What do we as companies need to do to revive interest in motorcycling amongst young people?
“I don’t know. I don’t have a crystal ball. It comes down to passion: either you’ve got it or you haven’t.

Obviously, if motorbikes were free of charge it would be different but since that’s not the case, the motorcycle industry, just like many others, is having a tough time. I must admit that the economic crisis is not a good thing for motorcycles as they’re often seen as a “superfluous good” and the state of the roads and the traffic at times puts people off buying a motorbike and makes them more inclined to buy a car instead. But who knows? Maybe in ten years’ time it will be completely different!”

At Brno, we saw you sportingly celebrating Honda rider Niccolò Antonelli’s win. He’s also part of the VR46 Academy project. It would appear that real friendships are blossoming between you riders. Is that the case?
“I had the same feeling in the paddock at the CIV race at Imola. The guys riding the Italian Championship gave me a warm welcome. After all, you’re only rivals on the track, right?

Absolutely! On the track, we’re all rivals right up to the checkered flag but then, by the warm-down lap, we’re all friends again. That’s the beauty of our sport, or rather sport in general. Of course, the stakes are high but we’re all young guys and for young people, fun and friendship are fundamental values, right?”

Finally, Andrea, aside from motorbikes and spending time with your friends, do you have any time for the “fairer sex”?
“Of course! I’m part of the “WLF” club. We’re young and we want to have fun, so we’re all about motorbikes, friendship and, of course, girls!”