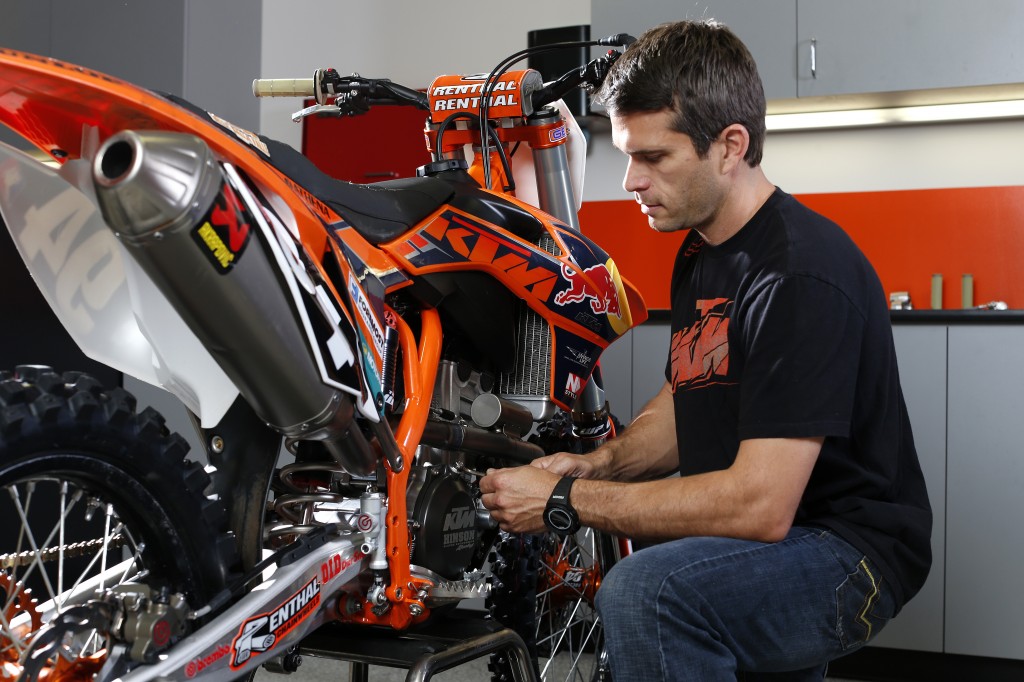 Behind every fast rider…

…is a dedicated mechanic. As Ken Roczen and Marvin Musquin stand on the edge of potential West and East coast 250SX championship success this weekend for the closing race in the AMA Supercross series at Las Vegas we chat briefly to Kelly Lumgair, who has been the support, the spanner-worker, the pit-boarder, the font of advice and the corner man for Roczen in his 2013 pursuit of glory in the USA. Here the South African and former Grand Prix mechanic (winning an MX2 world championship with Tyla Rattray in 2008) chats about his job as part of Red Bull KTM and one of the best and fastest teams in American dirt-bike racing. Apart from one year you’ve been in an Orange shirt for over a decade, right?
KL: It’s been eleven years now and I came to Europe in 2000. I have always been with KTM; whether a factory team or KTM supported outfits. My first season with a factory-backed team was the Dutch Champ set-up in 2004. So it is around nine years as part of the works organisation and I’ve been in the U.S. with KTM for the last four years.

You’re the race mechanic for Ken Roczen, what does that mean?
KL: Basically the day-to-day maintenance of the practice bike and going training with him and then building and maintaining the race bikes. There is obviously a lot of travelling here and we fly into all the races. We deal very closely with Austria in terms of development with the motors and work on the bike. They come up with new ideas and we also have our thoughts here so there is very much an interchange going on. All the observations that we compile together go through a filter process where the best stuff ends up on the production bikes. It is one of the main reasons we go racing.

With 17 SX races, 12 MX and things like the MX of Nations and the Monster Cup it means over 30 weekend of racing…a busy schedule!
KL: It never ends! You start Supercross in the beginning of January and it rolls straight into the outdoor nationals with just one week off between. In September we might get a week or two of fairly quiet down-time but it then starts up quickly with testing for Supercross again. The years go by quickly!

There must be a bit of culture change compared to Grands Prix with the amount of mileage you are covering and all the flying – as opposed to travelling with the truck…
KL: Yeah, there are also a lot of hotels whereas in Europe you will be at the track or staying in the truck. The mechanics tend to socialise a lot more in Europe whereas here you fly in, do the work and then fly out.

Three riders, three mechanics. It means you are quite a tight bunch…
KL: Yeah, we are together all time, whether we are at the workshop, at the test track or waiting in an airport….it is like being married to these guys!

What is Ken like compared to other riders you’ve worked with? Is he quite technical?
KL: He knows what he wants with the bike and when you get him comfortable then he is ‘away’ because he is very talented. The bike can change and react a bit differently for the conditions we find every week but he adjusts himself well to those different tracks. He is not overly strict about his set-up. He can just jump on a bike and go and not even think twice about it.

Is he hard on the bike? Are you having to work a lot?
KL: No, he is the easiest on the bike I have ever worked with. The engines come back and the wear is like it has only done an hour when maybe the reality is fifteen. He is very smooth and technical on the bike. You notice it on the chassis as well. Ken could finish a motocross national and the bike will look like it has hardly been ridden. He is very light on the whole thing.

After all these years is the buzz of the job still the same and is it all tied in to the riders emotions at the races?
KL: The job entails a lot of hours and a lot of hard work, so when the rider gets on the podium or takes a win then it feels great. Even the starts, when he is getting ready, the nerves are there and the blood is pumping. The rush comes from that feeling of the ‘unknown’; you have done all the work and now it is up to the rider to do the rest…that feeling still gets me.