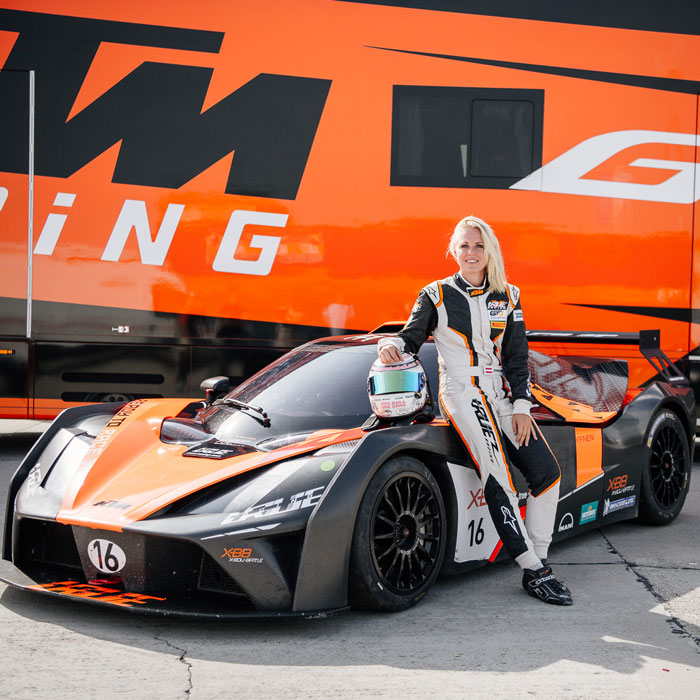 BENDING THE ‘BOW: HOW ONE RACE DRIVER IS PUSHING KTM’S X-BOW PROJECT TO THE MAX

A 29-year-old Austrian is proving that KTM can ripple four sets of rubber compared to two, and with the fresh KTM X-BOW GTX now rolling from pitboxes, the car racing world had better watch out for more fast orange.

When we call Laura Kraihamer she is on the road. It seems somehow appropriate. Even though we’re sure she’s doing our interview in a completely legal manner while on Austrian highways, we still have an image of a very fast commute at the other end of the line. The conversation is relaxed and calm however, much like the racer herself in GT competition.

When Kraihamer is not spending half of a (normal) racing season competing in two series and key Endurance events she’s pushing the marketing campaigns for the X-BOW. There is probably no other KTM employee with such rigorous knowledge of a product; whether in competition, during development or through the refined presentation of a press pack. She has her fingerprints all over the cars.

Like many of her peers Kraihamer was a sponge for adrenaline through karting. When the door to single-seater racing started to close however due to a lack of funding, she looked for alternative means to keep on the asphalt and a chance X-BOW track day opened a new line for her.

“That was in 2012,” she explains, through her exceptional English. “The X-BOW was something to try for fun but I liked the car and found a way to race the X-BOW series; it was really hard the first year but I won it in the second and that brought me closer to KTM. I was working for Audi at the time. However, the more intense the racing became with the X-BOW the better the connection was with KTM. I started working for them in 2016.”

Her sportscar marketing role had the added kick of racing the X-BOW, and more…

You must have seen and felt changes in the X-BOW cars over the years. Have you been closely involved in development?

Yes, I had the honour to be involved in the latest models actually – the GTX and the GT2 CONCEPT. The other factory driver, Reinhard Kofler, developed the very first X-BOW and I was right by his side. He has so much experience and I learned a lot. We gave some feedback and info in the first tests and it was very detailed work. It is incredible how many aspects there are – some you wouldn’t think about at all.

Well, the ABS functionality. There are ten different settings and they are determined by percentages that are very difficult to feel. You need to know the car very well…but if you can define the setting then it can make a huge difference. The way to do that is very hard because it is so detailed. But, it’s really interesting, and satisfying when you get it right so the customer will benefit.

Have you driven many other cars in the last few years? Can you describe the sensation behind the wheel of a X-BOW? Many people will only know about KTM bikes…

I started karting when I was 12, so quite late, until I was 16. Then, as I explained, I finally had that connection with KTM and thanks to winning in my second year it meant I’ve mainly been racing X-BOWs since. Except for 2020. We didn’t have a factory car last year because we were so busy with the new models so I was allowed to drive two TCRs just to get some race time and to have some fun. I also raced the X-BOW in 2020 but it was not a full championship entry.

The feeling? The X-BOW is definitely built for racing! The biggest difference to any other car is probably the weight. The X-BOW GTX now has 530hp and weighs just over 1000kg. There is 650Nm of torque banging on the ground. The power is huge and it is incredibly quick through corners. It feels like a proper race car. I think the older models – the X-BOW R and RR – they felt a bit like huge, open karts, very pure and almost unique in their design. The new GTX and GT2 CONCEPT are a step onwards because you add power-steering, ABS, traction control and aerodynamics. They are race cars through-and-through. The older X-BOWs for the road are very quick because they weigh even less and don’t have the driver aids. You really get what you give when you are behind the wheel.

Having raced in different countries and at different circuits what is the attitude of people in paddocks to the X-BOW? Are they puzzled by a car made by a bike brand?

When we took the X-BOW GT4 internationally people were really surprised by the performance of the car. It won races and championships straight away. The GT4 was a proper race car but the GTX is now on another level. I think people racing in GTX will be very impressed. I’ve not heard one negative comment. I think they are pleasantly surprised by how such a small manufacturer – when it comes to cars of course – can develop a car with such performance in such a small period of time. With the prototype we were leading the Monza 12hr ahead of all the GT3 cars. Besides racing with the GTX I can’t wait for the GT2. The homologation process is currently underway for the full carbon racing car, which weighs just 1,045 kilograms and will have around 600 hp. The output is mind-blowing.

The X-BOW GTX and GT2 CONCEPT seems like a decent statement of intent by KTM. It feels like the X-BOW was initially a fun and eccentric side project over the last ten years but are attitudes inside the company changing towards it now? Is KTM getting more serious?

It’s really developed a lot and we have to be thankful for the all the support we’ve had from the company and the synergies we’ve been able to enjoy with the bike side. Internally I get a lot of messages and interest about the product. As an example, when we launched the new cars I was told we had more organic reach through the KTM social media channels than for any other product. It was crazy! I think many people realise how much effort is going into the X-BOW inside KTM. It’s not just a side project but something we are working really hard for. It’s not easy to be compared to the motorcycles because it involves completely different customer and price groups. We’ll never have the unit sales that the bikes produce. But I feel there is a lot of respect now.

The X-BOW uses an Audi engine. Is it like a 2019 Moto2™ bike where KTM bring the chassis and other parts? What element of the new X-BOW is 100% KTM?

A lot. The design, chassis and aerodynamics is all KTM. Of course, there are a few parts that come through suppliers and the car is so special that we had to adapt everything we have. Hardly anything is ‘standard’. As an example; the steering wheel is totally made to spec by us. We only looking at around 100 models for the range – which is still quite a lot for our current resources – so they are very specialised.

Back on the track: you’re pretty busy in terms of competition…?

I’d say between 28-32 weekends in a normal year. A race week starts with travel on Wednesday and ends with departure on Sunday evening. There are some test weekends and days. You have to be really flexible and very efficient with the day-job! I organise a lot when I’m on the road and I have a team and colleagues that are great for backing me up. There’s not much time for anything else between racing, driving, training and work. I get up at 5.30am to train from 6-7.15 and then drive to work.

What’s the plan for 2021? How many series will you be racing in?

At the moment two. There are some where I’ll drop in for one-two events. You have to co-ordinate well between the championships and watch for the overlaps. Luckily, I don’t decide. It’s a luxury to be told when and where I have to race and to test.

It sounds like a dream job – and you have a relatively new car to race and promote – but how much longer can you continue at that rhythm?

It’s a good question. It takes a lot of energy, I’m not going to lie, and you have to live your life with all the ups-and-downs involved with racing. If it didn’t give me so much then I would have given up a long time ago. As long as it still keeps giving me all that energy back then I will carry on with the five-hour nights! But, honestly, after a year like this I had a taste of what it would be like not to race anymore and I was desperate! Really! I know it is a luxury problem, but I really missed it. I hope for a better 2021. I was not able to really race that much between the ages of 16-22 and I know that feeling, so there is nothing I want to avoid more! It’s just my thing.

Read all about the X-BOW range on KTM.com.

20 Responses to BENDING THE ‘BOW: HOW ONE RACE DRIVER IS PUSHING KTM’S X-BOW PROJECT TO THE MAX