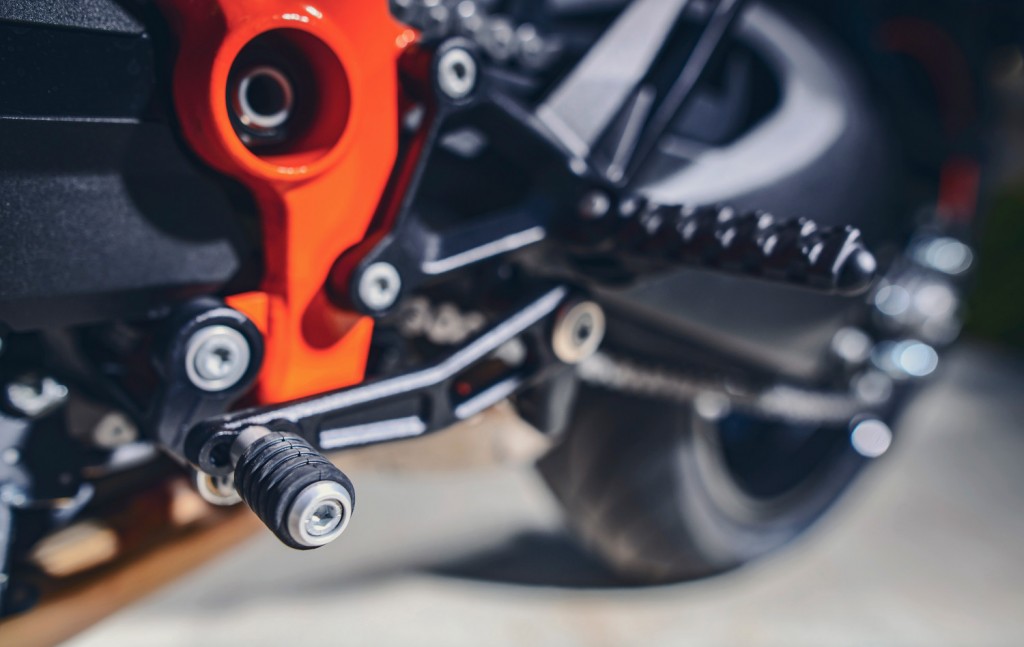 Read that ‘click’. Again. Faster. Now cut it in half. That’s the amount of time KTM’s 1290 SUPER DUKE GT needs to perform one of the slickest gearshifts in the company’s history. Here’s how the wizards at KTM R&D pulled it off. And why you will want this quick shift on your next bike. 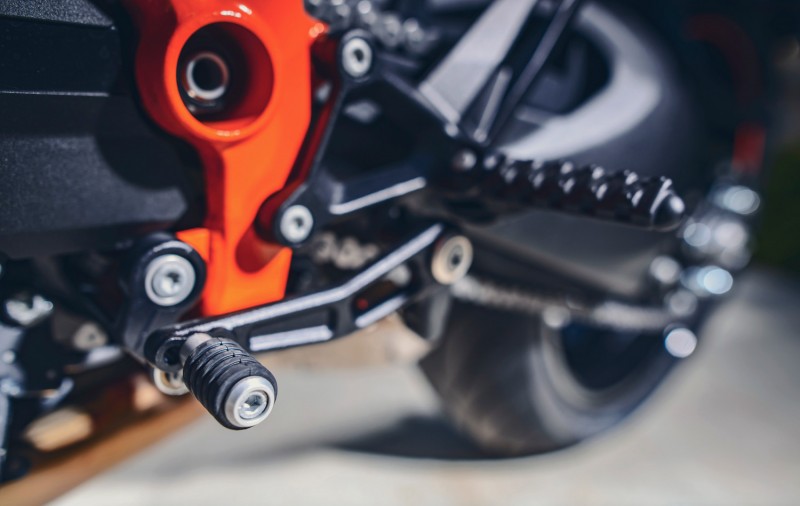 It’s 2016. Why did it take you so long to come up with a quick shift?
Erich Friedl (team leader EMS application): “Easy. Because we didn’t want to sell junk. We started the development process in 2007, during the creation of the RC8, but because of that big twin’s power output our – quite simple – concept kept eating gearboxes. We knew that we needed to come up with an elegant, but rather complex, solution. Which took time. Sure, we could have been bolting on external supplier’s systems for ages, but that would inevitably have led to nasty breakdowns. Which we hate. Instead, we chose to put in the hours, and when I ride the 1290 GT today, I feel like it’s all been worth it. But you’re right, it was about time.”

How does it work?
Erich Friedl: “Sadly, that’s top secret.”

Christian Pichler (R&D EMS application): “No it isn’t. Attached to the shift shaft, there’s a magnet holder and a sensor. It’s all very clean from the outside; no messy wires or ugly black boxes. The integrated sensor recognizes the angle of the shift shaft. If a rider wants to shift up, the sensor will notice a rise in this angle and send a shift request to the ECU, which will then cut ignition and fuel injection. And in pops a fresh gear.” 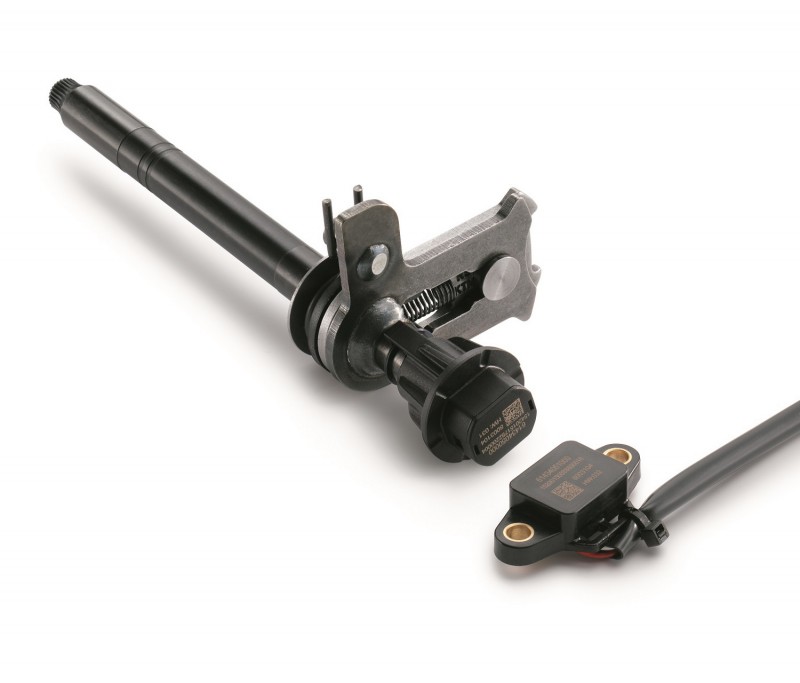 So what’s so special about this particular system?
Erich Friedl [getting excited]: “First of all, it’s the way the sensor detects this so called ‘rider wish’. We tried every possible system with over 20 different riders in all kinds of contexts; from Salzburg city center to the Spielberg circuit. When we mounted a pressure-sensitive sensor, some of the riders loved the shift action, but most weren’t happy at all. We wanted to see smiles all over the place, so we decided to develop one ourselves. An angle-dependent one. Now, it didn’t really matter anymore if the rider had big or small feet or which riding position they preferred. There are no robotics to put the gear in the next position, you just do this the old-fashioned way: with your foot. This triggers the entire sequence of events. And now the activation is as smooth as we envisioned it.”

Christian Pichler: “But that’s only the start. What makes this system so complex, is the smart stuff that happens after the sensor recognizes the rider request. Full throttle and high rpm shifts are easy, but we wanted a quick shift that can handle low load conditions just as well. Say, smooth 50, 60 km/h shifts at half throttle. That’s tricky on a V-twin with 144 Nm of torque, of which 114 Nm is already available at 3,250 rpm. So we added different strategies for every riding situation imaginable, managed by an ignition and fuel cut. The way the system holds back power and releases it again after the shift always depends on the context. So the response to a full throttle and high rpm situation is radically different from when you shift in a 50-zone. The first is lightning fast, the latter buttery smooth.”

Does the lean angle sensor, which also supports traction control and ABS, have any say in this?
Erich Friedl: “Yes, if the bike is on an extreme lean angle, the quick shift will not work because in that situation it could upset the bike. But that’s something only MotoGP riders would notice; for mere mortals (even very fast ones) it will never be an issue. Also, the traction control acts differently when you use the quick shift in a corner. The system knows this through your lean angle, and will ramp up the torque extra smoothly after the shift. Even if you wring the throttle’s neck, the ECU will only give the bike what it can handle in terms of grip. Which will actually make you go faster.” 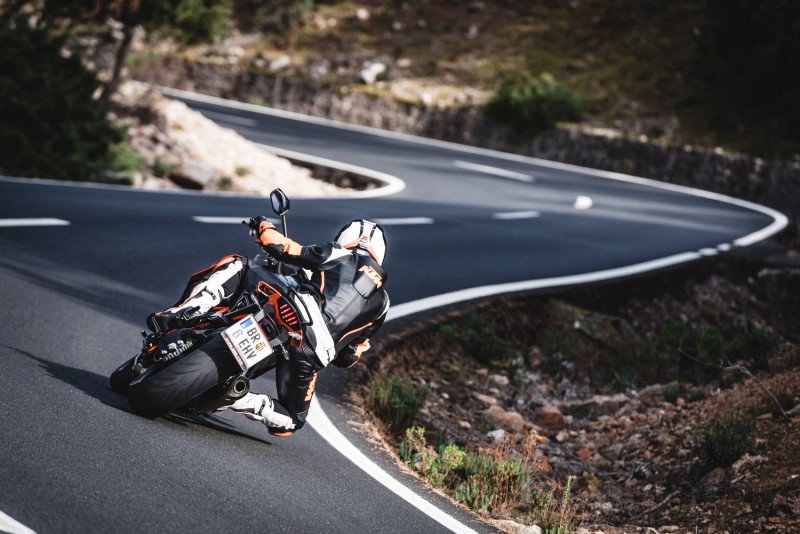 I want one. Can I fit it to my 1290 SUPER DUKE R, which basically has the same engine?
Christian Pichler: “Sadly not, because it’s fully integrated into the gearbox. Besides, did you know that every quick shift we mount is synchronized to its actual gearbox on the production line? It’s like a marriage. The end-of-line responsible has to go through a full sequence of shifts on a rolling road, which harmonizes the soft- to the hardware in order to make sure the shift action is flawless. In addition, should your engine ever need to be disassembled, the dealer can resync your gearbox to the quick shift using his diagnostics tool.”

Erich Friedl: “Maybe wait a little while longer and trade in your bike for a new KTM …”

Does this mean …
Erich Friedl: “I just want to say that our technology is constantly evolving. And that you haven’t seen the last of it. Whatever you do, don’t opt for an aftermarket one. These systems don’t cut the fuel, they just cut the ignition. Unburnt fuel gets into the exhaust system, is stored in the catalytic converter and when the next engine pulse arrives: woosh. It gets scorching hot, ruining your exhaust system in the long run.”

Ok, guys. Thanks for the chat. I guess it’s time to shift.