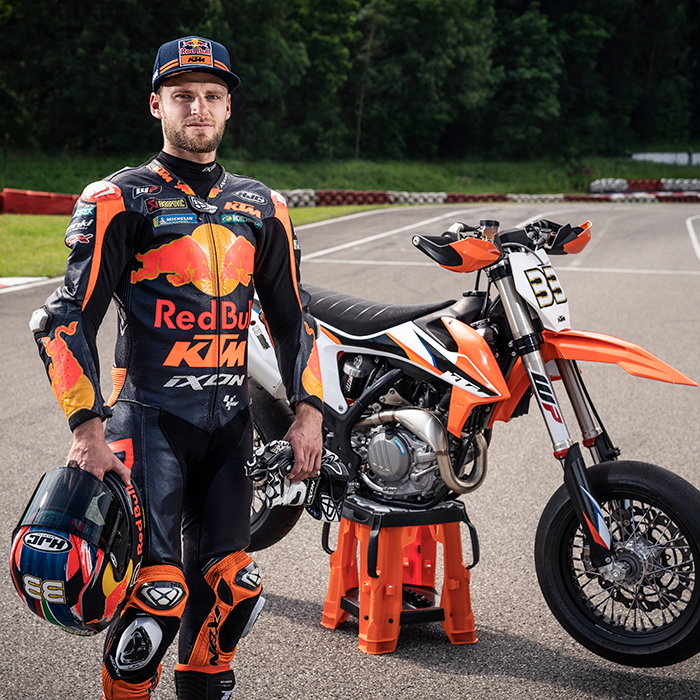 Brad Binder: “It’s the best training tool I’ve ever had”

This summer KTM injected fresh speed into the KTM 450 SMR and warmed the throttle for a new generation to discover the rasping thrill of supermoto, but for the Red Bull KTM MotoGP™ stars the KTM 450 SMR has always been essential. We asked three Grand Prix athletes to explain how and why a different pair of slicks carries such appeal…

Brad Binder couldn’t stop smiling after giving Red Bull KTM Factory Racing their first ever MotoGP win by claiming victory in the Czech Republic this August, only three-and-a-half seasons after the manufacturer first joined the most famous and toughest motorcycle race grid in the world. The South African has a similar grin on his face after learning that KTM have renewed their KTM 450 SMR – the motorcycle Binder embraced to hone the skills that allowed him to create history for the brand.

“I’m super-excited that people will have the chance to have the bike that I’ve used for years in my training,” he says. “In fact, it is the best training tool I’ve ever had. Since the beginning of my career I’ve always ridden supermotard. It’s ideal for [MotoGP] preparation.”

Images of MotoGP riders on a trial course, a motocross loop or a flat track layout are increasingly common as the FIM World Championship now stretches to 20 events (14 this year due to COVID-19), which usually takes up most of the calendar year. They need to keep in trim for ‘animals’ such as the KTM RC16 that propel them to speeds topping 350kmph. Supermoto is another (arguably more) popular option. “If I want to get on a bike between the races then it’s the easiest and best quality choice,” says Pol Espargaró, who this summer gunned the RC16 to KTM’s first MotoGP Pole Position and who now has three trophies in the premier class for the company. “It’s safer than the MX track. I can use the KTM 450 SMR to train my lines and for consistency of lap-times. There are quite a few nice circuits near where I live.”

“For sure it is different to MotoGP but there aren’t many other options for training,” the Spaniard adds. “The SMR is a 450, so it has quite a lot of power at the bottom and you need to control the throttle when you are exiting the corners, so that is similar to MotoGP. Of course, the top speed is slower but what helps is that feeling, the traction and the physical condition that you build.”

Supermoto gained prominence during the 1980s after initially exploding in the United States as a TV sport. It found an avid fanbase in northern Europe. Events such as Mettet in Belgium drew huge crowds. A first FIM World Championship was not created until 2002 and was won by French legend Thierry Van Den Bosch on a KTM.

The 2021 KTM 450 SMR is a track-tooled, race-ready ‘weapon’. A pure track focused incarnation than the larger brother the KTM 690 SMC R. It’s little surprise that names like Binder, Espargaró and others are keenly awaiting delivery of the new spec. The bike contains the latest version of the KTM 450 SX-F engine, pumping out 63hp and weighing just 27 kilos. The complex Keihin Engine Management System regulates the rider’s personal needs for selectable engine maps, launch control and traction control. The five-speed transmission is made by Pankl; the same firm that forge the KTM RC16 components. Everything is squeezed into a special robotic welded chromium molybdenum steel frame that is cast and orientated for maximum centralization and feeling, specific to supermoto and the demands of the discipline.

“It was super-nice this year when I was coming back from my shoulder injury and to have a bit of feedback for the physical condition,” comments Grand Prix of Styria winner and Red Bull KTM Tech3 rider Miguel Oliveira. “Even though it is a different kind of machine it is a very physical ride because it has a lot of torque, and we normally only use them at karting tracks so that makes it even more demanding. Supermoto gives general feedback and feeling for entering the corner but also the exit. It gives you a method to train, and to be fit once you get back to the [MotoGP] race bike.”

“For me supermoto is my base training for MotoGP,” asserts Espargaró. “It’s quite physically demanding so I find it useful for the muscles. Dirtbikes are good but they are not as close to what we are doing in MotoGP, supermoto is a bit closer and it is also so much fun.”

Is this just lip service? Another brief ‘jolly’ for the MotoGP guys to spin some wheels? Apparently not. The riders are posting some impressive hours with their KTM 450 SMRs. “I do it throughout the year,” Binder asserts. “It’s something I do a bit more during the off-season when I cannot get on the MotoGP bike but it’s still a weekly activity. When I’m back at my European base during the season then I’ll plan one or two days a week on the supermoto bike. It’s just a fantastic way to stay sharp but also keep your body in tune.”

“I normally ride once or twice a week,” nods Espargaró.

When it comes to the temptation of turning training laps into something more serious, this is a subject where the MotoGP boys start to differ in their opinion. “I don’t enter any official races, but we have a huge bunch of friends in South Africa, who all raced bikes or Superbikes at some point and we all turned to supermoto,” Binder claims. “Amongst us I’d say there is always a good group of between 8-15 guys that have a blast. It’s good fun and there is nothing better than sliding a supermoto bike: there is such a fine line between being over the edge and fast.”

“No, the risk of competing with guys that are not really professionals is pretty high, so I prefer not to take it,” says Oliveira. “But the Pro racers are super-skilled, to ride in dirt with slick tires is tough to even think about! Hitting a jump, turning in dirt and then getting on asphalt a few corners later is something very sketchy I’d say! But they have the skills to do it.”

“I ride with other people on track – sometimes with friends – and, no matter what, you are always competing! We are in the competition world,” says Espargaró. “I’ve been riding against guys who compete in the world championship and they are super-fast. It can be a challenge to go against them.”

Having accrued enough laps, the MotoGP elite have a full understanding of how the supermoto Pros can find new limits with bikes like the KTM 450 SMR. “I normally do light supermoto – so always on the asphalt – not proper supermoto!” Espargaró admits. “But I see the guys going with these bikes: they are jumping in the dirt with slick tires and it is scary! Maybe I can face them on the asphalt but as soon as it goes into dirt, they smash me! For sure you need to combine both to know how hard supermoto is.”

“The amazing thing is their ability to be fast on the tarmac and the dirt: that’s always one thing I found super-tricky,” agrees Binder. “One minute you are getting ready for a jump, the next you have your knee down a few corners later. It’s really something special and the Pros are the best at what they do.”

The KTM 450 SMR provides a key outlet for the world’s fastest motorcyclists but it’s also a feisty and fabulous toy for a different kind of track experience. Find out what you might have been missing.

3 Responses to Brad Binder: “It’s the best training tool I’ve ever had”