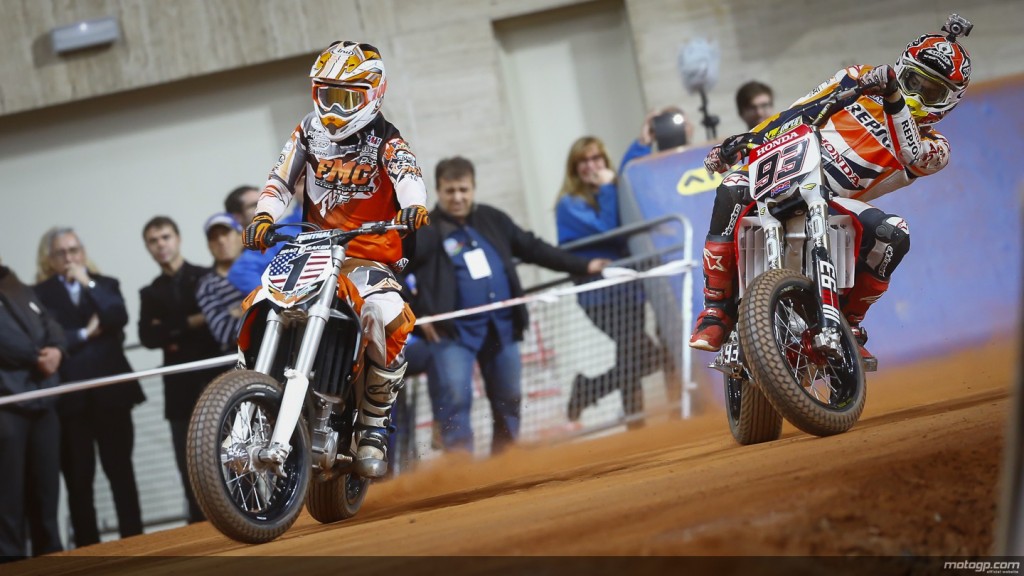 The revival of the dirt track ‘Superprestigio’ was complete last Saturday as all three 2013 MotoGP World Champions – including KTM Moto3 number one Maverick Viñales – battled around the same arena floor that will host rock band Depeche Mode this week and has previous been home to Disney ice shows and Dinosaur theatrics. The Palau Sant Jordi (built for the 1992 Olympics) featured a 200 metre track, ten metres wide with two fifty metre straights. 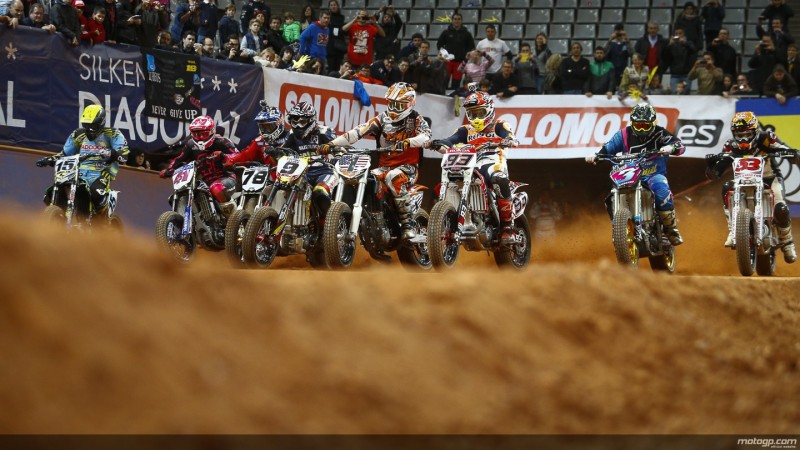 The spirit of the ‘DTX Barcelona’ comes from the traditional end-of-season event when off-road and Grand Prix riders would gather in the 1980s and 90s for some alternative action.

Spain’s road racing elite was out in force but all had to bow down to GNC Champion Brad Baker who took his KTM to victory after a tight and exciting duel with MotoGP supremo Marc Marquez. The 20 year old American is steering orange machinery in short track events in 2014 and this was a perfect warm-up for an intense season back in the USA. “Racing with ‘seventeens’ (wheels) and being over here was a bit different but the bike was flawless,” he said after his triumph. “With FMC and the Dyno centre I had a good exhaust and the suspension was nice. The front end was trying to run away a little bit at times but in that Superfinal I wanted to make a good race for the public with Marc.” 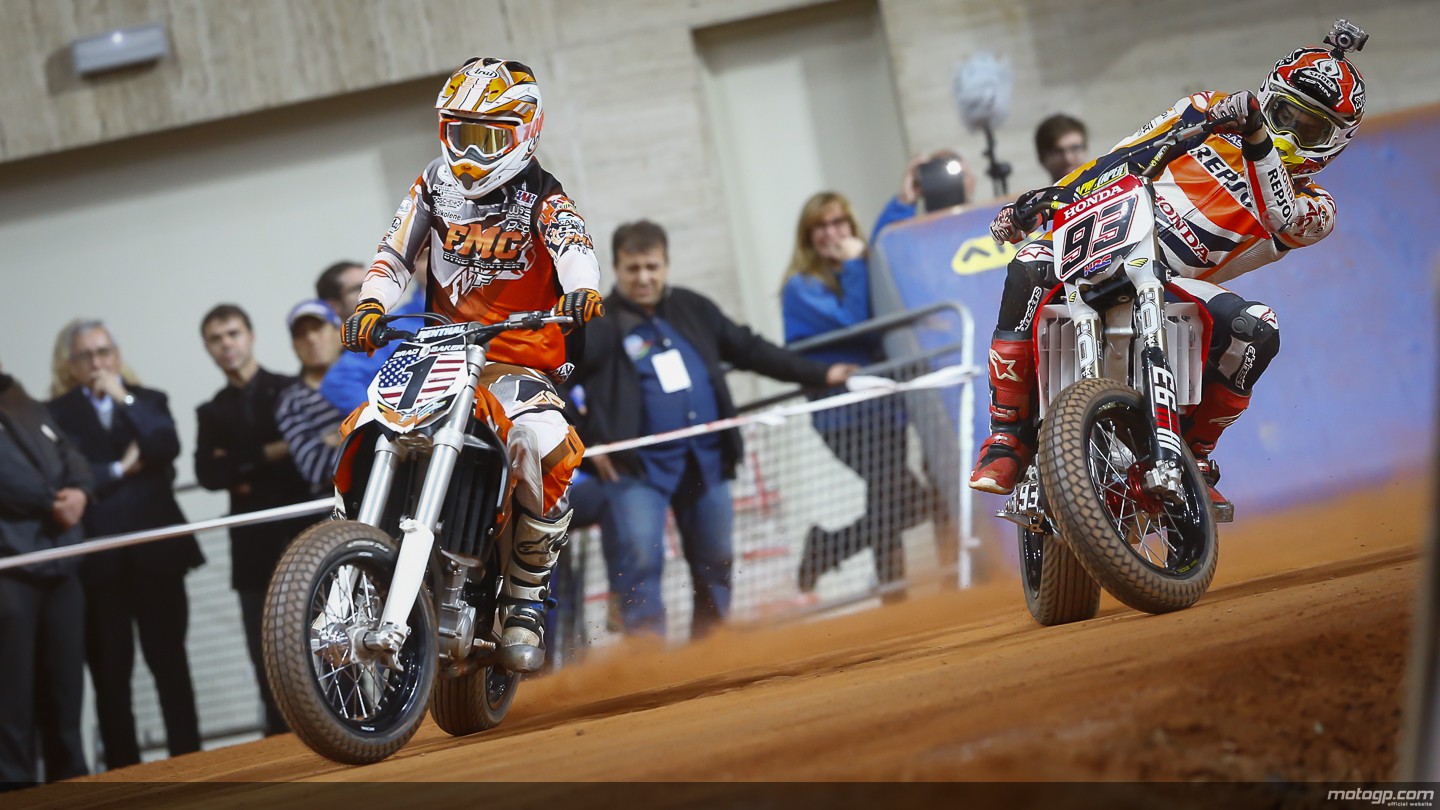 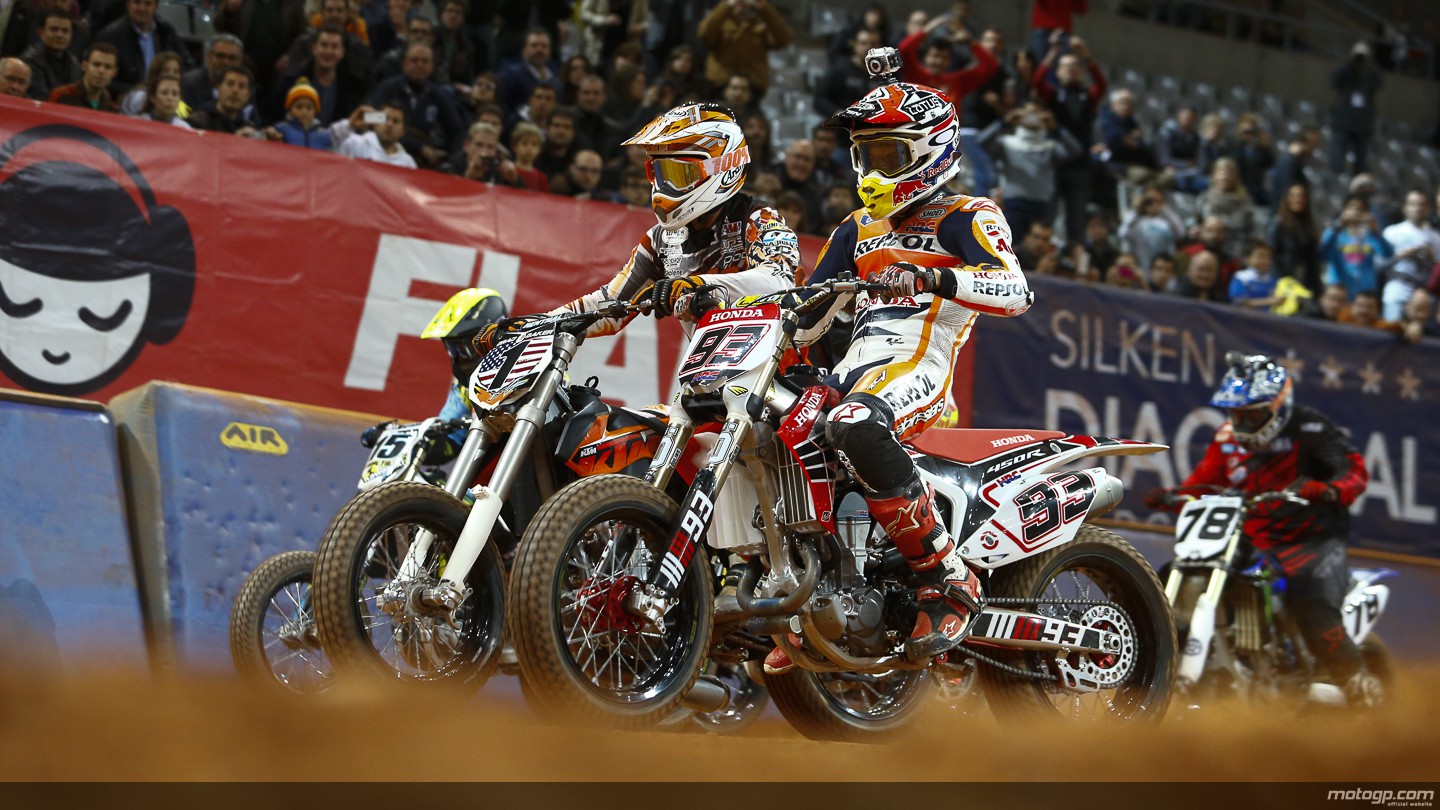 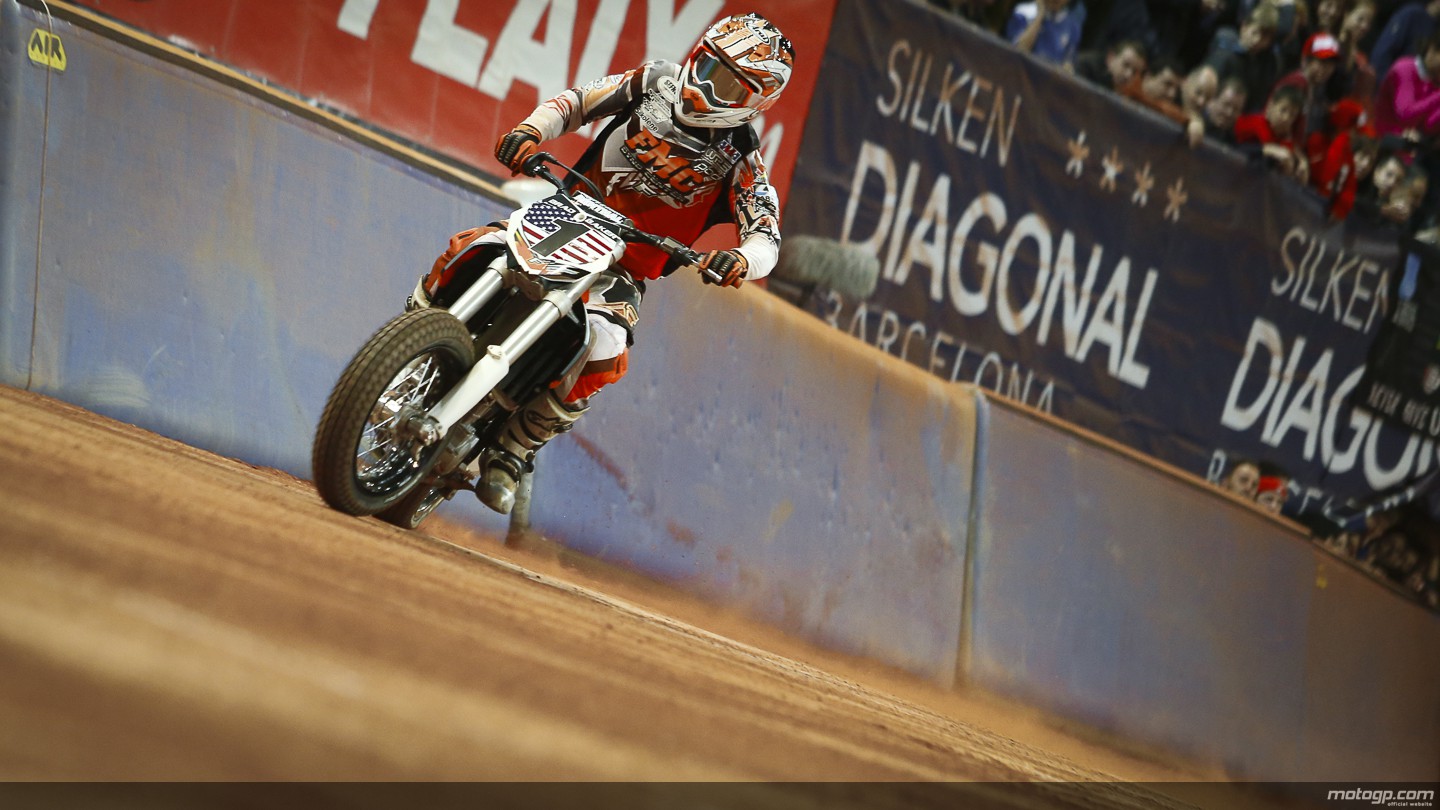 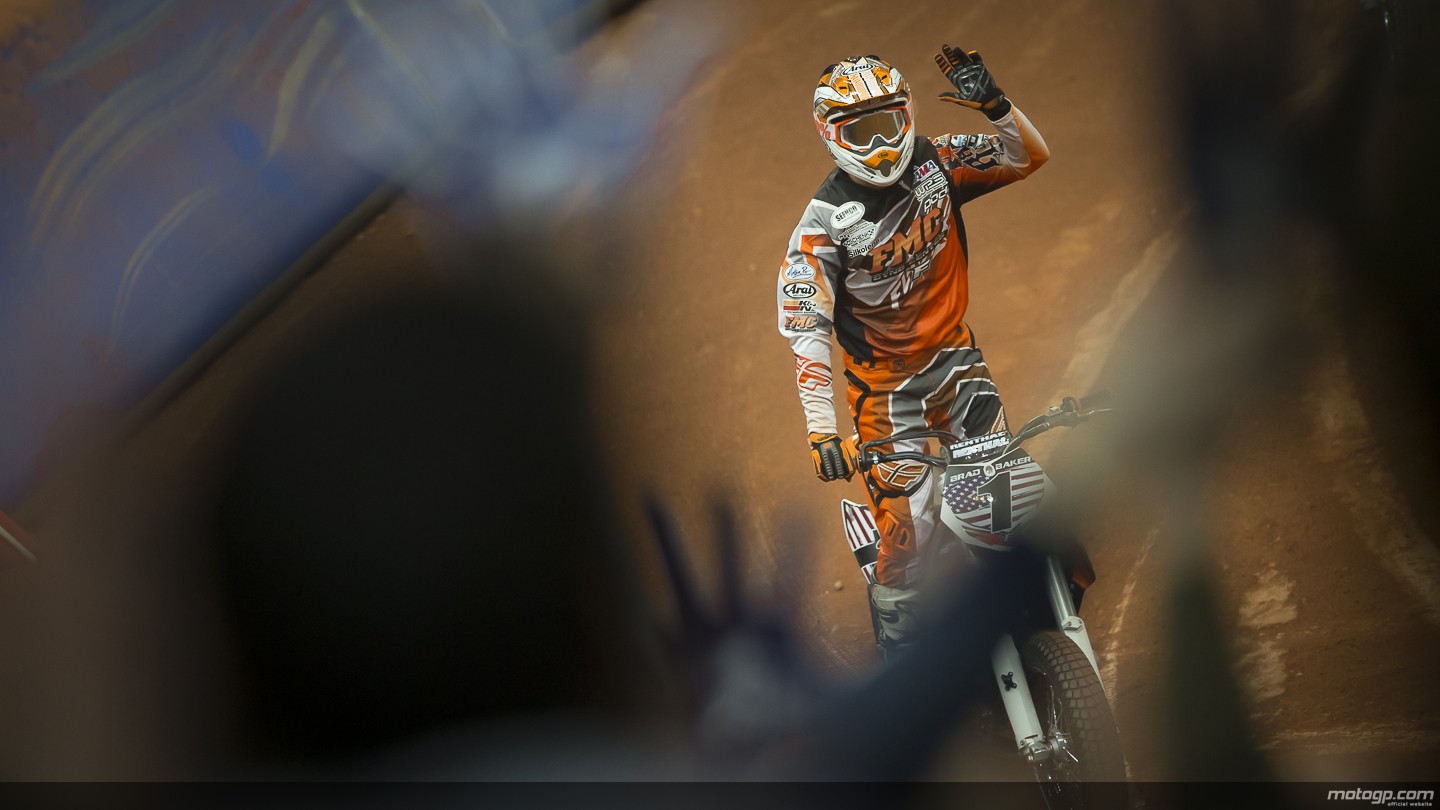 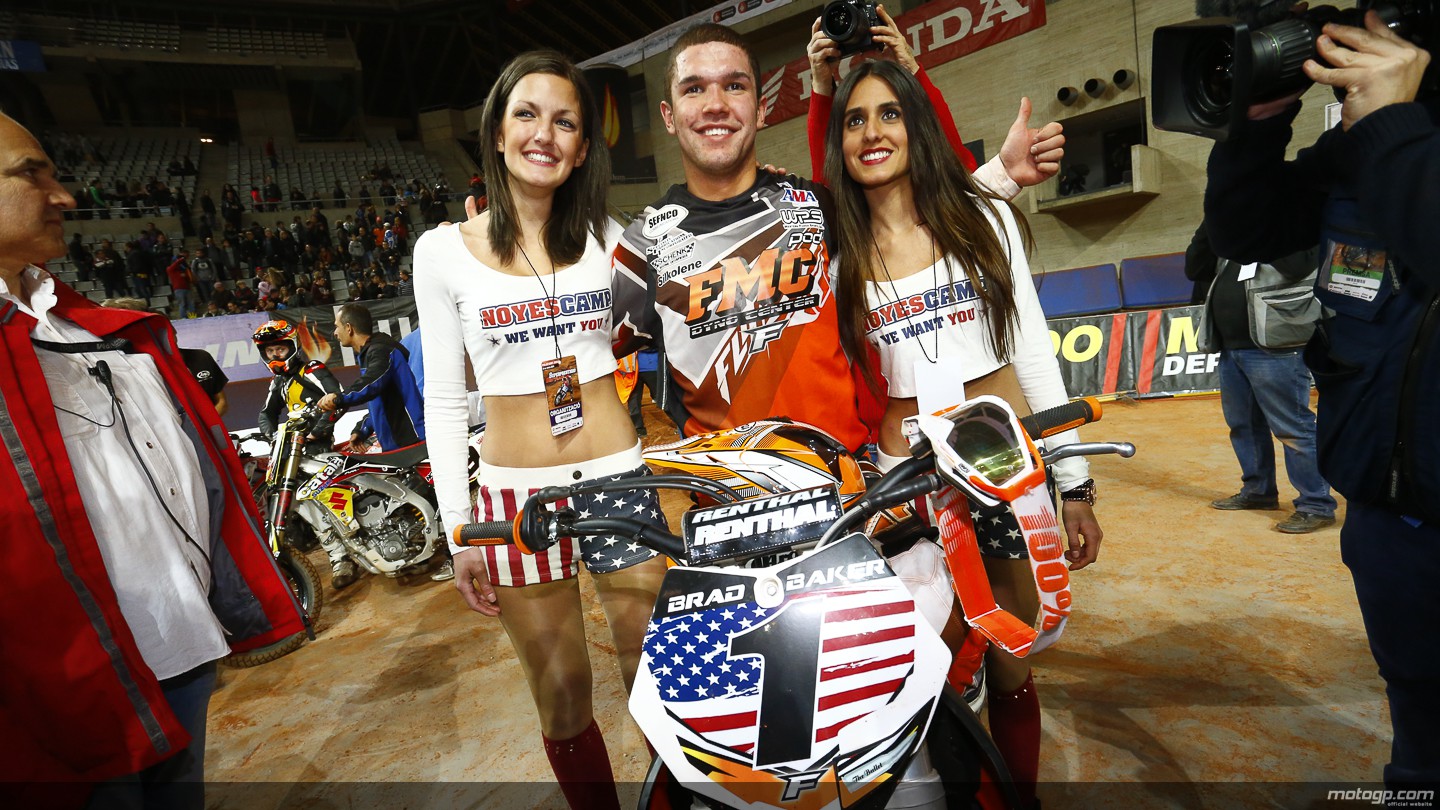 It was not all plain-sailing for ‘The Bullet’ as a hard tussle with Marquez was only decided two laps from the flag when the Spaniard hit the dirt. “It was unfortunate that we got too tight together and he ended up going down but that’s dirt-track and sometimes that happens,” said Baker. “I expected Marc and a lot of other MotoGP riders to be fast. Marc was second to me all day and then we were side-by-side in that Superfinal. I was hoping he might be able to get back up pretty quick (after falling)! I felt pretty bad but then I just wanted to bring it home to show why America has the best flat-track racers!”

Brad Baker: “I was hoping he might be able to get back up pretty quick (after falling)! I felt pretty bad but then I just wanted to bring it home to show why America has the best flat-track racers!”

The success and exposure of the DTX makes for a promising future for the meeting. Barcelona has been home to Supercross, Freestyle, Trial, Extreme Enduro and sometimes combinations of the disciplines. Now dirt track can be added to that list. “It was amazing and I hope it continues for many years. I’m definitely going to come back next year,” added Baker. “ Spain has been great. Everyone has been so kind and friendly and they love motorsports and motorcycle racing especially. A big thanks to KTM, FMC, Marc and everyone who helped make this event happen.” 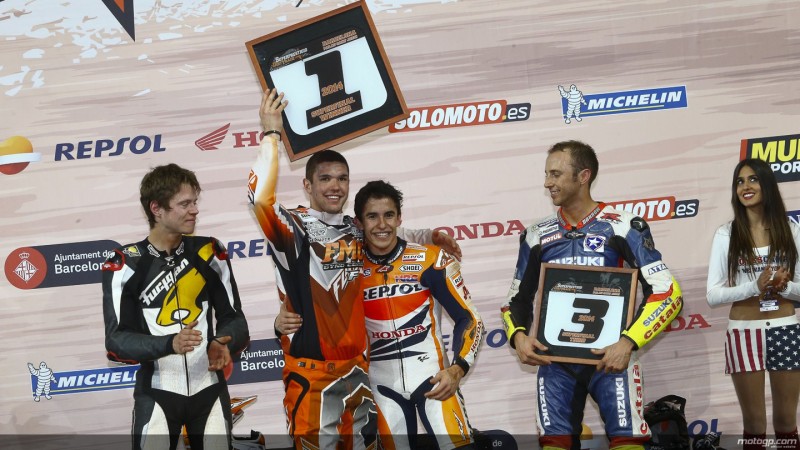