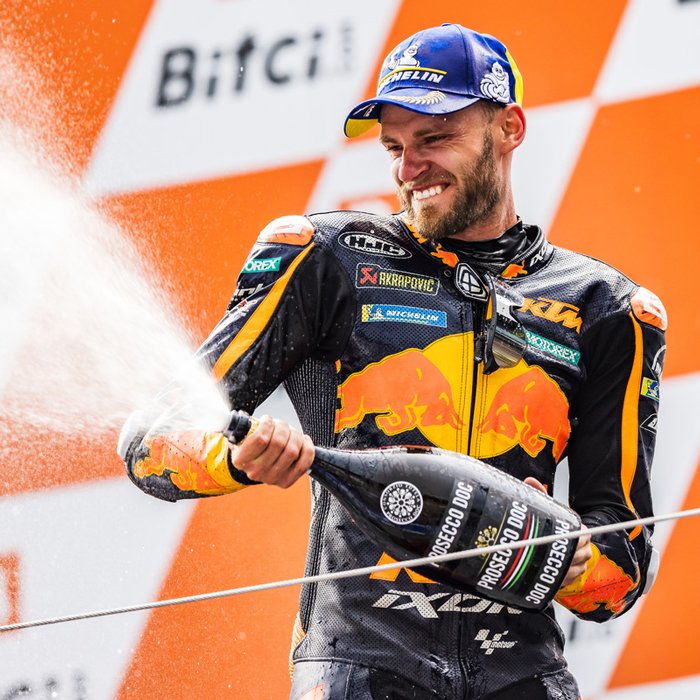 KTM’s home track, the Red Bull Ring in Styria, Austria, recently played host to an incredible double-header for rounds 10 and 11 of the 2021 MotoGP™ Championship. The second of those race weekends saw one of the craziest races in recent memory take place, as the rain began to fall in the closing stages and flag-to-flag tactics came into play. Red Bull KTM Factory Racing’s Brad Binder took a chance by staying out on slicks in the rain, as his competitors pitted for wet tires; the 26-year-old racer went on to carefully steer his KTM RC16 to a sensational victory – which was even more of a spectacle thanks to the return of the biggest fan attendance at a MotoGP™ race since the pandemic began. The victory is KTM’s fifth and Binder’s second in the premier category.

“That was really scary!,” said Binder after the race. “When I saw the rain coming I was trying to work out how many seconds I could lose per lap and when the others went in I decided to take the gamble. I could push hard on the first lap but then the rear tire started to slide as the temperature cooled. Then I lost the carbon brakes!”

“Wow, I think there was someone up there holding me up today because there were a couple of moments when I thought it was over. Here in front of the fans and the home race for KTM and Red Bull I felt like I had to take the gamble. To win today is insane,” concluded Binder.

The final four laps of the 28-lap race were as nail-biting as they get – as Binder explained, the KTM racer ran off track and explained how he lost the use of his brakes at times, but as he calculated the gains he could make by not switching tires, the South African’s tenacity paid off. A victory in front of KTM’s home fans triggered wild celebrations in the Red Bull KTM Factory Racing pitbox. It certainly was a race and weekend to remember. Here at the KTM Blog we celebrate Binder’s victory with 12 images from that special race in Austria.