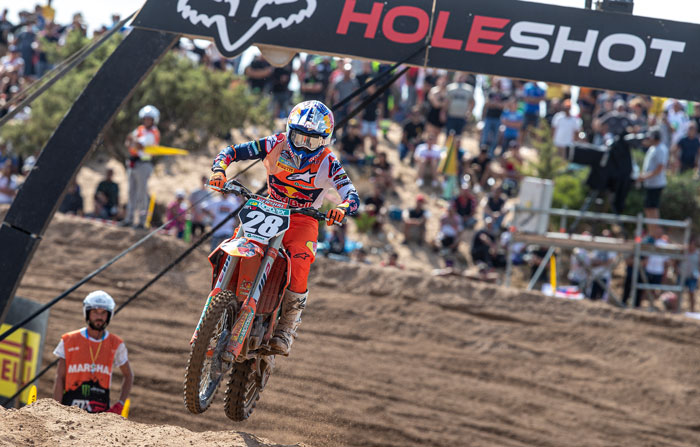 2020 MX2 World Champion Tom Vialle is the best starter in MXGP. Period. The Frenchman accumulated 22 holeshots from the 28 ‘gatedrops’ he’s made in 2021, more than any other racer in any class. We tried to ask for some of his secrets.

Grand Prix starts look noisy, aggressive and scary but there is a finesse in the process. Forty racers line-up alongside each other and they are all hungry for the same thing: the holeshot. Does it come down to timing? To bike power? To concentration? The rider’s weight?

For the last five years MXGP has replaced dirt start gates with a sequence of metal mesh platforms. This has only increased the parity in the MXGP and MX2 classes where bike performance and rider fitness and talent are already so close. The start of a race looks so simple: the gate falls and the riders are full throttle until they have to ease-off into the first corner and find their place inside the pack while avoiding trouble. It has become an increasingly more crucial part of MXGP in recent years due to the high level of the competition and the ‘old school’ circuits where overtaking can be tricky.

In fact, there are a lot of factors that go into the ‘construction’ of a decent motocross start such as the right tire choice, revs (not easy when there are many other noisy bikes in a row, so many racers use limit guide lights on their mudguards for reference), the rider’s positioning and reaction with the clutch, their technique when in motion and out of the gate and into the dirt, the shifting and then corner entry.

The distinction of ‘the holeshot’ has become clearer in Grand Prix thanks to the Fox award and the clear white chalk line that is broken by the front wheel of the lead motorcycle into the opening turn.

21-year-old Tom Vialle has become a master with his Red Bull KTM Factory Racing KTM 250 SX-F in just three years in MX2 Grands Prix. He clocked 8 holeshots as a rookie in 2019 but more than doubled the tally to 21 in his title-winning season (meaning the orange #28 was at the peak of the MX2 field in almost 60% of all GP motos that term). He increased that number to 22 – despite missing two rounds through injury – in 2021 with his next nearest rival on 3.

“When I first came into the team three years ago I knew how important the starts would be for me: even more than usual for any rider,” he smiles. “Why? Because I was coming into MX2 from EMX, and when you are from a lower level and trying to improve then starting near the front and learning from the fastest guys was a big priority. It was one of my goals. In 2019 I was with Jorge [Prado, former teammate] and to start in 2nd place was good because I could see what he was doing. I learned a lot from him and watching other guys like Thomas Kjer Olsen. Towards the end of 2019 – together with Joel [Smets, Red Bull KTM Team Manager] – we finalized a technique that worked really well and I had a lot of holeshots in 2020.”

Are you so good because of your reaction speed? Or is there a lot more to it?

No, my reactions are not that great! When we work with the ball [a manual rapid catching exercise to hone reaction speed] I do OK but I’m not working on making it better. Of course, you need good reactions for a race start but I think what happens when you cross the gate and get into the dirt: this is important. The feeling for the bike, the power and its behavior. When we find a technique that works for us then we don’t tend to change. I like to feel the connection of the bike with the clutch. At the GPs I always go to the test track on Saturdays to test for the start. I check the clutch and the feeling. I believe it makes a difference. You also have to read the gate: sometimes it is very flat as you go out and onto the dirt, sometimes there is a little jump and these differences mean you have to alter your technique. It’s not the case where one technique fits every circuit. I believe the most important factors for the start are the feeling, the focus and the belief in what you are doing.

Saturday seems to be a key part of your preparation then, and we mustn’t forget that the bike is a mechanical item and won’t always feel exactly the same every single time…

Yes, the bike is stripped quite a lot and changes are made every few GPs. I don’t practice starts during the week when I train. I just leave it to Saturday to get the settings right. When you make so many good starts then this gives you confidence. I was talking about this with Jeffrey [Herlings]: if you have a series of starts that don’t go so well then you have the feeling that something is wrong. You don’t have full belief in what you are doing. I’ve had a lot of holeshots in a row in 2021 and it allows me to trust in my process, like I said, the mental side is really important.

You’re one of the smaller guys but do you still watch your weight?

For sure a guy who is 60 kg will get away faster than one who is 80 kg but I don’t take super-special care of my weight. I keep an eye on it – actually, it might be one or two weeks now since I last checked – but I’m not obsessing. I don’t think 2 kg more will affect my starts. Maybe between 5-10 you will start to feel it. It’s also worth saying that you have more grip out of the gate when you are heavier!

Have you had any starts that were so good that you thought ‘where is everyone?’?

In the first GP at Arco di Trentino in 2021 I had a really big one. It was one of my best for a long time. I also had a really good one in Mantova in 2020 and I’ve seen a photograph where I am almost a bike-length ahead on one of the shortest straights of the season.

What’s the emotion that comes with a holeshot? Is it excitement? Or do you relax in the knowledge you have 50% of the job done?

For me the start is one ‘race’ and then after the first corner is another race! I want to ‘win’ the start and after I want to win the moto. I don’t even think about the moto when I’m focusing on the start. I know some guys who like to plan their lines for the second corner but I focus only on the start. That’s my mentality. It depends on the track as well. Arco is one of the most hard-packed tracks and for the MX2 motos there is always a lot of water on the soil because they water it for the race program. For the first two-three laps you cannot really push. You need to go a little easy. After ten minutes you can go faster because the track is drying. If you go full gas from the first corner then you’ll crash. I had that problem a few times in my first season in 2019. I was behind Jorge and slipped out sometimes. I was back in the paddock and saying to Joel “I’m just as fast as Jorge!” but I eventually realized that you have to take it easy for three laps and then start to go, especially when you are in play for a championship.

Are you secretive? A lot of people must be watching you and trying to copy…

Everything you do is out there. Everybody can watch or film you and analyze. But if you don’t really explain it then it might be difficult to break it down!

What’s the biggest piece of advice you would give to someone who is struggling with starts or badly needs an improvement?

The mental part is important. When you go to the gate then you need to believe in yourself and believe you are stronger than those to the right and left of you. You must think you are better. You should also study the best in GPs: when you are a hobby rider or trying to learn its very useful to watch the ones that are the best. Get a good feeling for the clutch and work out the grip when you exit the gate. Get your feet on the pegs as quickly as possible so the tire has maximum traction. After this then practice!

“You have a better ‘life’ when you start in the top five compared to the top fifteen. Also, a lot can happen when you are back there. There is a lot of risk.”