Collecting Moments #2: The Search for the Perfect Motorcycle

Getting your first bike is like a dream come true. I can still recall the moment when I laid eyes on my own Enduro for the very first time: A 2015 KTM 350 EXC-F. I loaded it onto the trailer and proudly drove it home.

A lot of people ask me why exactly I chose a KTM 350 EXC-F. To be honest I’ve always liked 4-stroke motorcycles, but the KTM 450 EXC-F was simply too powerful for me. And with the KTM 250 EXC-F, I always got the feeling that I needed to drive at speed for it to function properly. The KTM 350 EXC-F was therefore the perfect choice. A perfect combination of refined handling and more than enough power in the lower torque range made it the best solution at the time. Although looking back from today’s perspective, things don’t look quite as clear cut as all that.

I didn’t actually have my own garage back then, so I had to ask my brother if he could make some room at his place. He interpreted some room as very little room, and I was given a corner measuring a generous 1 x 2 meters – I could just about fit my KTM there, but nothing else besides! I have to look back on this and laugh, and to be fair, I don’t think I’d give anyone more space in my garage today. I actually have my own workshop now – a hallowed place where I spend more time than in my kitchen or living room. My grandma kindly let me use this space on one condition: I had to clear it out myself. After many hours of sorting, planning, and throwing things in the trash, I had finally created enough space for a proper workbench, which I built from old chests of drawers and a kitchen worktop. A READY TO RACE mat, a lift stand for the bike, and stage one was complete. I am extremely happy with my little kingdom to this day!

I had the KTM 350 EXC-F for almost a year. It is on this bike that I have experienced my first Enduro races, primarily in the Cross-Country segment. During a training session with my friend Petra Bernhard, I tested her 2016 KTM 250 EXC-F and instantly felt at ease. Petra is actually so much more than my girlfriend. She helped me to lay the foundations of my career and without her I wouldn’t be where I am today: I learned my first tips and tricks from her and I often think back to the advice she gave me during training sessions. 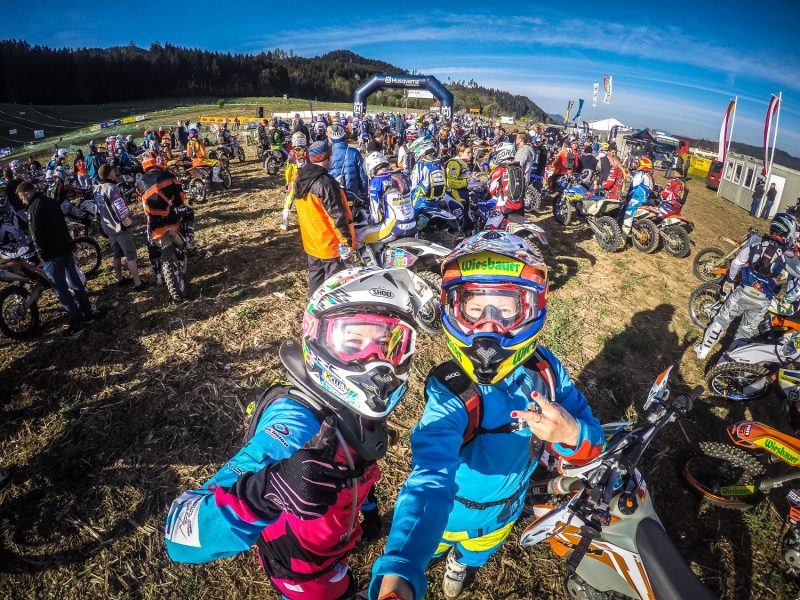 So why did I feel so much better about the KTM 250 EXC-F this time? I think my riding style had changed over the year, as I dared to ride in the upper ranges more often. Inspired by the phenomenal feeling when riding Petzi’s bike, I finally decided to sell my KTM 350 EXC-F and bought a brand-new KTM 250 EXC-F SIX DAYS bike in autumn 2015. I got the bike from Schruf, my KTM dealer in Vienna, and I was shaking out of sheer anticipation when it was being loaded onto the bus. I’ve learned a lot from riding the KTM 250 EXC-F: I am more confident and I have taken part in my first Enduro tours on challenging terrain. My first race on foreign soil came in May 2016. Despite being in only my third Enduro season, I was already facing my first Enduro Rally. Fortunately, I discovered during the preparations that only registered motorcycles could take part in the race. At this point I didn’t have a Category A license, meaning that my KTM bike wasn’t registered either. So, I asked a friend for help: Florian Salbrechter offered me his two motorcycles. I then had the agonizing choice between the KTM 250 EXC or KTM 300 EXC – both of which are 2-stroke bikes! I must admit, at first I really wasn’t sure. Two-stroke? Can I even manage that? Isn’t that too powerful for me? To cut a long story short, getting on a 2-stroke motorcycle was the best decision I made in my early offroad career. 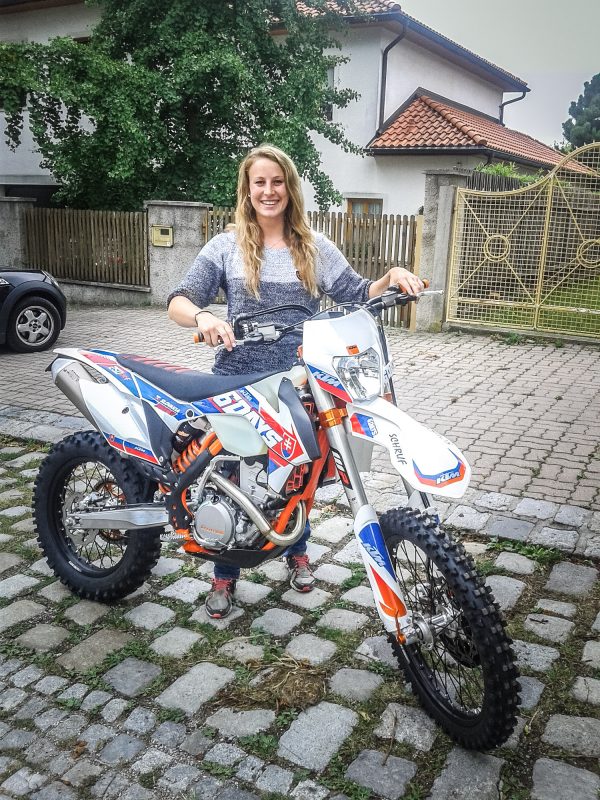 Sometimes I can’t even believe I’m actually saying that, as I’d only ever ridden 4-stroke bikes up until this point. Then came the first few kilometers on the 2016 KTM 300 EXC and my Damascene moment. I fell totally in love with it, and after the first race day of the rally in Croatia I knew what I was going to do when I got back home. I was going to replace my 4-stroke motorcycle with a 2-stroke model! After the race, I conducted a sort of trial run and tested both the KTM 250 EXC and the KTM 300 EXC to be absolutely sure which bike was right for me. Still to this day I can’t explain why, but I felt slightly more at ease on the KTM 300 EXC, so in the end I chose this bike. I have achieved my first holeshot, my first victory and my first Cross-Country Championship title on the KTM 300 EXC – “The Rocket” (as I like to call it) and I make a great team.

Get to know more about Larissa on the KTM BLOG – Collecting Moments #1: Passion for motorcycles – or check out her website!

60 Responses to Collecting Moments #2: The Search for the Perfect Motorcycle