Collecting Moments #6: The Road to Recovery

Dialing things down a notch. But only in preparation for new adventures … That’s exactly what I’ve been doing for the past few months. My injury marked the beginning of a whole new chapter in my life. My main focus was no longer new adventures, but rather something much simpler, and self-explanatory: recovering!

If you’ve never had an injury or been forced to take a break before, it’s a difficult situation to come to terms with. You’re faced with a whole range of new physical challenges. Day-to-day situations like putting your pants on by yourself, fetching a glass of water from the kitchen, or going up and down stairs become real challenges. But it was not only difficult physically; it was also a huge challenge psychologically. I had never felt so restricted and helpless. It took me a while to learn how to face this situation head on and make the best of it. In a way, I was fighting against myself.

In the months after my injury, I of course had many tests and sessions at the physiotherapist. I was overwhelmed with advice, information, and exercises to do at home. I listened to many different opinions about the state of my knee and remained convinced that it was best not to have surgery. There were many different reactions to my decision among my friends and family. Some people could understand why, some people couldn’t. Opinions differ greatly when it comes to knee injuries.

My final decision was inspired by a member of my family. My grandfather, 75 years old, is an active participant in the senior category of the FIS Ski World Cup and always finishes in the top three. He tore both of his cruciate ligaments and nevertheless has a level of fitness other people his age can only dream of. His resilience and his successful career as a pensioner athlete inspired and, most of all, motivated me. He gave me the courage to recover my strength without an operation and a risky procedure on my knee! 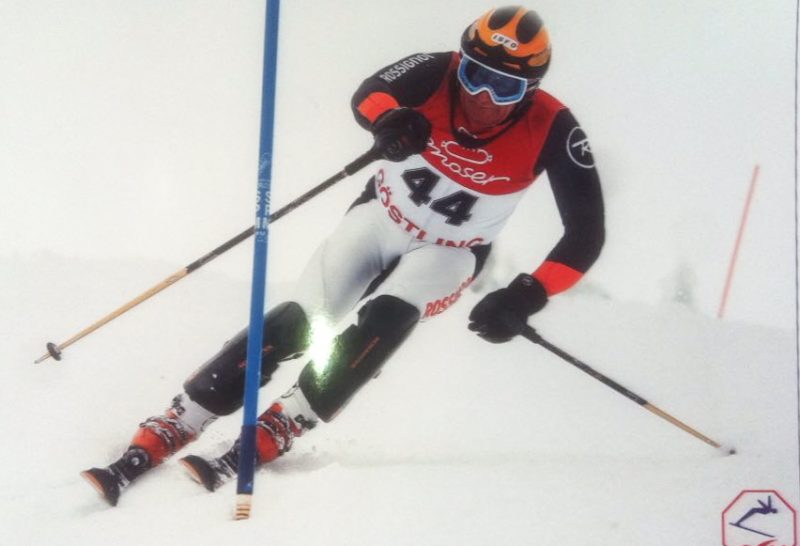 The collateral ligament forced me to rest completely for a few weeks, but is now almost fully healed. The heavy bone bruising improved slowly but surely, the pain gradually becoming more bearable. I was very cautious to begin with at my physiotherapy sessions. It was more difficult than I thought to be able to put weight on the knee and to build up my confidence again. After the fall, my bones felt as if my upper leg was going to the right, my lower leg to the left. The pain was so terrible that still gives me goosebumps when I think about it.

Learning something new is difficult, but relearning something you already knew is even harder. How difficult can it be to just stand on your leg? It’s hard to imagine, but it took a lot of effort! When I finally managed it after a few attempts, I cried from happiness and relief. The knee held!

To begin with I found it difficult to get used to my new “sports equipment”: crutches. I found them very impractical, but had to begrudgingly admit that I was even more helpless without them. I had to get used them, whether I liked it or not. I found out quite quickly, however, that crutches in fact really are a kind of sports equipment. Anybody who has used crutches will know how demanding they can be. It’s very strenuous for your shoulders and upper arms, and trying to move a bit faster will definitely make you sweat. I had discovered a new kind of sport, or at least a new and different way to keep my body active.

I “walked” for miles through the forest near my home, up and down hills, over roots and stones. It felt so liberating to be outside again. Nature gave me strength and made my recovery period more bearable. One advantage of compulsory breaks is that you have time to finish the things you’ve been putting off. The 2017 season was very turbulent, so I enjoyed having time for my workshop and my bike. Taking everything apart, changing parts, servicing the bike, and putting everything back together again. It’s great to know that my rocket is ready and waiting for me as soon as I’m fit and READY TO RACE again!

All things considered, things are going much better for me now. I now understand the saying “what doesn’t kill you makes you stronger!” which never seemed particularly logical to me before. All in all, I have gained a lot from these very difficult weeks and months, both as a person, and from a sporting perspective. Never before have I been so desperate to get back on my KTM 300 EXC, press the E-starter, and go!

Get to know more about Larissa on the KTM BLOG – Collecting Moments #5: An enforced brake – or check out her website!

106 Responses to Collecting Moments #6: The Road to Recovery