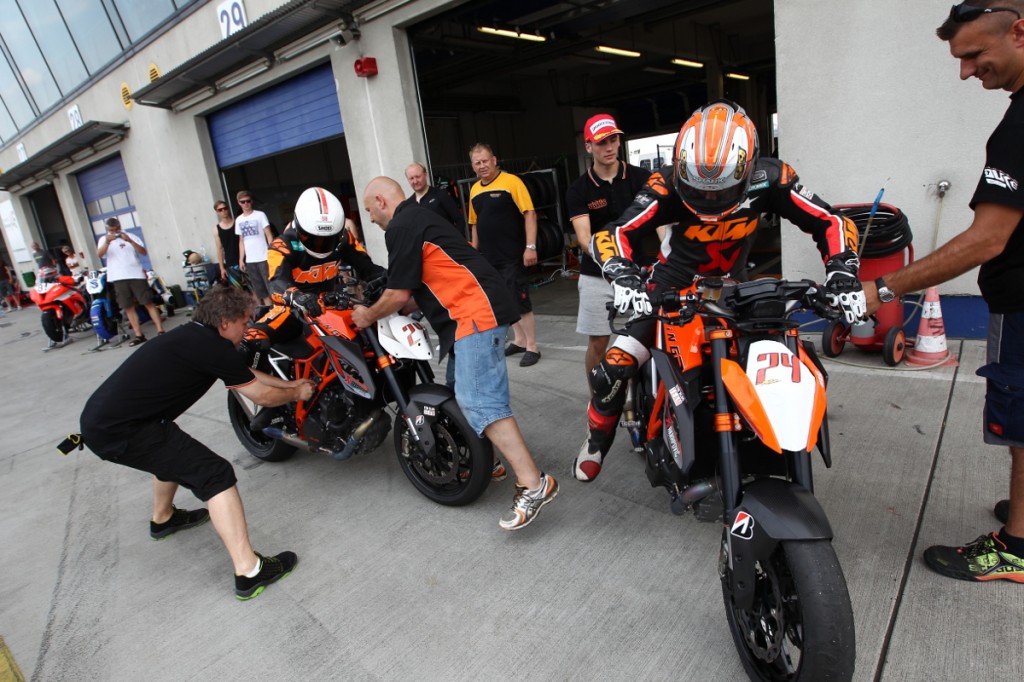 Column: A damned hot pursuit – the KTM Beast Boys at the 6-H race in Oschersleben

After a successful start at a 7 hours race at the end of April, the KTM Beast Boys made another race appearance with their KTM 1290 SUPER DUKE Rs at a 6 hours event in Oschersleben.

Damn, damn. ‘Cleaver 5’ (aka Oliver) sits on the pit wall staring at the timing monitor, stopwatch in-hand. The strategic mastermind has been roasting in the sun for hours, passing information to the three Beast Boys via the display board and directing the pit crew. Now in the closing stages, he’s jigging excitedly back and forth, checking, counting and calculating every lap. It’s crystal clear that it’s going to be pretty damn close at the finish.

Out on the track, “Rocket” (also aka Oliver) is riding a wild pursuit on his 1290 SUPER DUKE R, notching up one best time after another and catching up lap by lap. The atmosphere is crackling with tension. It’s all or nothing now. The third and final honourable place on the podium is up for grabs in the top class. The Beast Boys are battling against the Outdoor-Unlimited-Team, consisting of two four-cylinder BMWs and a green cruise missile. 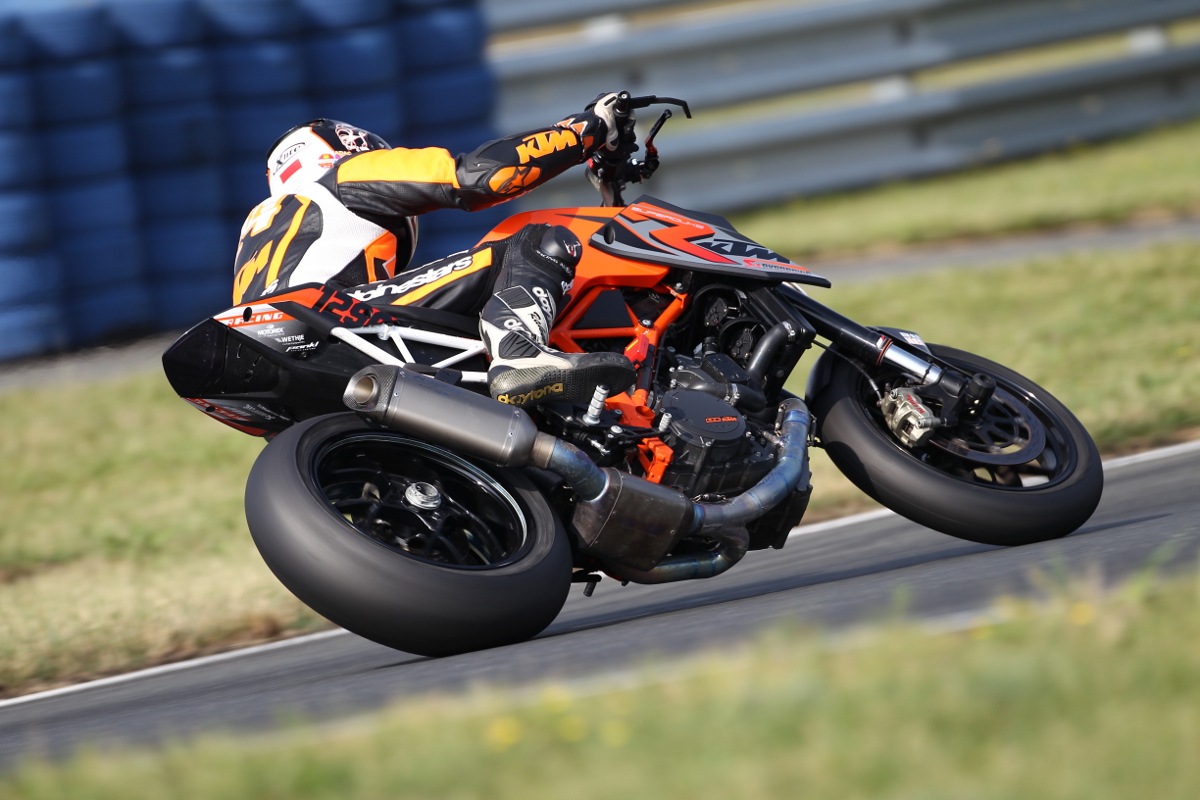 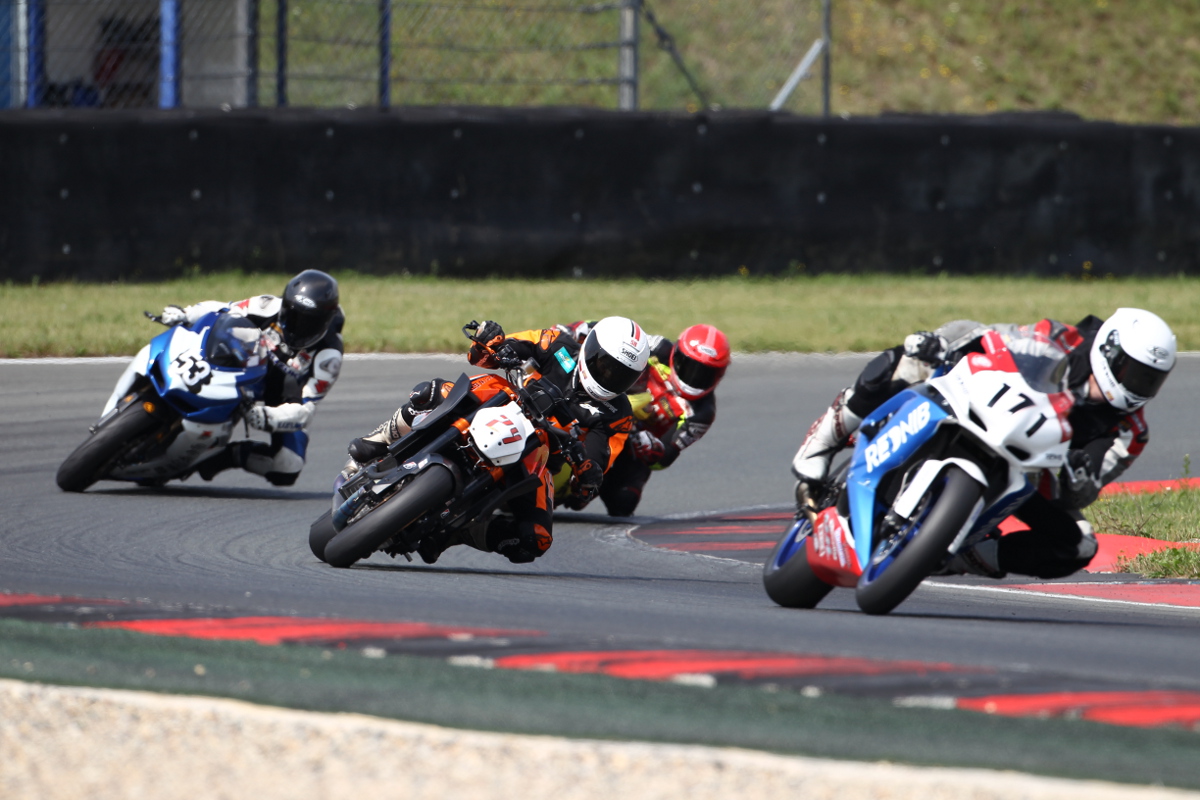 It’s incredible how dramatically everything has come to a head. Just beforehand, the KTM trio still had 3rd place in the top class securely in the bag and the Outdoor guys were one lap behind, because Toni Heiler (Germany’s longest-serving and still extremely fast racer) had made an early exit – out with a finger injury. One unscheduled pit-stop from Jeremy McWilliams and two pace-car phases later (timed decidedly unfortunately from the orange perspective), the remaining Outdoor duo Stephan Herter/Thomas Jansen are suddenly one lap ahead. Sound the alarm! The mastermind reacts immediately and dispatches the Rocket into the final stint with the task of out-and-out pursuit, flat-out all the way.

‘Cleaver 5’, the active Duke-Battler, cheers him on, waving his fist in the air every time they pass, rattling the safety barrier, tearing at his hair, rolling his eyes imploringly to the heavens. The roaring orange with start number 24 gets ever closer to the pursued green projectile, which fights back bravely. With two to four seconds a lap being nipped away, the lead shrinks and shrinks …, but it’s not enough. When the chequered flag drops, a one lap deficit has been reduced to a mere 15 seconds. Another two or three, maybe four laps and he would have been caught. The last honourable place on the podium is not to be. Damn! 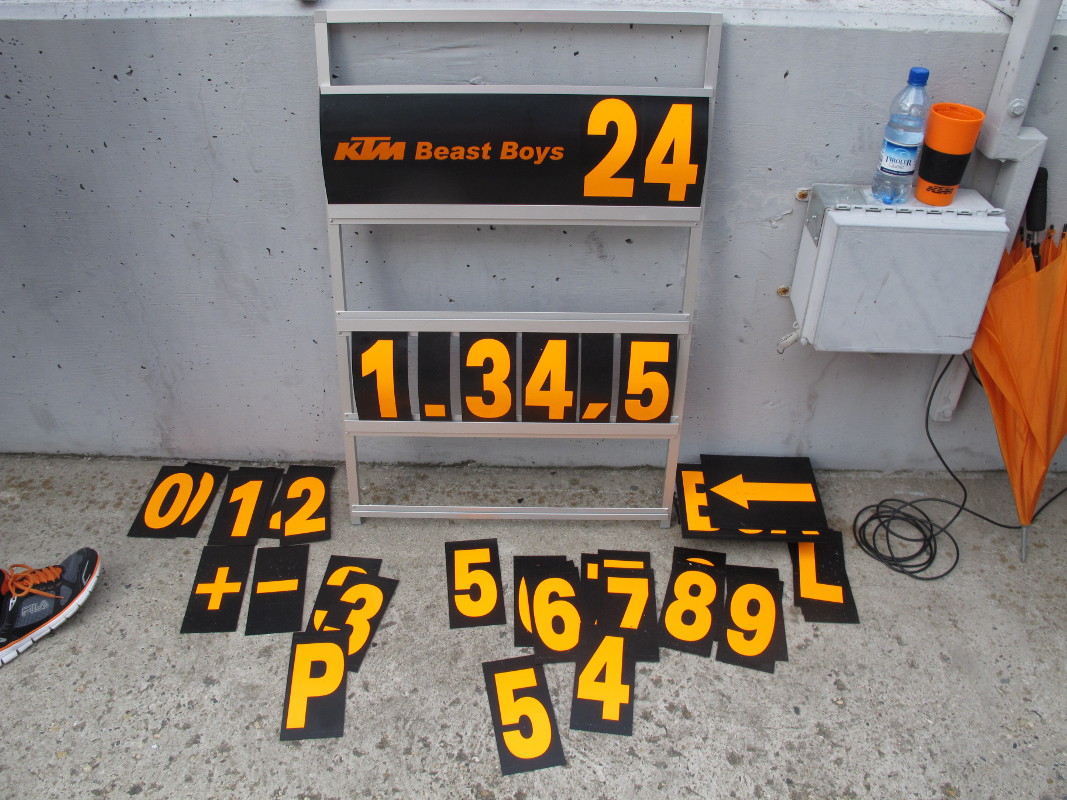 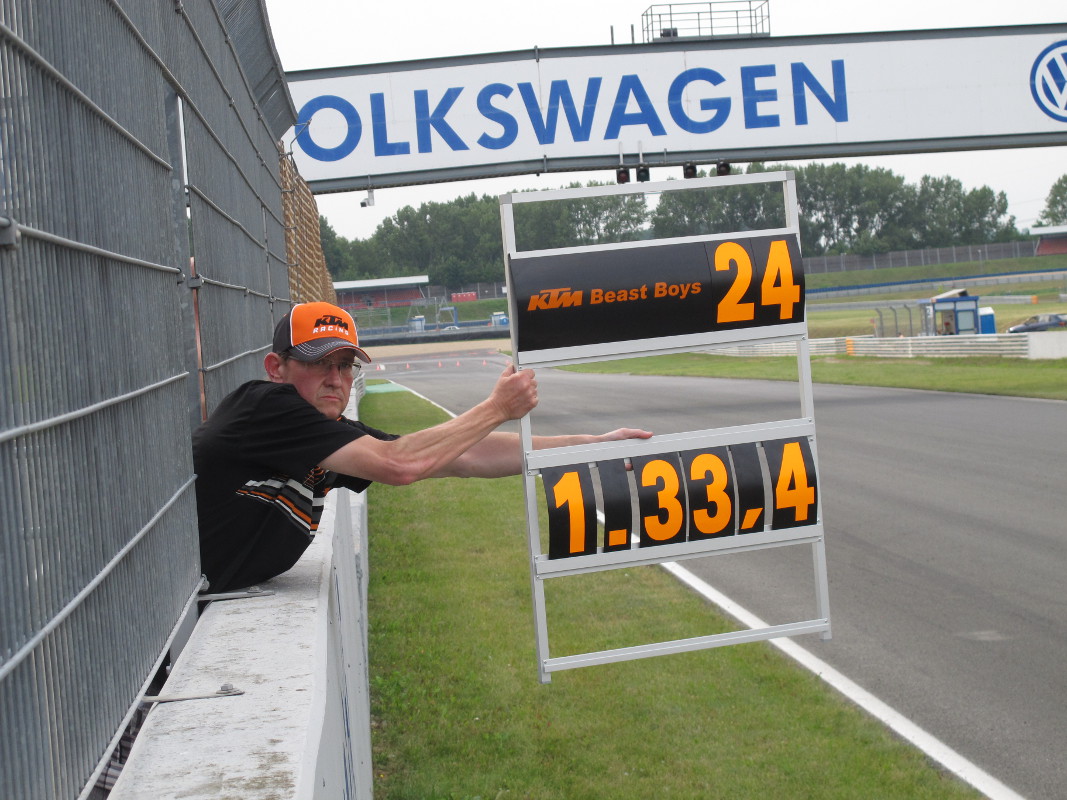 Of course, everything was OK in the end. An awesome race for the DLC, the German Long-distance Cup. Six hours at full throttle. Fighting until the very last round. Riding through highs and lows. Sweeping problems out of the way. Having loads of fun. Giving one’s best, bravely and committedly. Nothing more could have been done. One or two beers later and the cup for 4th place in class (5th overall) is also a decent trophy that’s gladly accepted. 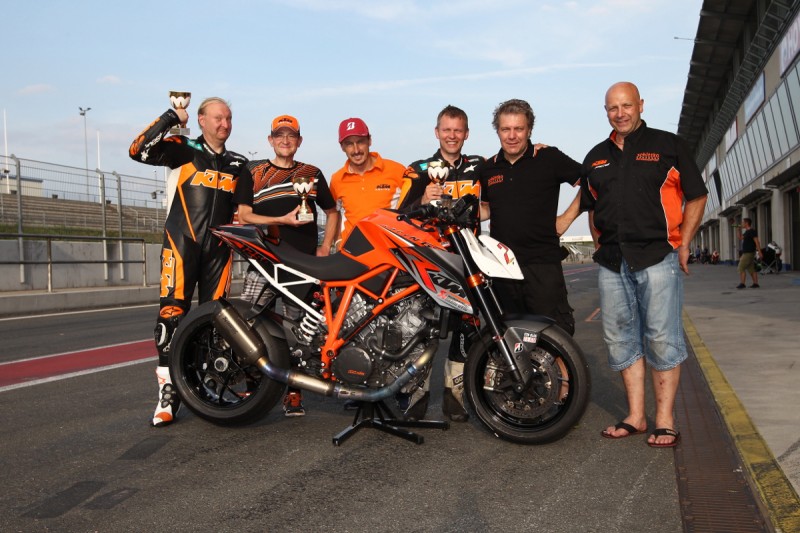 Like most DLC competitors, the KTM Beast Boys Team with Thomas “Kutti” Kuttruf, Oliver “Rocket” Schmidt and Jeremy McWilliams entered the fray with three bikes. Then, at the pit-stops, it was just a matter of swapping over the timing transponder. The alternative is to enter a bike in the One-Bike class. This is then refuelled classically in endurance style from cans in the pits when it stops to change riders. Wheels can also be replaced as required. 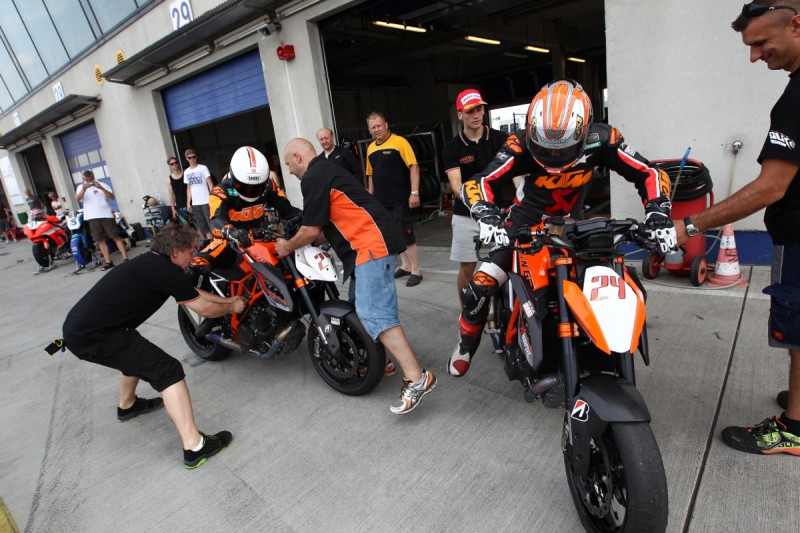 When three race-ready SUPER DUKE Rs are standing alongside each other on the orange carpet in the pits, it simply looks amazing. However, the wonderful appearance often glosses over the odd organisational hurdle or two. For the Oschersleben event on Saturday, Kutti and Rocket only rolled up from Mattighofen, with the three 1290s in a transporter, late on Friday evening. That’s simply how it is sometimes: The bikes had been lent out to the press for test purposes and for photo-shoots somewhere at the end of the world for the next PowerParts catalogue. 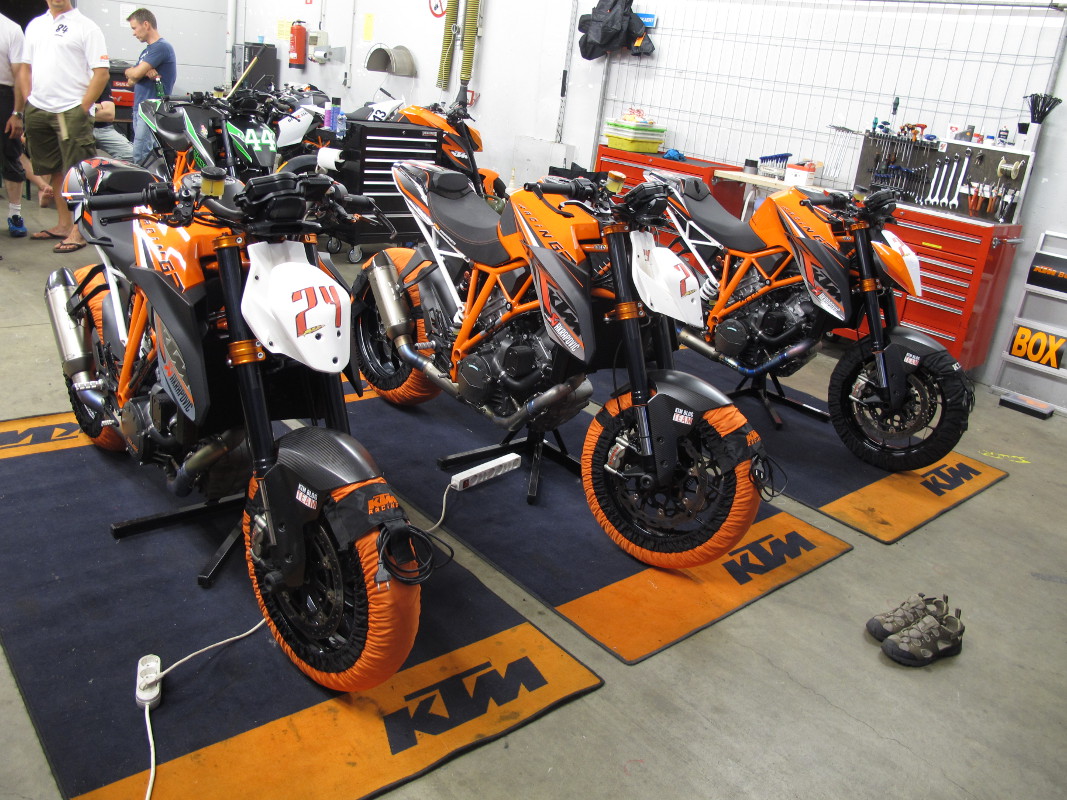 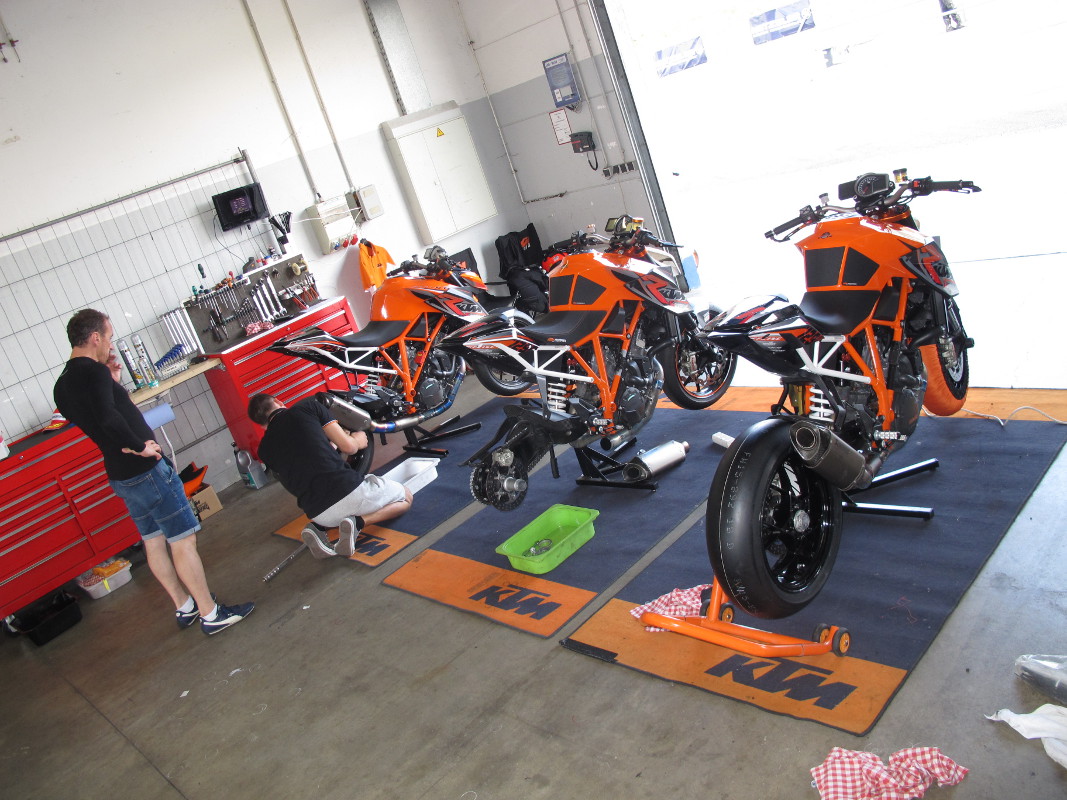 Returned just in time for the long journey, the bikes, which had been converted back to standard spec, still had several details that needed to be sorted out. Handlebars and levers were no longer suitable. Protective radiator grilles were taken off. On Jeremy’s bike the padding on the sports seat had been gnawed at all around (mysterious!) and the mountings on the tank for the standard seat were missing. And so on and so forth.

And apart from all that: What type of oil is in there now? Why is the setup is all wrong? Why have the transponder brackets been removed? Who’s going to ride at the start? How come all the Bridgestone stickers have been removed? Have we got any new ones? What, they’re in Mattighofen? Well, the tyre gods who generously support the Beast Boys with rubber are going to be highly amused. Damn! Damn! 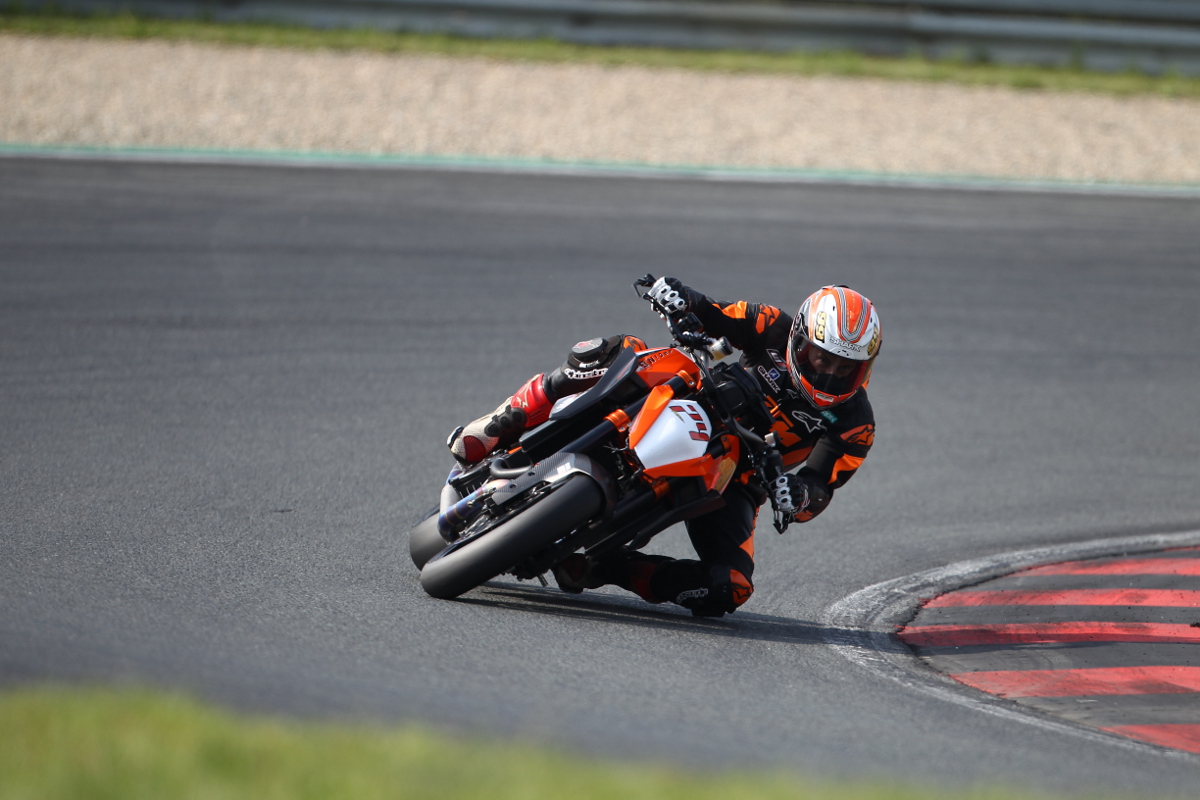 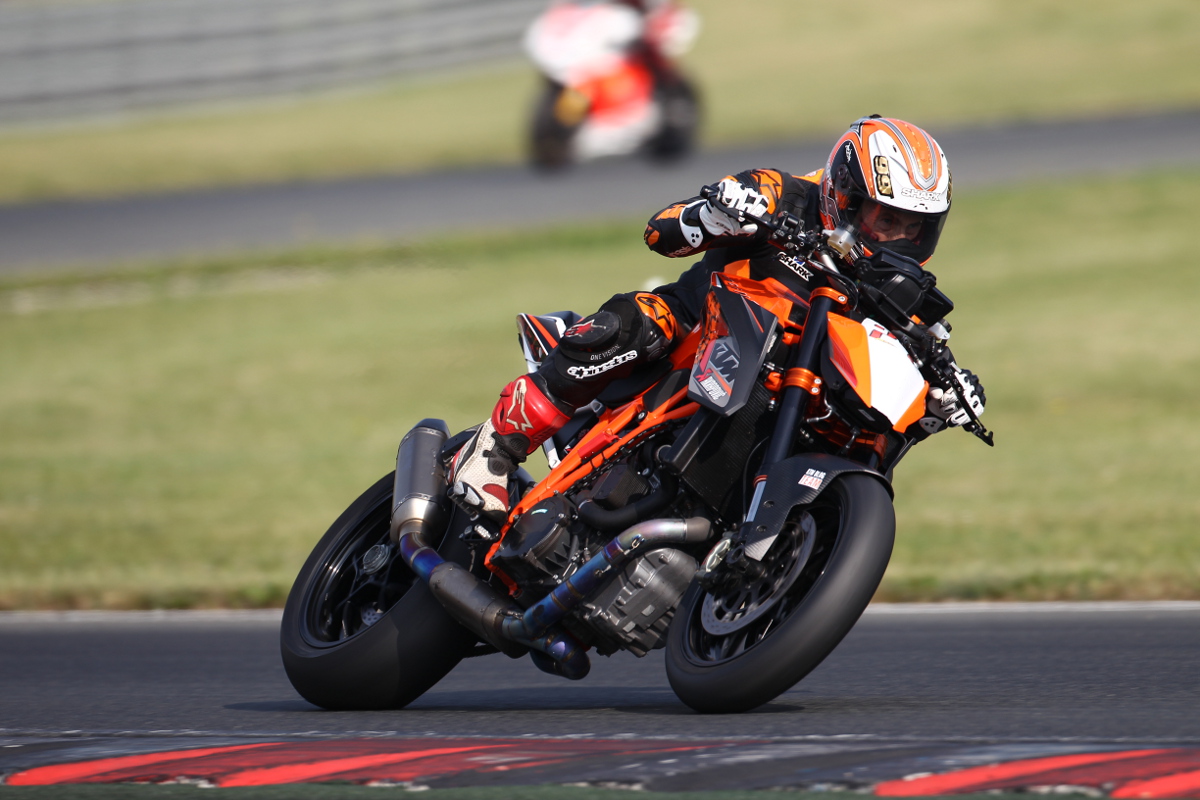 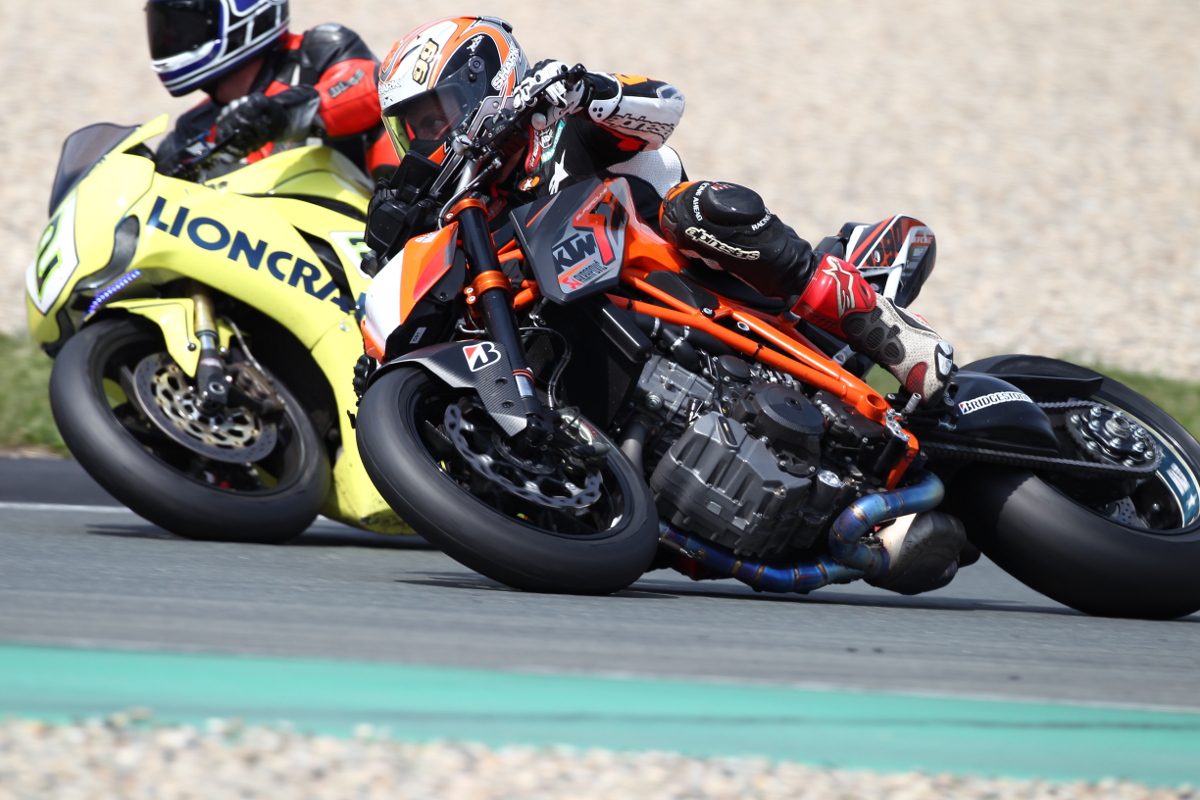 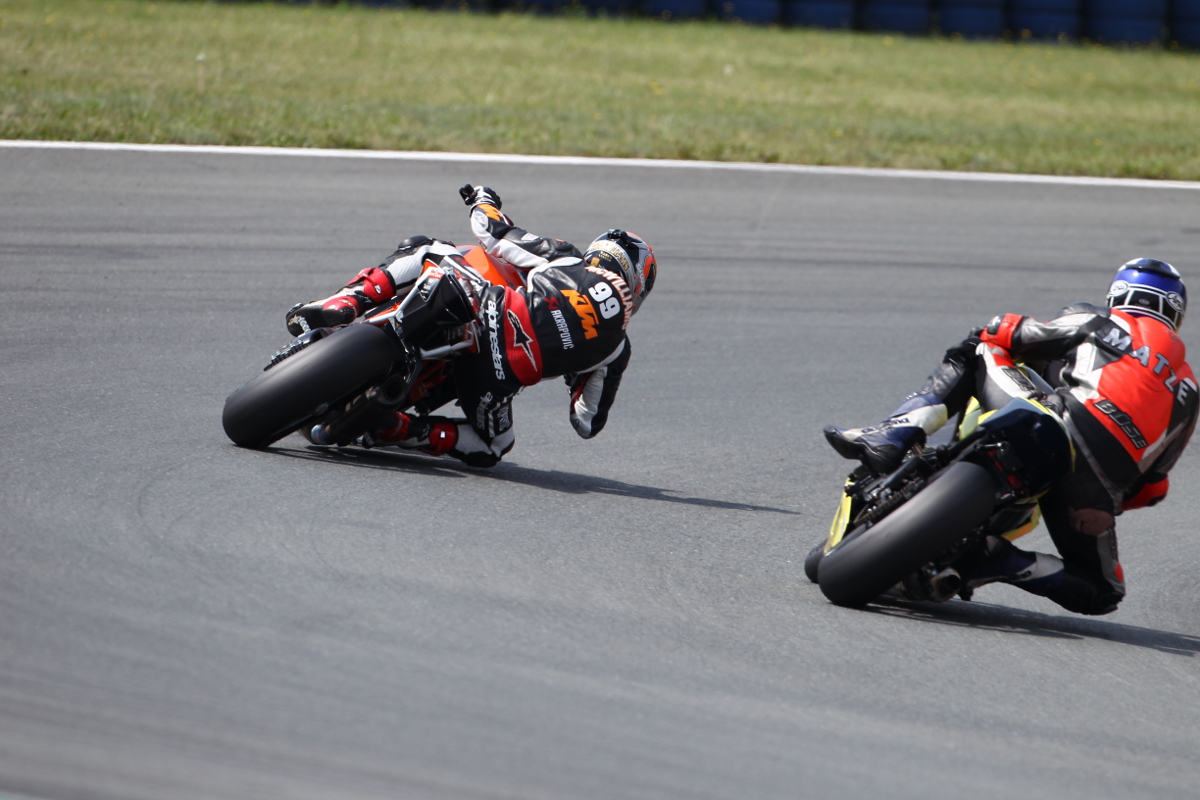 Logistically, however, the B-Boys have nothing to be shy about. Jeremy McWilliams has travelled from Sweden via Berlin. The former GP professional had been riding  a KTM 690 DUKE there for KTM Nordic, taking part in a 4-hour race. After Oschersleben, he’s off to Indianapolis and there he’ll be riding a few laps in the – hmm – Harley Cup for a US dealer. He won there last year. Kutti, a PR Manager in Mattighofen, has just emerged from the fireworks smoke, triggered by the announcement that KTM will be entering Moto GP in 2017. Only Olli, the Rocket from wonderful Wuppertal, will be enjoying something resembling a holiday. He has simply dumped his wife and kids with the Kuttrufs in Austria.

Everything comes good on race day. Another team is able to help us out with the Bridgestone stickers (Phew!). The one-hour morning practice session goes well for the Beast trio. Only Jeremy is unfamiliar with the track. Olli is going to ride from the start; Jeremy will take the second stint, and then Kutti climbs on board. Everything’s running smoothly, with only Rocket having to adjust the setup, when suddenly the higher midday temperatures see him battling with chassis judder. The starter grid consists mainly of faired four-cylinder racing machines in all capacity classes. To see the 1290 SUPER DUKE, with its mighty twin power, racing around this winding track set in the ‘Magdeburg Börde’ landscape is a pure delight. The thrust out of the bends is awesome, time and again somebody simply gets out-accelerated.  Open the throttle and past ‘em! 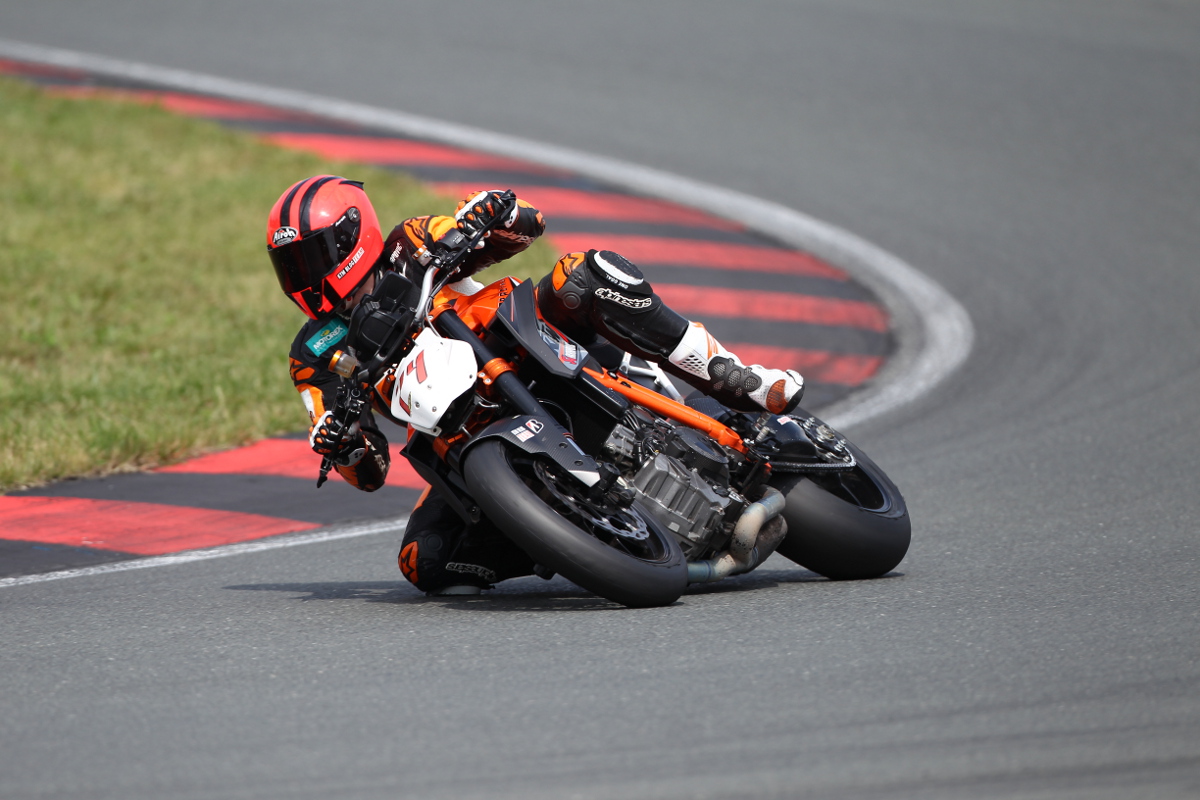 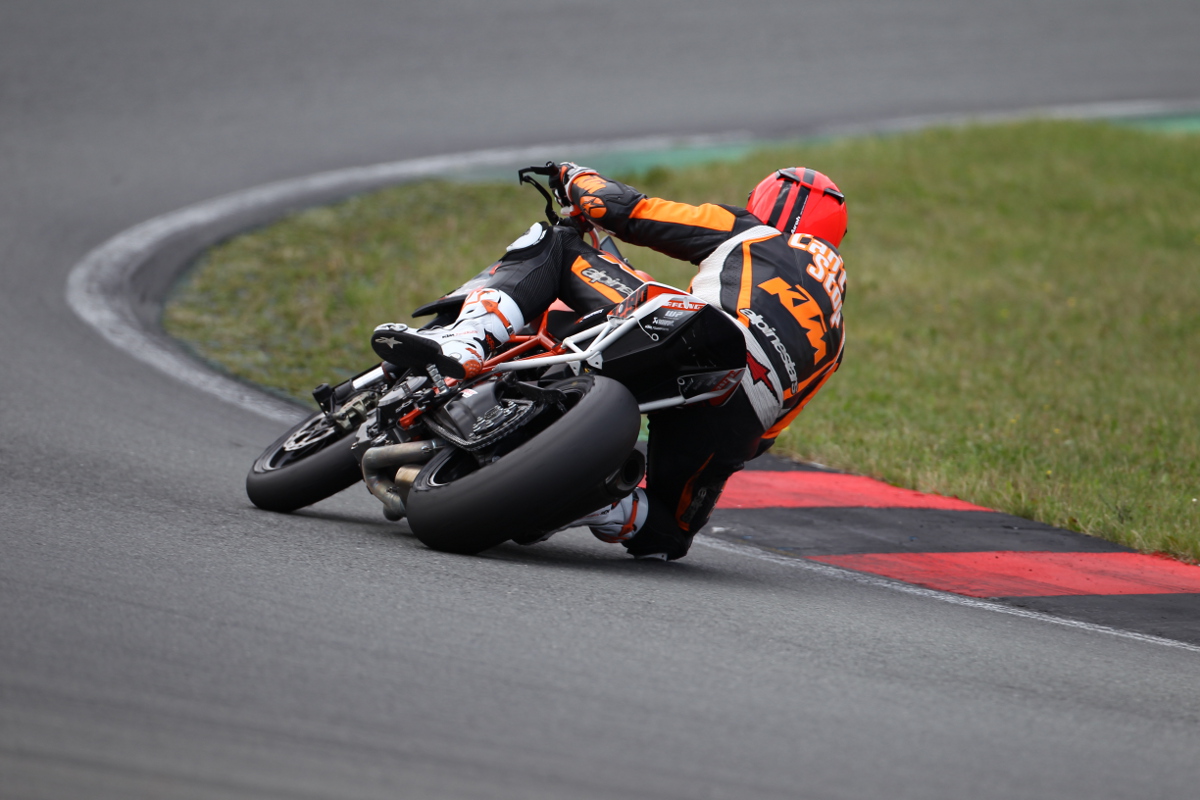 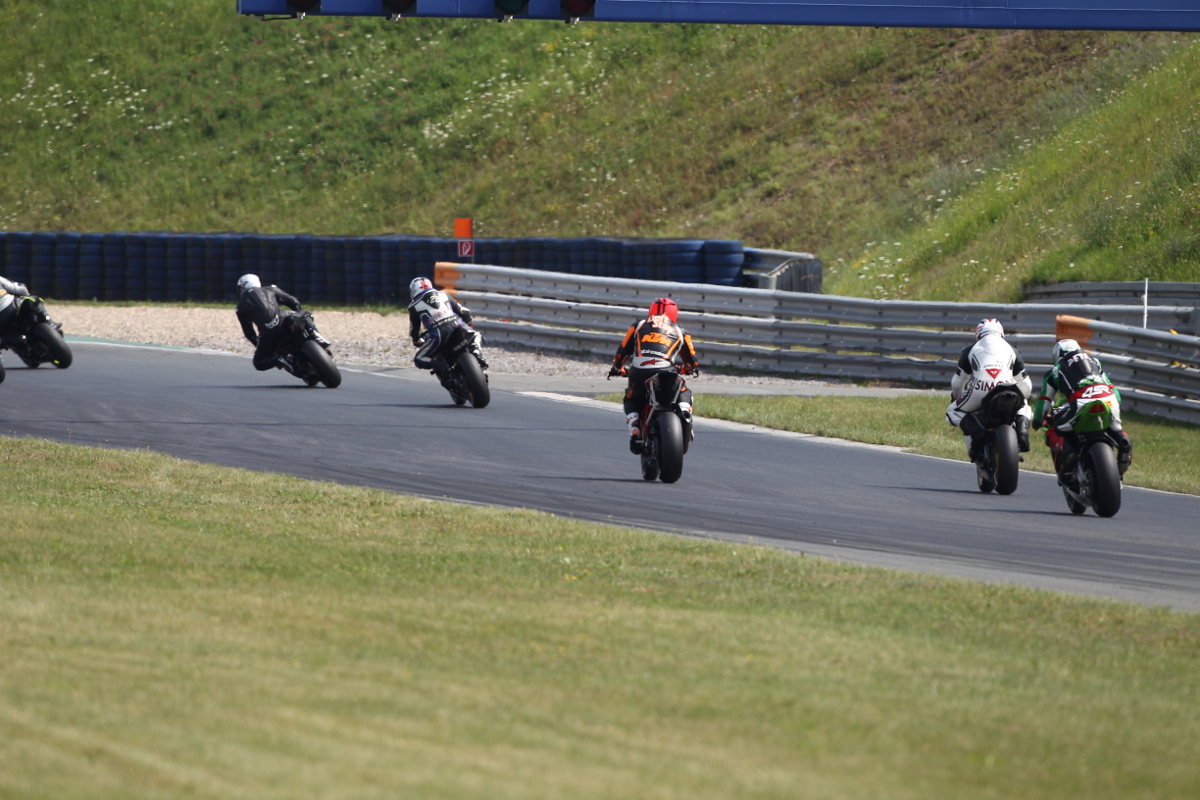 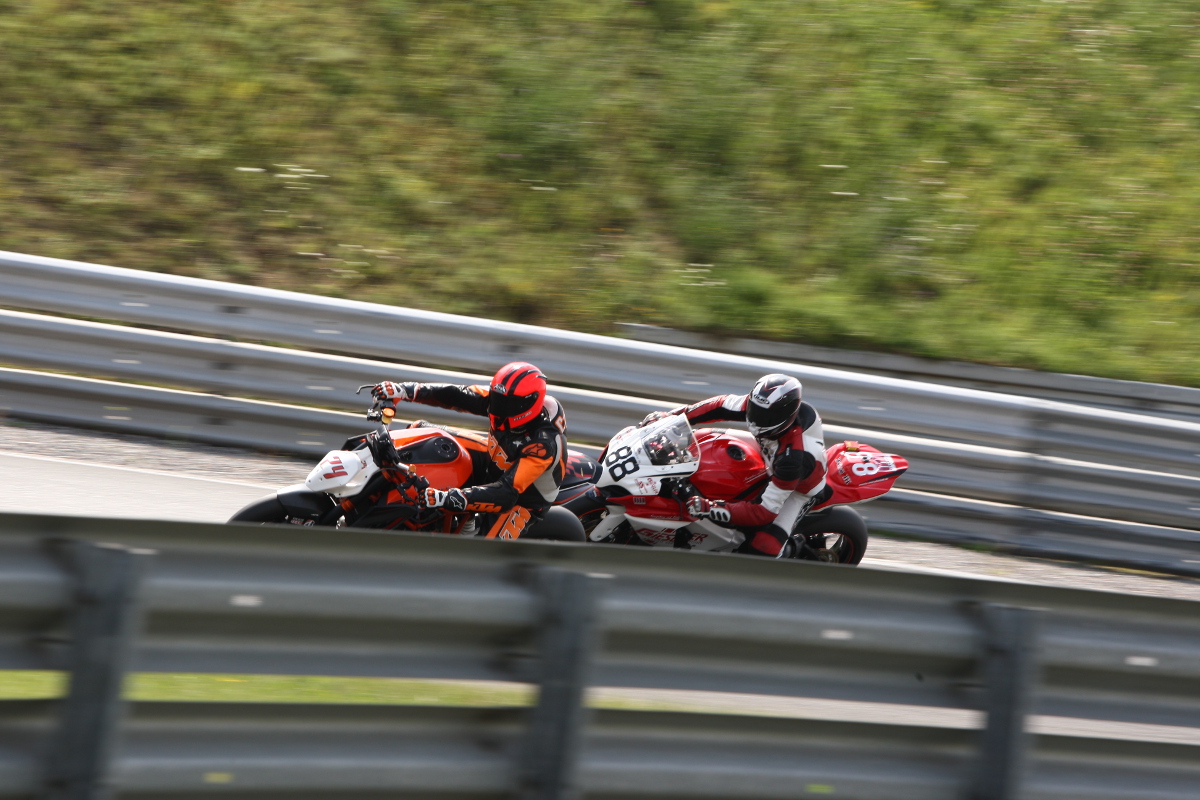 In the heat of battle, Kutti’s boot-slider gets ripped off. Typically, the Duke Battlers, who will be riding their race one day later, are loitering helpfully around in the Beast Boys’ pit: Fuel guy Huby resourcefully comes up with a solution and paddock stand god Klitschko skilfully crafts it. And straight away, a sawn-off piece of Suzuki brake disc is glued to the Alpinestars boot with a special adhesive – a boot slider to last a lifetime. 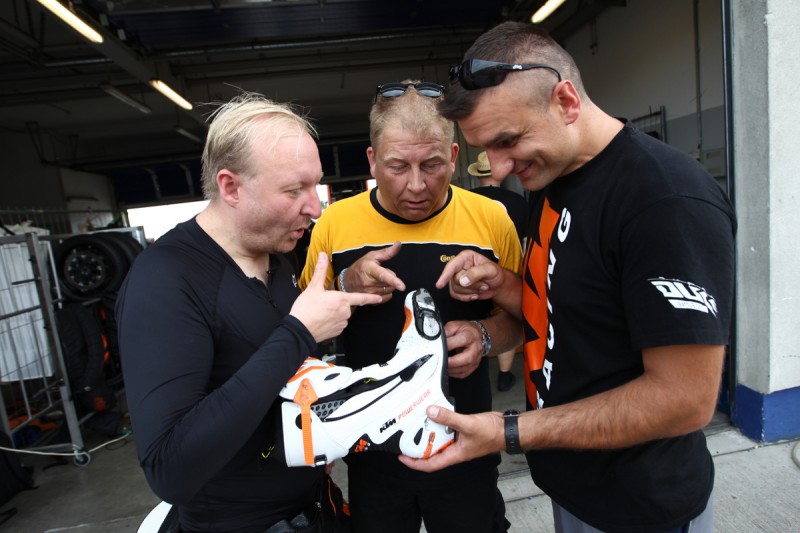 For the first four hours, the Beast Boys float back and forth between 3rd and 5th place. The field is struck by numerous crashes and the pace car makes several outings. Some curious scenes are acted out: A wrecked machine bursts into flames after it’s been loaded onto a rescue transporter and the extinguishing agent runs onto the track – cleaning it up leads to more delays. Two teams blast into the lead. HPC-Power-Suzuki and Steeldesign-BMW, who count among the most experienced teams, strike up a merciless pace and also cross the finish line in this order after six hours. Behind them comes the Grebenstein outfit on their Italian V4, which also claims first place in the One-Bike-Endurance category. 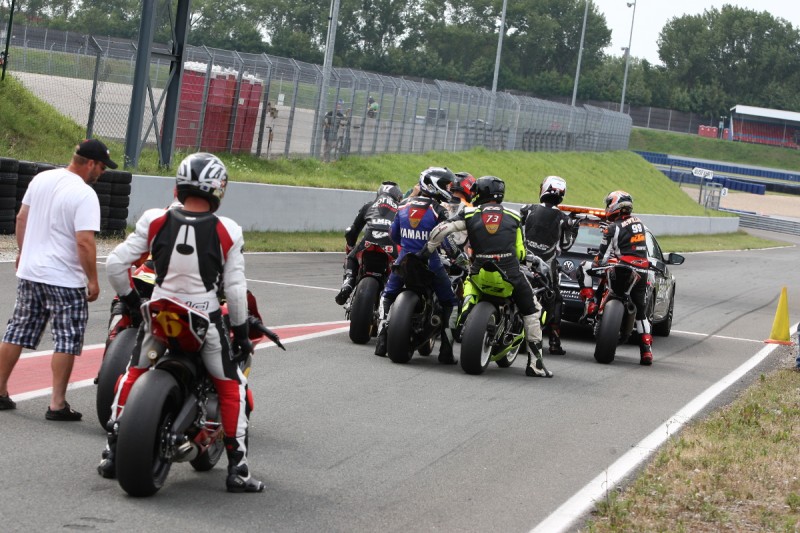 The KTM trio could have been belting across the line right behind them. Note the ‘could-have-been’. But damn it, the Outdoor mob put a stop to that. Never mind: Congratulations and much respect to everyone. And high-torque thanks too to all those who helped out in the orange pit. Team boss Konrad ‘Mop’ Schittko, ‘Bagger’ the mechanic, mastermind ‘Cleaver 5’, fuel man Huby and all the loveable loonies from the Duke-Battle. 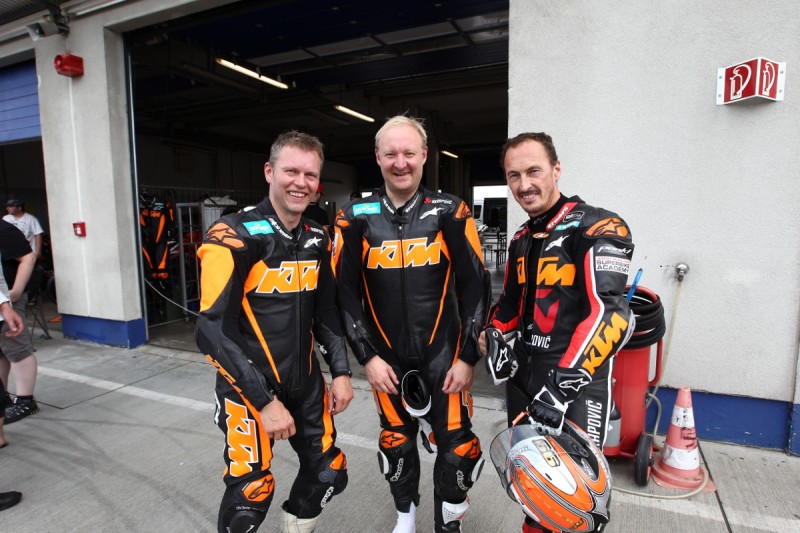 151 Responses to Column: A damned hot pursuit – the KTM Beast Boys at the 6-H race in Oschersleben