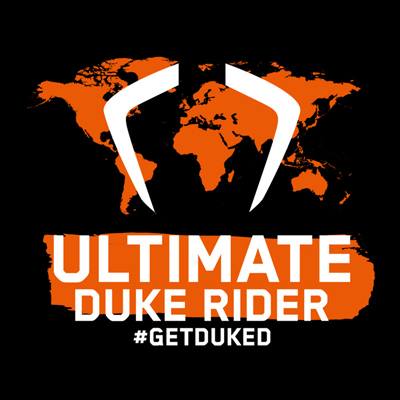 COULD YOU BE THE ULTIMATE DUKE RIDER?

As we are looking for the ULTIMATE DUKE RIDER through a Social Media contest, we’ve asked a few well-known DUKE personalities to tell us what it takes to be crowned as the ultimate DUKE pilot.

The KTM DUKE range is something of a phenomenon. In fact, it’s thanks to the first-ever KTM DUKE that has seen KTM grow into the superpower it is today. A quick history lesson…

In 1994, KTM’s first road bike with a 4-stroke engine dubbed the KTM DUKE 1 was born. The concept was simple – stick to the essentials and build a high-performance, high-quality machine around a potent single-cylinder engine. From there, the DUKE became a formidable street motorcycle, growing – not only in engine capacity – but in fans too.

Fast-forward to today, and the proudly NAKED sub-brand has evolved to include an entire royal family of DUKEs, from the small but mighty KTM 125 DUKE to THE BEAST – the KTM 1290 SUPER DUKE R.

But it’s not only powerful engines and lively handling that makes the DUKE range what it is. A big part of that success lies with the riders themselves. Here are a few insights into what makes DUKE riders tick and what it takes to be the ULTIMATE DUKE RIDER.

Riaan has a long and lustrous career in motor racing and has competed on an international level in almost all disciplines of racing. He is a demon on track and embodies the DUKE spirit in all he does. He raced a 24-hour race on a KTM 1290 SUPER DUKE R and even rode a KTM 390 DUKE up a flight of stairs into a recording studio. It’s quite fitting then, that he’s in charge of the DUKE range here at KTM HQ.

“The Ultimate Duke Rider is someone who lives and breathes the DUKE attitude. Someone who wears their heart on their sleeve and craves adrenalin. The engine capacity is irrelevant – it’s not about how much power you have underneath you – it’s how you use it that counts.” – Riaan Neveling

Lyndon doesn’t need too much introduction. Most will know him from his epic Races to Places video series. What many don’t know is that Lyndon is as capable on the tarmac as he is off it, having been racing motorcycles since he was ten years old. He’s raced everything from the Dakar to Erzberg and everything in between.

“For me, any DUKE rider gets their thrill from the asphalt, be it commuting, exploring or tearing around a race track. They are someone who screams agility and attitude, no matter what engine capacity. It’s their personality that’s expressed through sharpness and aggression, but without compromising comfort. That’s who the The Ultimate DUKE Rider is for me – someone who pushes the limits beyond the norm.” – Lyndon Poskitt

On weekends, you might catch a glimpse of Alex hanging around on the MotoGP™ grid. Or, you might recognize him from many KTM press conferences at the EICMA Motorcycle Expo. But many will remember him as a former MotoGP racer himself, who was instrumental in the development of the RC16 MotoGP project as one of our test riders.

“The rush that you get from riding a DUKE is something that I’ve rarely experienced in my life. And it’s identifying that ‘rush’ that defines The Ultimate Duke Rider. It takes someone who understands what the DUKE attitude is all about and uses that to their utmost advantage. And of course, in the case of the KTM 1290 SUPER DUKE R, it takes complete and utter bravery to try to tame THE BEAST.” – Alex Hofmann

As a teenager, Rok Bagoros took to the streets on a humble scooter. But in his hands, that scooter started a world craze, and gained the title of the best scooter stunt rider in the world.

Combining aggression and elegance in his own style, Rok is, together with his KTM DUKE, the embodiment of the DUKE attitude.

“The Ultimate Duke Rider is not only someone who owns a DUKE, it is someone who knows how to ride a DUKE. It’s someone who thinks above the machine and feels its spirit. Someone who makes the road his playground” – Rok Bagaros

53-year-old Northern Irishman Jeremy McWilliams is a legend. Not only did he ply his trade in MotoGP, he’s been working feverishly in the KTM stables developing the very beasts we admire. As KTM’s leading test rider for the DUKE range, Jeremy knows a thing or two about what it takes to be the Ultimate Duke Rider.

“What does it take to be the Ultimate DUKE Rider? For me I have pleasure and satisfaction every time I ride a KTM DUKE. As a lead test rider for the KTM 1290 SUPER DUKE R and KTM 890 DUKE R, we’ve had a lot of time to get to know each other. And what I’ve come to realize is – a DUKE is not just a mode of transport – it is so much more than that. They are motorcycles which define us as a person. The Ultimate DUKE Rider knows this. He, or she, is demanding with high expectations, who is passionate and lives life on the edge. You could even call The Ultimate DUKE Rider obsessed. We obsess about the details and how they look when we stand back to admire it after thrashing along a B road. We are excited to be part of this unique family because we stand out from all the others.” – Jeremy McWilliams

So, you think you have what it takes to join the ranks of DUKE royalty? Show us by putting up your DUKEs and entering via social media.

There are 3 easy steps that can lead you to the finish line:

Want to earn your place on the rostrum of DUKENESS? Then hit the link below for more information.

6 Responses to COULD YOU BE THE ULTIMATE DUKE RIDER?