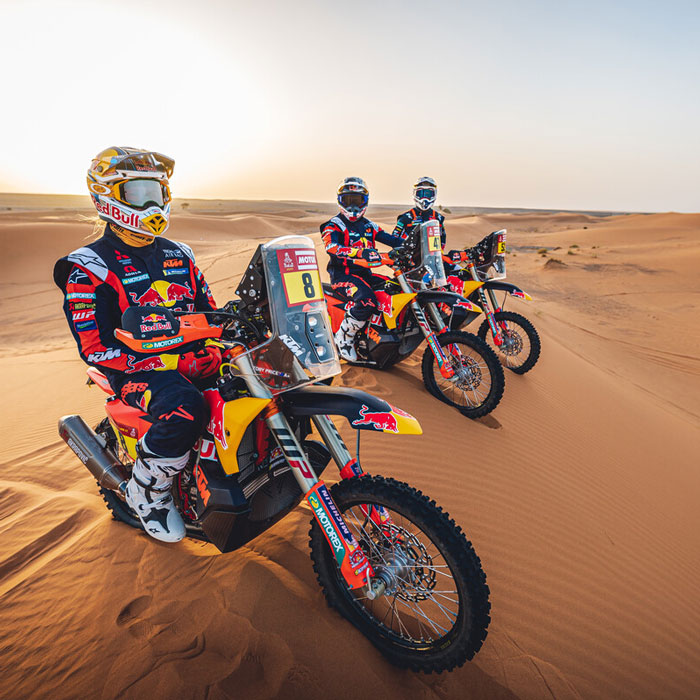 DAKAR 2023: A TRIO OF CHAMPIONS BUT NOTHING IS GUARANTEED

It’s somewhere between 40 and 50 degrees Celsius. You’re in the middle of nowhere with nothing but endless desert ahead, lost. The minutes are ticking by. With just a roadbook to keep you on the right route, hoping you hit your waypoints, you’re forced to back-track and figure out your mistake. The pressure is on, the fatigue has set in after just hours of sleep night after night, but this is Dakar. You have to dig deep – you have to find the way.

Endurance, difficulty, competition; the words ‘man or woman and machine’, are thrown around a lot these days, but at this race there is no saying more apt. When it comes to the world’s toughest offroad motorcycle competition, each and everyday riders head out into the wilderness on their trusty steeds knowing little will be easy.

It’s no secret that towards the end of each Dakar many riders say it will be their last. And sometimes it is. But, once the exhaustion or pain begins to fade, many reflect on their epic experience and unsurprisingly decide to go back for more. And we, race fans, absolutely love following it. Even the simple thought of holding the throttle wide-open kilometer after kilometer, or tackling mountainous landscapes almost beyond your imagination, only to be separated by seconds or minutes at the end of each day, is almost incomprehensible.

The most notoriously difficult off-road event on the planet begins this year in Saudi Arabia on New Year’s Eve, 31st December. A race of a million stories – like those of Heinz Kinigadner who nursed a bike across the desert for hundreds of kilometers in second gear having lost all of the oil out of his gearbox, back in the 90s, to Toby Price’s famous marathon stage ‘Bush Mechanic’ repairs on his destroyed back tire in 2021 – the bike technology, safety and location may have improved and changed over the years, but the ethos of the race remains the same. It’s tough, it requires a multitude of skills, it visits some of the most epic scenery on earth, which is exactly why we’re so captivated by it.

The Red Bull KTM Factory Racing Team is READY TO RACE. A trio of former Dakar Champions, there’s maximum talent and motivation heading into the 2023 event. Collectively, 2018 winner Matthias Walkner, Toby Price, the 2016 and 2019 winner, along with 2021 winner Kevin Benavides will all be aiming for the top prize. Austrian-ace Walkner is close to full fitness and ready for his return to racing following a challenging year of recovery from much-needed surgery. Australian Price is fighting back from a tough year and will put his experience from five podium finishes to good use. Teammate Benavides, who will take on his second Dakar in KTM colors, has built up good momentum ahead of this prestigious event. The Argentinian, who also runs a KTM dealership, has enjoyed a full year on the KTM 450 RALLY, which will pay dividends going into the race come the New Year.

Introducing a new bike in early 2022, one that was re-developed from the ground-up, from the Dakar in January through the World Rally-Raid Championship the bike has undergone further race development, which will certainly help the riders take on Dakar 2023. The purpose-designed machine is nimble, strong, and boasts many specific features, such as the navigation tower, and utilizes years of KTM winning heritage in its DNA – 18 consecutive victories in fact (from 2001-2019).

The 2023 Dakar route winds across the country from the Red Sea to the Arabian Gulf through all kinds of extreme terrain, from rocky ravines to open desert. There is a short prologue followed by 14 stages – two more than in 2022 – from Sea Camp on the West Coast, heading through to Riyadh for the rest day on the 9th of January, and concluding on the 15th of January in Dammam in the East. The total distance is 8,549 km, with approximately 5,000 km of special stage, which is where the racing happens, and is the largest amount of kilometers raced since 2014.

The longest special is 472 km, on stage seven, while the longest stage including the liaison is 876.24 km on stage six. Competitors will spend a total of four days in the ‘Empty Quarter,’ the aptly named sand desert known for its grueling climate and largely unexplored desert terrain. This is also where the marathon stage, where no over-night intervention from teams can be made, will take place for stages 11 and 12. Shorter special stages in the second week may look easier on paper, but the organizers have said to expect grueling days full of dune riding. Dakar 2023 certainly looks like it will live up to its fearsome reputation and be as notoriously difficult as ever.

There’s a new regulation for 2023 that will likely shake up the strategy known in previous years, meaning teams will have to change the way they approach the race. In the past, winning a stage was not always a bonus, as that rider would lead out the stage as the first rider the following morning, forced to ‘open the tracks’ and unable to follow the tire marks of other riders. Hunted by their rivals, often being the lead rider meant you’d lose time to your competitors. Being consistently close to the top of the result each day, but not first, was the best way to put yourself in contention for a strong overall result. The organizers, A.S.O, have now offered a bonus time for riders winning a stage, which will surely mean more riders will opt to battle for more stage wins, day after day. It will be interesting to see how this plays out along with A and B routes, meaning not all riders will follow the same roadbook.

As we begin the final countdown towards the 2023 event, excitement is most certainly building. We’ll be looking forward to the event kick off as the bikes are rolled out for the prologue on January 31st. Keep your eyes peeled for updates on the KTM Factory Racing social media and Red Bull Desert Wings channels for the latest info.

Check out the video below to hear from the riders as they finish their final preparations ahead of the race.

Good luck team from everyone at the KTM Blog!