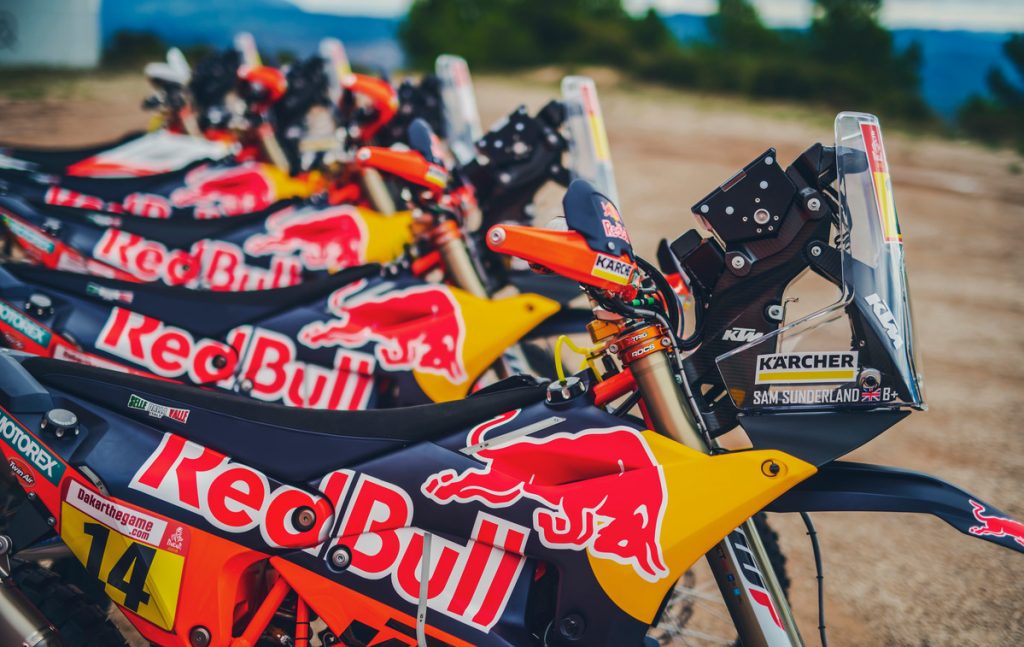 With the start of the 2019 Dakar Rally growing closer and closer, we take a look at 10 things you probably didn’t know about the world’s toughest cross-country rally. From the fuel used by the bikes on the long, arduous days to what the riders do when it comes to bathroom breaks when out in the desert … 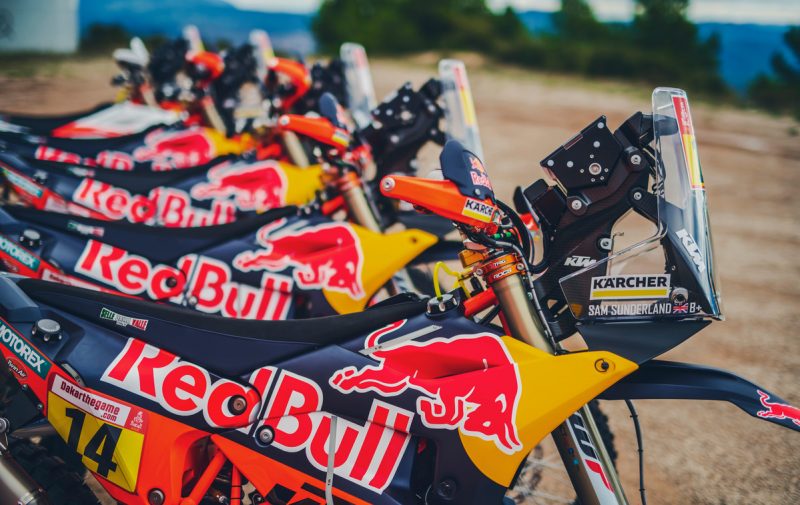 1. Origin of the rally
2019 marks the 41st edition of the Dakar Rally and the 11th successive year the event will be held in South America. Of course, the race got its name from its original final destination – Dakar, the capital and largest city of Senegal, West Africa. The race was first held in 1977 and was the brainchild of Frenchman Thierry Sabine who, after getting lost in the Ténéré desert while competing in the Abidjan to Nice rally realized that navigating the wide-open dunes would pose quite a challenge for a rally. 182 vehicles took part in the inaugural Paris-Dakar Rally, just 74 made it to the finish – 40 years on, 335 vehicles made the start of the 2018 event with just over half completing the 14-stage event. 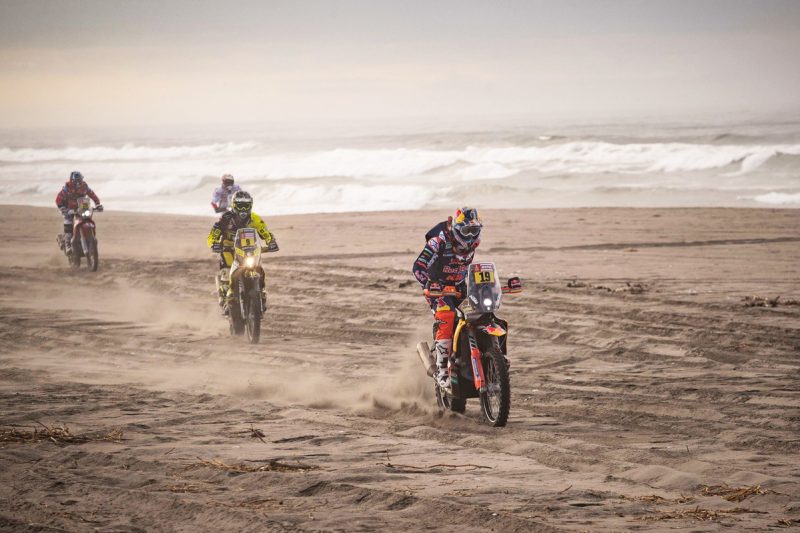 2. Mousses and tires
All of the KTM Factory Racing bikes run Michelin tires and mousses during the FIM Cross-Country Rallies World Championship and at the Dakar itself. For the 2019 race, which will cover a lot of soft sand, the team will run the desert mousse and tire combination that has proved so successful in competition. The mousse itself is a foam insert that takes the place of an inner-tube, inside the tire. It’s puncture-proof and can withstand a lot of abuse from even the roughest, rocky stages. 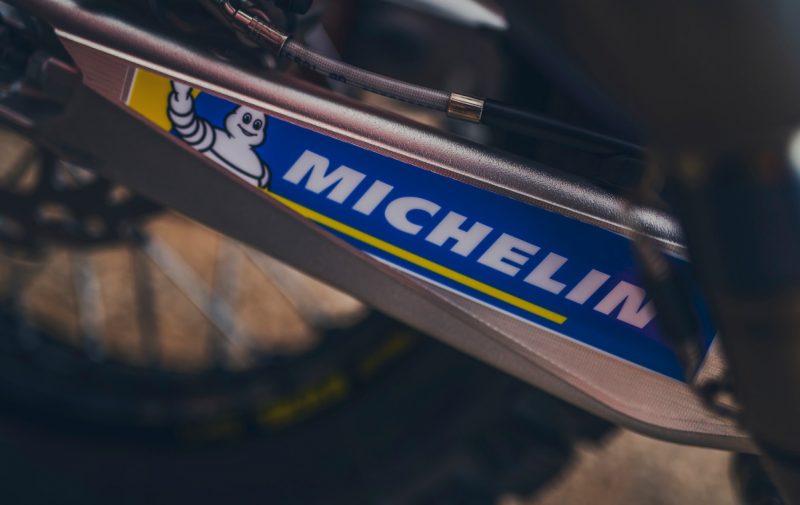 3. Fuel and regulations
Unlike other motorsport events where a control fuel is used, petrol at the Dakar is not regulated by the organizers. The team will always try to use the highest quality fuel available to them and will aim for a minimum of 98 octane for maximum performance. During the race riders will stop at refueling points, which are placed so that there is never more than 250 km between stops. Suggested petrol stations are listed on the road book too, should competitors need further fueling. Receiving petrol from fans or locals is not allowed however, although if a rider is forced to do this it normally means he’s having a seriously bad day and protests are rarely made in this case. 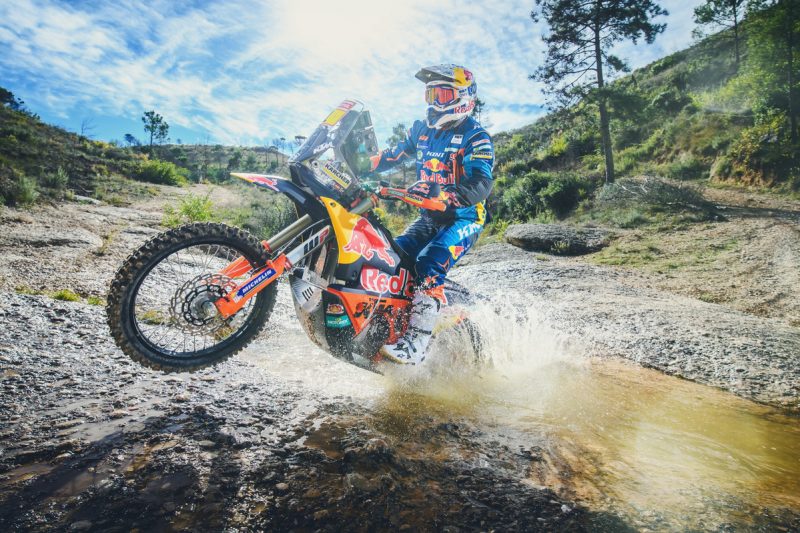 4. Riders’ tools and maintenance
Part of KTM’s pre-Dakar rider training program involves working on the bikes. Riders are shown how to fix the problems they may face while out in the desert. Although they can’t carry a huge array of parts and tools, generally riders carry sets of brake pads, spare clutch and brake levers, a fuel injector and the tools required to replace these items, and to carry out basic maintenance on the bike and fuel tanks. Two of the biggest issues faced in cross-country rallying is damage caused by a crash or when the bike is flooded, when crossing a river for example. Damage can easily happen to the navigation tower in an accident and when a rider loses their instruments, they have no option but to either wait for another team member to guide them home or to follow the tracks in the sand ahead of them from other riders. If the bike is flooded, riders have to first remove water from the exhaust system and then from the engine itself by removing the spark plug and turning the engine over on the starter. If water gets into the gearbox or fuel system the rider’s problems become much, much worse. 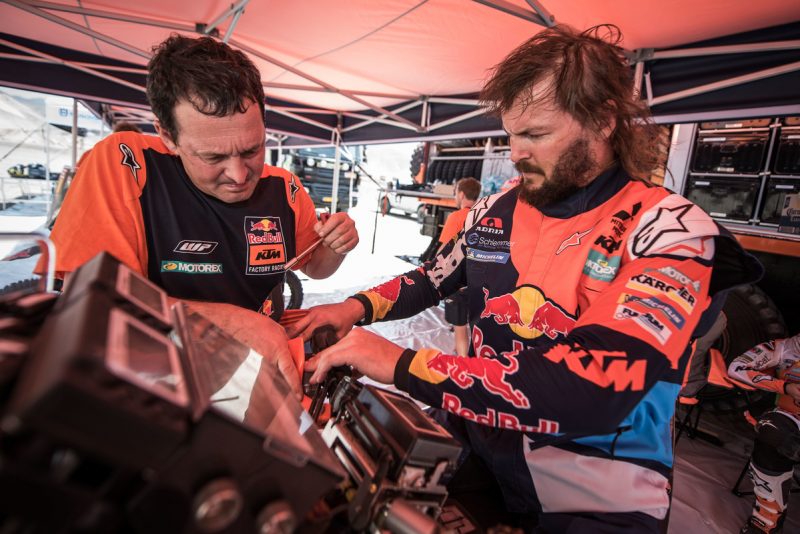 5. Getting some sleep
The Dakar Rally is tough. Even at a slightly shorter length of 10 stages the 2019 event, held exclusively in the Peruvian desert, will pose a huge challenge to all riders. The physicality of riding through the open desert will be matched by the mental strain of navigating the route – the four days in Peru easily proved to be the toughest of the 2018 race. After spending hours in the saddle, riders have little chance to rest due to the time required to go through the following day’s road book and rider briefing, from the organizers. On average, even the factory team riders only get six hours of sleep per night before each grueling day. Riders in the Malle-Moto class who have to work on their own machines each night before they can even think about getting some rest, often survive on only three-hours sleep before setting off again once more. It takes incredible mental strength just to make it to the start line each day, let alone complete the rally. 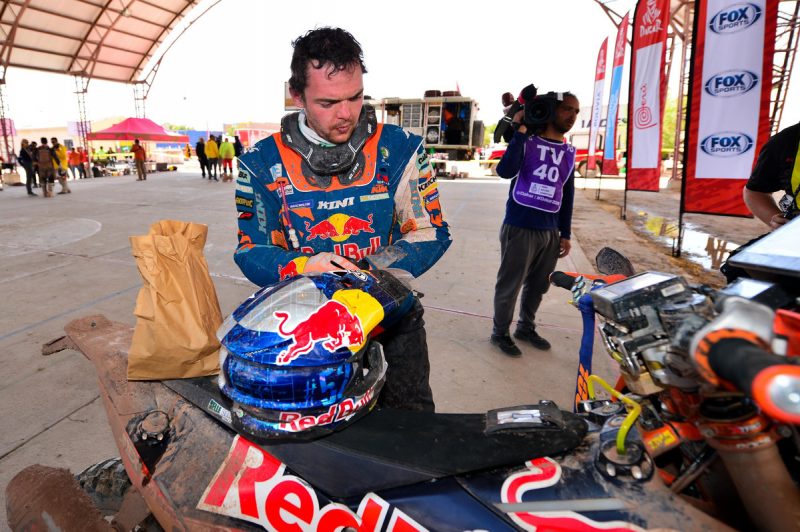 6. Food and nutrition
Skill and speed on a bike alone are not enough to get you through the Dakar Rally. The KTM Factory Racing riders work closely throughout the year with nutritionists and trainers to maintain the level of fitness and health required to compete at the very top level of offroad motorcycle sport. The team will aim to be at the absolute peak of their condition when the rally kicks off in early January. Of course, the nature of the sport means that this is not always possible – injuries sustained during the season can pose problems when racing for days on end in the desert. Illness and sickness can also arise when riders are physically tired or exposed to unfamiliar conditions.

Making up an important part of the KTM squad are a chef and a doctor, both of which stay with the team for the duration of the rally. The chef provides the balanced diet required to sustain the riders over such a long and arduous event, the doctor is on hand to maintain their physical condition. Even a small injury sustained in a crash early on can have a huge effect come the end of the rally. Bruises, sprains and general muscle fatigue can be countered with the correct medication and physiotherapy. In the same way that the bikes undergo maintenance at the end of each regular stage, the riders too need a certain amount of tuning. 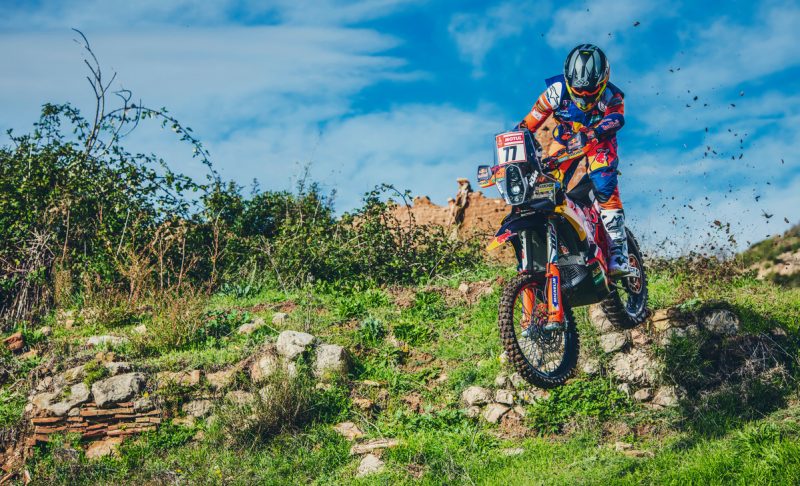 7. Altitude
Although not so much of a factor in 2019, riding at altitude can cause huge issues for both the rider and their bike. Luckily, with a height of around 2,500 meters above sea level, the highest stage in the forthcoming event will not challenge the competitors anywhere like the 2018 event. It is estimated that the stages held at close to 5,000 meters reduced the power of the KTM 450 RALLY bikes by up to 30%. The effect on the riders themselves was perhaps even worse. Already tired from the days leading up to the mountain stages, riders found the route through Bolivia exhausting. The lack of oxygen at such an altitude robs the muscles of strength and makes it extremely difficult to concentrate – two things that are most definitely required when averaging 90 km/h through fast, rocky terrain. Again, overall fitness is very important for the riders with many spending the winter break training at altitude in preparation for the rally. 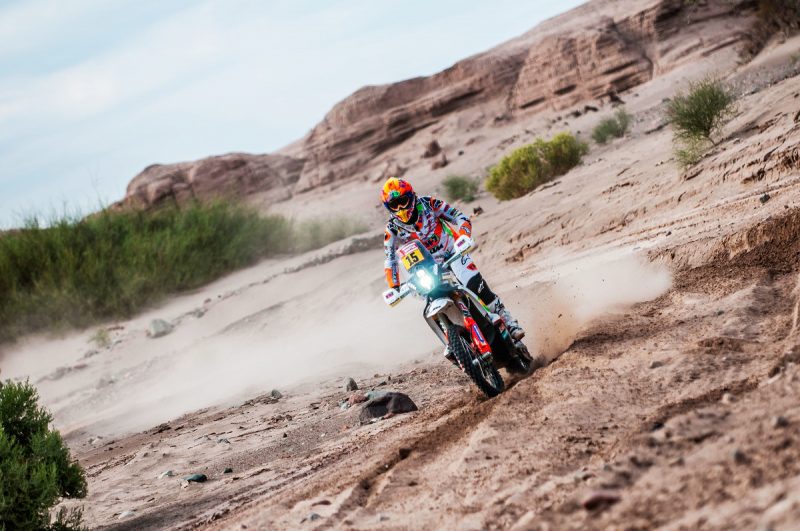 8. Bathroom breaks
It’s a fact of life and affects everyone, but when faced with hours on a rally bike while trying to maintain the highest average speed through a featureless desert, using a nice clean, well-appointed bathroom is not always possible. The choice of how to handle this issue ultimately comes down to the rider and each one will approach it differently. Often the biggest worry when expending a lot of energy on the specials is more a case of dehydration. Temperatures on the Argentinian stages last year topped 40 degrees around the town of Fiambalá, if a rider has an accident and loses the water from their hydration system it can pose a real problem if they are still a long way from the next checkpoint. Illness is another factor and can easily force a retirement from the event. Unfortunately, if faced with a case of vomiting or diarrhea while contesting an event, the rider has no choice but to go on route. As unpleasant as this sounds, it can still mean the difference between securing a good result at the climax of the event or suffering a DNF. A good shower however, is definitely necessary at the end of each day! 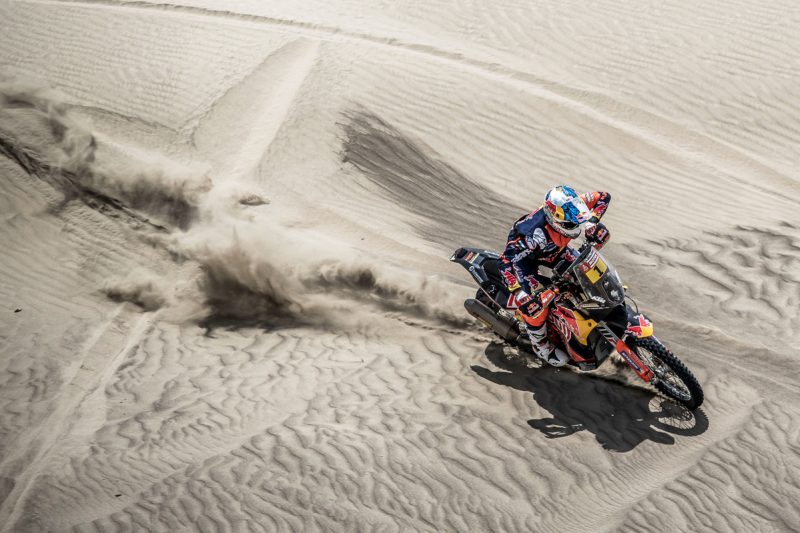 9. KTM’s support rider
For 2019, Mario Patrao will ride for the first time as a fully-fledged factory rider within the KTM team. It’s not his first Dakar or the first time riding as support rider, but it is the first time the experienced 42-year-old will be officially classed as riding within the team. An accomplished rally competitor, Mario is the most decorated Portuguese offroad rider with over 25 national titles to his name. His highest Dakar finish was 13th in 2016 where he also won the marathon class. Due to take part in the 2018 event, a bad case of appendicitis caused Patrao to miss the race after having to undergo surgery just days before the start. Although aiming for a top-10 finish at Dakar 2019, his role as support rider within the KTM Factory Racing Team means he may be called upon to assist a rider ahead of him should they run into trouble. If a rider fighting for the win should suffer a technical issue or have a crash that damages their machine, Mario can stop and assist them to get them back on track as swiftly and efficiently as possible. His help could be the difference between a rider winning the event or being forced to retire. 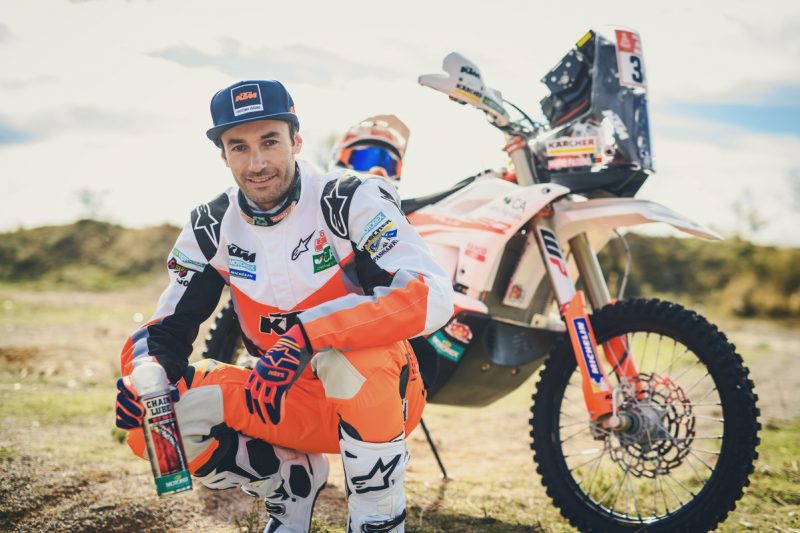 10. 17 consecutive wins
Nowhere else in top-level motorsport is there a domination such as KTM’s over the bike class at the Dakar Rally. Matthias Walkner’s win at the 2018 event was the 17th consecutive victory for the brand and the team are just as keen to make it 18 in a row when the rally comes to a close in Lima, Peru on January 17th. Imagine your local football team winning the league for 17 years solid or a single manufacturer dominating Formula One for so long. Starting from the late Fabrizio Meoni’s win on his KTM LC4 660 R back in 2001, the Austrian brand has won every single Dakar Rally since. Even when the event switched to South America in 2009, KTM kept on winning – 10 of the victories went to the legendary pairing of Cyril Despres and Marc Coma who between them won every single rally from 2005 to 2015. Through changes to the continent, different countries and even a reduction in the bike capacity, KTM has remained on top. This is purely down to the team working as one to produce an unstoppable force in what is truly the world’s toughest motorcycle event. 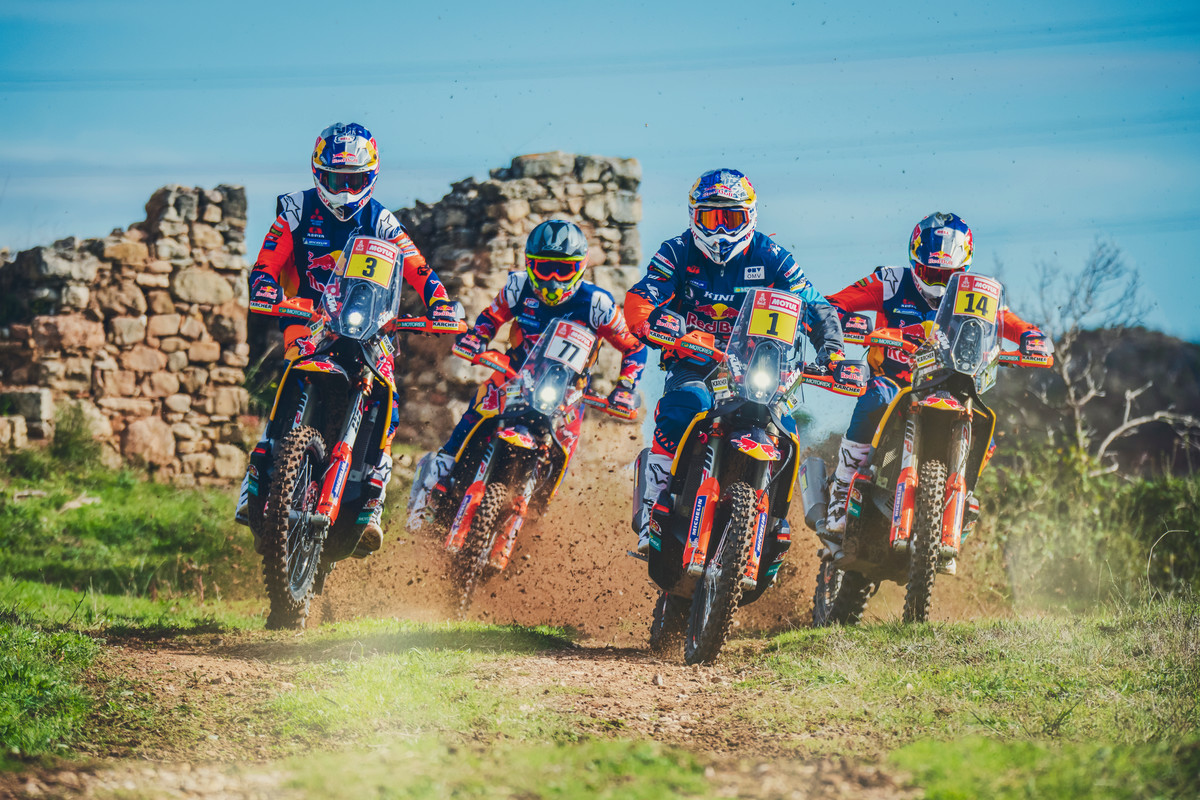 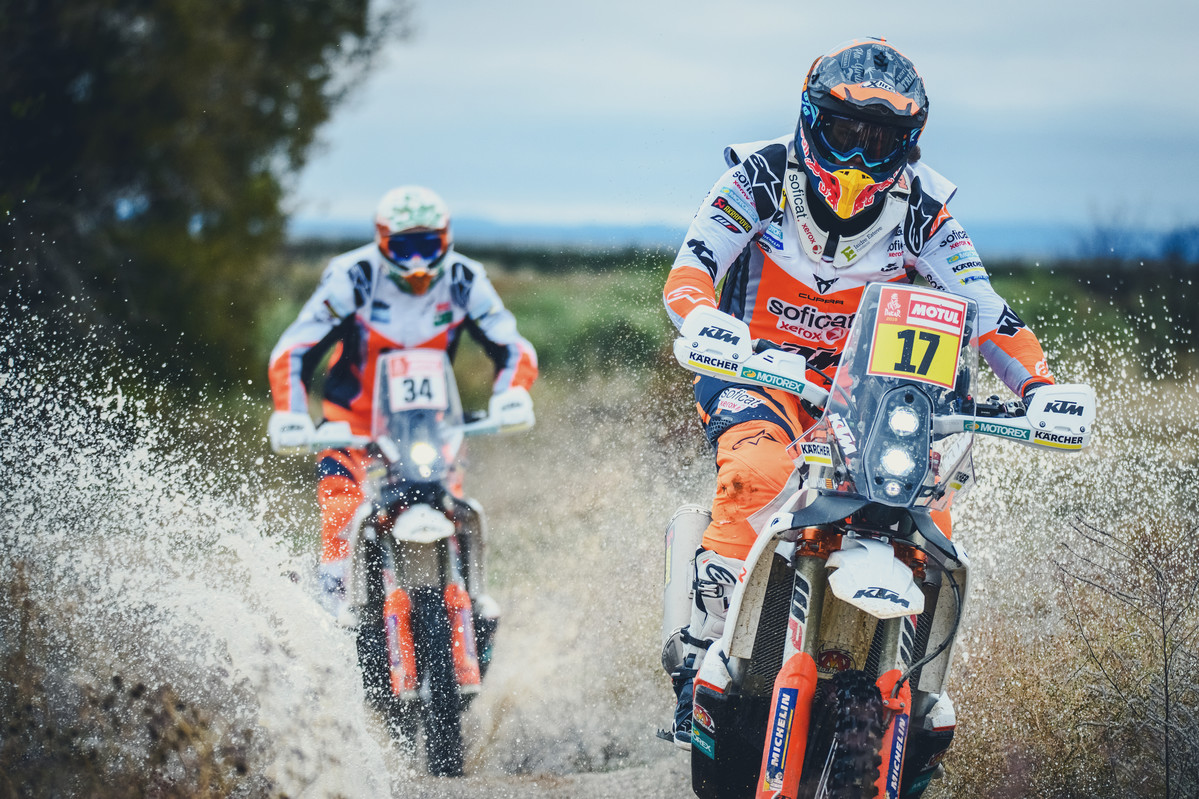