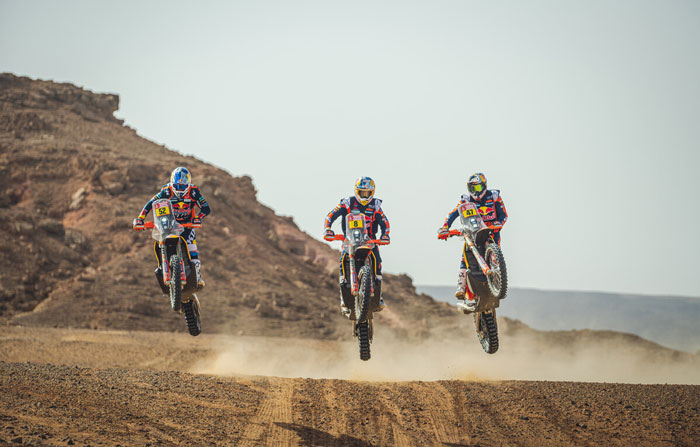 DAKAR REST DAY: A LONG WAY TO GO BUT IT’S TIGHT AT THE TOP

The first big motorsport event of the year is yet again throwing curveballs and creating drama as the world watches on with intrigue. As many conclude their holiday season, the 2023 Dakar Rally is winding its way across Saudi Arabia, and the scenery is as beautiful as it is brutal. While the Red Bull KTM Factory Racing team is preparing for the second half of the race, we have taken a look at the stats and the pictures from the last week of competition.

After eight stages, one of which (stage 7) was cancelled due to adverse weather, we’ve seen elation, emerging talent, defiance and disaster amongst the top-ranking riders and with just over 20 minutes separating the top 10, there’s everything to play for after today’s rest day in Riyadh (January 9).

A victory in the prologue for Red Bull KTM Factory Racing’s Toby Price was the kick-off for this year’s event, and the Australian, along with teammates Matthias Walkner and Kevin Benavides enjoyed a strong start in the opening stage with the KTM 450 RALLY. There was no warm-up though, as a daunting and incredibly tough Stage 2 caught out some of the very best riders, with Benavides describing it as ‘possibly the hardest stage he’s ridden in the last three years of Dakar.’  It was 430 kilometers and nearly six hours of some really tough, rocky tracks through difficult riverbeds and more; it’s sure that the mental intensity to try to ride ‘fast’ in those conditions without making mistakes was just as tough as the physical drain of the hours on the bike.

In contrast stage three was described by Walkner as ‘one of the most beautiful stages’ he’s ever ridden, although the Austrian has been battling an injury he picked up in the second stage and has valiantly fought on to be 10th in the standings going into the rest day.

Price was collected up in a fellow competitor’s crash on stage five, but he and Argentinian racer Benavides have maintained consistent results to be at the halfway point in relatively good shape. Maximum concentration in the desert dunes and across the slippery rocks has been required, but in this race it’s that consistency, and strategy, that pays off.

Coming into the much-needed rest day where riders re-group ready for the second half of the race, Benavides is second in the standings, just 13 seconds from the lead, while Price is fourth and only 1:58 back. It’s tight at the top. A mention for KTM-supported Mason Klein who has done an incredible job so far to be third in the rankings with a stage win on the second day in that super-tough stony stage, and has taken a number of top three finishes. Not much has been said so far about the new bonus offered for winning a stage, or the A & B routes, which are new for this year’s rules, but we’re sure that the second week will bring as many thrills as the first as the riders enter some of the most untouched areas on earth in the ‘Empty Quarter’.

The facts so far: