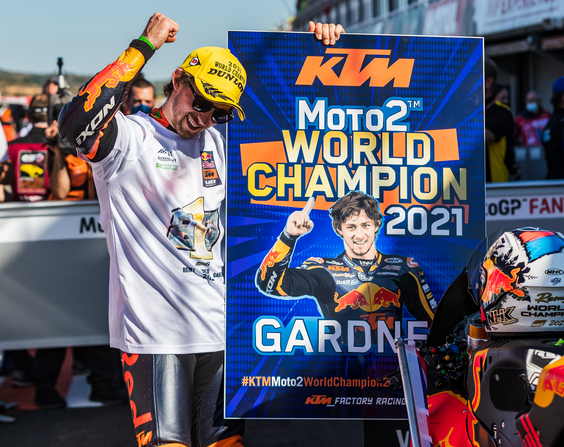 A cagey run to 10th position in Valencia on November 14th made Remy Gardner the twelfth champion in Moto2™ and only the second ever Australian to win in the ‘intermediate’ class. Here’s how the 23-year-old clinched his title at the eighteenth and final round of 2021 Moto2.

It’s Sunday in Valencia, Spain and Remy Gardner looks pale and tired. His fatigued expression might be due to a lack of sleep: his crash nine days previously in Portugal left him with several cracked left ribs. Perhaps it’s because of the pressure of leading the world championship from round three and having to constantly fend-off the outrageous speed of Red Bull KTM Ajo rookie teammate Raul Fernandez. His weariness could also have something to do with the weight of expectation, of being 1987 500cc World Champion Wayne Gardner’s son and the desire to achieve his goal –  a target that Ajo team predecessors like Brad Binder and Miguel Oliveira could not reach – and claim the Moto2™ crown.

The Australian, who has been based in Catalunya for most of his childhood and adult life to-date (he is fluently bilingual) is sitting in front of select media and trying to articulate how he stitched together a superb Moto2™ campaign. It was his sixth in the class and his first in Red Bull KTM Ajo colors. Gardner’s term with the all-conquering crew run by Aki Ajo – a key platform in the KTM GP Academy to promote and develop young and promising talent – will last just one year. He had already signed to enter MotoGP for 2022 with the Tech3 KTM Factory Racing Team, even before the #1 medal came his way.

Ajo, Gardner and Fernandez decimated Moto2™ . Between the two riders they won 13 of 18 Grands Prix, finishing 1-2 on the podium a remarkable seven times. There were only two rounds of Moto2™ that did not feature a Red Bull KTM Ajo machine on the rostrum. Fernandez dazzled with his speed, Gardner with his racecraft and consistency. Fernandez crashed out in Germany, Britain and Emilia Romagna, while Gardner’s DNF in Texas really narrowed the duel heading to Portimao, Portugal. Gardner hurt himself on Friday but opted for a different tire choice compared to the Spaniard on Sunday and owned his fifth Grand Prix and twelfth podium in masterful fashion.

Defeating adversity has become something of a trend for Gardner. His family broke up, he pursued a career backed by his father but struggled on uncompetitive machinery and was an ill-fit in Moto3. He smashed and broke both of his legs in a motocross training accident in 2018 that set his career back and by the time of his first GP podium finish in 2019 on the way to 15th in the world he’d already accumulated plenty of race mileage without much distinction. In 2020 he moved to 6th, won his first Grand Prix and then firmly entered Aki Ajo’s radar. The Finn got to know the Aussie and then decided he wanted to take a chance on #87.

“I remember our first face-to-face talks were quite intensive and tough and emotional,” Ajo said to us on Sunday at Valencia. “I would not say we were fighting…but we had some different opinions and I was quite clear that I believed in him and I liked his style but quite a lot would have to change with the attitude if we worked together.”

“He was talking technical details at this moment, for me it was too much,” he continues. “He also had some doubts in his head that he was too heavy and the bike is slow because of this-or-that. I was shooting everything down when we started talking and he was quite shocked. But I also felt that this guy was quite strong: I saw he was emotional but also accepting, and he was quickly ready to start work. I believed this was the first good sign. So, we went step-by-step moving him into the team and with his new crew.”

Ajo kept the job of racing and setting expectations simple. He followed his mantra of creating circumstances around the riders that allowed them to express their full potential, even drawing on the positivity of their bad times. “What I always say to them, especially to Remy after races when he was thinking about those tough years in the past, would be ‘hey, without that, maybe you are not here…and at least you are not staying where you are’. I think the tough moments are necessary when you reach the top and you want to stay there.”

Ajo still had to balance two raw and spectacular talents as they chased the team’s second Moto2™ world championship and their first in Red Bull colors and for the KTM GP Academy. “I was afraid of it [the dispute] but it was actually much easier than I expected,” he smiles. “Maybe we got lucky or something! Both respected each other in an incredible way in the box, on the track and outside, everywhere.”

It has definitely been intense. Raul did an amazing job this year. As a rookie he really put-it-to-me and made me work for it. This is a such as amazing team, so many podiums and great races. An incredible season with so many Parc Fermes [moments] and trophies. There were times when I finished 2nd and thought ‘ah, a bad day’ but you have to enjoy every moment. The last quarter was really intense with Raul being so fast. I made a few mistakes but he did as well. Consistency was key in the end and the days when I couldn’t win or Raul did then it was about finishing with whatever points I had. Ultimately this is what got us across the line.

On…dealing with the Valencia race, the restart and nerves

It was difficult to move around the bike aggressively [because of his ribs]. It was about finishing the race. The restart played havoc with the ritual of getting set, getting your mind set and ready to go out and do your thing. It means you have to do all that all again. It was hard to keep your nerve and not over-ride. It looked like it was chaos in front of me and I didn’t want to get caught in any drama, so I sat at the back of the group and did my race. Definitely a different strategy and plan compared to the other races this year. I knew what I had to do. I had everything clear. Aki as well kept me calm.

On…his career building to this point

For sure there have been so many hard years…but then decent success this year. I really changed my ‘chip’ last year and started going a bit better. Even though I didn’t have the most podiums I managed to get my mind under control and everything was falling into place. I was trying to keep positive about everything. 2015-2019 was really tough for me. There were points in my career where I thought ‘that’s it, the end of the road’. Especially after the injury, fighting back from that was incredibly difficult. The worst one was breaking my legs, it was a really big accident, a really bad accident. Not just to my legs but a hit to my head and back. I remember being let out of hospital and going home thinking ‘I don’t have a ride, don’t have any results, career’s over’. I was playing on the PlayStation one day and thought ‘what choice do I have?’ I could sit there and cry about it or get up and push like a ‘m*****f****r’ until I was dead. So that’s what I did. I picked myself up and did physio for eight hours a day until I was passing-out and getting dizzy spells. I wanted to walk earlier than they said. The doctor reckoned three months in a wheelchair and by the third week I was already waddling around the house like a penguin. It was some never-give-up spirit I guess, and it paid off.

I’m sure a lot of people think ‘the Gardner name; it’s gonna be easy’ but it has been really tough. Not really in a personal way and the pressure of being ‘the son of Wayne’ but there were actually a lot of doors that were closed for being that ‘son of Wayne’. Of course, there were a lot that opened, and he helped me a lot in the younger stages of my career. I would not be here without him. In the last four-five years it has been more ‘on me’. Once you get to the world championship you are a professional athlete and you are paid by the team and you work with them. That was on me: to learn, to improve and work with other people. The last part of this season was very tough, pressure-wise. In Misano we had the rain and then the double Long Lap penalty and I still managed to bring it home in 7th, which is what counts. Any points are better than no points and experience helped. You make mistakes, live with yourself and move on. You learn all the time. My best race ever was Portimao. That was the decider. I stuck to my guns with the hard tire and really believed in myself. That was key.

It seems that the level of us – the younger generation guys – is quite high. There are a lot of race winners and world champions. Winning the title is incredible and it gives you an understanding of what you need to do and how you need to do it, how to contain your emotions and push when necessary, to take the points when you can’t win. It gives you a lot of experience managing pressure more than anything, I’d say. Hopefully I’ll adapt well to the MotoGP bike. There is a lot more to learn and a new class to get to grips with. I just want to have fun and get in there with the big boys. I cannot wait.

Gardner gets up to leave the press conference room. He’s carrying the celebration helmet and wearing the white dedication t-shirt. He’s accompanied by ever-present girlfriend Clara and her family. One job is done, a whole other game now awaits. “I have to say that Remy is a really, really nice character and I have a place in my heart for him,” says Ajo. “It was really easy to work with him but at the same time you can always see how hungry he is and how much he is willing to sacrifice.”

6 Responses to DELIVERING AMONG THE DOMINANCE: REMY GARDNER’S MOTO2™ FEAT