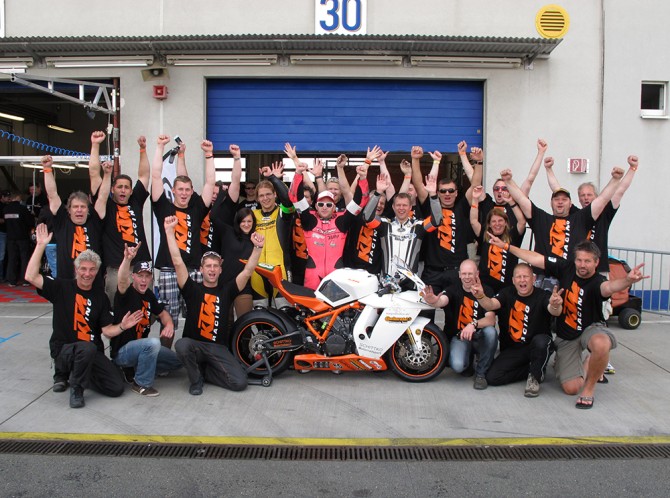 Enduring the winter with some Endurance

“It’s bound to change, just hold on!” A friend was being particularly encouraging over email as a season of riding ‘cold turkey’ was in full flow. This period of ‘punishment’ comes around every year. It’s called winter and it’s tough to deal with! So what to do before the bike can be wheeled out again? Sure, we could diversify: indulge in some poetry, reorganise the music collection or start some cookery experiments (how about some tasty pumpkin recipes?) or we can simply reminisce on the bike time we are missing with some pics and videos.

Here’s a good one…and another reason to keep a look out in the Blog for a crucial orange ‘fix’ until the seasonal air starts to warm.

Our main protagonist is a KTM RC8 R, which was the only twin at the last 8 hour endurance race at Oschersleben in Germany. It grabbed second place in the open category and the achievement was covered in the press here-and-there, but not too much especially international for what is however still an important domestic event.

The special thing about this outing was that KTM dealer Konrad Schittko (from Unna) made it happen together with people who otherwise compete in the German Superduke Cup. So the pit was filled with ‘Orange’ specialists during the event and they were labelled ‘KTM Endurance Battle Crew 53’. German technician Schittko had prepped the RC8 with all the usual Endurance-tricks:  A huge 21 litre tank plus quickfill-device, Öhlins-forks and quick-change-Brembos, a race-spec swingarm and double-headlights. The engine was prepared with superstock tuning parts from the KTM powerparts catalogue.

The team went into the race from 25th position. The start took place in the afternoon and the chequered flag come out at 22.00, in the darkness. All three riders went quickly. Usually tyre changes, fuelling and other brief maintenance was done in between 20 to 30 seconds. The team had to sort out some brake problems after the start and change a broken exhaust by midrace but still managed to finish eighteenth and second in their class (open) to grab some shiny trophies on the podium.

Endurance racing is a unique beast. You don´t find losers here. It´s always the team work that counts. Go the distance and you can feel the positive vibes. The atmosphere is special: the incredible soundtrack, the constant blurred action and speeding lights. The admirable concentration and performance of the riders is tangible and there is a feeling of goose bumps watching the racing out the track in the night with all that overtaking in tight groups.

So…what’s next? Konrad Schittko will race in some 2013 national endurance events. His riders will be the Helldobler brothers (Thomas and Stefan, who won the Superduke Battle in 2012). Keep an eye out…it is well worth a look until we can burn some fuel in our own fuel tanks.