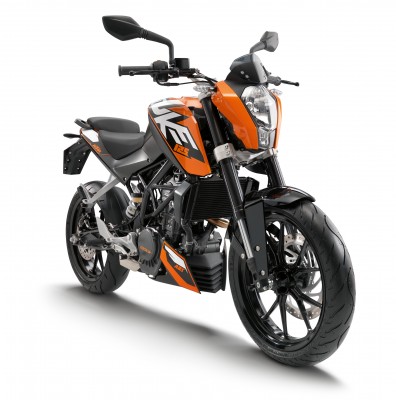 Since the introduction of the 125 DUKE, the single cylinder scene has altered and opened motorcycling possibilities for young people.

“Because it’s simply the best of what is currently out there,” so speaks Florian Alt, Red Bull MotoGP Rookies Cup winner and IDM 125cc champion. The 16-year old racer who competes next year with a Kalex-KTM in the Moto3 World Championship uses his own 125 DUKE to get to school and buzz around wherever he needs to go (as he tells us during a visit to his home in Nümbrecht in this video).

For the model year 2013, the 125 DUKE gets a cosmetic facelift, a new braking system with larger front disc and an ABS anti-lock braking unit – a world first in the 125 class! Making the bike easier to control under braking it means the rider can safely reduce speed and come to a stop even if the roads are wet and slippery. The ABS can also be disabled. Why? There are many want to use the full fun factor of the bike and get braking ‘Supermoto-style’.

The heart of the 125 DUKE means that it remains THE reference for the 125 segment. The motor is sporty thanks to a highly-torquey, 15hp four-stroke single, with fuel injection, regulated catalytic converter and six-speed transmission. Also with DOHC four-valve cylinder head, liquid cooling and balance shaft for vibration. The chassis, equipped with high quality WP suspension components and aluminium swing arm, provides stability at all angles and the seat position is comfortably upright. The upside-down fork has 43mm diameter the same way as the RC8R! The multifunction dash is also an essential component.