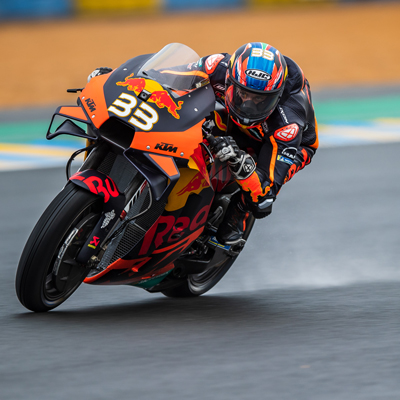 Among the many stories of the MotoGP year, Brad Binder’s rise from being more than two seconds off the pace in pre-season tests to a race winner is one of the brightest. We asked him about the adjustments he had to make to reach that incredible level…

2020 MotoGP is pinned in sixth gear towards the finale of a hectic, unpredictable and gripping season. Red Bull KTM Factory Racing rookie Brad Binder has been one of eight different winners and one of two for KTM in a milestone campaign for the factory and the KTM RC16 in only its fourth year of Grand Prix.

The 25-year old South African made the breakthrough on August 7th at the Automotodrom Brno Circuit in the Czech Republic for only his third race and followed it up with a strong 4th at the Red Bull Ring two weeks later. Since then he has endured what might be classified as a typical ‘debut’ year with mistakes and misjudgments mixed in with the promise and potential.

It has been a gratifying but steep learning curve, and Binder has made pleasing upward progress since initially appearing out of his depth during tests in Valencia and Jerez in November 2019. In those first runs with the KTM RC16 he set a best lap that was an average of 2.5 seconds away from the top of the time screens. His subsequent evolution has been staggering. Much of it was related to the way he could stop and turn the race bike. We were keen to know how he managed to excel and how he feels about it…

Go back to Valencia 2019: does it seem like a long time ago? Do you feel like a different rider?
It was a while ago! Luckily, we have made some good steps forward since then. I didn’t expect things to go as well as they did straight away. It was so tough at the beginning in the tests but I was just trying to understand the bike and I just needed to ride it. Whenever I jump on something new I always find it important to take my time and understand it. Once I know how far I can push things – and get a good feeling – then it all comes naturally. Time is the biggest thing.

In Valencia you were excited and almost overwhelmed but in Brno for the Grand Prix this summer you seemed like a MotoGP veteran. Are you surprised with how that turnaround happened?
Well, it was surprising to get a win, that’s for sure. It was fantastic but it’s true that it was an overwhelming first couple of days in Spain. You have all these electronics and options and things to watch out for. You realize how much power you have and how much speed the bikes carry. Maybe I was overthinking too much instead of just treating the RC16 like a ‘normal’ bike and getting on with the job. If I could go back to that time I’d be a bit more chilled and take it as it comes but that’s easier said than done. It was exciting!

In debriefs with the media you were using the word ‘insane’ a lot in the first months of riding and racing but that has tapered off. It seems that you have less sense of awe. Is that because of familiarity, some good results and confidence?
It’s funny how things change. At first, every time I got on the bike it was like a shock. You feel like you are flying. It is amazing how your body adapts to everything. Now when I am on the straight and I’m flat out I don’t feel crazy anymore. I don’t feel like I need to hold on super tight or do anything different compared to when I was riding my old Moto2™ bike down the straights. You get super adapted and with this championship in 2020 we’ve been riding week in week out. It becomes the norm, and I’m glad it happened because in the beginning it felt like it would never change.

You mentioned having to get used to MotoGP braking points but at what point do you lose the fear or gain enough knowledge to think: ‘I’ve mastered this now’…?
The main thing was the amount of brake you can use. When you think you are using the most then you realize that you can pull the lever even more and stop even better than you ever expected. With these carbon brakes and the way these bikes are set-up the deceleration is insane! The amount of speed that you can kill in such a short space of time is hard to really understand at the beginning. You start to realize that the limit is when the tire starts to lock. The limit isn’t just by lifting the rear [wheel], you can lift and lock the front: that’s when it is hard to find confidence. It’s something where I have made good improvements, and I feel like I am quite strong on the brakes at the moment. But I need to keep working hard. We’ve had a few ‘wake-up calls’ with the tires and managing grip and the wear. There are small things I need to learn and that’s where more experience comes in.

What are the braking habits you need for MotoGP?
You use a lot more rear brake. In Moto2 I used a ton, but at a completely different time. I never used it on the straight and pretty much only on angle, whereas here you use the rear from when you start braking until you are on the throttle already! You also use it out of corners to keep the wheelie down. There is a lot to get used to. In general, it is tough to pinpoint one thing or habit. At the end of the day it is still a motorcycle and MotoGP involves a different way of going fast.

Your mechanics mention that you love to work and to test and that’s part of being a factory rider but has that experimentation also disturbed some of your own personal progression?
For me it is not rocket science. The guys behind the scenes do all the hard work to make the bike better and I literally get on it and give my feedback. I tell them what I like and what has potential and what doesn’t. I try to keep it as simple as possible. I give the feedback and they handle the rest and I don’t feel it has stopped me in any way.

Lastly, did you create tougher conditions for yourself by making it all look so easy, so quickly?
It is not easy! That’s for sure. I don’t feel I am making it look that way. It feels like a huge effort and sometimes – like in these last few races – it feels like you don’t get much in return to be honest! I’ve had some good sessions and a couple of good races but, more than that, I’ve made too many mistakes. I need more experience. But, it’s MotoGP. It’s the pinnacle of the sport. I’m sure I’ll get there.