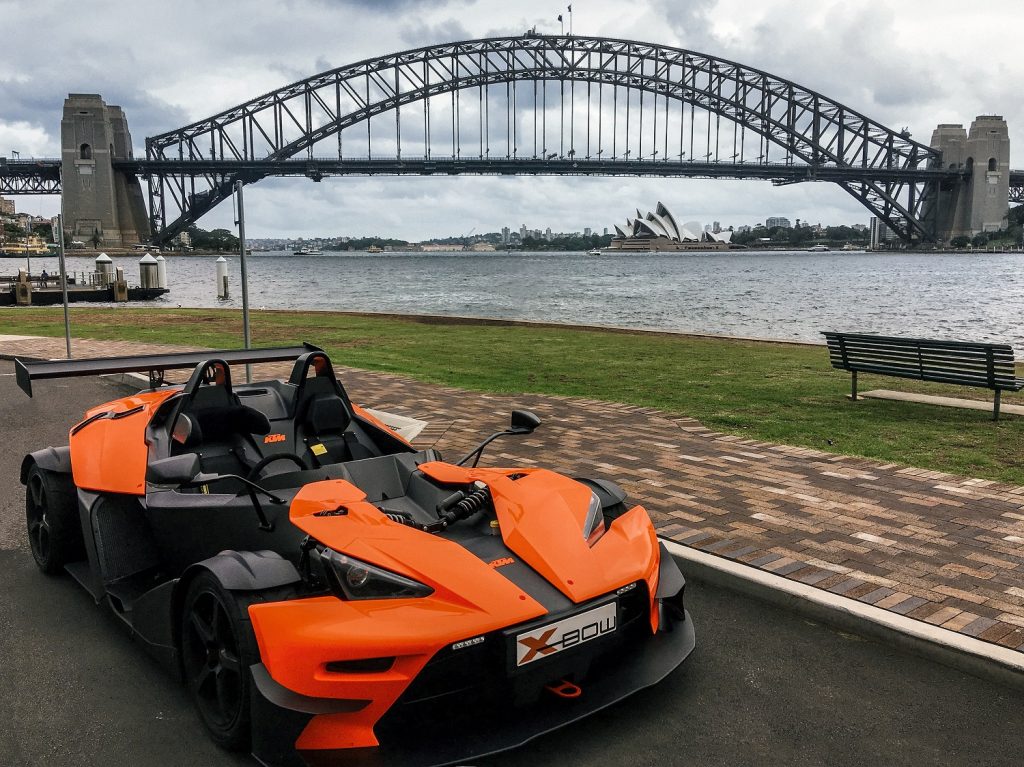 Down Under: The KTM X-BOW in Australia

There are 16,000 kilometers between Graz and Sydney, between the home of the KTM X-BOW manufacturer and the branch of the Australian import company “Simply Sports Cars” that has been officially importing the road-legal variety of the Austrian supercar since the beginning of 2017. At the same time, the Australian racing team “M-Motorsport” nearly managed to win the prestigious and legendary Bathurst 12 hour – and naturally in a KTM X-BOW GT4. 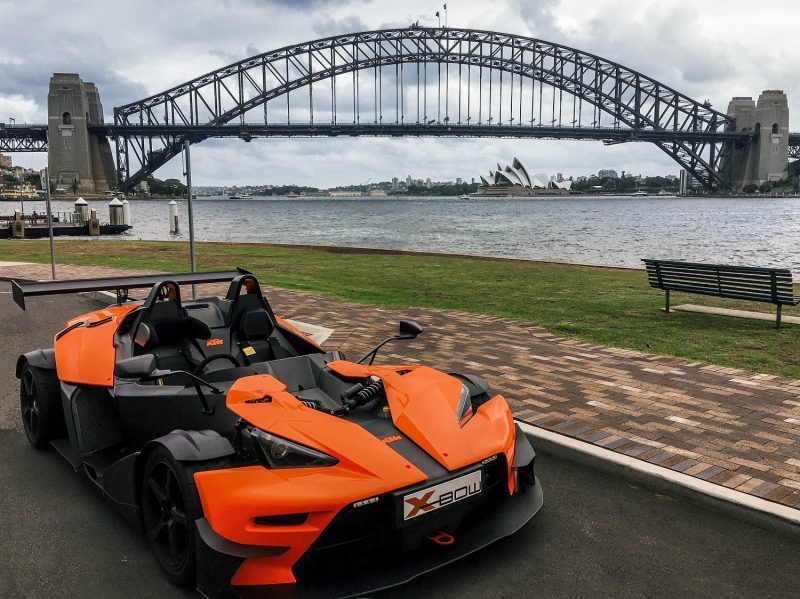 It took a long, long time for the KTM X-BOW to feel some Australian tarmac beneath its wheels. The battle with Australian authorities lasted nearly eight years until they were finally convinced that a vehicle with European small-scale homologation throughout is suitable for the market “down under” – especially since the road-legal variety of the KTM X-BOW is also available with right-hand drive.

The final successful attempt to bring the unique driving experience of the KTM X-BOW to Australian sports car fans was largely helped over the line by current importer “Simply Sports Cars” with Lee Knappet at the helm. Like many of his fellow countrymen, the Brit emigrated to Australia for work. He was a Lotus dealer for many years, before taking over as the main importer for the traditional British brand. But at the same time Knappet had been playing with a little bit on the side – the KTM X-BOW! “Right from the start I was sure that our Australian customers would love the X-BOW,” explains Knappet on his decision to invest considerable time, money and effort with the technicians at KTM Sportcar GmbH to achieve homologation in Australia. “It was a tough battle. And you really have to call it that: it was a proper battle. Every time we thought we’d met all of the conditions and provided all the necessary supporting documents, there was some kind of new problem or stipulation. We only got there in the end because my team worked so well with the guys at KTM.”

It was finally all systems go in February 2017 when the first KTM X-BOW models arrived in Australia. It didn’t take long to find buyers for them: “We hadn’t even taken the first car out of its transport packaging before it had been sold,” explains Knappet with a smile. He has been cautiously but constantly developing the trade in this Austrian supercar ever since. “Two of our sales partners, – including those in Melbourne – are on board, and the interest is mounting. Nothing impresses people more than when we race the cars at the many track days here in Australia. Throw on some semi-slicks and stick a good driver at the wheel and there’s usually no competition. Even people who were skeptical at the beginning are won over by its performance.” Ten to fifteen new cars a year is the target set out by Knappet and the “Simply Sports Cars” team; a figure that they very nearly managed already in the first year. And no wonder – the Australians are a nation of sports car enthusiasts, as demonstrated by their unshakeable love of the V8-powered Holden Commodore and the Ford Falcon. It’s no surprise that Lee Knappet only has one problem to report when it comes to the Australians and the KTM X-BOW: “People are somewhat skeptical at the beginning when they hear that the KTM X-BOW only has a two-liter four-cylinder engine.” It’s all relative though: “In 99 percent of cases, they will have stopped thinking about that after the first test drive …”

The organizers of the prestigious Bathurst 12 hour were thinking quite differently just at the time when the first KTM X-BOWs were arriving at “Simply Sports Cars”. Under the colors of M-Motorsport, the first KTM X-BOW GT4 racing team appeared in February 2017 at the traditional event at “Mount Panorama” – the legendary Australian race track – looking to succeed in the GT4 class endurance race. Additional weight, limited tank volume, ride height – everything seemed to be designed to slow the KTM car down. For a long time, it still looked as though the four-person crew, consisting of KTM factory driver Reinhard Kofler, engineering factory driver Tomas Enge, as well as Australians Glen Wood and Justin McMillan (the final driver and team leader) might somehow win. After an outstanding pole position in training, the team had a two-lap advantage when, two hours before the finish line, grass accumulated in the diffusor, a fire began, and a brake line melted. Despite the unfortunate ending, the KTM X-BOW GT4 had successfully proved its sensational performance. It signaled the definitive arrival of the Austrian sports car on its fifth continent. 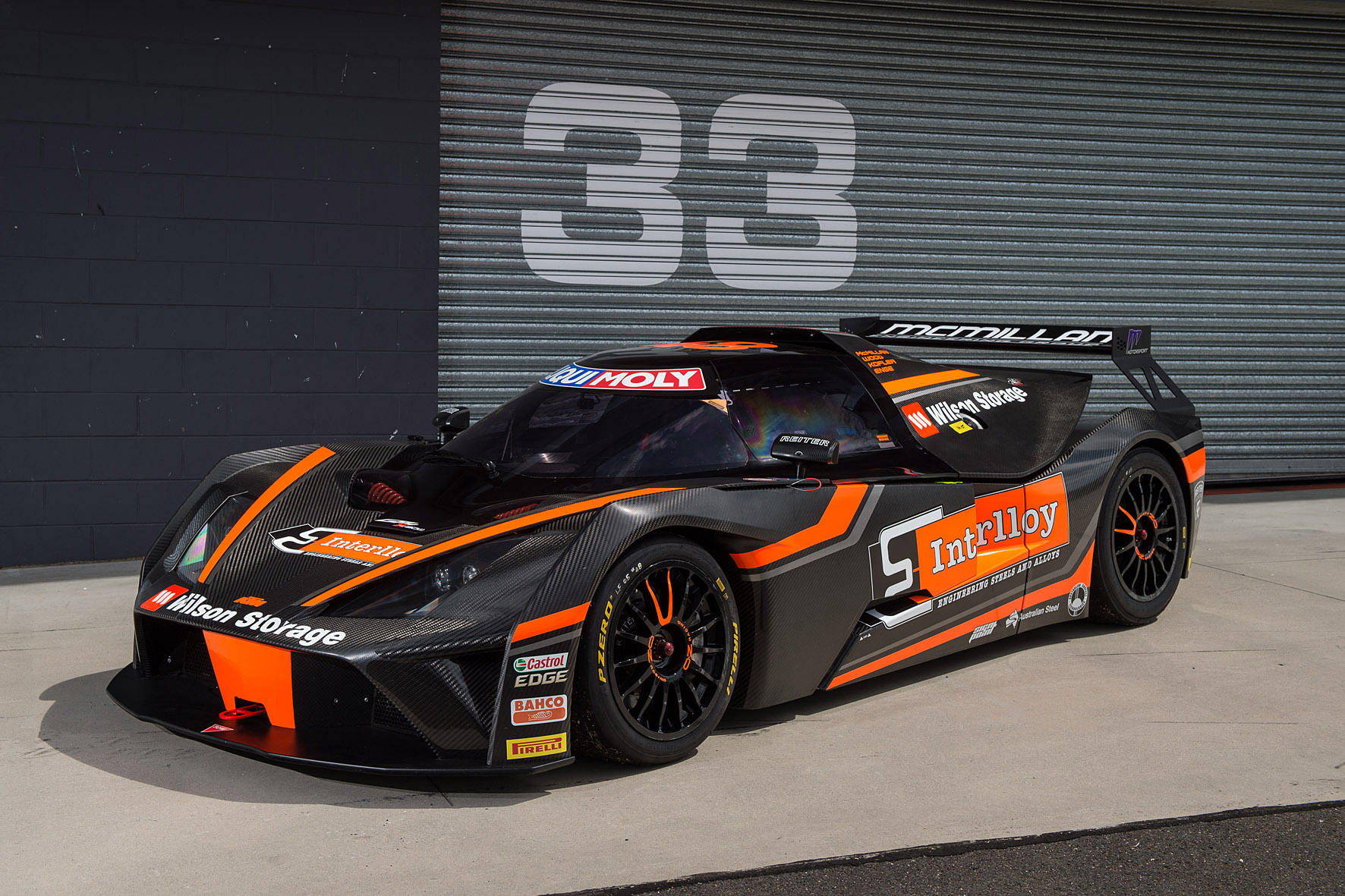 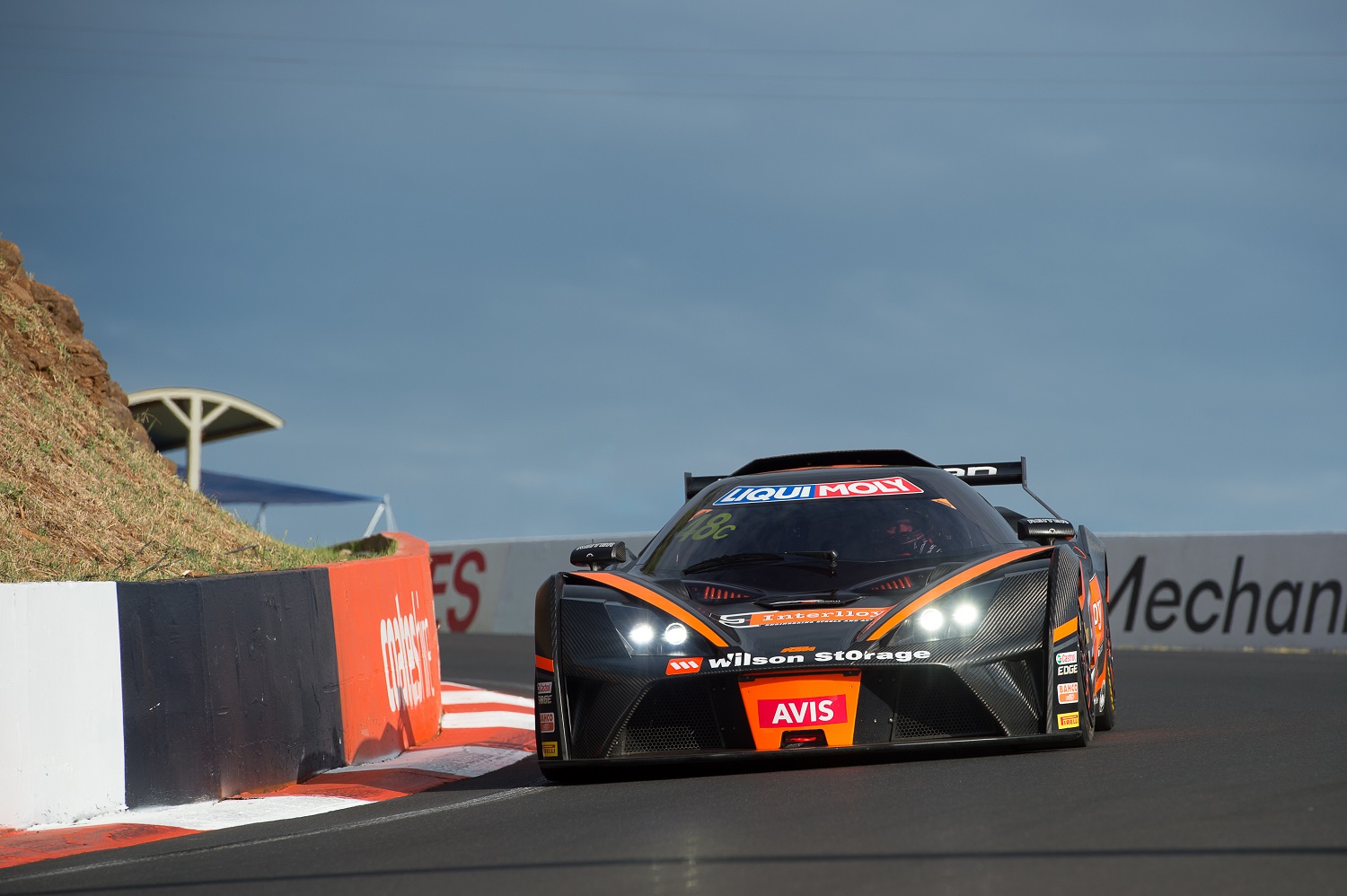 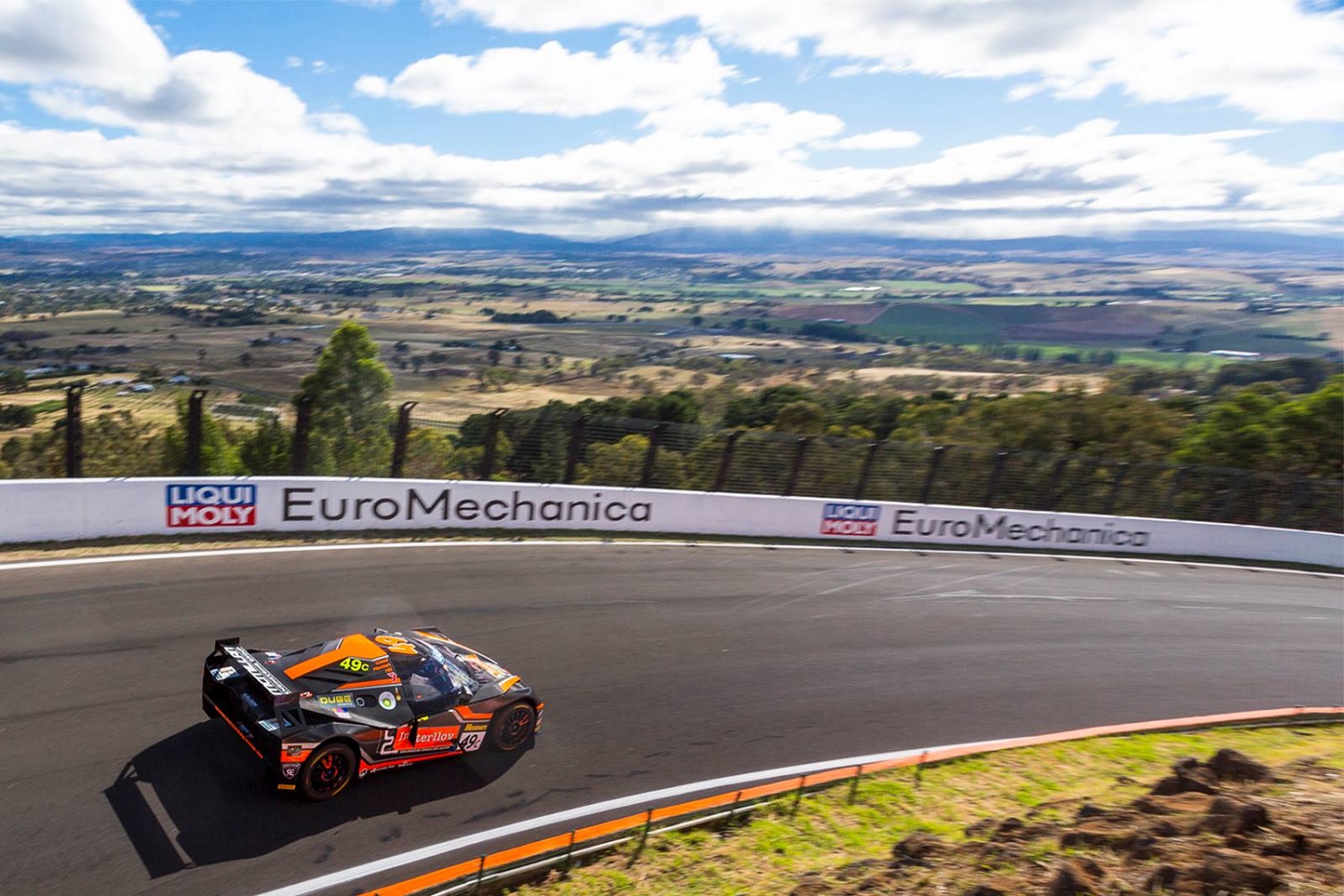 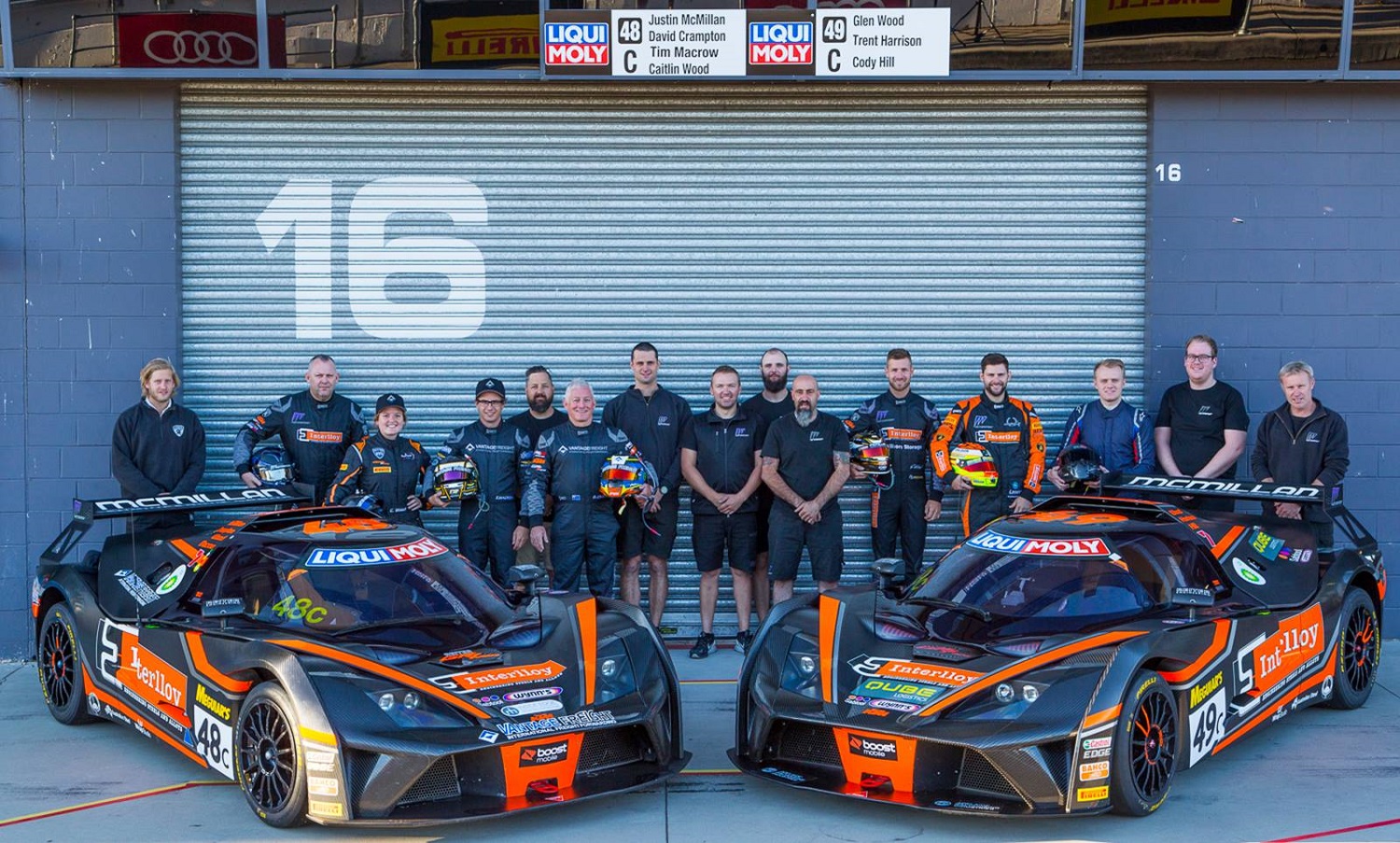 3 Responses to Down Under: The KTM X-BOW in Australia