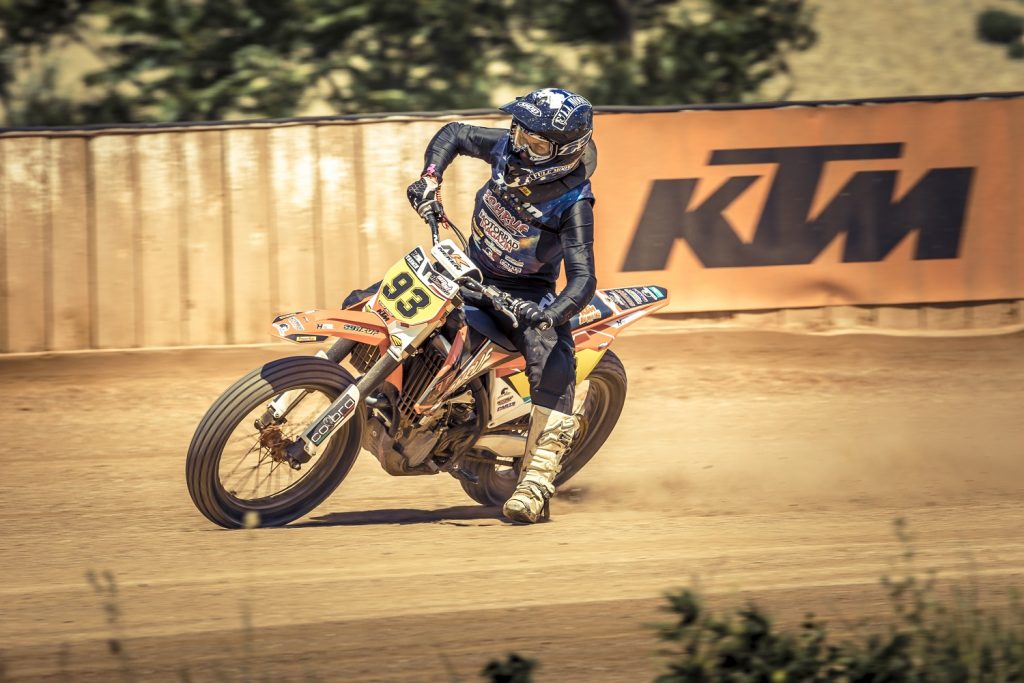 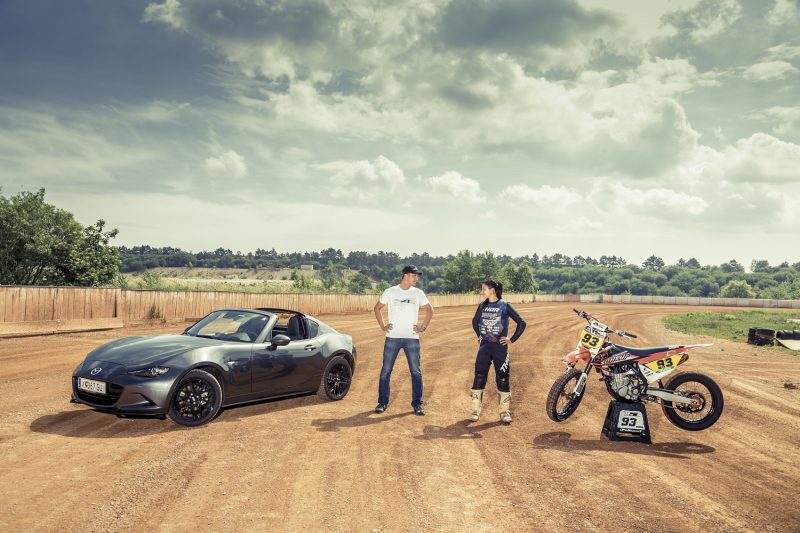 Dirt track racing is booming, and not just in the USA, where the spectacular flat track races in the oval are as popular as a juicy burger with onion rings. The rest of the world is also slowly becoming aware of how exciting, action-packed and enjoyable to watch this sport is. Not only that, everyone gets to take home a free souvenir: a layer of dust on their clothes and hats: all part and parcel of getting up close and personal with the world of motorsport.

The Austrian star of the flat track in recent years is more than just a pretty face: Yasmin Poppenreiter, 24, is not only taking part in her fifth season of flat track racing, she also has a number of wins to show for it. Last year she won the Austrian Motorsport Federation (AMF) trophy. As there is no official national championship, this trophy is considered the unofficial title. It’s worth mentioning Yasmin does not compete in a women’s class, but instead against men, who get just as lost in her trail of dust as the spectators.

Yasmin, who has been a part of the Motorrad Magazine Racing Team since last year, has already got to the top ten in the world championships. That meant it was time for a new challenge, which Motorrad Magazine provided by organizing this head-to-head. “What do you think about competing against a car in a flat track competition?” we asked her. “Any time,” she responded, full of enthusiasm as through as though her sights were already trained on the apex of the corner.

What we didn’t tell her was the name of her opponent: 33-year old Austrian Andi Aigner. If anyone knows how to drift without any unnecessary seconds off the clock, it’s him. Andi, who hails from Styria in southern Austria, gained his first rally world championship title in the near-standard class ten years ago, with race wins in Argentina, Greece and Turkey: none of which are known for their lack of dust! 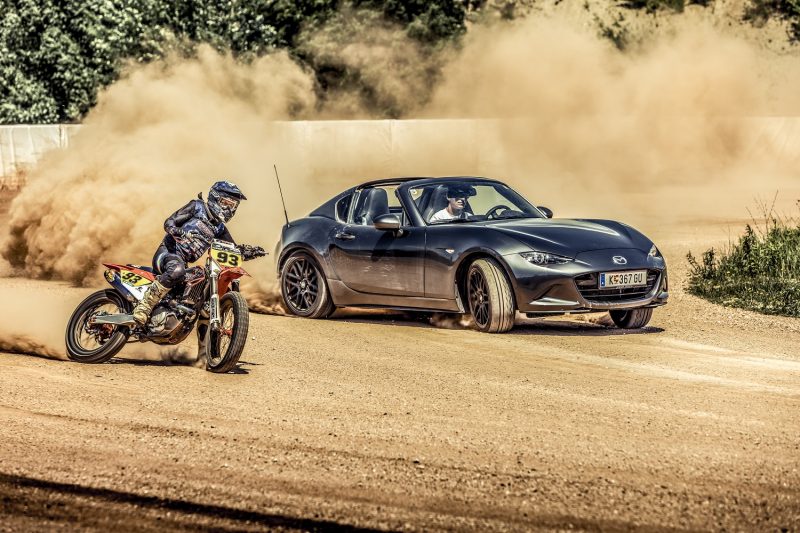 We chose a Mazda MX-5 RF as Andi’s racing vehicle for a number of reasons, most importantly so that we could create as much of a level playing field as possible. It had to be rear-wheel drive and the MX-5 is not exactly a monster, even in its most powerful configuration with 160 HP, but its excellent balance, sporty straightforwardness and above all its low weight at just 1130 kilos combine to make an exciting package. The only concession: at the request of the rally champion we fitted winter tires for better traction on the gravel.

Yasmin’s racing machine was also near-standard. Based on a KTM 450 SX-F, the chassis was shortened, and the handlebars raised. 19-inch wheels with special dirt track tires were also fitted to the bike. Oh yes, one more thing: the front brakes are removed for dirt track racing. No need for brakes when you’re thundering towards a corner on a 68 HP, 100 kilo READY TO RACE machine at 160 kilometers an hour. This is not for the faint-hearted. 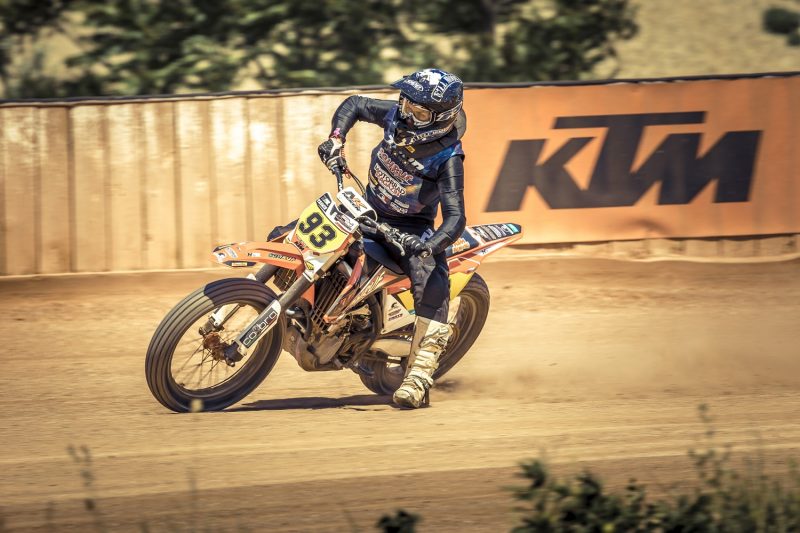 The showdown drew closer. We found ourselves at the Speedway Arena Eggendorf, run by the ÖAMTC-Zweigverein Wiener Neustadt, an affiliated society of the Austrian car, motorcycle and touring club (ÖAMTC). The 300 meter long track regularly hosts races with training runs every Saturday! The conditions were perfect, the sky was blue, the sun was out.

Excitement was shining as brightly as the sun in Yasmin’s eyes. But Andi and the Mazda MX-5 RF got to go first. They took it in turns to race, as the stones kicked up by Yasmin’s rear wheel would damage the Mazda’s pristine paintwork. Andi was allowed to do three laps, then another three (flying) laps against the clock.

Even just the first few corners were breathtaking – Andi saw precisely the line he needed to take, stones flying out behind him as he hurtled round the track in the Mazda MX-5. Yasmin seemed skeptical. Then the lap times came in. There was a difference of only 40 hundredths of a second between the laps, the best time being 17.69 seconds.

The former world champion summarized the experience: “The Mazda really surprised me, it drove much better than I expected, with much more traction. I had excellent drift control as the conditions were ideal for how the MX-5 handles. The precise, direct steering also helped a lot. And as for the power– it was more than sufficient, you wouldn’t be able to use more here anyway.” 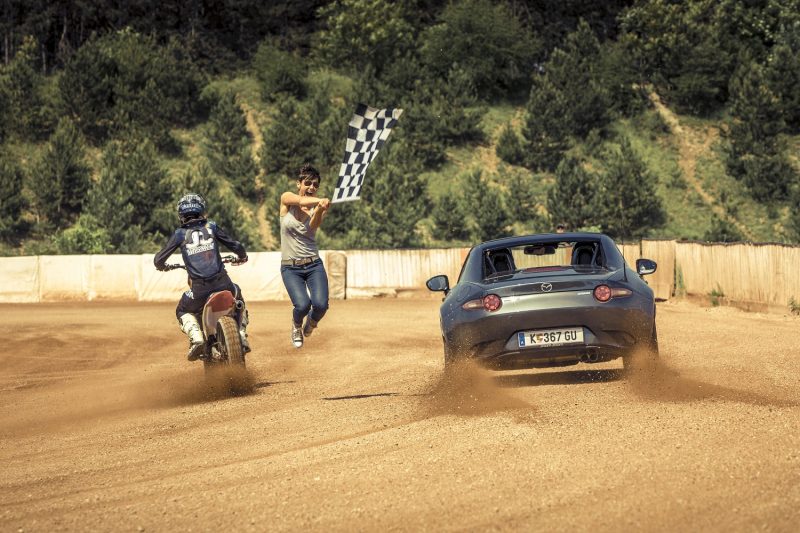 Now it was Yasmin’s turn. The KTM single roared into life, then sank its teeth into the oval. Anyone standing too close to the track at the exit of the bend would have well-advised to put a helmet on too – that’s how far the gravel was flying as Yasmin twisted the throttle. Just watching was enough to take your breath away, especially when she slid into the bends, pushing herself and the bike to the limit.

But, the only thing that mattered here was time: Yasmin also clocked fairly constant times, but her best time – 19.24 – was still a good way behind Andi in the Mazda. “The track is too dry,” claimed Yasmin, equally as drily.

Second attempt. Hanson Schruf quickly dispatched the sprinkler vehicle for a turn round the course to dampen the track, that up to then bore close comparison with the Atacama Desert. 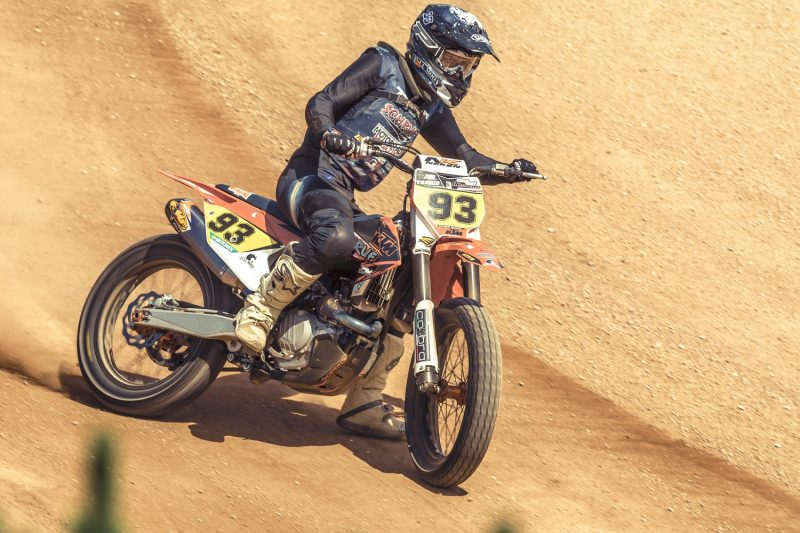 So, the process started over, with Andi going first again. He posted very similar times, as there was not that much room for improvement to begin with. It was a different story for Yasmin, however. She easily turned the better adhesion on the track into faster times – and ultimately clocked a phenomenal lap of 17.92 seconds. A mere 23 hundredths of a second behind Andi Aigner in the Mazda MX-5. Merely the blink of an eye.

With a twinkle in his eye, Andi celebrated his win in this unusual head-to-head: “I’ve taken part in a couple of head-to-heads between cars and bikes – this is the first that I’ve won on four wheels,” the event manager and freelance ÖAMTC driving instructor grinned.

“It was close,” laughed Yasmin. “We’ll take the front brakes out of the Mazda next time to make sure it’s really an even contest. Then we’ll see who’s faster!”