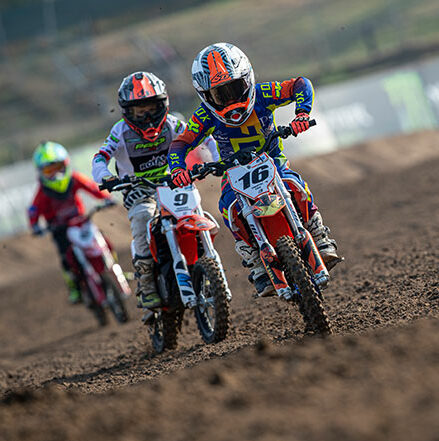 Electrifying history made at this year’s Motocross of Nations: A look at future talent and technology

The Motocross of Nations is the most prestigious event on the motocross calendar – it’s the Olympics of the sport let’s say, where the best of the best take part. Regular rivals become teammates to compete for their nations and they battle it out with pride for their country and the coveted Chamberlain Trophy.

The event is in its 74th year, but the 2021 edition in Mantova, Italy had something extra on the agenda, with a new and futuristic junior class. An unforgettable experience; in front of the eyes of the world’s motocross community, young riders aboard innovative electric technology were part of the launch of the European Junior e-Motocross series, which kicked off as part of the Motocross of Nations event.

Whether you’re a 2-stroke or 4-stroke fan, and prefer two wheels or four, there’s one thing that’s clear – electrically powered vehicles are part of the future, and even part of the now. And that’s why the KTM SX-E 5 is the first race-focussed electrically powered motocrosser in the motocross line-up, designed to encourage young racers  in the infancy of their ‘career’. It’s part of an overall vision for KTM with its years of dedication to development of e-mobility products and platforms with its dedicated facilities to the technology at the KTM Factory in Austria.

Innovation combined with KTM’s long-standing commitment to develop young talent has been exciting proposition. That concept got a little more distinguished recently, as young riders from over 10 nations lined up to ride the MXON track – yes that huge sandy track with jumps as big as houses that the pros ripped around the decipher this year’s winning nation – with the launch of the European Junior e-Motocross series. It was a big and exciting first. A first ever pan-European motocross series with electric motocross bikes. And boy, there was some buzz about it.

The fully adaptable KTM SX-E 5 with its six riding modes is a capable bike. With laptimes comparable to the formidable KTM 50 SX, the advantage of this little ripper is that you can begin with its mode at slower than walking pace in its lowest setting and allow the rider to progress throughout its power capabilities. It also has an adjustable chassis, meaning youngsters can literally grow with the bike – it’s a concept that surely will save parents money in the long run, and with its low maintenance, it’s also great for new entrants to the sport and it surely has to be considered as an ideal solution for many youngsters, especially with its low noise output. The kids seem to love the tech too, after all, it may be all they will ever known.

While there may be hesitation in some markets and by consumers to accept or understand how the future looks with electric mobility in the sporting horizon, 36 young riders have totally embraced the concept by signing up to the new European series (which is open for three brands of bikes in its first two years). And they were fast. Tours of the Red Bull KTM Factory Racing set-up, a meet and greet with the legendary Tony Cairoli (who incidentally went on to take team Italy to Motocross of Nations victory with fellow Red Bull KTM racer Mattia Guadagnini and Alessandro Lupino), a track walk with Rene Hofer and Guadagnini and much more was just the tip of the iceberg when it came to the ultimate excitement.

Imagine it. A primary school aged kid, lining up to ride around the Motocross of Nations track in front of an Italian crowd having met their heroes. Mind boggling. And they absolutely ripped….. their progress through the sessions was apparent, and the rain that fell before their final session did not to deter them. One of those revelling in the experience was the son of stunt and freestyle legend Robbie Maddison. His son Jagger is a huge fan of the KTM SX-E 5, and was excited to take part in the event. Representing the USA, Jagger is more used to the dry dirt of California, but his steep learning curve in the Mantova sand with the electrically powered e-mini was obvious, as were the friends he made hanging out at the series’ basecamp in the paddock.

The proud eyes of parents gazed across the sandy Mantova circuit, cheering on their loved ones as the juniors made history zipping around and showing their skills in perhaps the biggest educational event of their life. But it doesn’t stop there. Following the MXON, riders are competing over a further four rounds held at Motocross World Championship events with the second outing taking place at the Teutschenthal, Germany recently, followed by the France and Spain Grand Prix (double-header) over the next few weekends for a more competitive environment having enjoyed the initiation kick-off where the juniors could learn what it’s like to ride on a pro track

We have witnessed a revolution. A shift in the concept of the sport. And we may have also seen a future world champion at his or her first major event. Aspirational, yes and educational, definitely yes. We look forward to how the series will progress within the MXGP framework – and the technology it encompasses – in the coming weeks, months and years. One thing that will never be forgotten, is the smiles on the faces of those youngsters and the lifetime impression the series’ kick-off will have on them forever.

10 Responses to Electrifying history made at this year’s Motocross of Nations: A look at future talent and technology