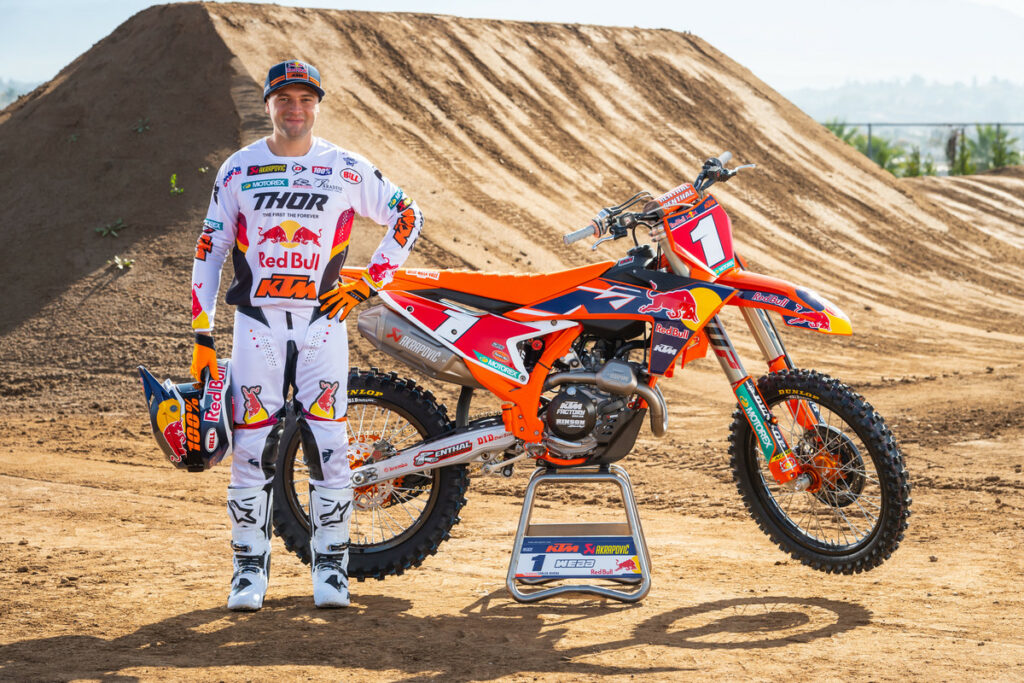 For the second time in three years Red Bull KTM’s Cooper Webb goes into an AMA Supercross season with the #1 plate and eying more glory on the vast ‘indoor’ stage. 2022 could be the 26-year-old’s most testing campaign to-date. Why? We asked him to explain…

In 2019 Cooper Webb drafted into the Red Bull KTM team and slipped comfortably into the retiring Ryan Dungey’s shoes. The athlete from North Carolina blended immediately with the KTM 450 SX-F FACTORY EDITION and Ian Harrison’s crew and lifted the coveted 450SX championship at his first attempt. Webb backed-up that achievement with a second crown in 2021 as the pandemic still chipped away at the shape and look of the immensely popular American contest.

For 2022 Supercross is looking a little more ‘normal’. The series is slated to visit California for the first time since 2019 and the breadth of the calendar takes in 17 different events in 19 weeks with the first 12 on consecutive Saturdays from January 8th and from Anaheim to Seattle.

For Webb though the surroundings of his fourth term with KTM have altered. He is no longer working with trainer Aldon Baker, he is riding and practicing at a different facility in Florida, he has the merits of the brand new KTM 450 SX-F FACTORY EDITION to discover when the gate drops, and he has a new teammate in the form of long-term friend Aaron Plessinger.

On the eve of the opener at Anaheim and during this winter of ‘shake-up’ we tracked Cooper for a swift FaceTime Audio chat to evaluate the shape of his outlook for 2022. “For me change is always good,” he tells us from his car on the way to the practice track. “I’m someone that is always anxious to improve and, although I’ve had some success in the last couple of years, the sport is always moving on in some way. I think you have to look at how you can push the bar and the limit. As a racer I know my ability and I believe in my ability, and I want to give the best of myself every time I’m out there. We’ve made some changes this year…but I think it will only have a benefit.”

I’m with Michael Byrne; that’s the plan for this year. I’ve worked with guys through my career and that’s helped me get some experience. Michael was my riding coach and Aldon was my trainer last year and we had a lot of success. I wanted to see if I could be a bit more successful than I have been so far.

At 26 you must know what you need – physically and mentally – to go racing?

Yeah, you gain experience all the time. Anyone who knows me will tell you that this move was not about a lack of motivation, by any means. I just wanted to change what I am doing, and I feel I still have a lot of years left in me in win championships. Outdoors is something I want to put a bigger emphasis on in the future and my last three motocross seasons have not been great, being completely honest. In Supercross I think I can be considered a contender and I plan to go for my third championship this year. Overall, the change has been really good for me. Physically I feel great and I am riding better than ever. I’m in a really good head-space for the new season.

The new KTM 450 SX-F FACTORY EDITION: you’ll be asked this question a lot but what do you like about it? How’s it different to the previous version that already won so much…?

It was quite a secret! It was tough to keep it under wraps. I rode it for the first time a couple of years ago and then got on the current model in mid-October. We were trying to test and ride without being seen because it wasn’t going to be unveiled until mid-December. I was able to be in California and develop the bike with the team, one-on-one. With it being brand-spanking new there isn’t even a handful of parts that we can use from last year’s model. It was good for us to learn it together and for me to directly say what I liked and what I didn’t. There was already a really good base thanks to the test riders, and I was able to fine-tune it on the supercross track. The biggest thing is that it’s just so rideable. So easy. It does everything really well and it is a huge step in the right direction for a part of the track like the whoops. It turns amazingly. I’m a shorter guy and it just seems to fit my style a bit more and it means I can ride it more to its potential.

Another new aspect is Aaron’s presence in the team. How will that have an influence?

It’s great! We’re really good friends and have been since we were kids. He’s a bit like me: I like a laidback atmosphere and we joke around and have fun but when the helmet comes on it’s ‘go time’. We were teammates and training partners in the past and we get along really well. We have the same friends. I think it will be a fun season. When you are on the road with 17 supercrosses and 12 motocrosses then it can get monotonous, so having someone alongside you going through the same routines and schedules as well as the same joys and pains of race day will make it a bit more enjoyable.

2022 supercross should involve more variety compared to the last two championships affected by the pandemic. That has to be another positive for the coming season…

I’m super-excited that we are getting more ‘back to normal’. With everything going on it was great to be able to race the last two years – despite the schedules we had – but I think the more traditional 17 rounds in 17 different venues is what supercross is all about. Learning new tracks in different stadiums with different soil and travelling to different cities is something I’ve always enjoyed. It’s good to have variety again. We’ll have baseball stadiums, football stadiums and the dirt changes every weekend. The fans should be at full capacity again and being back at Anaheim; it was really weird not racing there at all last year.

Behind-the-scenes documentaries seems to be a popular trend at the moment for pulling new fans into the characters and stories of sports: would you be keen to see or to take part in something similar for supercross?

Oh, absolutely. I know Red Bull are pushing a lot right now with their Moto Spy series and it’s a pretty in-depth behind-the-scenes look…and I think this is what people are drawn to and what they want to see. The racing [SX & MX], in my opinion, is the most exciting form of motorsport but the fans and people don’t really get to see much more of what goes into it: the teams, the preparation. There is so much that contributes to that race that’s televised. There are many ‘moving parts’. I’d love to be part of a [media] movement like that, and hopefully supercross can get to a level where it attracts a big platform like Amazon or an equivalent.

You mentioned motivation a minute ago. In 2021 you backed up your 2019 title, so what keeps you going? What makes you want to push for more?

I’m in a good spot. I know what gets me going and what drives me. I believe it’s just that competitive nature of wanting to win. There is no feeling that can replace that. Ever. Then you have that quest to always be the best version of yourself and ask questions about limits. Racing allows me to do that. One thing that makes me tick is when I get doubted or questioned or people tell me I cannot do something: it fires me up to prove them wrong but also demonstrate to myself that I can do it. It does sound a bit crazy I suppose – winning and then immediately looking for the thing to keep you going – but I’m in a good place for my goals and ambitions for the future. I’ve never wanted to win more than I do now.