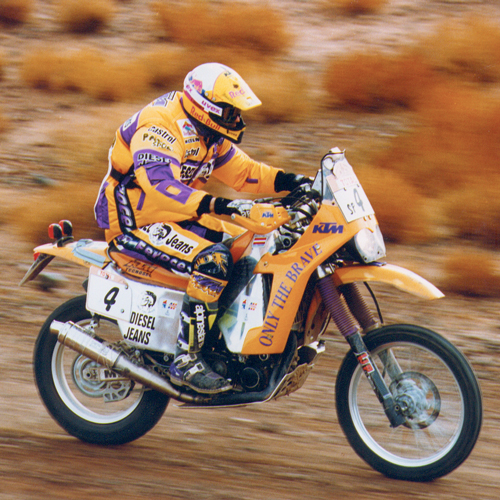 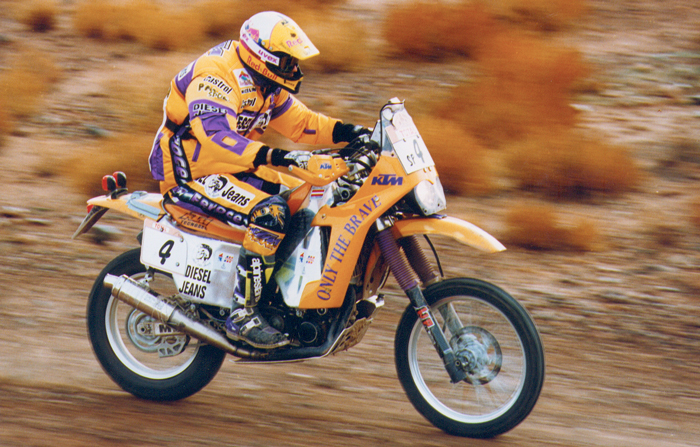 On a very rainy, wet day at the Motocross of Nations, we caught up with Kini (who was there supporting KTM’s racers and the Austrian team) to talk dirt biking, rally riding and to explain about a special opportunity for KTM Adventure riders at the Oasis Rally.

“First of all, I have a passion for motorcycles in general, motorsport in general, but still for me motocross is my real sport.” Kini began.

“Rally and enduro are all part of the adventure. It’s something you can do for the rest of your life because motocross can be limited on a high level (when it comes to the body). I started doing the long-distance rallies in the beginning of the 90s – I did a championship in Spain, and later on I started doing some smaller rallies in Northern Africa.” “When I was doing the Motocross World Championship these guys doing enduro or rally, they were seen as the ones who couldn’t really do motocross. For us it wasn’t interesting (laughs), but then if you have been once in Northern Africa in the Sahara Desert, it’s difficult to explain to somebody who has never been there how amazing it is. Especially to someone like me; a Tirolian who is used to high mountains and small valleys, the endless desert where you can go as far as you have fuel to take you is just immense. If you’ve done it once, you’ll always want to go back,” said Kinigadner.

Kini won two world motocross titles in the 1980’s and took part in his first Dakar, which took a route from Paris, France to Cape Town, South Africa, in 1992. The Austrian racer completed around six days of the near two-week long race, when unfortunately his bike broke – “it wasn’t a KTM,” Kini laughs when recalling the experience. Despite his previous concept of what rally racing was all about, Kinigadner soon realized that the media attention for the Dakar was not comparable to motocross, as the global interest was simply huge – people wanted to know about the areas traveled, they wanted to see the incredible images that were received from these races and that’s when Kini began pushing for KTM to go to the big rallies. He knew it would bring a lot of global exposure. Kini explained that over the years rally has changed a lot – but the interest remains. Now the sporting side of Dakar is really competitive – with riders racing down to the minutes. It’s taken seriously, the athletes are on a high level, although with the incredible locations the world continues to watch and marvel at what is reported from these extraordinary events. 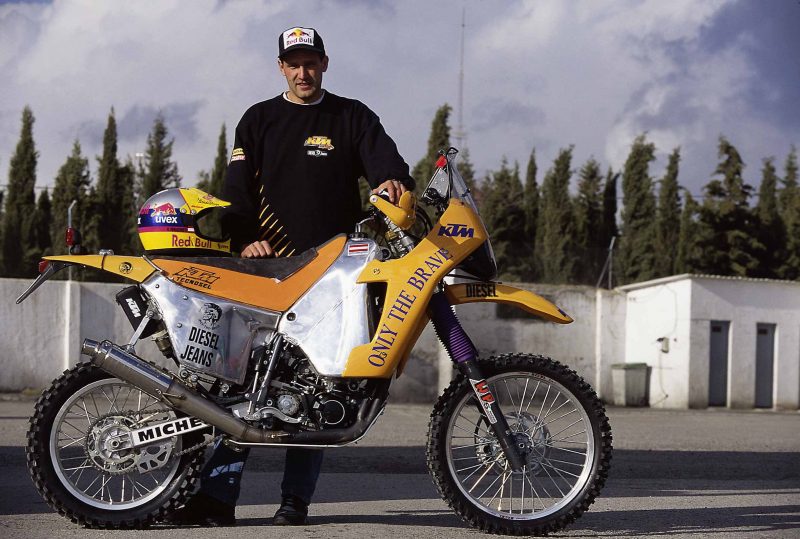 “In 1994 I prepared the first KTM team for Dakar. It was a real, real adventure. Now, the Dakar is much more a racing sport than in my time – when I raced we had no GPS, it was incredibly difficult to navigate. We had to start in Libya and I had to start first because I won the prologue. There was 100km where the roadbook said follow compass direction 180 and then you will find a few trees in the middle of the desert. I arrived there and I found no trees. The problem was when you opened the throttle on the bike the compass was turning around and being a few km left or right was quite easy. Then I started to search for the right place and I easily covered 20km more – I knew I would run out of fuel if I didn’t find the correct place soon. It was completely different compared to today; they are really fighting for the seconds and minutes. Whereas before gaining or losing an hour in a day was normal,” explained Kinigadner. 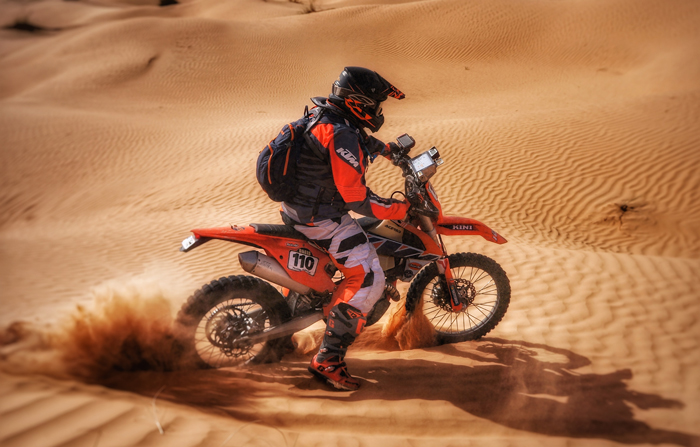 “Today riding and driving in normal life and racing has become more and more driven by electronics, in fact maybe one day there is more autonomous riding, but I believe there is still a lot of room for adventure. I believe the wish of the human is for us to want to do something by ourselves and it won’t change when it comes to going on an adventure. In fact, we have known this for a long time and in the middle of the 90’s we began a rally in Northern Africa – the Oasis rally, which is a rally for beginners,” said Kinigadner

“It doesn’t matter how fit you are, it doesn’t matter if it’s your first rally, or your first time in Africa – we try to make it so that everyone has fun there. It makes rally riding accessible, so KTM customers get to feel the experience of rally. The difference to other rally events is that if you’re not fit enough to ride every day, then you can ride every second day. We are there with spare parts, we usually have a KTM Factory racer with us talking about their experiences, we have medical cover and we have trackers there so we can ensure everyone’s safety. It’s a great opportunity for those with Adventure bikes to ride in a rally situation, but still with a comfortable safety net around them.” 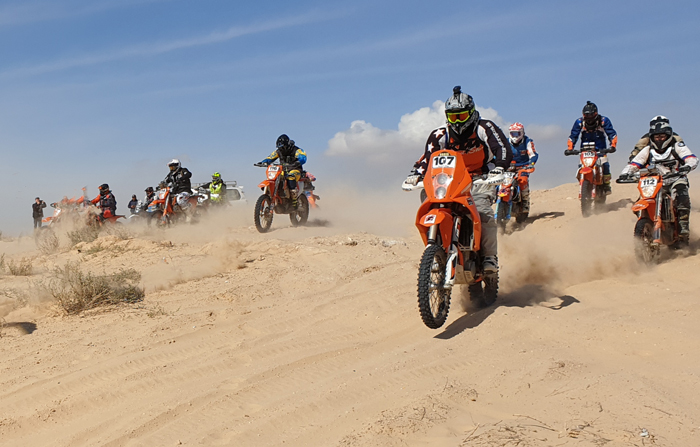 Kinigadner explains that the idea is for KTM customers can bring their bike – such as a KTM EXC or one of the new KTM 790 Adventure R – to take part in this exceptional experience. They can bring their bike to Kinigadner’s dealership in Tyrol, Austria, and everything is handled from there (some European dealers are willing to organize bike shipment, and support is available from the organizers for groups to ship their bikes together to Tyrol). The bikes are then transported to the Island of Djerba, Tunisia and the riders are fully accommodated from arrival – staying in the desert, in comfortable hotels where everything is included. 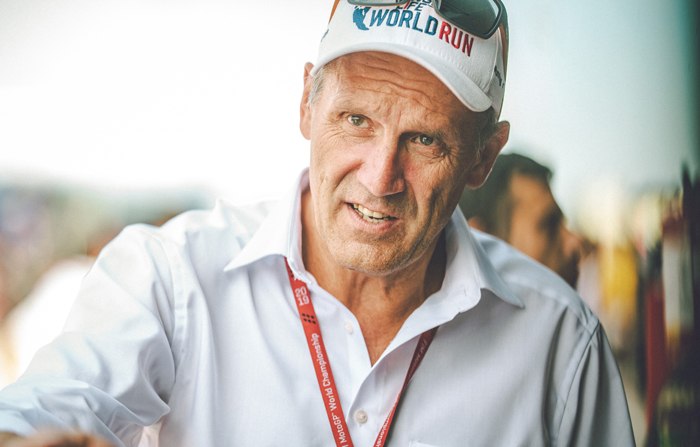 “Where we are based you can go 1500km and that’s just in the desert. However, if you’d prefer to stay within viewing distance of the hotel, then you can go and play for hours in the dunes. It’s very adaptable to a rider’s experience – if you have a technical problem, or an issue, then in 20 minutes you can walk back to the hotel. Each day we create a roadbook – it’s around 150km per day and we’ve spent a lot of time creating something that people will enjoy. If somebody doesn’t want to do the roadbook, they don’t have to do it. We have an opening up vehicle and a following vehicle each day – so a rider can follow the group with the follow-up vehicle and we also plan some exits from the route so if they’ve had enough, they can head back to the hotel. It’s about enjoying the experience and doing as much or as little as you like,” said Kini. 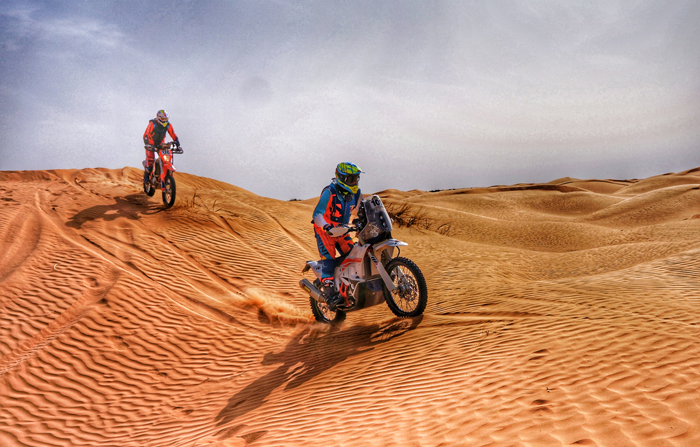 “At the next OASIS Rally we’ll also run a twin-cylinder guided tour. In Tunisia there’s a lot of interesting places like where they filmed Star Wars and we will visit them on the guided tour. They have more distance to travel than the other group, maybe around 160km, but there are some asphalt roads included as well. We try to combine the groups as much as possible – single cylinders are using the roadbook and the others are guided. They will see some incredible things, and they can truly enjoy their KTM Adventure bikes in the perfect surroundings for the bike.”