Finding orange in The Bike Shed

Eating, working, meeting, shopping, watching, admiring and even getting a haircut: it is all possible in an environment of total biker cool at The Bike Shed in London. The venue is unlike anything we’ve seen, and among the custom jobs and motorcycle regalia there is a little bit of orange … 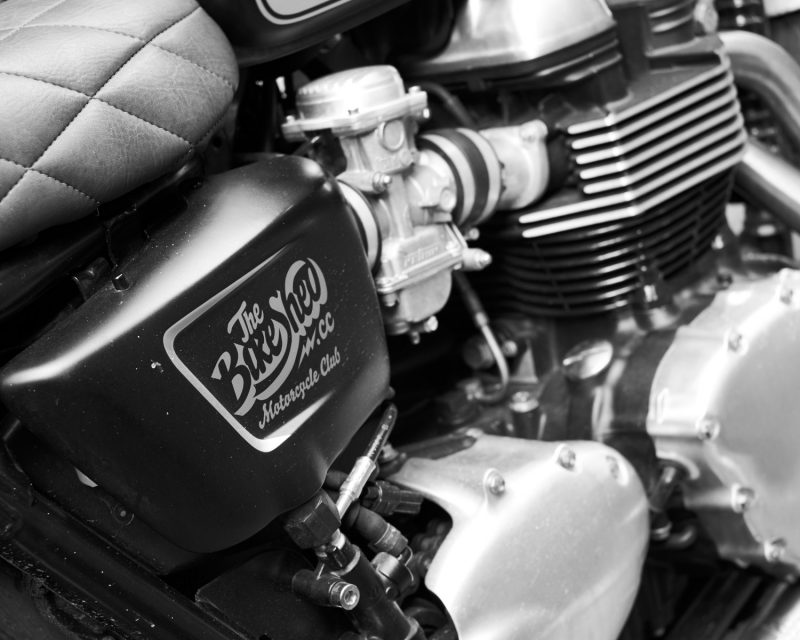 Deep in the deeply fashionable and trendy zone of Shoreditch in central London there is an unmissable stop for anybody even vaguely interested in motorcycles. The Bike Shed has been open for over a year and was born from a Blog and series of annual shows/exhibitions run by Anthony ‘Dutch’ Van Someren and his wife Vikki. The actual site of the accessible Members Club encompasses a well-reviewed restaurant, exhibition and event space, a shop stacked with current ‘hot’ brands like Roland Sands, Deus, Bell and their own range of clothing, a lounge and even a barber shop.

Just walking past the gates to the venue sees a wide range of bikes from commuter to Bonneville to adventure-tourer, and passing through the doors reveals a spotless and atmospheric interior with equally pristine specials dotted around the floors. The Bike Shed is a little overwhelming at first. It is hard to know where to look … and you wished you’d roll up on your wheels.

The Bike Shed Motorcycle Club is of course a ‘club’ and it also seems like a place where any fan of bikes – from retro classics to sportbike MotoGP obsessives (they screen the races at the weekend) – can feel at home; it was surprising to grasp that sensation from a situ that people could think is a bit ‘exclusive’. 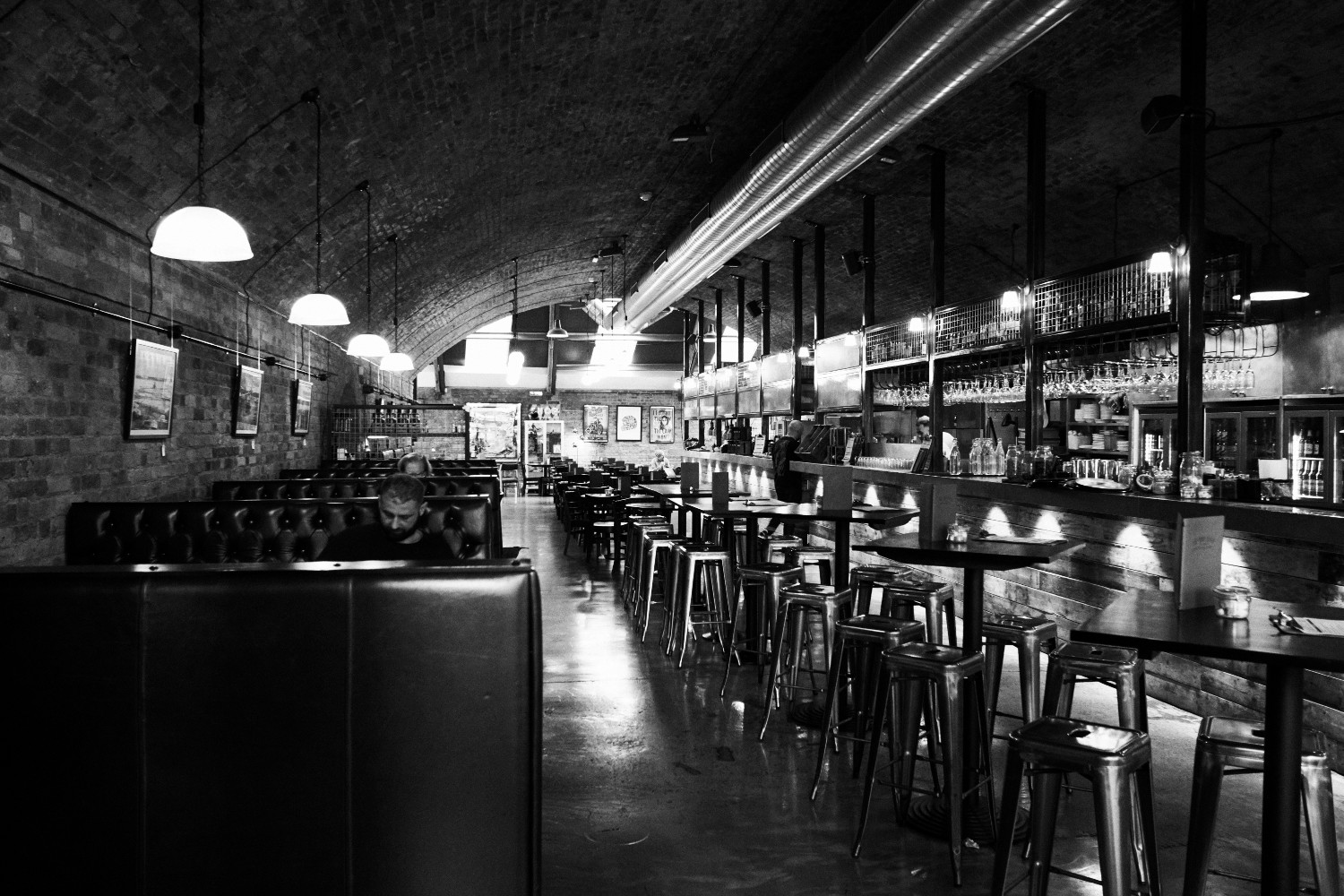 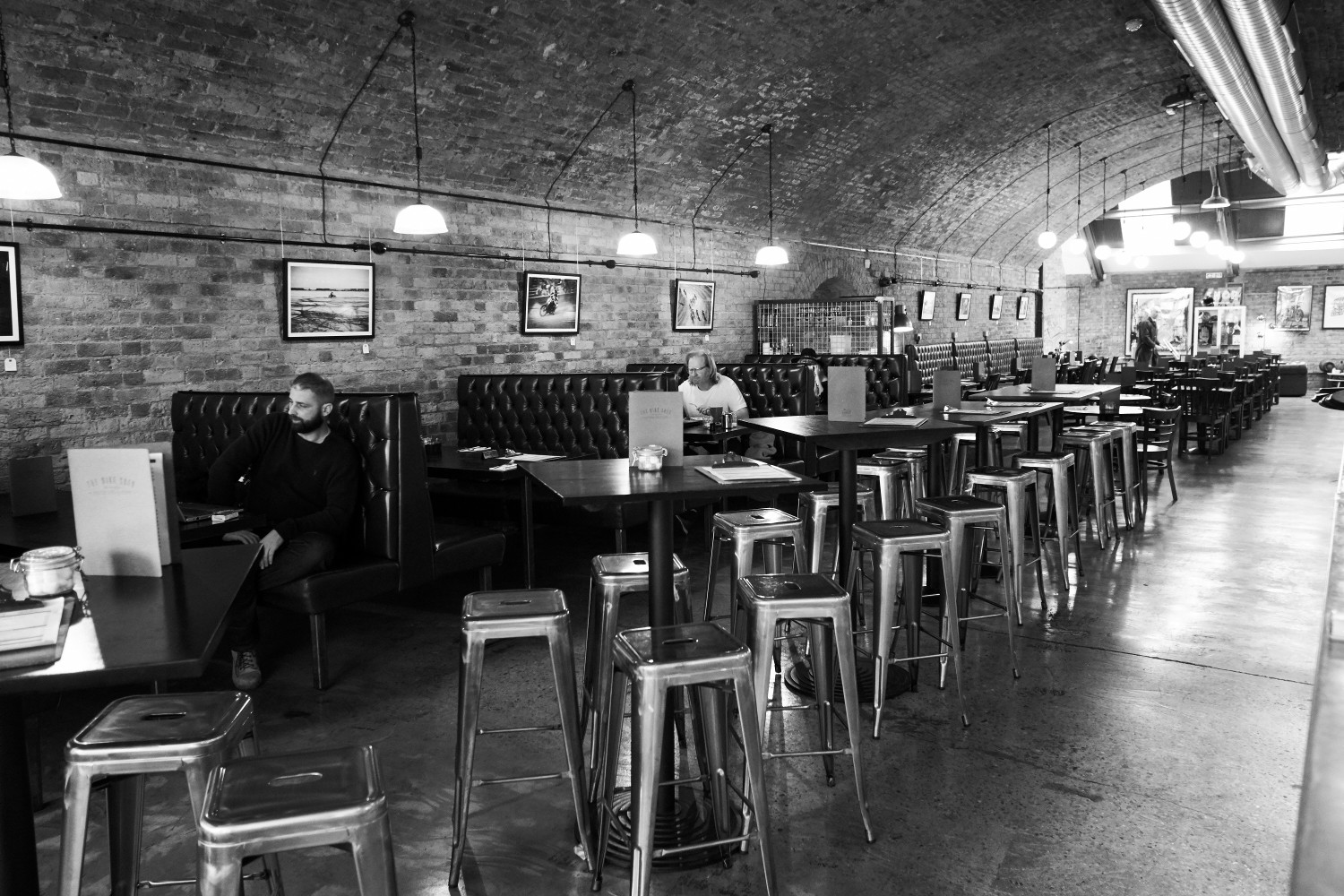 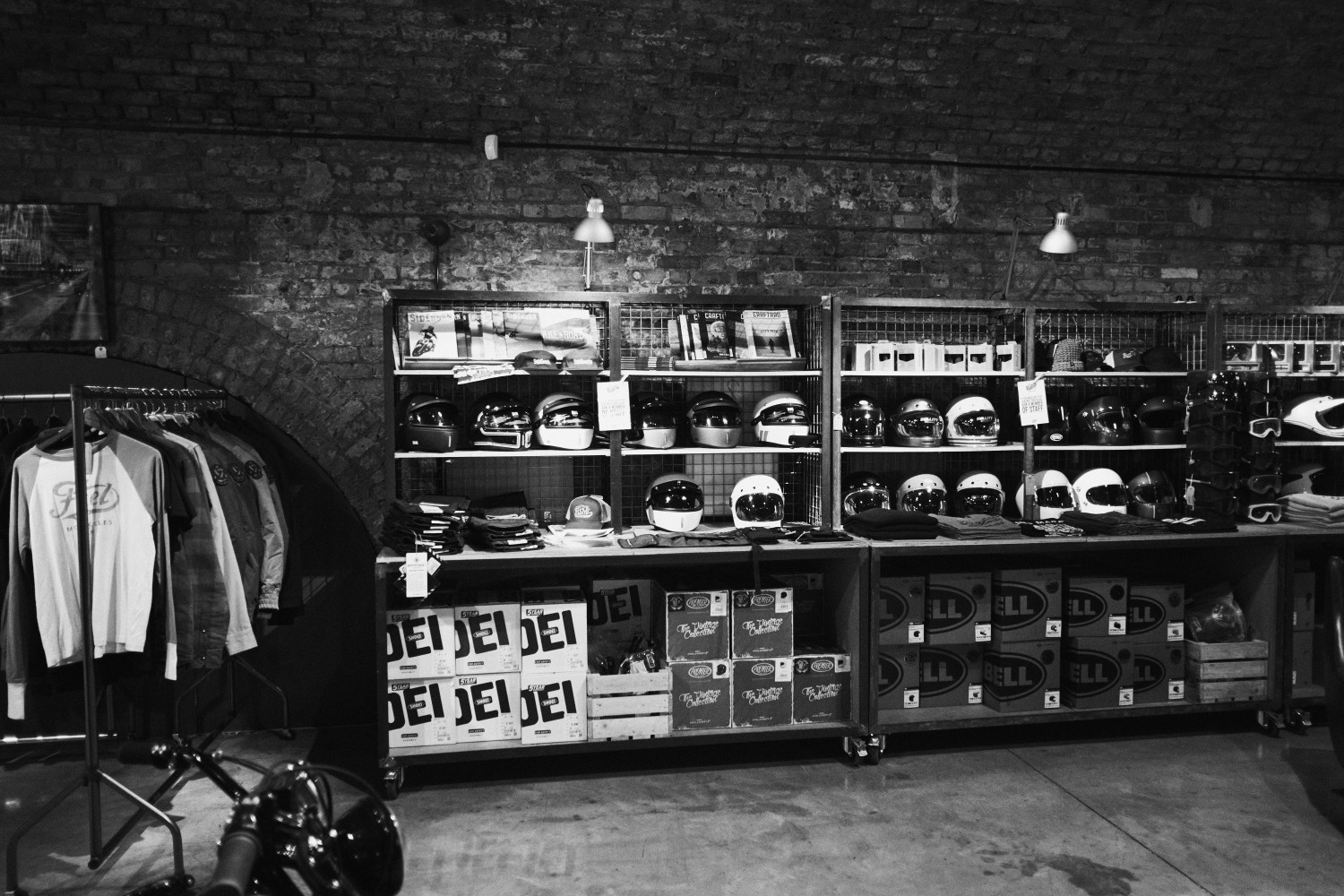 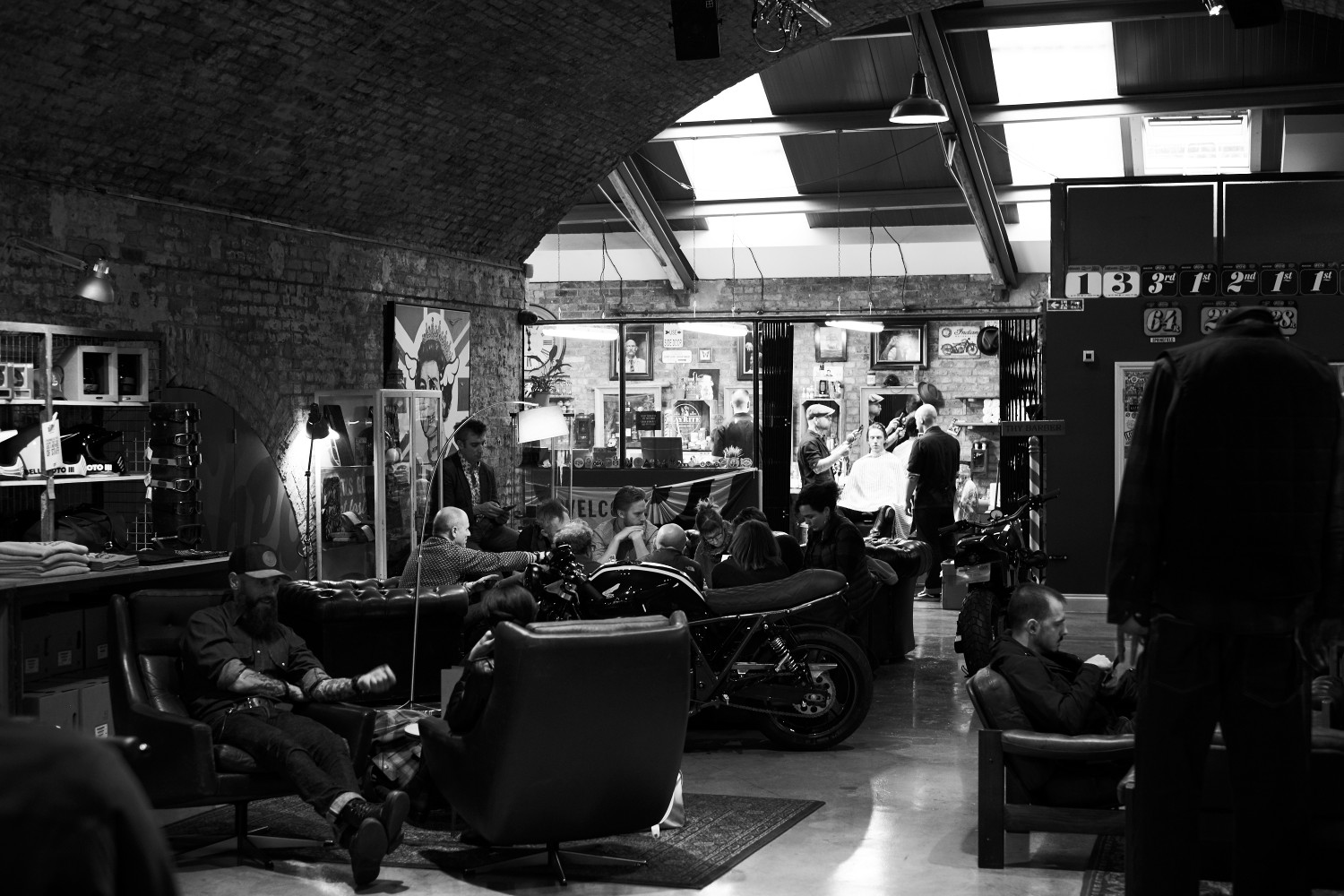 Among the custom jobs from several European brands we pleasantly find a 525 SM power plant sculpted, chiseled and taking pride-of-place. When we meet Dutch we not only discover a man with his finger on the pulse of what’s hot-or-not currently in the motorcycle industry, particularly the UK, but also a keen observer of what has been emanating from Mattighofen in the last fifteen years.

“I am a KTM aficionado,” he enthuses. “My first proper bike in London was a KTM 600 LC4, red, white and blue with battery lights on a Q plate. Kickstart only and no stand. I had to lean it against the wall! I lived in Camden and I don’t know why it was never knicked [stolen]! I learned to ride offroad on various things but then had an KTM LC4 650 SMC and then a KTM 950 SM, a KTM 990 SUPER DUKE and then a KTM 1290 SUPER DUKE R. I love em.”

Dutch is clearly a busy man. He has another show planned for May in London’s Tobacco Dock and a spot in Shoreditch that is growing in acclaim and has a roster of forty staff. He is still able to comment in a passionate way on the orientation of the bike industry towards more naked/custom/retro models and how that trend has helped push bikes closer to the mainstream. Simply looking at The Bike Shed Blog shows that he knows his stuff technically and aesthetically and naturally has an opinion on the burgeoning KTM street line-up. “They build amazing bikes but through the work of Kiska they are really polarizing. I loved the KTM 990 SUPER DUKE but when the KTM 1290 SUPER DUKE R came out I thought it was so ‘out there’. You cannot be wearing jeans and pair of Converse [trainers] on that bike. It has to be a dark visor and a full face carbon lid.” 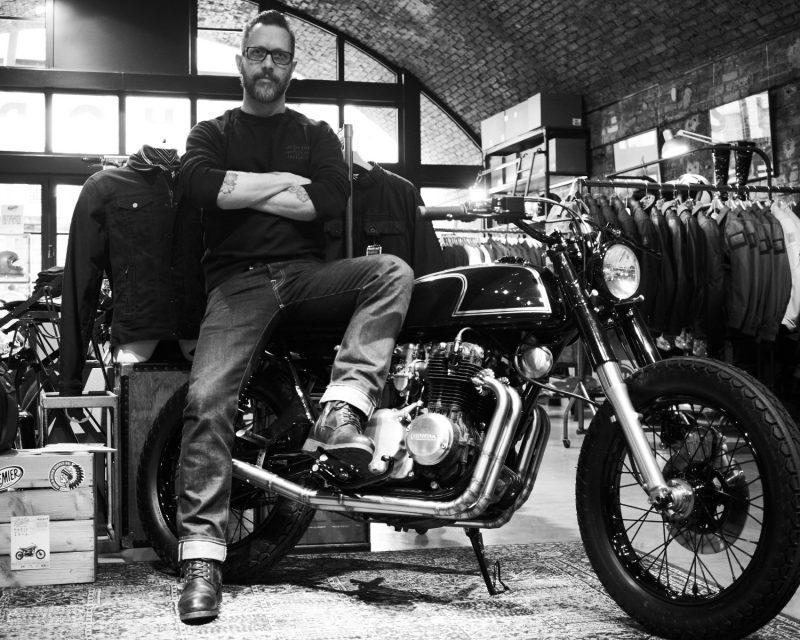 Street KTMs certainly cannot be accused of leaving people unmoved or undecided with their styling. “I was very excited to see the new KTM 790 DUKE at EICMA and I liked it,” Van Someren says. “I have a biker side to me – that wears weird things and rides very fast – and a regular side – the guy who is a Dad, was working in media, who is a husband. And I felt the KTM 790 DUKE brought those together a bit. The KTM [normally] is more for that ‘alter ego’. It is like sitting down with a PlayStation and becoming a character in Call of Duty. That’s what you do when you get on a KTM. You want to live up to Jeremy McWilliams and the R&D that he has put into the performance but on the other side who can live up to that anymore? They are aligned with that READY TO RACE image and they will always be amazing and ready to serve that niche.”

What underpins much of the work and vibe at The Bike Shed is a constantly evolving fascination in motorcycles and their many shapes and forms (Van Someren: “New things turn up and it doesn’t look like the last ‘new thing’ … there is not really an opportunity to get bored.”). And despite the diversity of what pulls into the yard Dutch doesn’t hesitate to get wistful on past horsepower. “The first SUPER DUKE was so rideable and usable,” he muses. “The best engine and the best fueling of any bike I’ve ever ridden was my KTM 950 SM … until they put fuel injection on it! I’d love a KTM ADVENTURE actually and if I was going across a desert then it’d definitely be on a KTM. The best bikes are still the 690s and the 950 SM was peak; 99bhp at the back wheel thanks to Chris at X Bikes that was it: job done!”

Sister brand Husqvarna prompts an eager reaction – “the 701 is a stunning piece of kit and the colors look epic” – but it’s a mark of The Bike Shed in general that the owner and manager who spends almost every waking hour in his Shoreditch haven is still brimming to talk about the motorcycles that move him. Visitors to the English capital would somehow miss out if they didn’t head down to 384 Old Street. 98 Responses to Finding orange in The Bike Shed