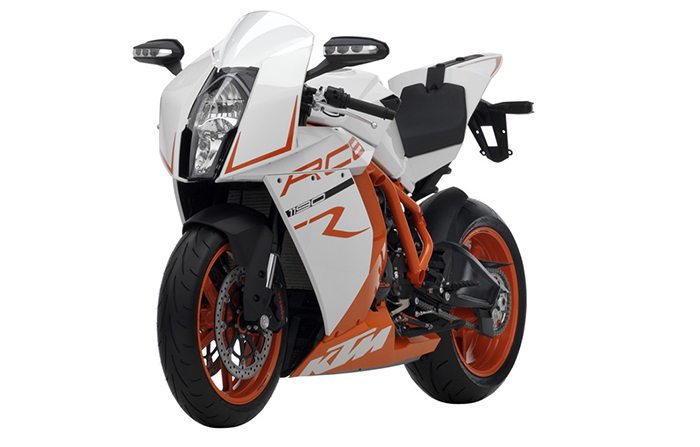 On the track, the RC8 was being raced to top five results in AMA Superbike by the likes of Chris Fillmore and even starring at the Isle of Man TT. In Europe KTM established a team to enter the competitive IDM German Superbike series. “The IDM was more-or-less a European Championship,” says Felber. “It was fully open for tire development and no restrictions on things like electronics.” The RC8 would go on to beat the competition. More important than results however was the chance for KTM to learn about road racing. It was a process that fed directly into their stunning Moto3 Grand Prix title-winning debut.

The RC8 was the ice-breaking machine that made the journey for Moto3 and thus MotoGPTM much smoother. “The IDM was an ideal playground to develop the bike but also people,” says Felber. “We raced for three seasons and it was extremely useful. We were learning a lot about tires together with Dunlop, and we won the title. We reached a level where we were able to tell [Magneti] Marelli how and what we wanted to change with our electronic software. That all fed into the new Moto3 project because it was clear that 2011 would be the last in the German Championship before all the people moved into Moto3. We had to start early actually, and I had to split people between IDM and Grand Prix. In the end we had a fully capable and working group for road racing.” 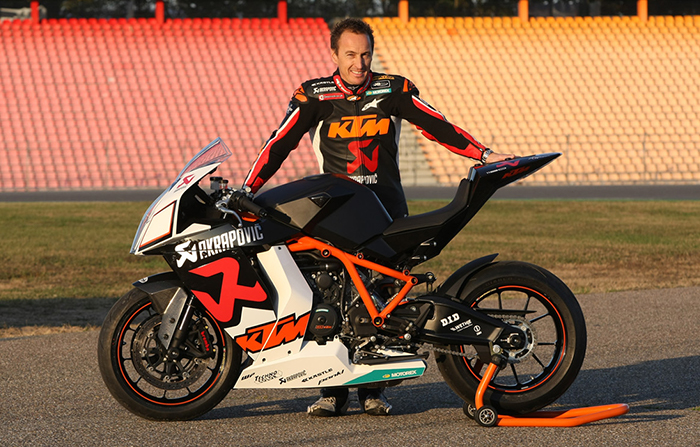 While the RC8 was being modified and chiseled in Germany McWilliams was also running a separate test program. “We got Jeremy on the bike after remembering him well from the original MotoGPTM project and still, to this day, he is fantastic to work with and still so fast with so much expertise over what seems like fifty years of racing!” Felber grins. “He’s loyal, honest and he’ll never talk shit.”

“To be honest it was a big surprise to jump on the IDM version of the RC8 with the full-on Magneti Marelli spec from the road bike,” he remembers. “The improvement in performance was an eye-opener. Whatever Wolfgang and the boys had done with the bike it had huge mid-range: It was incredible and pulled like a train. I still haven’t ridden anything like it to this day that makes that kind of torque and mid-range power. Wolfgang told me it was still only making 185-87 horsepower but it felt like 210; it was that good.”

As with almost every motorcycle there were imperfections and the rough waters around the development and production bore an influence. “We were aware that we’d need some good electronics on the bike, but due to the 2008 crisis there were thumbs on budgets everywhere and we did not get the chance to develop it in this term,” Felber says.

Journalists were quick to praise the RC8’s strengths upon its introduction but they also identified some of the quirks. “Idiosyncrasies? I guess the slightly rough gear change, and also those typically unmistakable looks, which I’m not sure enough people liked,” says renowned British bike tester Roland Brown. “And the fact that by sportsbike standards it was so comfortable and versatile, but I don’t think it got enough credit for that.” 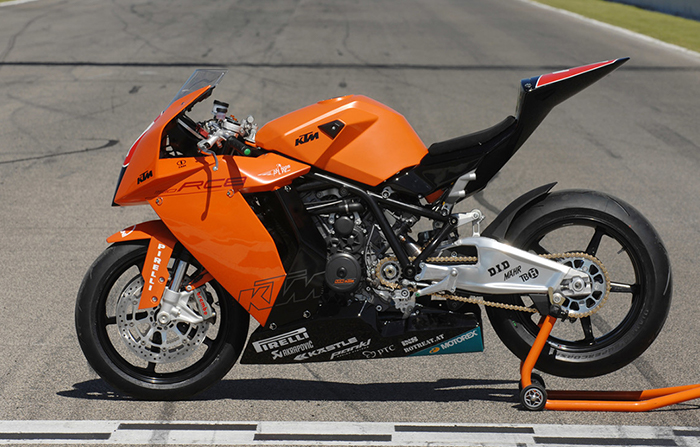 On the whole KTM had hit the mark. “I remember it was well received and I think it also sold well in the first year, especially in Great Britain,” Felber says. “I think 2000 bikes from the 2008 generation were sold there; that’s a sign that it was accepted by customers.”

Towards the end of the second decade of the century it is gaining almost cult status. Particularly as KTM indulge more and more in road racing. “I and many of the other journos thought it was very competitive with Ducati’s 1098, which is pretty high praise,” says Brown.

A competitive bike and a highly rated one: So why is the RC8 no more? The change in the WorldSBK playing field was the first ‘closing of the door’. Felber explains why: “The bike was planned as a 1000cc superbike. The engine was going to be a robust 1000cc capacity with the potential for enlargement over the years and this quickly became the case as Ducati forced the FIM to set the new limit to 1200cc. We were somehow on the wrong rail. The intake section with the throttle body dimensions was designed for a 1000. When we became aware that we’d need to beef it up to 1150 (initially) and then 1200 the deadline was already gone to increase the throttle body. This was one of the ‘birth defects’ of the RC8. It was not a disadvantage at all for the production bike – in fact it was a big help because with smaller units you get better gas flow and better rideability – but it always limited us in top power to enter WorldSBK.” 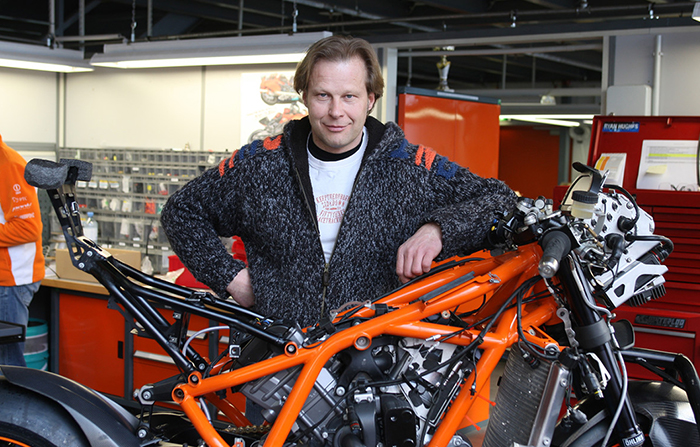 “There was a new version with new throttle bodies in the prototype stage, which at the time did 215hp, not too bad but we never got the release to switch it into production and have the proper base for world superbike racing,” he adds. “It was simply a company strategic decision in 2011 to go Grand Prix racing instead of WorldSBK because we could not do both … and it was the right decision. We were always very busy and were a small group so there was not too much time to be disappointed that we did not see the RC8 in World Superbike.”

As a track asset the RC8 had limited use, but surely there was a case for keeping it in the KTM portfolio? In the end the project fell afoul of other priorities and the allocation of resources. “I cannot really answer the question as to why the RC8 is not here anymore, but I can give a few points of view. KTM always ran an economic growth policy, so you had the small displacement bikes coming along, the new SUPER DUKE and many other projects. I think KTM simply had to choose where to put our R&D efforts and a SUPER DUKE or a smaller DUKE brings in more money and is more strategically important than an RC8. We have new customers. It was the better solution. There were also some comments from Mr. Pierer about the speed of Superbikes and they should just be on the track. I mean, a SUPER DUKE is also a fast motorcycle and in the end I think it was just a matter of resources and economic calculation.” 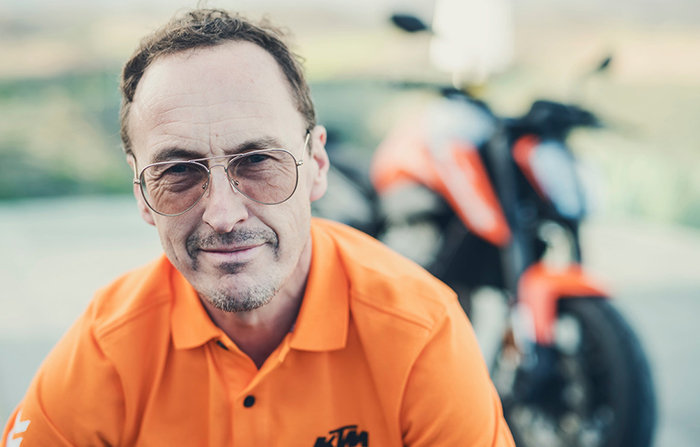 For those that rode or raced the RC8 the bike was missed. “I still think to this day it still stacks up against what other manufacturers do,” says McWilliams. “Of course, everything has moved on in terms of electronic wizardry but we would have done the same with the RC8. I got to ride it – the original IDM bike – again at the end of last summer and it brought home how good it was as an all-rounder. If we had the chance to make a 1290 with the same chassis I think it would be back up there as ‘one of the bikes to have’ in the garage. It was a shame that it wasn’t kept alive. I’m still hoping – as are some of the other guys in R&D – that it will be resurrected at some stage!” 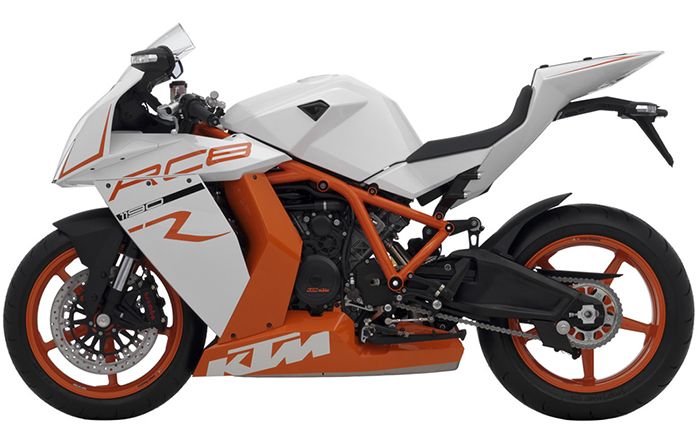 The RC8 was a technical, stylish and functional template for KTM’s road bikes and ‘accelerating’ racing division. It was also a memorable edition to the company’s history: Perhaps even the ultimate definition of KTM’s DNA to affect and move motorcyclists. “Given KTM’s amazing success since, I guess you’d have to say that Stefan Pierer got it right as usual and made the correct call to invest in other stuff rather than throw more resources at that rapidly shrinking market,” concludes Brown. “It would have been great to see them continue the development though. I guess it’s never too late to change his mind and make a MotoGPTM replica … ”

109 Responses to THE FORGOTTEN MASTERPIECE: THE RISE & FALL OF KTM’S RC8 SPORTSBIKE – PART 2