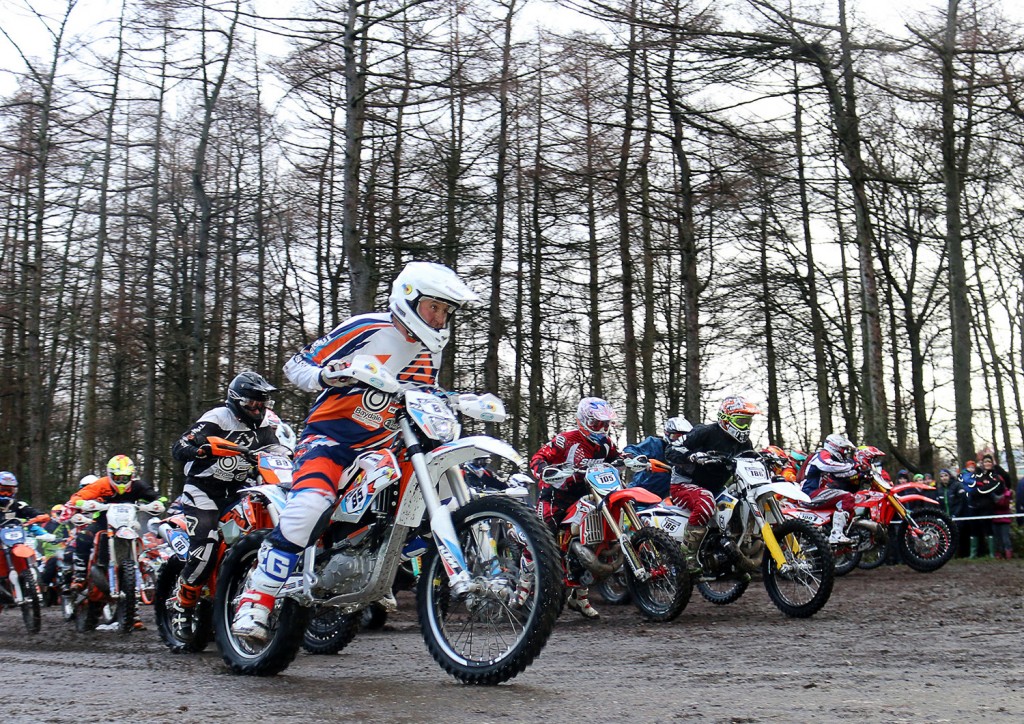 History was made recently for the electric-powered FREERIDE E range when British KTM dealer, Triple D Motosport Ltd, achieved a ‘World First’ for KTM when it entered and completed an Extreme Enduro event.

The setting was the first round of the British Extreme Enduro Championship, at the Parkwood Offroad Center, on January 10. Triple D’s dealer principal (as in, the boss), Neil Crayston, 50, has become such a staunch advocate of the electric FREERIDE that he chose to ride an E-XC version of the battery-powered machine in the the highly competitive ‘Veterans’ class. 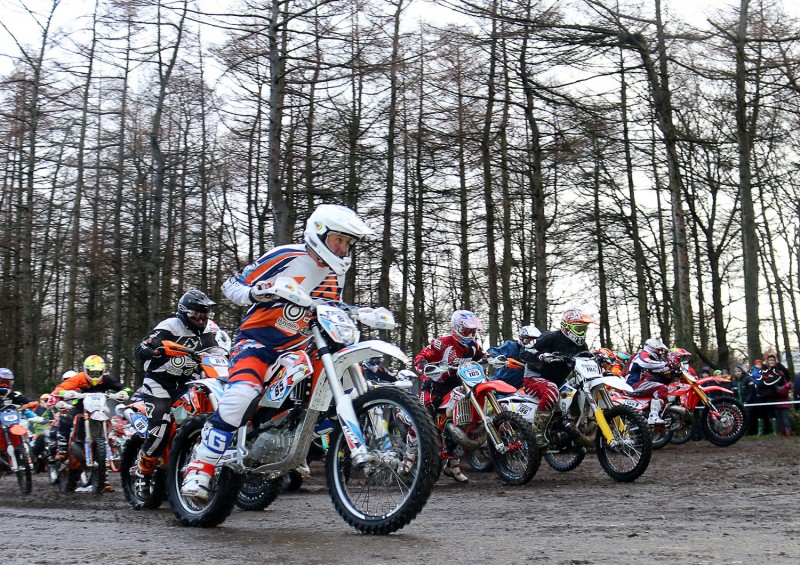 The Tong-based event is one the most spectacular Extreme Enduro events in the UK, providing thrills and spills as it pushes rider and bikes to limit the entire way. The riders have to tackle, rocks, logs, steep banking, streams and in some parts all combined together which proves exciting. And it was wet, muddy, a little cold and more than worthy of being called ‘Extreme’.

Just to stress that the course wasn’t easy, straight after winning the event, KTM rider and multiple World and British Enduro champion, David Knight, said: “Some people think Tong is not too hard. Let me tell you now, that was possibly the hardest course I have ridden in recent years. The conditions and the course changed every lap and there was absolutely nowhere to rest.”

And if Knighter said it was hard, it was HARD. But back to Neil …

With such a comprehensive capacity range of competition EXC bikes on offer in both 2 and 4-stroke (not forgetting the SIX DAYS editions), the slightly softer and fun-focused petrol and electric FREERIDE family was never designed for competition in mind. But this is motorcycling and riders will always want to use or race something not intended for that purpose.

“The great thing about the FREERIDE E is that it’s so slim,” says Neil. “So nasty, deep, long ruts are less of a problem. The ground clearance is also good and there are no foot controls to worry about hitting. And you can’t stall it! It does lack a bit of wheelbase length and the softer suspension can actually be quite helpful. I’m from a trials background, so I just adjusted the footrests on their mounting point to gain a ¼ inch of leg room and also push more of my weight to the back of the bike, therefore aiding with traction.” 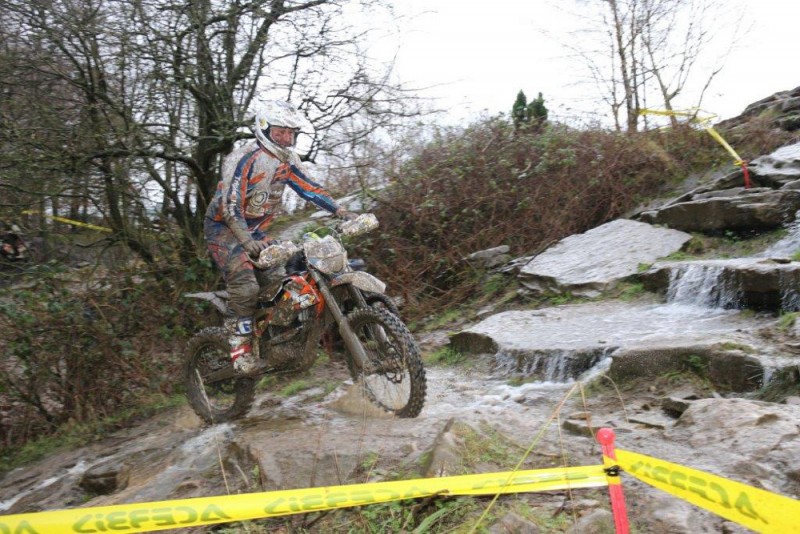 Other than that, Neil and his team didn’t make any other changes to the FREERIDE E-XC, just fitting a Golden Tyre Extreme Enduro sticky rear tire with a fairly firm mousse to easily deal with the mud and not sap precious power. On the front, a Michelin Enduro tire was used.

Fast charging the batteries out in the middle of nowhere was not an option without a very long extension lead or hauling a heavy duty generator along. Instead Neil and his team had discovered that a 2.6kVA portable motorhome generator could take a completely flat battery to full charge in just an hour. However, this wasn’t needed as they were able to bring together five batteries in total.

Neil got off to a quiet start (literally) and completed the two-hour event with an incredible finish of 27th from 119 riders in very challenging conditions, aided by a dedicated pit crew consisting of mechanics Ben Sayer and Sam Winterburn, along with wife, Maria.

Using a 2-stroke bike at the event might require just one pit stop and many of the 4-strokes machines will do the two hours without needing fuel. Neil chose to pit at the end of every lap – taking on a new quick-to-install battery after each time, making it five stops.

“The aim was to finish the event, regardless,” says Neil. “So I was being cautious about the battery. The average lap was about 20 minutes, but sometimes there was a lot of traffic or needing to take a different line and that would effect the battery power level. I wanted full power all the time, rather than trying to be economic with the battery, so I pitted often. The team got the battery change procedure down to F1-style efficiency.” 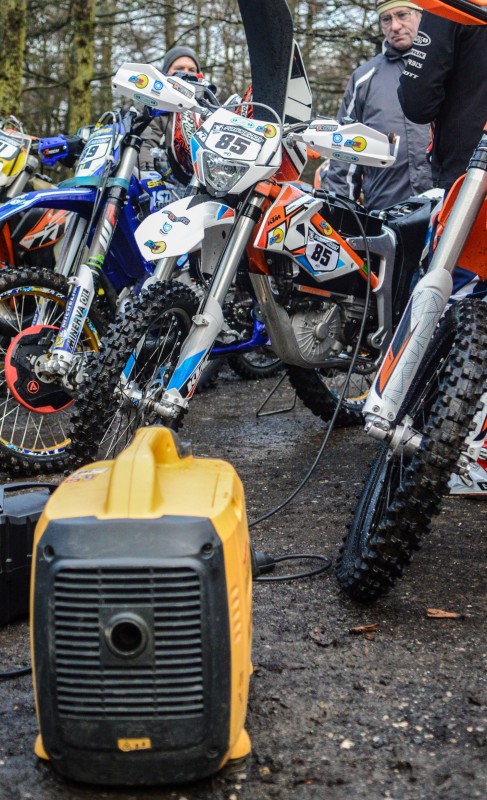 “In terms of riding the bike, the best thing is that it’s like being back on your pushbike as a kid with all the controls on the bars, making maneuverability – and skids – really easy!” Neil says as his face lights up. “I’m 50 years old and 15 stone and, I can tell, you that riding the FREERIDE E was easier in terms of skill requires and the physical effort needed to complete the course. I rode a petrol Enduro bike again after the event and the difference in just incredible. I never thought I’d be saying that I prefer the electric bike. You just get used to how easy the FREERIDE E is, especially with all the controls right at your fingers.”

I’ve experienced this FREERIDE E affect, too. My offroad riding has pro levels of enthusiasm but amateur amounts of ability; with less physically and mentally to do, the FREERIDE E allows more brain power to concentrate on the course or obstacle ahead. There’s no fear of stalling or being in the wrong gear.

“The technique for some obstacles requires a different riding approach,” adds Neil. “Like riding up hills with hops; you have to have the throttle on when you land as the bike will just stop with no available clutch slip to control it. So it is challenging, but in a different way.”

The experience has been to addictive for Neil who is planning to enter future rounds of the British Extreme series, but this time plans not to be so cautious with regards to the power packs. 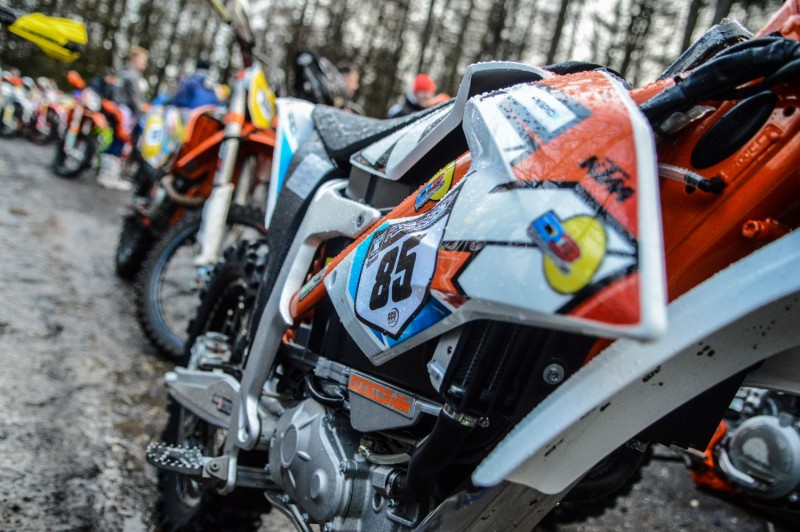