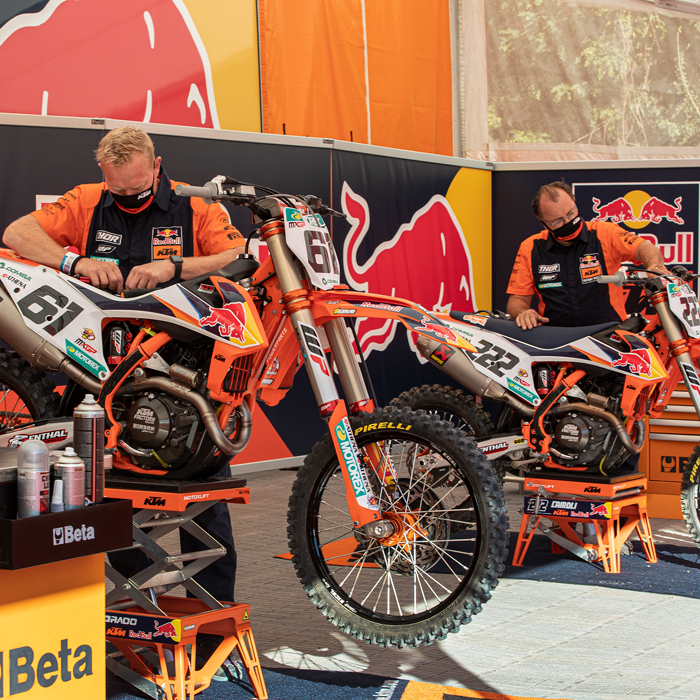 GETTING IN THE GAME: BECOMING A MECHANIC IN MXGP – PART 1

How do you get to the very top of motocross? Do you have to be a technical genius? Lucky? A boisterous team player? Or well connected? We asked the Red Bull KTM mechanics for their stories…

Red Bull KTM have won both classes of the FIM Motocross World Championship in the same year seven times in the last decade with largely the same technical crew and band of experts both at the circuits and back at the Motorsport HQ in Munderfing. The team can rightfully claim to be one of the very best in Grand Prix. Behind the riders and champions like Tony Cairoli, Jeffrey Herlings, Jorge Prado and recently crowned FIM MX2 Motocross World Champion Tom Vialle is a diverse spread of race mechanics: some of whom who have been on the spanners for more time than the riders have been alive and others who have come into the squad and made an immediate impact.

In a quest to understand how two Australians, a Belgian and an Italian ranging from their mid-twenties to their late fifties came to be the cornerstone of a KTM racer’s weekend, we ventured (with a facemask and at a safe distance) into the MXGP awning.

Any visitor to an MXGP paddock and Claudio De Carli’s team in the last fifteen years might have spotted a small bespectacled Italian quietly prepping the #222 machine. Properzi has been part of De Carli’s unit from the early 1990s and remembers when they decided to take a chance on a skinny 18-year old teenager in 2004. “Tony was a kid that really wanted to work and had the right attitude to get results,” ‘Nazza’ says. “We knew of him because he was from Sicily and there were not many riders from his country in the Italian championship. He was unhappy and about to quit motocross after his first international season in 2003 but a friend of Claudio’s – a former racer – that said we should give him a chance. We made a test at Malagrotta with one of Claudio Federici’s bikes and then we started the journey.”

Properzi initially aligned with De Carli after working in a motocross and enduro workshop in Rome. The bond between the two extended from the race team’s humble beginnings with Federici in the European Championship, to world titles with Alessio ‘Chicco’ Chiodi, through the Cairoli era (six crowns in KTM colors) and into the present day where the union is trying to grasp that amazing record. “My motivation is still connected to winning,” he reveals. “I want ten titles with Tony and cannot stop until he does!”

Properzi has seen a shift in his work over the years and as De Carli became an integral part of the Red Bull KTM structure in 2010. Factory status meant responsibility for the bike became wider and shared between groups such as WP for suspension and chassis configuration. Instead of being a custodian for every part and component of the motorcycle, a mechanic’s role became more defined. This was not necessarily a bad thing with MXGP growing to a globe-trotting series of 20 rounds. Properzi thinks that the travelling demands of working in Grand Prix could act as a deterrent for some who dream of filling the same role as him and the 3-4 other technicians in the team. “I don’t see much interest around now from people to do this job,” he admits. “If you want to do it then you need to be ready to break links with the family and home at an early age. There are some people that can do this…but it’s a big change in the lifestyle. I would also recommend starting with a small team, learning all about the job and growing as a professional. Then you will know if it is for you.”

At first sight the pairing of Bart Dirkx and Jorge Prado seems an odd match: one of the older mechanics in the MXGP class spannering for the youngest racer in the category. But the Belgian and the Spaniard have a strong link that predates their GP union that has been active since 2018. Dirkx has been present in the MXGP paddock for more than 15 years and actually worked for Red Bull KTM Factory Racing previously as the mechanic for Max Nagl. He followed the German to IceOne Husqvarna but returned to the De Carli side of the awning for Prado’s second Grand Prix year and the first of his two MX2 title campaigns.

Dirkx was Prado’s first mechanic when he moved from Spain to be based in Belgium as a KTM Junior rider working through the ranks. Nagl had a back injury that kept him out of racing for seven months. Dirkx’s open attitude led to him working for a prepubescent Prado when he was racing a KTM 85 SX in the European Championship. The Prado family even stayed at his home for a month as they waded through EMX competition. Dirkx then returned to Nagl’s side once his ‘Pro’ racer was fit.

“Many people at the time said: ‘what do you think of this kid?’ and, even then, I was saying: ‘he’ll be a world champion one day for sure’. He could really ride a bike. On the 85 he was the smallest kid of the group. At 12 he was racing guys who were 15. Unbelievable starts, even back then. When Max started riding then we went our separate ways and I remember Jorge crying about that because we had such a good bond.”

His break in motocross came when he worked for a young amateur racer and saved the day at an international event in China where his rider was representing Belgium at Under-17 level. “On the first day he broke the crankcase,” he recalls. “It was a 250 four-stroke so I had to take everything apart. I worked all night and by the morning we had it running again. We finished all three days with that same bike. It was a tough job. I didn’t have the tools with me that I would have had at home. It was an adventure. When we came back the news got around the small racing community that I kept the bike running and I had some more calls. One of those was to work for Claudio de Carli’s team.”

Dirkx warns of the misconception of the job. “From the outside it looks nice, but it really isn’t easy. It looks glamourous and a lot of fun it is also a lot of work and commitment. Races, tests and practice. You start as a practice mechanic normally. But there is a lot of build-up and a lot of driving. One year with Max Nagl I did 22,000km in the van before we even started the GP season! It is important to find a balance.”

Like his coworker, Dirkx encourages wannabe mechanics to get the best grounding possible before aspiring to the top level. “Working for a small team can be interesting because you are very hands-on with all aspects of the bike and build-up the knowledge and the experience. But you’ll also need to have a basic base and that can come from schooling or from working on engines from a young age. Some people can come into factory teams at a young age…but you still need all that experience behind you, and a good contact!”

It’s an intense yet exciting life to be a mechanic at Grand Prix level and every team member has an individual story on how they ended up travelling the world, passionately working with some of the best riders on the planet. We hear the unique stories from the mechanics of Jeffrey Herlings and recently crowned FIM MX2 Motocross World Champion Tom Vialle in the second part of this blog.

2 Responses to GETTING IN THE GAME: BECOMING A MECHANIC IN MXGP – PART 1