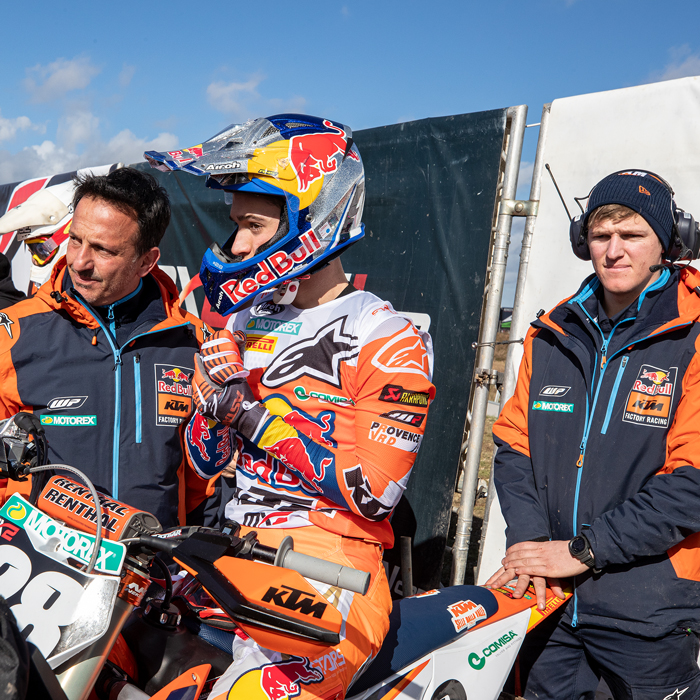 Getting in the game: Becoming a MXGP mechanic – Part 2

Travelling the planet and working with some of the most insanely talented racers to chase world championship glory is a career many would dream of; but just what does it take to become a mechanic for a rider like Jeffrey Herlings or recently crowned FIM MX2 Motocross World Champion Tom Vialle? For the second of two parts to this blog, we caught up with Red Bull KTM Factory Racing’s Wayne Banks and Harry Norton, who both have moved halfway around the globe for their jobs as factory mechanics …

Australian Wayne Banks entered Red Bull KTM after working for the satellite Hitachi KTM team and a smaller structure. He began in Grand Prix in 2009 and has been part of the factory crew since 2012. He’s currently the only mechanic in the group to win titles with two different riders (Jordi Tixier in 2014 and Jeffrey Herlings). For Wayne the path began locally. “I was an apprentice at a bike shop at home. My service manager was a racer beforehand and knew people as part of the scene. It was just luck and timing that I went for the interview and got a job,” he explains. “I personally believe it is better to come from the practical side of things and having done the hard work and gained that experience. Although I can appreciate people who have studied and taken the time to get theory under their belt as well.”

It’s a long way from Australia to the European hub of Red Bull KTM’s Austrian workshop and the Belgium-based extension. The FIM World Championship is also largely European centered. Banks was able to make the continental hop thanks to his amiable character and the contacts he’d made as a result. “There was an Australian mechanic in Europe working for another Grand Prix team and there was a job opportunity. I flew over and needed to settle in the first month because I had never been overseas before!”

“The people that you know are crucial and it means that you can find out where and when opportunities will come up,” he adds. “When you get to factory level then usually it is a small group and you have to wait for a gap to appear and then decide if it is the best move for you. Some teams change mechanics quite frequently whereas others really take atmosphere, personalities and working relationships into account and the staffing remains regular for quite a few years.”

As the latest member of Red Bull KTM Harry Norton had to move from his employment with KTM Australia in Sydney, immigrate and gel with a Grand Prix rookie all within the first months of his new job. His connection with Tom Vialle is one of the freshest and youngest in the KTM Motorsport department but it has had an instant sway. Success has come quickly for Vialle and Norton, but the Aussie had to walk the long ground beforehand…and also be handy with some cooking tongs!

“I raced Enduro when I was young,” he says. “I come from a little town in Australia. I did some work experience at the local KTM dealer when I was 15 and the shop offered me a job based on that week. I did a four-year apprenticeship there which would be the equivalent of a mechanical school in Europe. So, I picked up knowledge through the apprenticeship scheme and then through building my own stuff for racing as well as being in the dealership every day. My main job there was diagnostics, and I was leading a team of three people at quite a young age. I got to see a wide variety of issues and servicing for many different bikes. A dealership is not like a racing environment where you are working on the same bike every weekend: we had everything from a KTM 1090 ADVENTURE to a 250 SX-F. If you understand a mechanical item then you know how to problem-solve and think mechanically.”

Norton then devised a plan for where he really wanted to be: MXGP. “Every year the national motocross series would come to my home state just for one race. The Technical Director for KTM Australia was a guy called Rob Twyerould. I called him when I was 16 and asked if I could come to the race to hang out and meet people and see how it worked, so for four years I cooked the BBQ for the factory team! In the fifth year they offered me a job and I moved from Adelaide to Sydney. That’s when I started to work in the motocross and enduro team. Over lunch one afternoon I said to Rob that I’d love to go to Europe. I wanted to continue my evolution and to learn and experience new things, preferably as part of an MXGP team. I knew he was going to Austria and the factory the next week. I think it was across the weekend of the Motocross of Nations at RedBud in 2018 when Dirk [Gruebel, Red Bull KTM Team Manager] called me and said he’d seen my resumé and spoken to a few people about me and offered the chance to come to Europe. Three months later I was in Austria!”

“The history this team has…It’s arguably the best in the paddock. I’d never been to Europe and never met the team. I didn’t even know who Tom Vialle was! In a way this was quite good. I didn’t have any preconceptions or notions of what Europe was like. I came in with an open mind. As a kid this job was the dream. I had a picture of Ben Townley on my wall in 2004. I remember thinking ‘that’s where I want to be…’ I come from a very small town so to have the possibility to come to Europe and do this job is crazy.”

Again, the combination of work, a diligent attitude and proactivity to make contacts paid off. “I was lucky enough to work with Rob on the technical side and as an apprentice. He got me into the KTM Australia role and then he is very good friends with Dirk and had been going to the factory for 18 years. Without him it would have been a lot more difficult to be here,” Harry says.

Like Properzi, Norton believe there is one trait that is essential for doing a job that many crave but not many understand or are ultimately prepared to take on. “I was so passionate about dirtbikes in general,” Norton summarizes. “My life was – and is – all about them. So, I would say to anybody else wanting to be in this position: keep that passion, take opportunities and show that you are willing to do the small work and do it really well. Passion shows through above everything, always.”

6 Responses to Getting in the game: Becoming a MXGP mechanic – Part 2