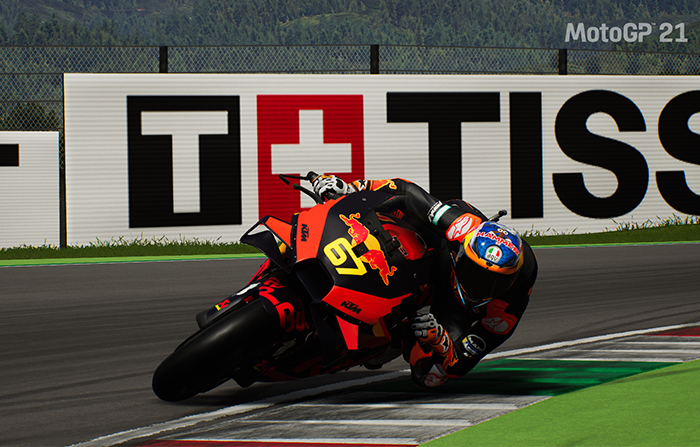 GETTING REAL: THE DEMANDS OF MOTOGP™ ESPORTS

The real – and the virtual – 2021 MotoGP™ World Championship finishes in Spain in mid-November. Valencia is a traditional curtain-closer for the series, but it’s also become the site of the tense grand finale for MotoGP eSports. Is the gaming competition harder than you think?

MotoGP™ eSports has reached a fifth year of existence in 2021. The competition has captivated a hefty audience across the globe – as well as the commercial curiosity of the actual MotoGP™ race teams and brands – for several reasons.

Firstly, there is the game itself. ‘MotoGP™ 2021’ is produced and refined by developers Milestone who have been custodians of the title on platforms like PlayStation, Xbox, Windows and Nintendo Switch for almost ten years. Eight editions from 2013 have increased realism and playability as well as accuracy. Secondly there is the high rate of connectivity between gamers from Chile to New Zealand which means it is easier to engage with others than ever before. Thirdly, the rapidly growing interest in eSports is creating big participation numbers and spectators as broadcast networks figure out how to make the competition an entertainment package and relate it directly to what people are doing in their living rooms and bedrooms. Being a professional ‘gamer’ and part of a syndicate that targets various contests to grab a slice of the booming funds on offer can now be considered a serious vocation.

The MotoGP™ eSport Championship works through a Draft Selection of four ‘challenges’. The best/quickest 22 players from this cull go through to the Pro Draft (where the top three from the previous year are also classified) and the 11 official MotoGP™ teams then choose one player and one back-up as their ‘digital’ racer for the Global Series.

The real MotoGP™ calendar totals eighteen Grands Prix but the eSports agenda involves four rounds of two races each and held across eight different tracks. To-date Portimao, Mugello, Sachsenring, Red Bull Ring, Phillip Island and Misano have all taken place with the participants wired remotely. The fourth and final instalment occurs at Valencia where the gamers will be onsite at the Ricardo Tormo Circuit to race the same course, and also the Circuit of the Americas, to see who scoops the prizes. A new BMW is the top accolade.

For those of a certain generation it’s hard to comprehend quite how difficult gaming is at this level. Like any activity, it’s repeat practice that helps create proficiency. Playing also requires sharp hand-eye coordination, quick reflexes, and fierce concentration; traits that the real MotoGP™ riders also need. Gamers won’t have to worry about the physicality of steering a 350kmph motorcycle, any of the elements, forces and – of course – danger, but they do need intense focus to perform because the virtual races are also split by fractions of a second. In the same way that MotoGP™ have different race bikes each year and a different feeling with the Michelin tire allocation, digital riders have to handle a variation of the ‘MotoGP™’ game physics.

“It’s really hard because the game changes each year,” says Tech3 KTM Factory Racing’s representative Matteo Mazzucchelli aka ‘DarkBright’. “I felt really good with the 2019 version and the 2020 one also – that’s how I was able to enter the 2021 Global Series after three years of trying! – but for 2021 it changed a lot. Before you had to brake really hard, get into the corner and accelerate very hard. Now you have to be more calm, more smooth. That’s not really my style so I really had to adapt.”

“I was one of the strongest around Portimao,” explains 18-year-old Briton Jack Hammersley (‘JackHammer4658’), competing for Red Bull KTM Factory Racing “but then they updated the game physics around two months ago and the bike now feels really different. It’s hard to describe but the rear is much more loose. I don’t really have that advantage there anymore and I’m still trying to make it up.”

Mazzucchelli, 27, is based closed to Milan and says that he plays 5-6 hours a day when he’s home from his Monday-Friday job in economics. He usually makes 10-12 hours or more at the weekends or holiday days. “It’s my passion,” he says. All that time is not dedicated solely to racing games and MotoGP™ (the real sport of which he is a big fan) but he acknowledges that a form of training is necessary to make it. “’MotoGP™’ is pretty easy to play but it’s hard to master…especially because many other people are out there giving 100%.”

Hammersley takes a slightly different approach. “I’m about to go to university but I’ve been playing since I was four and I’m really into racing games. I quite relaxed about when I practice ‘MotoGP™’. I think it’s important not to do too much, so you don’t get burnt out or lose motivation. I’ll play every two days, and then before a competition I’ll obviously do a lot more.”

The youngster stresses the need to get serious with the practice though. “I can jump on the game and be 0.2 of a second from my personal best but sometimes you can be one second off; it takes a good 30 minutes of playing and ‘warming-up’ to be where you want to be. You have to play with the settings and look around to see how and where you can find the feeling for those better lap-times.”

Even without the limitations of the pandemic that confined many people to their own apartments and houses in 2020, eSports was already growing. Last year, video content from the MotoGP™ eSports competition were watched almost 16 million times and had more than 2.5 million engagements.

JackHammer4658 and DarkBright can aim for recognition, and the prospect of some new BMW car keys (although both are currently 7th and 8th in the championship standings respectively) but the bigger picture would be a route into being a professional; it’s another way in which they can be similar to their real-life counterparts. “That would be my dream!” says Mazzucchelli. “I really want to be a professional gamer but it is very hard to give up your job to start. You have to succeed rightaway or you have nothing.”

“I would love to have it as a career,” opines Hammersley. “But I think it takes real dedication and it’s something where you need to keep going and going. I hope MotoGP™ can push up to the level of F1 in the future. It seems really professional there with a lot of involvement from the teams. It’s growing and maybe MotoGP™ will go in the same direction as well.”

5 Responses to GETTING REAL: THE DEMANDS OF MOTOGP™ ESPORTS