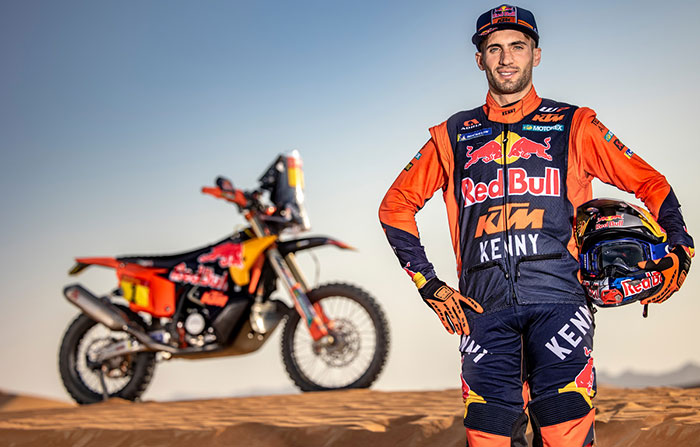 Getting to know Kevin Benavides: The Dakar champ talks about life, training and Dakar

Kevin Benavides is ready to take on the world’s most notorious race again this January with the Red Bull KTM Factory Racing team. The reigning Dakar champion, who hails from Salta in Argentina, has been getting to grips with the KTM 450 RALLY with his first competitive outing in Morocco in October, and now has his eyes on the ‘big one’ which is edging ever closer. We caught up with Kevin recently to find out more about rally life, home life, running a KTM dealership and racing for KTM.

“I’m 32 years old – my birthday is always during Dakar on January 9, which is good but I always miss making the parties! We have to do it after (laughs),” says Kevin. “My home is in Salta, which is one of the most popular cities in Argentina and it’s in the North. It’s really beautiful, with a lot of mountains and I love it there. It’s also quite famous as the Dakar was there for a lot of years from around 2009 and there was always a bivouac there. The local people really love the Dakar,” continued the KTM racer.

Kevin’s passion for motorcycling came predominantly from his father. He started riding from a young age, although he explains his parents never pushed him. His father raced to regional level, as well as a mechanic on bikes where he fixed them up for selling, but Kevin had a dream to be a professional.

Kevin explained how he always watched the Dakar, but as a multi-time enduro champion, he was always so focussed on enduro it was not particularly his thing. In 2013 Mariano Casaroli who ran a team in Argentina asked him to try the rally bike, but Kevin was sure he wanted to stay racing enduro. In 2014 and 2015 the question came again; the Dakar in 2015 was in the Salta area and Mariano had a rider who was out of the race, the bike ended up at Kevin’s house. He was asked to test it – still not convinced about rally riding, he did, and the rest was history. Kevin’s brother, six years his junior and also a Dakar rider, would follow in his footsteps and today they are both at a professional level.

“When it came to rally, yea I wasn’t convinced, but from the first moment (on the bike) I felt so comfortable and I thought, yes maybe I need to try. After that I found a link with a manufacturer – I had conversations with KTM at the time, but there were no places in the team. I finished racing enduro in 2014 and started with rally in April 2015. My first race was the Ruta 40 – I had a lot of help, then I did two races more. I won in Paraguay and that gave me the entry for the Dakar.”

“I had a bike to go race in Morocco, and as always, all the top riders were there; I finished fourth there in what was my first international race. Then in 2016 I jumped to my first Dakar. I said ‘okay, try to finish in the first 20 and it would be really nice’. On day three I won my first stage, in Argentina, it was crazy. I was the first Argentinian to win a stage at the Dakar. It motivated me a lot. I finished fourth in my first year, it was like a dream,” continued Benavides.

2021 marked a big change for Benavides, as he made the switch to KTM. He is passionate about the brand and Red Bull, and for him it was always a goal to ride in orange. As the first Latin American to win the Dakar, which he achieved earlier this year, he’s set his sights on being the first rider to win the Dakar for two brands and is now fully settled with the Red Bull KTM Factory Racing team and aboard the KTM 450 RALLY.

It’s also interesting to note the racer – whose motivation is infectious – previously studied business administration and runs a KTM dealership that he started at home in 2013, which has been growing since.

“KTM is an amazing team, with a lot of experience, and everyone inside the team is really nice – I have a great relationship with everyone. With the decision to go there, well I could have stayed in my comfort zone, but I really wanted to challenge myself and in my heart was the KTM brand. I knew it would be good for me for the future. We do have a KTM dealership back at home, but that’s not the first reason – it’s in second position, and of course it helps, but I am so happy to be with KTM.”

As an Argentinian that’s influencing the South American dirtbike scene, it was interesting that most of Benavides’ ‘heroes’ growing up were riders such as Juha Salminen and Antoine Meo in enduro, Antonio Cairoli in motocross, and Paulo Goncalves in rally (mostly former KTM champions). He knew as a young rider from South America it would be difficult to be noticed and break into the European scene to follow his dreams. Thanks to the Dakar, MXGP races in Argentina and riders such as Kevin, his brother Luciano, Pablo Quintanilla and others, young riders from this area of the world are aspiring to much higher levels these days.

“I knew ‘I am from Salta’, not in Europe. I followed more the European riders at that time than US. I think I could arrive because I was so persistent, and I fought a lot for the recognition. I was the first guy from here to the Enduro World Championship too – and unless you’re there it’s hard to be recognised. Normally, back then when you say you’re from South America it was quite negative for the teams, but now we really showed good riders from here. There’s a lot of South American riders that are a really good level and we want to show the world that. It’s also good for the next generation – there’s lots of kids that want to grow and have said they want to be like me, which is so nice and something I’m proud of,” continued Kevin.

When it comes to home life and training being in South America has a lot of advantages as a rally rider with the available riding terrain. A strict schedule of waking at 7.30 to 08.00 – ‘our tradition is going to bed more late..,’ says Kevin – means a comfortable morning start before cooking breakfast and hitting the gym. A personal trainer puts him through his paces before lunch, and then the afternoon is filled with something aerobic like cycling, rowing or ski. Running isn’t normally on the agenda, but a session riding enduro, motocross or rally is usually planned.

As we head towards Dakar and with the development of the new KTM 450 RALLY, touch points with the rest of the team have been more regular with testing in America, Rally Morocco and Dubai meaning Kevin has been travelling more than at home. Now he’s back at his base, sticking to his regime with a schedule of physical and mental training to arrive at Dakar in the best way with the help of his mechanic, road book preparation helper, fitness trainer and psychologist. Away from the hard work, Kevin likes cycling and mountain biking – which is part of his program – as well as cars and watersports with jet skiing and wakeboarding on a lake close to home. ‘Everything adrenaline I like!,’ he exclaimed.

When training, Kevin explained it’s helpful having a rally riding brother. Training together means they can push each other and out on the bikes – more importantly – look out for each other. Kevin explains the hard part is at the races knowing his brother is racing too, but psychological training is important so he can focus on the job he needs to.

“Me and my brother train a lot together and this is really nice, as we are just so competitive. If I make 10 push ups, he will want to do 11 so on the next round I will make 12! We make it fun, but also on the bike we can push a lot. Although on the negative side when you race it’s quite hard. We manage a lot, we train for that part with a psychologist, it’s not easy when you’re racing with your brother, you know.”

“In the rally race it’s not like a motocross or an enduro where you know almost everything (about the track). In rally you never know so when you pass some danger, you automatically think – I think of my brother and how he will pass. When you finish you always want to make a check on how your brother is and if he arrived okay. I guess it’s complicated, but we are professional, we enjoy a lot and also I believe in him a lot. He trains like me, he is really prepared but that element is there that makes it more difficult than other sports. In Dakar everyone really takes care of the safety and rally riders are also taking care of each other. We have a lot of fun together.”

Kevin will be making the final preparations for the Dakar, which begins with a prologue on January 1st ahead of two weeks and approximately 8,000km of racing, where he’ll be aiming for victory aboard the KTM 450 RALLY. We’d like to wish him and teammates Toby Price and Matthias Walkner all the best for bringing back the Dakar crown.

11 Responses to Getting to know Kevin Benavides: The Dakar champ talks about life, training and Dakar